Disclaimer: I promise I'll be finished blogging about London by the year mark!  There was nothing on our "must-see" (tourists!) or "must-eat" (vegans!) lists for nearby The Third Estate, but we spied Bumblebee Natural Foods as soon as we turned onto the street.  It was only a few doors down from our destination, so we figured we may as well stop in for a nosh.  It couldn't hurt! 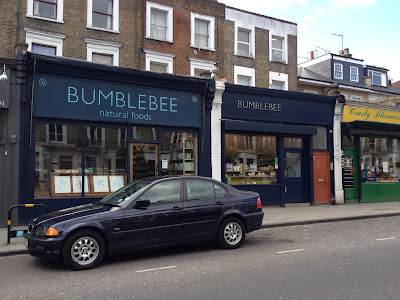 There are actually three separate Bumblebees in the same vicinity: two one side of the street (but not connected): "the bakery" and "the veg shop," and one across the street: "the nut shop."  We spent most of our time in the bakery (duh): that's where you'll find "breads, cakes, pastries, cereals and flours, biscuits and baby foods, grains and breakfast cereals."  They also had a prepared food section: both hot foods and salads, as well as snacks.  Although it was of no use to us, this is also where they also had a frozen section.  And what they call "free from" products (i.e. gluten, soy, nuts, animal products).  The veg shop was mostly organic fresh fruits and vegetables, organic dairy (gag), household items, and herbs & spices.  And the nut shop was mostly bulk food, packaged items, and supplements (if I recall correctly).  Apparently they've expanded non-traditionally as they've grown. 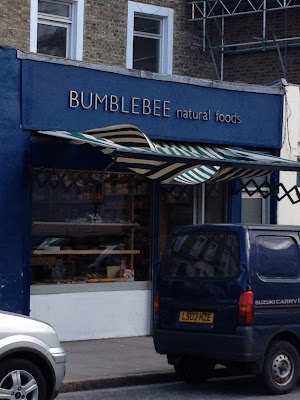 So, yeah; Bumblebee is not vegan.  In some instances they were very vegan-friendly: see the vegan chocolate section here: 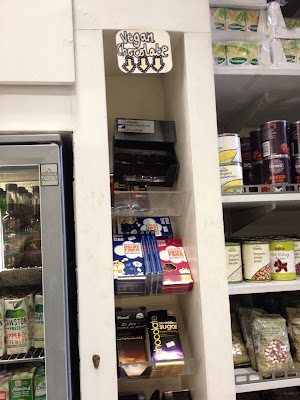 In some sections a little less-so: the hot and prepared sections weren't clearly marked and they didn't exactly relish our inquiries. 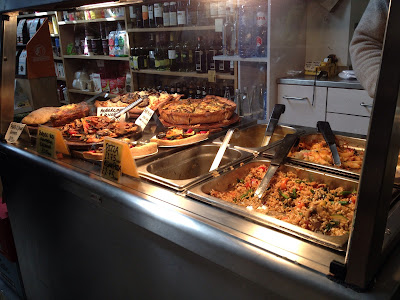 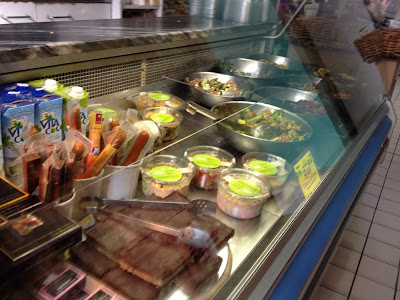 As for the actual baked goods: nothing was marked and after asking separately about the ingredients in 5 items without anyone taking the initiative to just tell me what was vegan, I gave up.  Vegan-friendly doesn't necessarily imply actual friendliness to any degree.

Bottom line: I did manage to score this slice of cheeseless, roasted veggie pizza.  It was good, but not great.  It was barely lukewarm and the crust was, curiously, phyllo dough- which would have been a fine idea if it had been executed in such a way that it was actually crisp and not soggy.  The prepared food is all takeaway and, as there is no seating in or outside the shop, we ate our snacks standing on the sidewalk as the wind blew sesame seeds off my pizza and into my Third Estate bag. 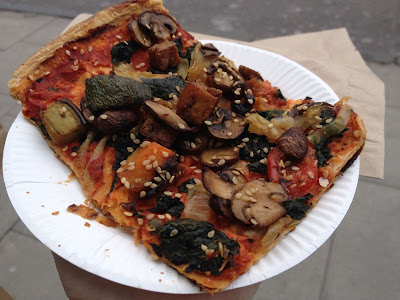 Lest you think I bypassed the vegan chocolate section: dark chocolate covered marzipan came home with us.  The ratio of chocolate to marzipan was much too low for my taste, but it was better than the pizza. 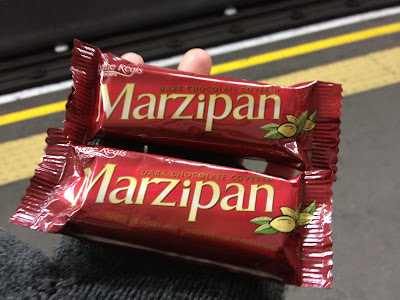 Bumblebee obviously fills a niche in the area- otherwise they wouldn't have any justification for their continuous expansion.  Based on our experience, that niche isn't necessarily vegan and definitely isn't friendly.
Posted by Abby Bean at 8:09 AM