In the time since my last visit to Sacred Chow I've heard mention of them having reverted back to much of what made them so popular (and one of my favorites) in the past.  So, I was finally ready to  give them another try.  Not one to dip a toe in the pool, I planned to cannonball in and made Chow brunch and dinner plans for the same day. 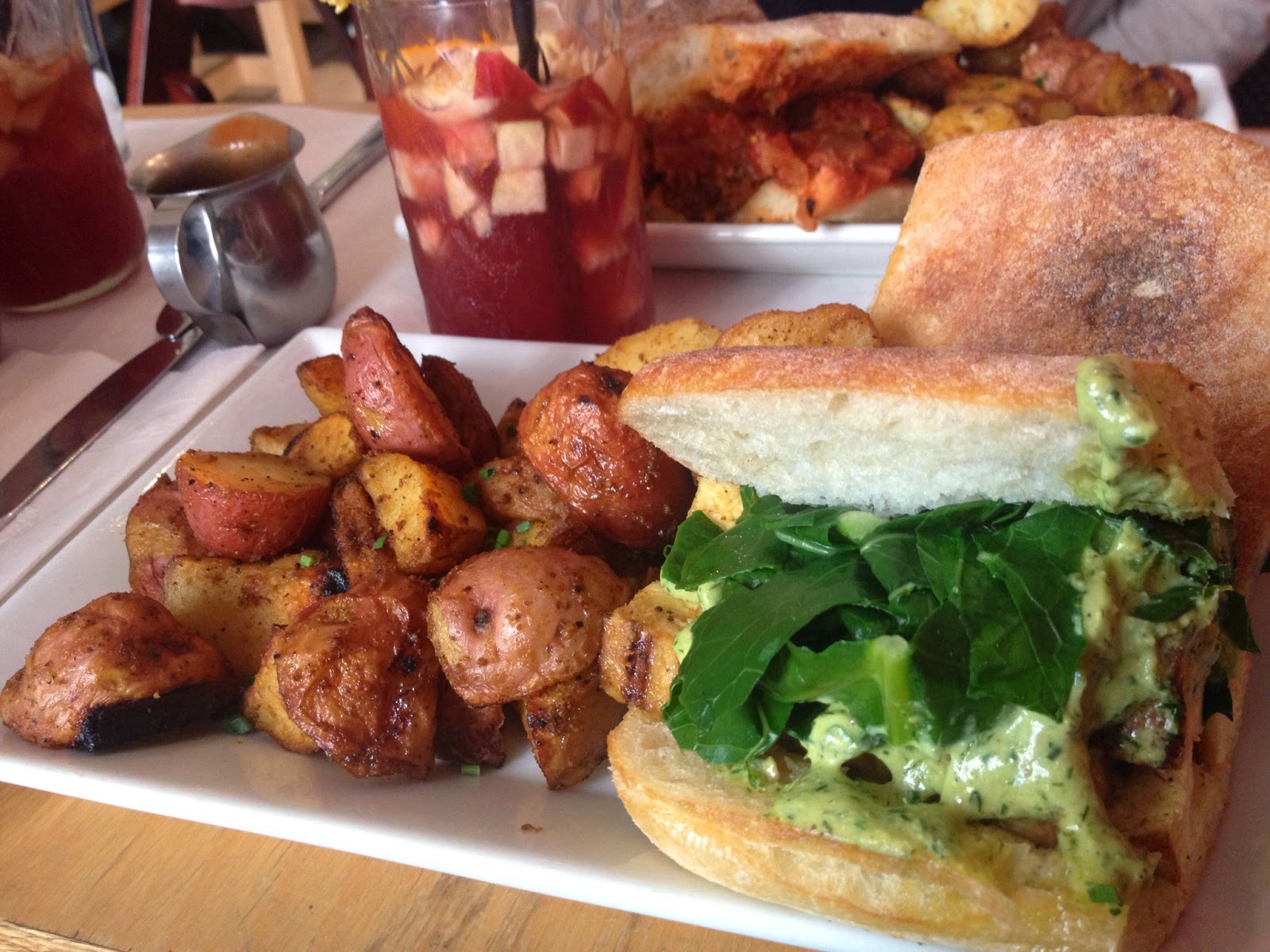 I can never get the menu to work on their website (note: just updated to swanky-ville!), but luckily my friend sent me this link from which to view.  The brunch menu lists 6 items- most of which I've already established I don't like (I do want to note that we saw the Big Scramble Bowl go by and it looked excellent: head and shoulders above any scramble I've seen previously at Chow).  Hopefully, I called in advance to inquire if the entire menu is, once again, available along with the brunch menu during earlier weekend hours; it is! 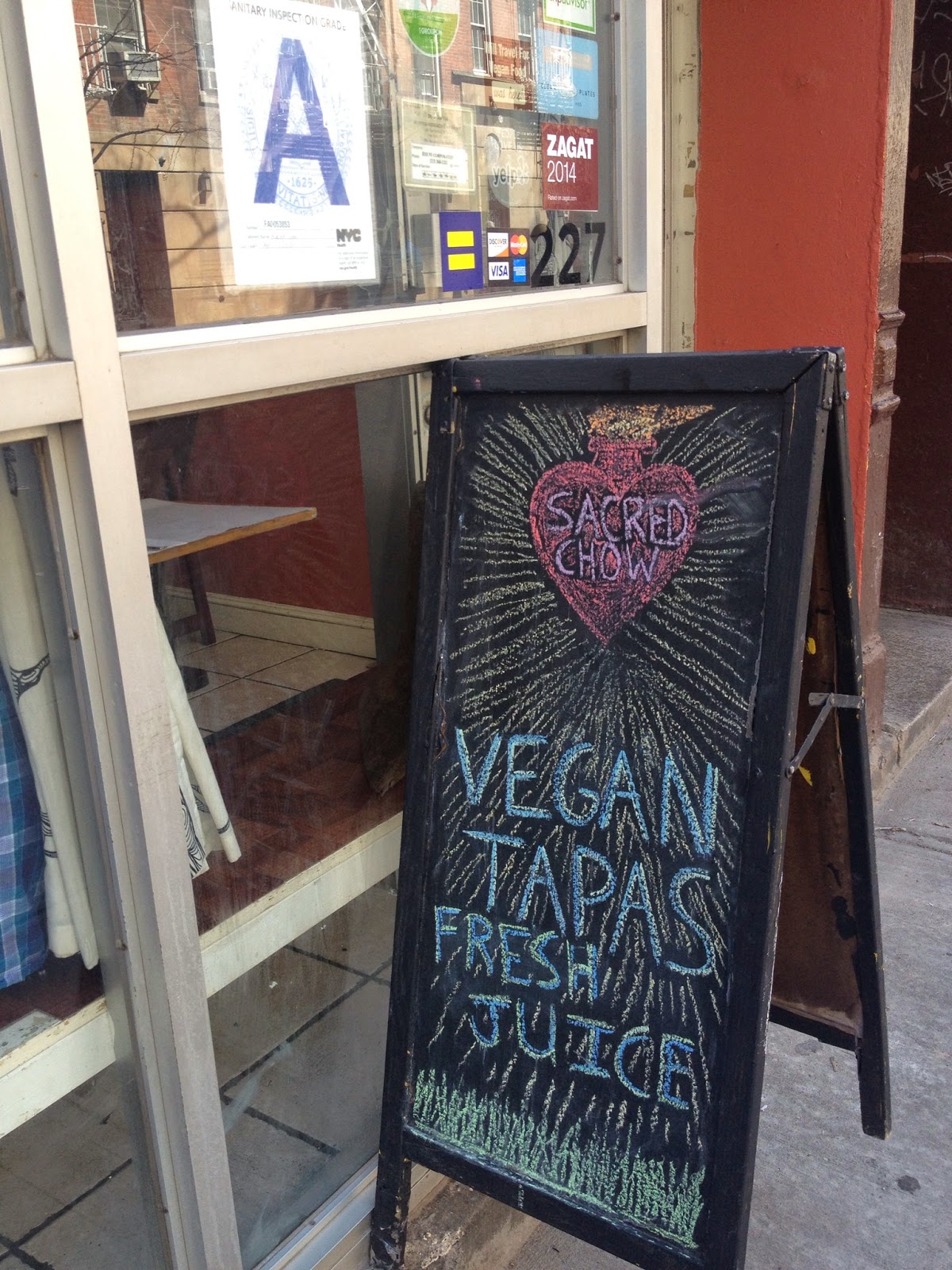 Upon arrival, I was immediately disappointed because the tables are still miniscule: even with the chairs flush against each other (which is unrealistic), you have no elbow room.  Worse: no room for extra food!  The tiny tables definitely hinder my normal over-ordering. 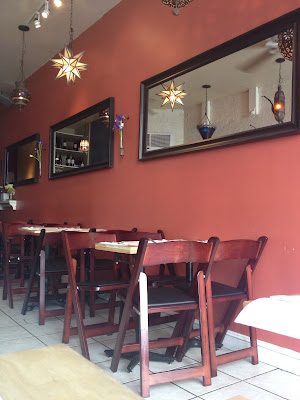 But things started looking up when I fell a little in love with our waiter, Char, from the moment he greeted us.  Then a little bit more when he wisely recommended that a friend and I share a half pitcher of sangria instead of each having one glass.  Our tee-totaling friend went with the apple-beet lemonade. 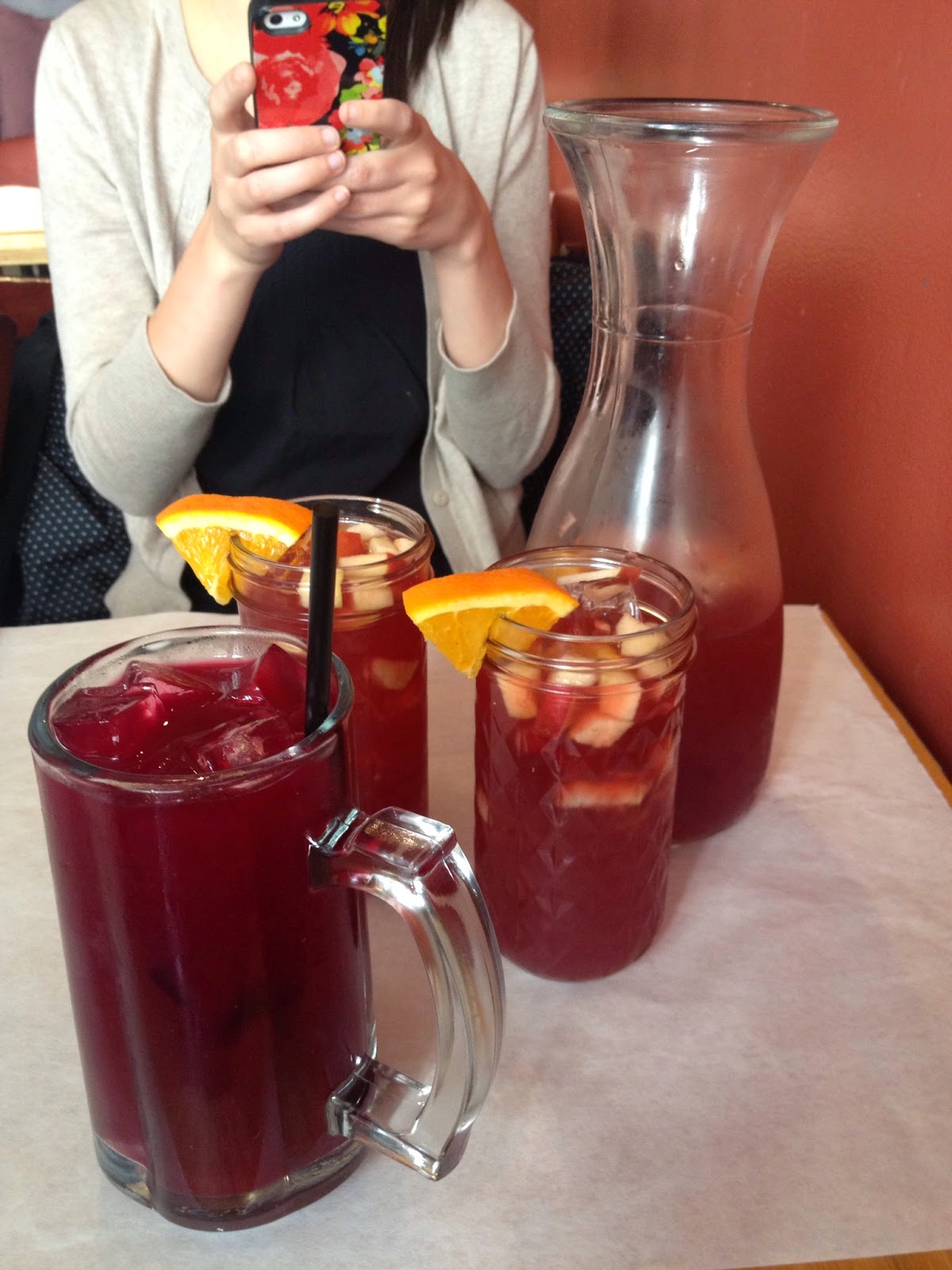 I've had the sangria at Chow before, but I don't remember it being so fruity and thirst-quenching: definitely a must-order. 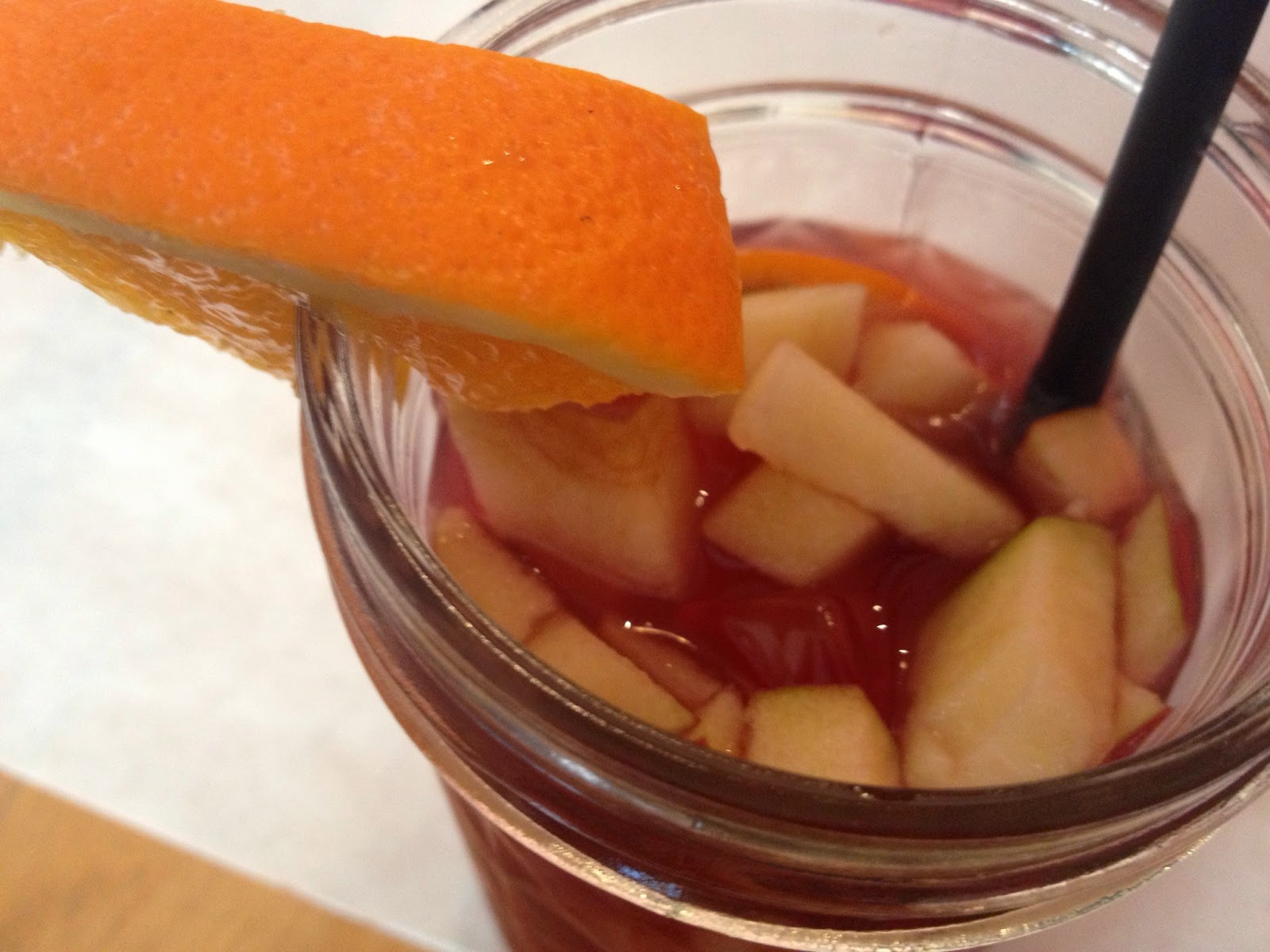 As for the food, the tee-totaler also went healthy (show-off) with the power bowl: any tapa Thai ginger BBQ'd seitan served over broccoli and/or collard greens with brown rice.  It looked, smelled, and- from what he reported, tasted fantastic.  More later...literally. 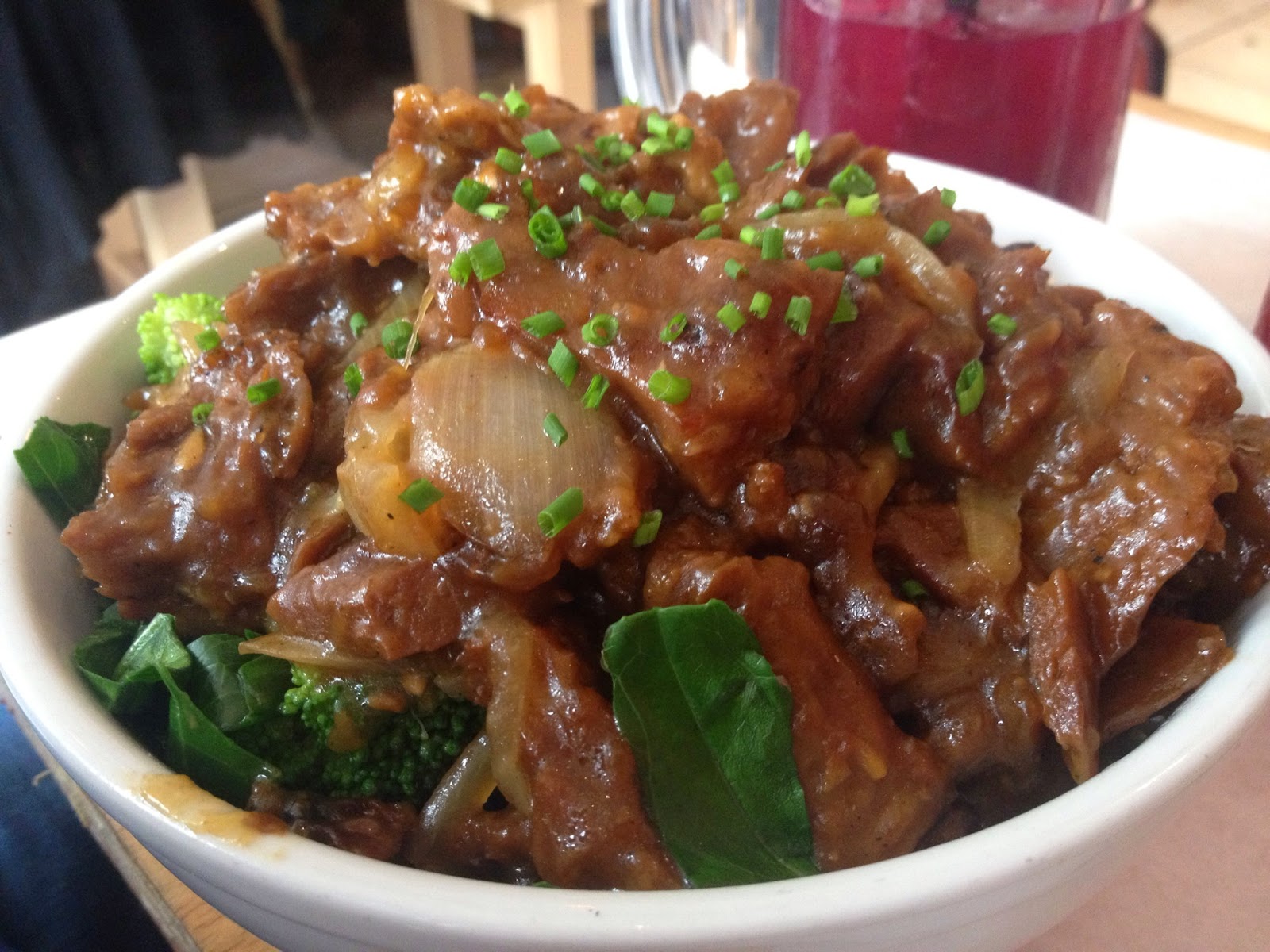 My sangria friend chose her old favorite: mama's soy meatball panini: pan-seared meatballs with a spicy Sicilian sauce, till it's piping hot.  It looked a little smaller than I remembered, but that could just be the change in bread.  In place of the old hero bread, they now use ciabatta for the gluten option (corn tortillas for gluten-free); I had no problem with the hero bread of days gone by, but the ciabatta is so much better! 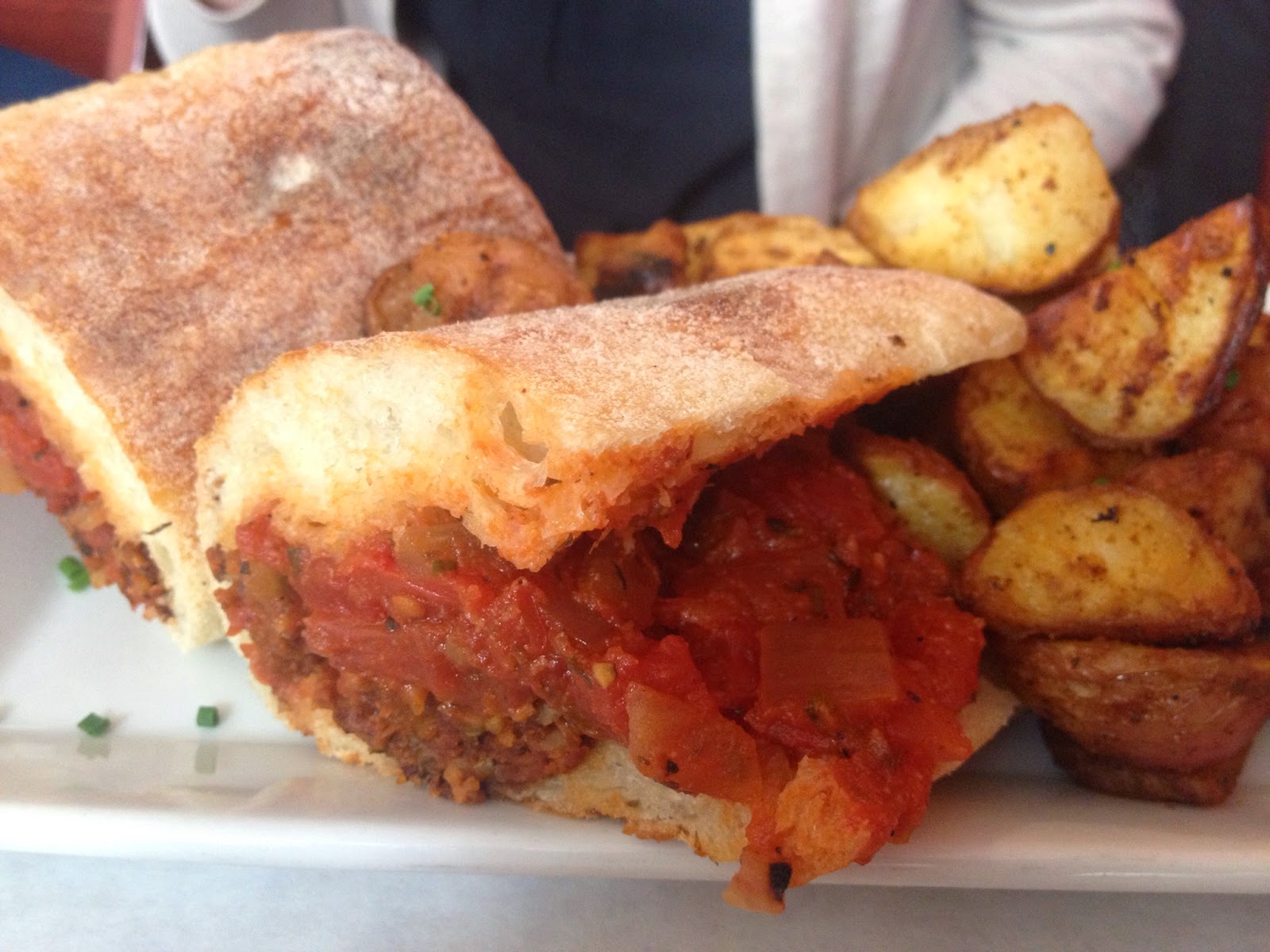 I chose the shredded nama gori spa salad panini: thin shreds of nama gori tofu tossed with house-dill mayo and diced celery; stuffed with baby greens.  This is a cool, old favorite of mine- particularly satiating on hot days.  When it arrived, it didn't look at all like I'd remembered it: the tofu was in strips that reminded me of those in the kale Caesar and they were warm; instead of baby greens there were steamed collards; and the dressing seemed a little more oily than I remembered. 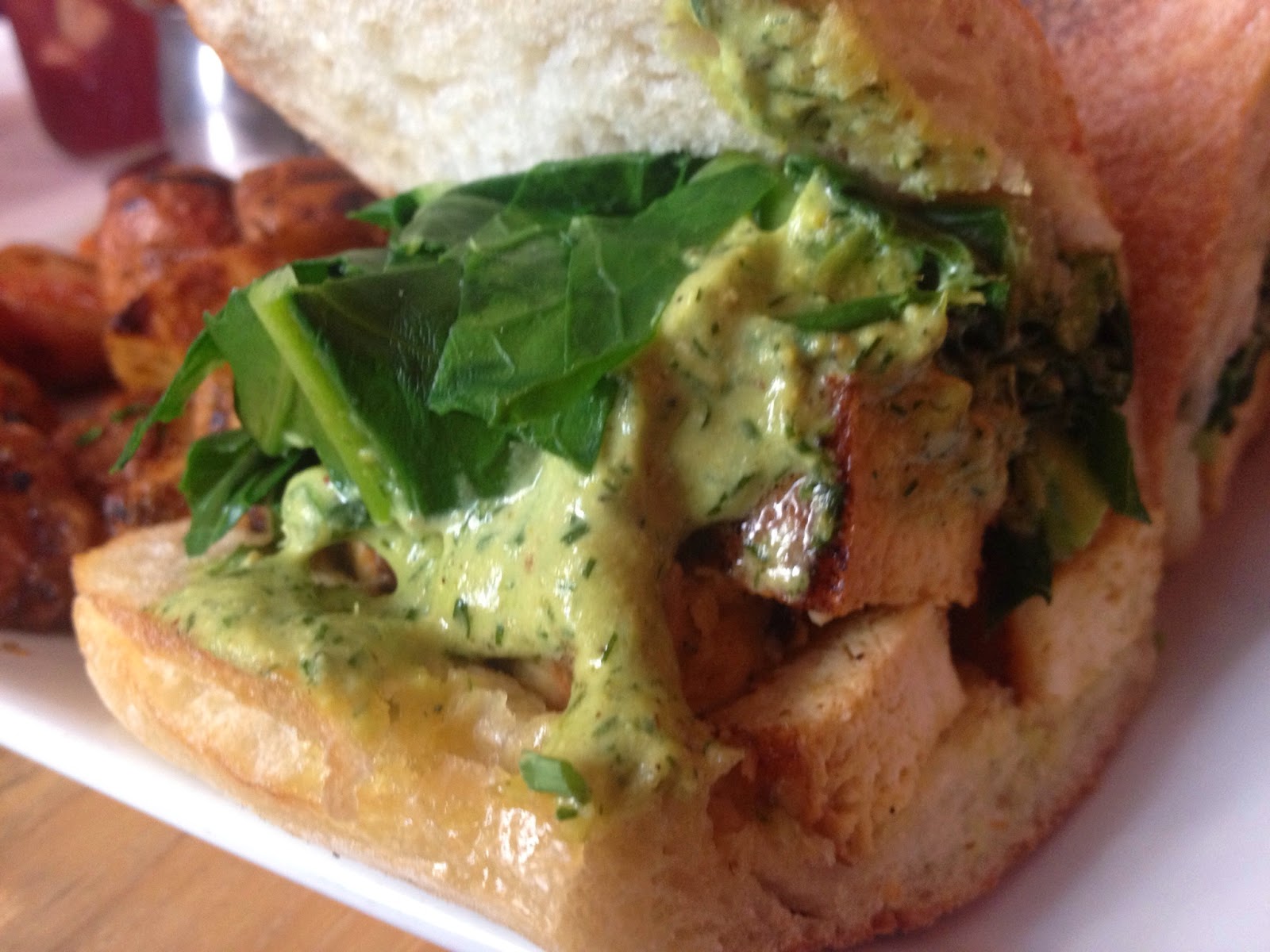 However, despite not being what I expected it was really delicious, albeit a bit heavier meal than I'd anticipated.  I say this with irony since I had no problem eating every one of the generously portioned crispy potato home fries that accompanied the sammie. 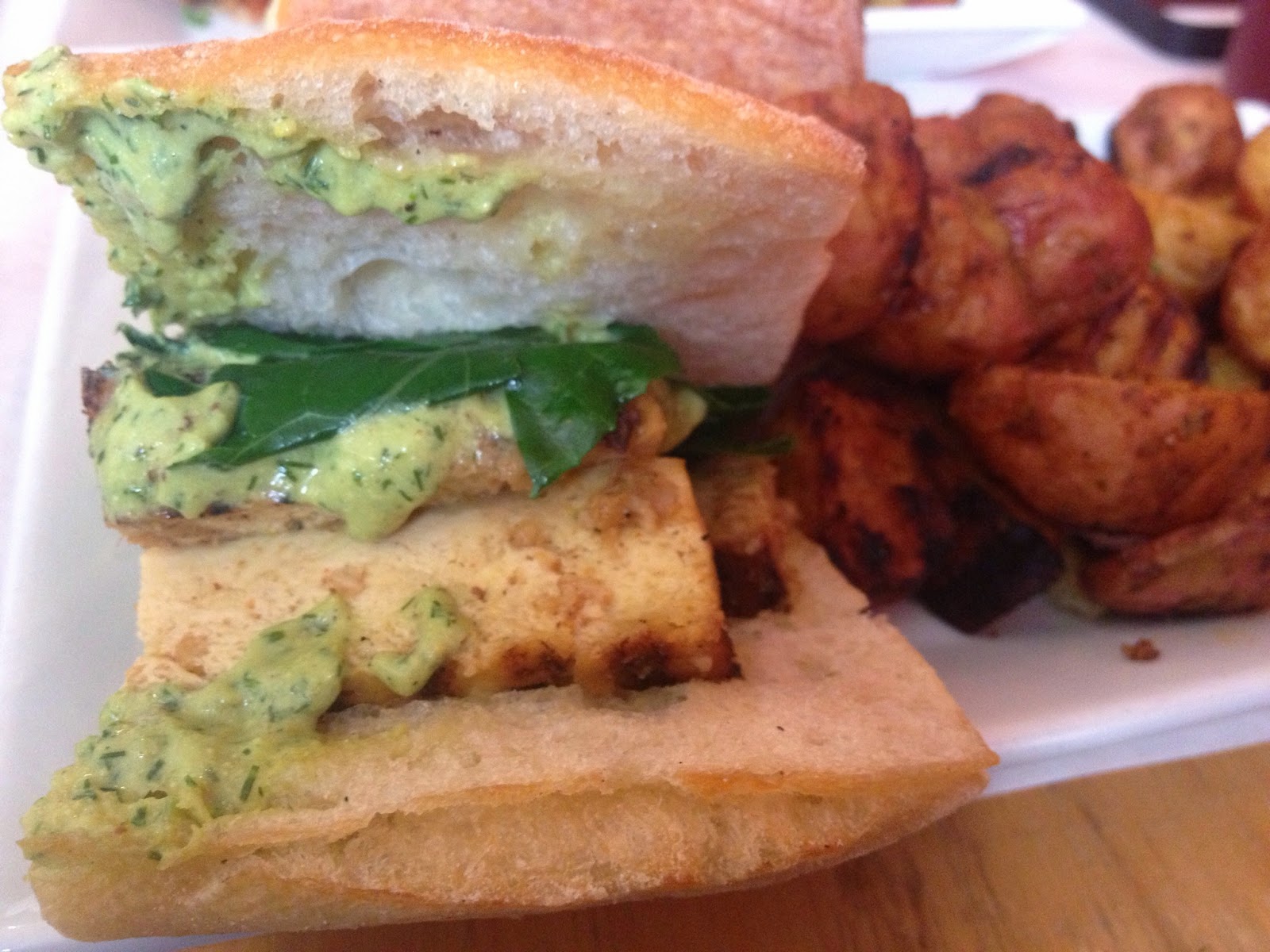 Later at dinner I realized what had happened; I'd accidentally received the grilled nama gori panini: nama gori tofu steaks are first steeped in a rich mustard-garlic sauce, then sliced, and seared till tender and succulent; served with baby greens and a drizzle of garlic aioli. Weird because the receipt did say "spa salad," but at least I'd figured it out and had the chance to try a sammie I wouldn't have otherwise ordered. 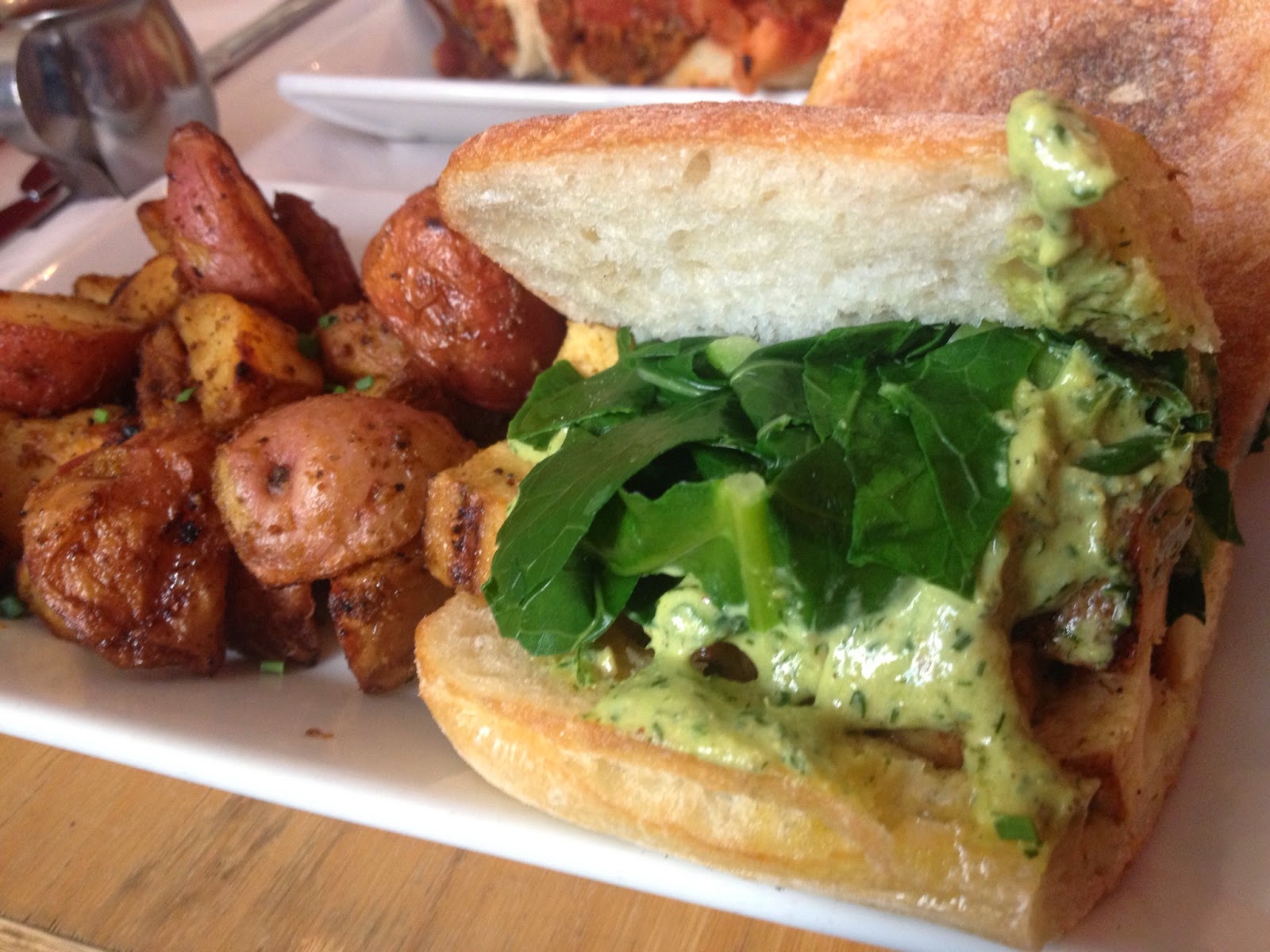 An interesting tidbit from the menu about nama gori.

For the record, this is how two plates of paninis, a half pitcher of sangria, and a pot of hot sauce fit on a single table shared by two: it's made possible solely by virtue the strategically-shaped plates.  While there are other meals that do not lend themselves to these relatively small plates, I have to admit that the paninis work perfectly; they're definitely the way to go.  But, keep those elbows tucked and do not lean in for a bite of your sammie at the same time as the person across from you, lest you bunk foreheads! 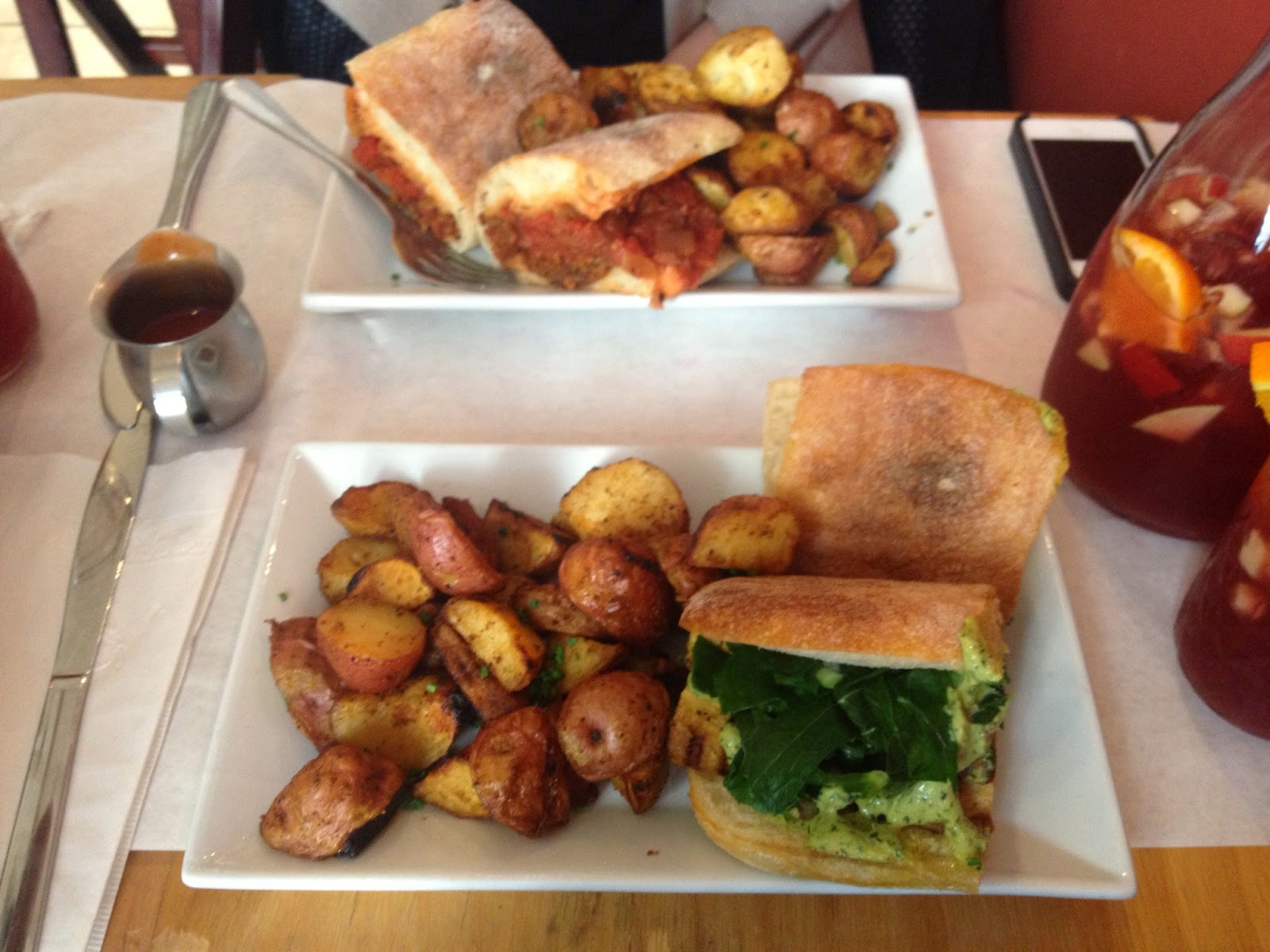 I was not at all disappointed to be returning for dinner, which we did 9+ hours later. 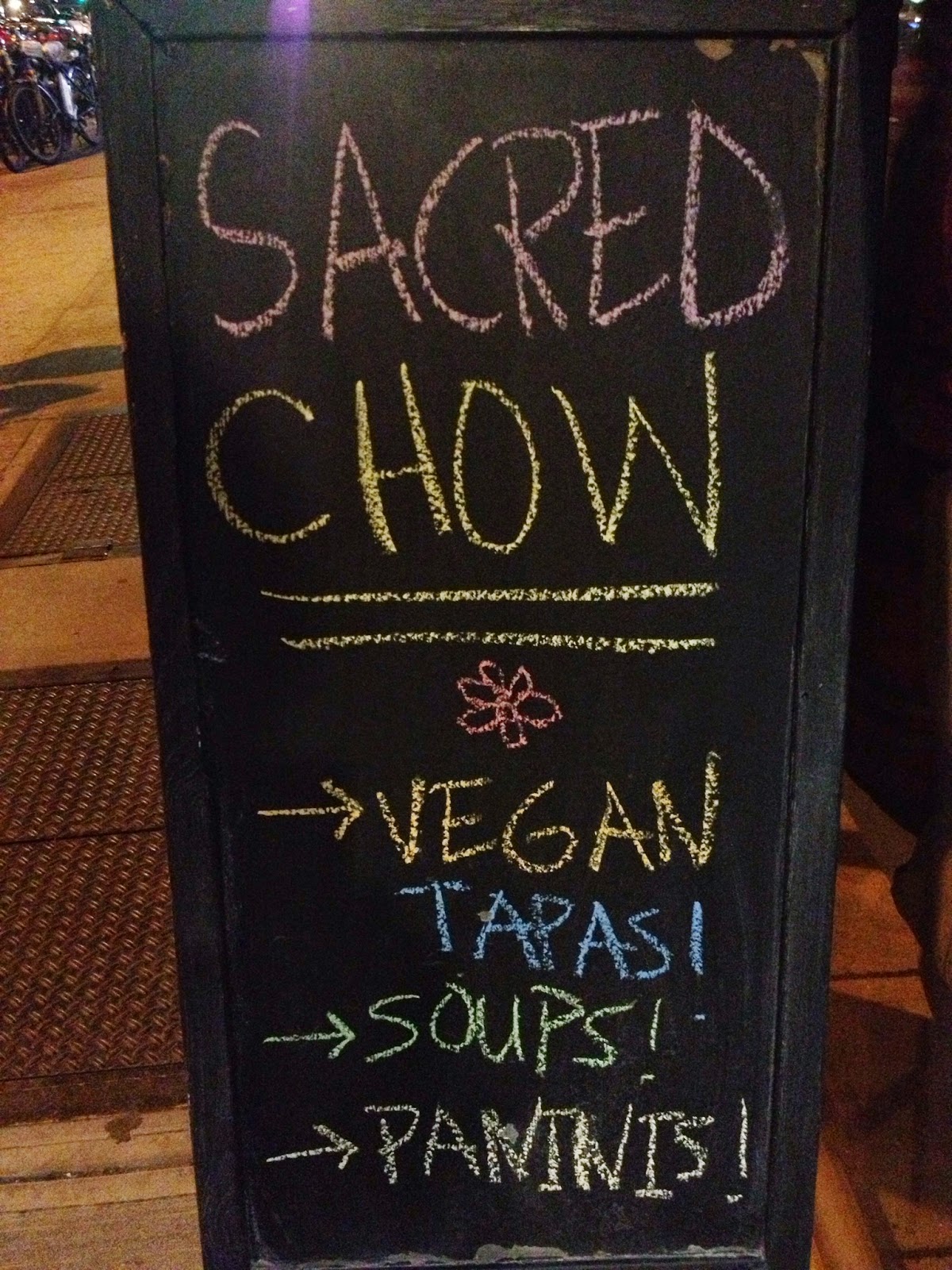 This time we were seated on the bench-seating side and it was much worse as far as squeezing in amongst fellow diners is concerned. You see, it's not only that the tables are small; the set up is also entirely too cramped: my person and my belongings span a width much wider than what is required for my actual plate of food.  And, I assure you; I am not that large of a person. 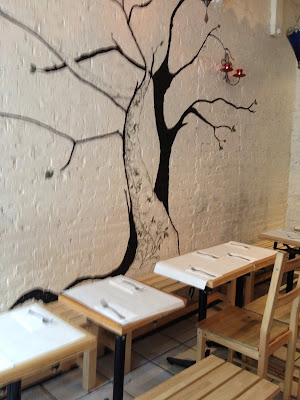 Presumably because the tables are multiple plate prohibitive, the revered tapas threesomes are now served in compact fashion on a single plate instead of the old impressive yet impractical tiers.  I ordered the root vegetable latkes: crisp waffle latkes pair perfectly with date butter or simple sour cream; dijon marinated raw kale salad; and sunflower lentil pate: a nutty dip, blended till pate perfect, smooth with caramelized onions and a touch of black pepper, served with crudites.  I'm not sure why the latkes are now shaped like waffles, but they taste the same: albeit with more outer crisp and less inner veggie. 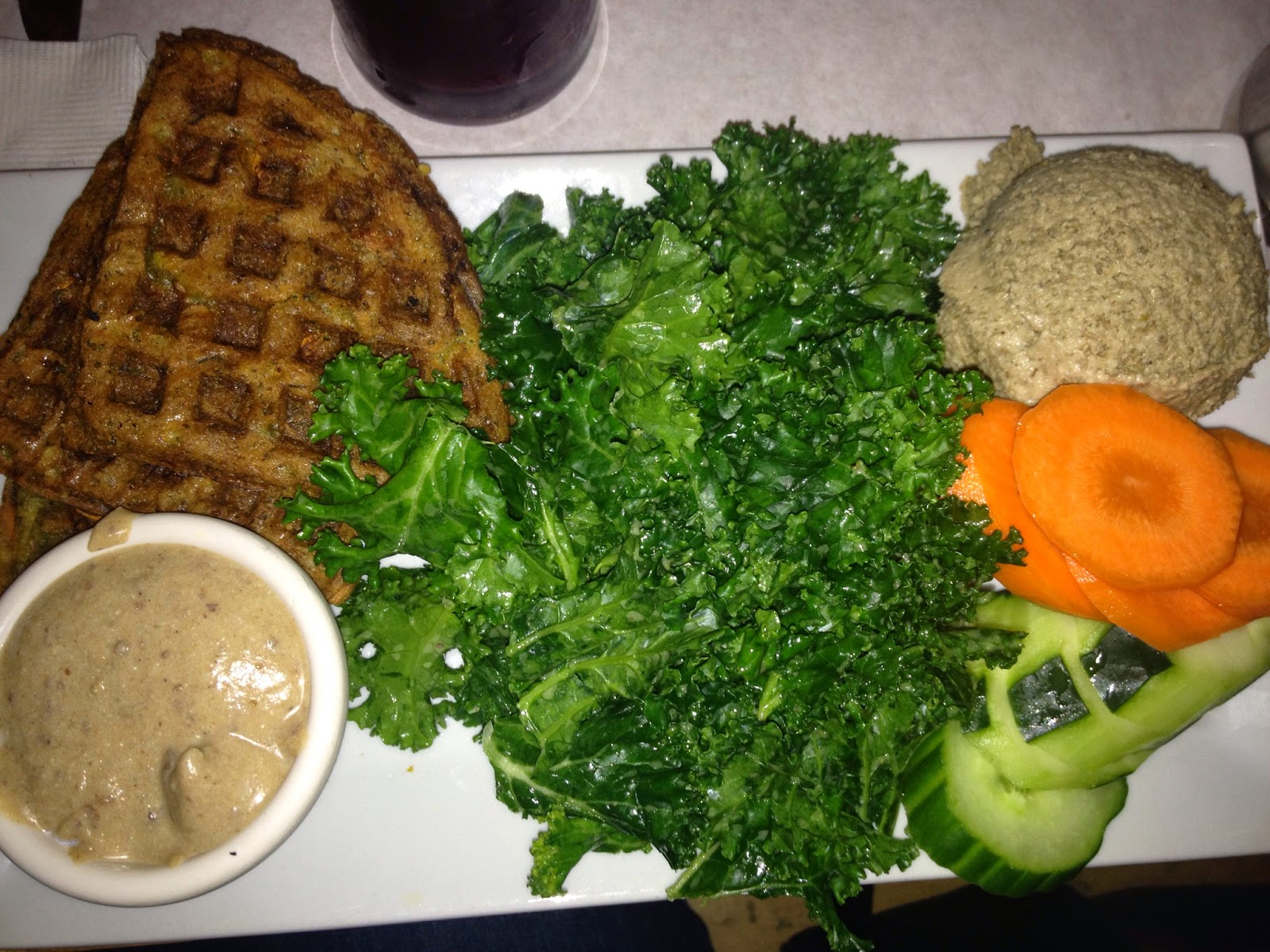 My friend ordered the Thai ginger BBQ'd seitan again, along with Caesar-dressed raw kale salad and the sunflower pate.  We both agreed that the sunflower lentil pate tasted a little different; I'm willing to admit that it could be because it was missing the sunflower seed garnish- which is negligible, and the glorious crostini, which is not.  Please bring back the crostini option! 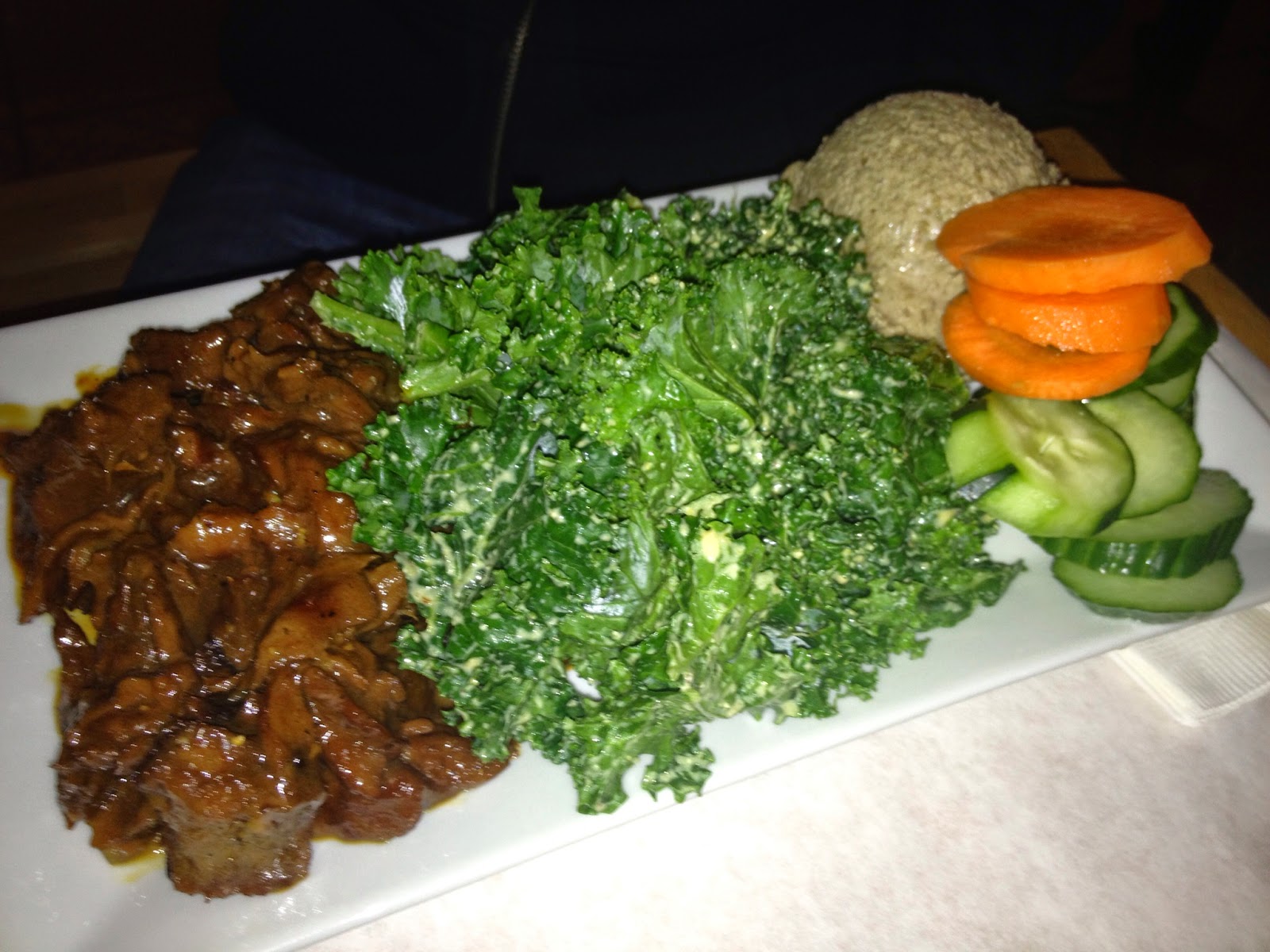 My other friend ordered a special wrap, which she loved.  Unfortunately, I can't remember the details. 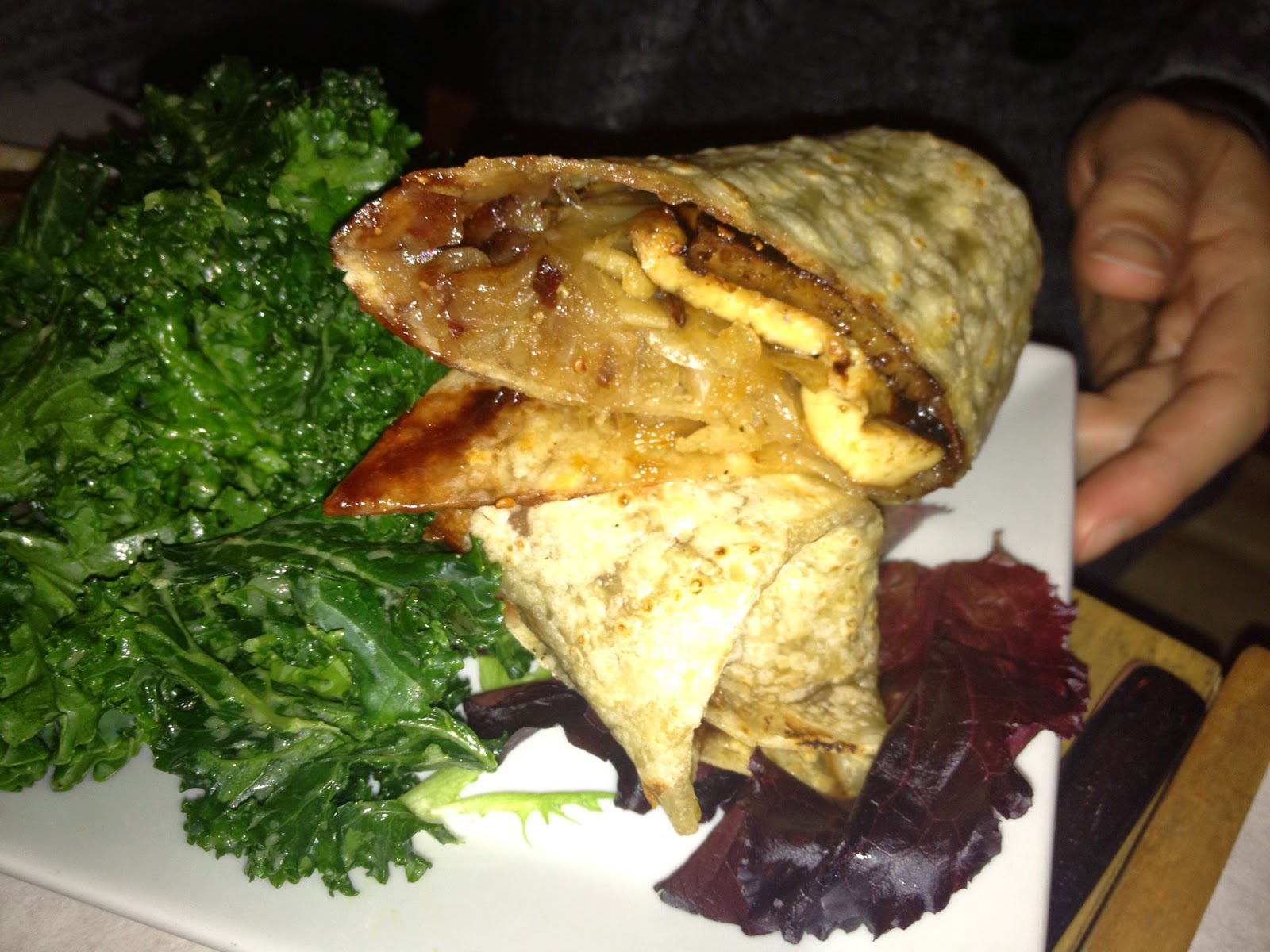 Also, the dijon kale and the kebab vegetables: red peppers, onions, mushrooms, and zucchini perfectly grilled and served with a side of French vinaigrette, which she enjoyed but felt were unnecessarily oily.  We are all huge fans of Chow's kale salad regardless of dressing choice, but found the dijon and Caesar kale salads unfortunately under-dressed. I suppose we could have requested extra dressing, but my one friend was already being inadvertently pummeled by the sweet staff trying to efficiently navigate the cramped and full space; they had enough to contend with. 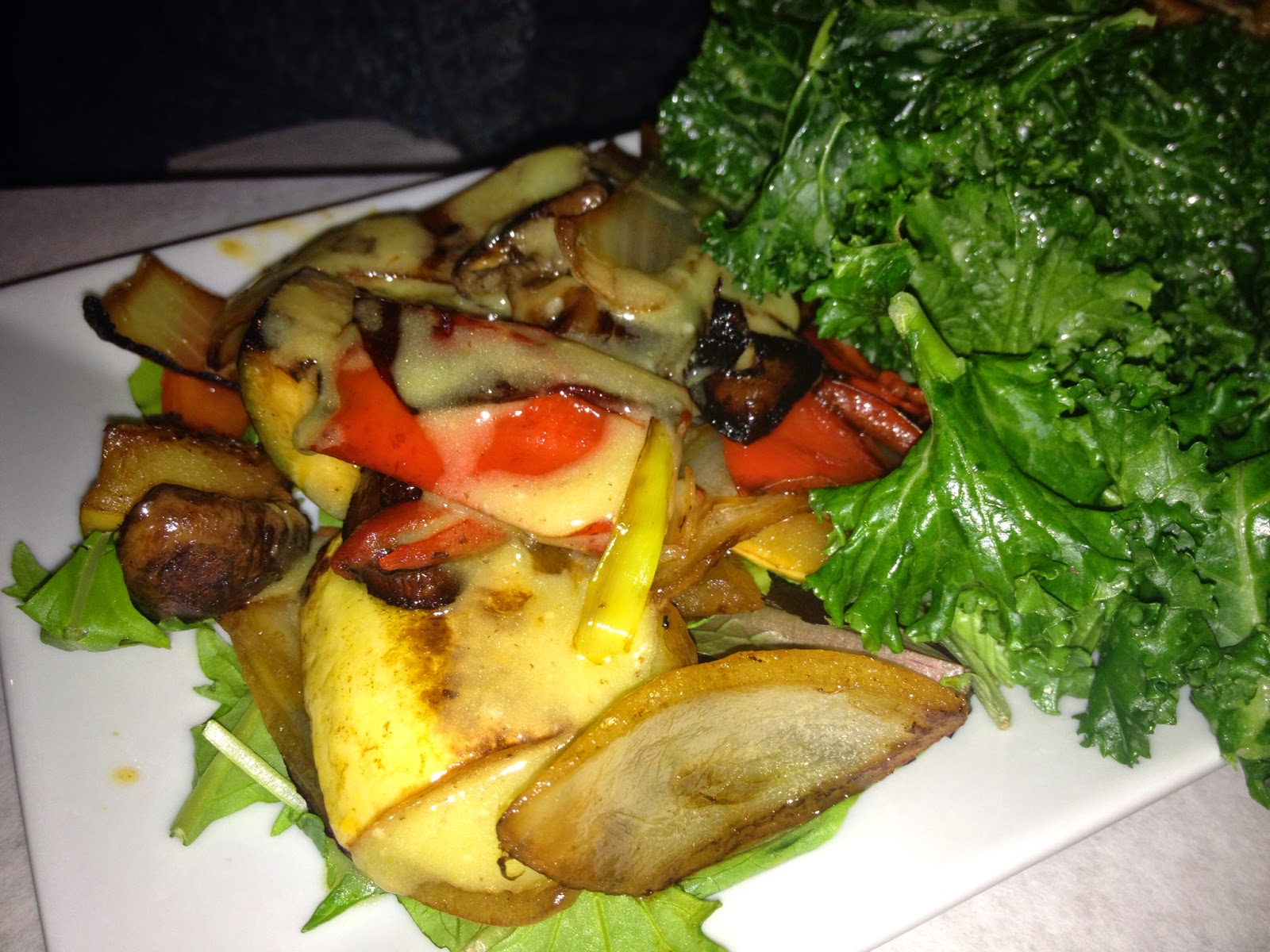 Having consumed enough sangria for one day, I ordered the apple beet lemonade to accompany my dinner.  It was a little beet-ier than I expected (this one is significantly less so), but thankfully did not taste apple-y; it was nice to see more non-alcoholic beverages added to the menu. 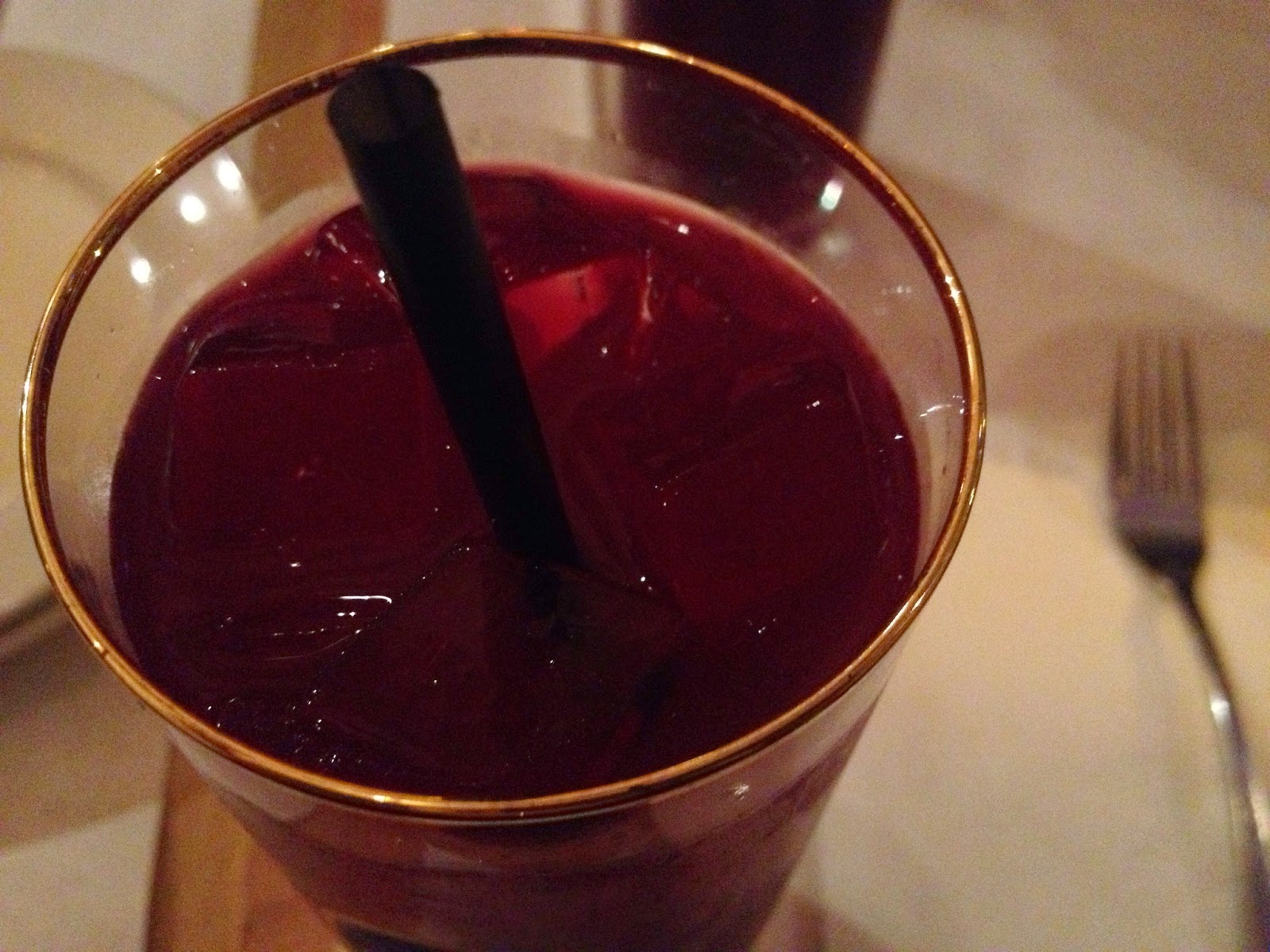 Ultimately, I'd say the vibe that once made Sacred Chow a favorite is creeping back: the atmosphere remains chill, the waitstaff is an asset, and the food choices and prices have returned to normalcy. 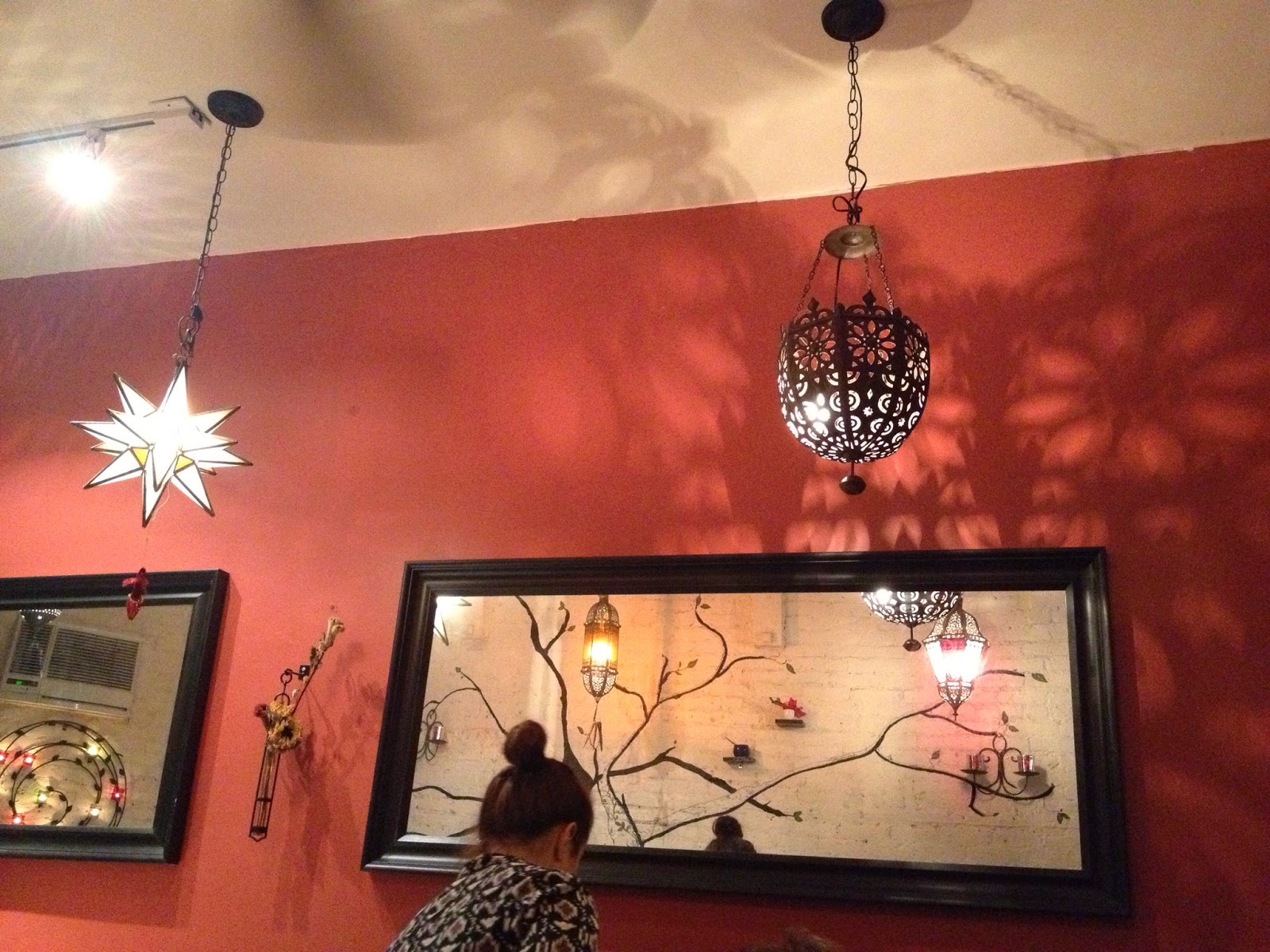 But, the ease of enjoying your meal comfortably with the current set-up remains an issue to be taken into account when planning a visit on a day you might be carrying more than your cell phone, want to order multiple plates-full of food, or are just- perhaps, feeling a bit bloated. At dinner, I was snugly nestled between mine and my two friends' bags on the bench in a space meant for two and it was still unavoidable not to become acquainted with the diner next to me- which isn't necessarily a bad thing.  However, M.O.B. has fab communal seating, albeit considerably roomier.  And don't start the Brooklyn vs. Manhattan real estate debate!  I get it, but I maintain that there's a happy medium.  And, for the record, Adam- the man seated next to me, is a relatively new vegan (6 months) who is in training to finish an entire brownie sundae in one sitting at TBICSITU (amateur).

I'm happy to report that not only would I not hesitate to return to Sacred Chow, but I'm looking forward to it (I'm practicing traveling light and sucking it in).  It's nice to see such an improvement and I hope for even more in the future.
Posted by Abby Bean at 8:37 AM