We recently had a particularly outstanding experience at Sprig & Vine.  As you know, the food is consistently delicious; but, as I've mentioned, the service can vary drastically.  Here are two contrasting examples and my plea for Sprig & Vine to offer consistent service that matches their terrific food. 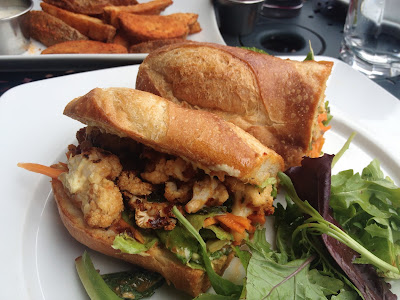 Visit wonderful:
On this day we were served by a new (new-to-us?) waiter, Jason.  He was friendly, efficient, and enthusiastic about the menu; we knew from the start it was going to be a great visit.

For an appetizer, we tried another iteration of the S&V pea cakes; this time: zucchini & black eyed pea griddle cakes: with smoked chili-kohlrabi slaw.  You just can't go wrong with pea cakes, but the original version with the spicy corn remoulade is still our favorite. 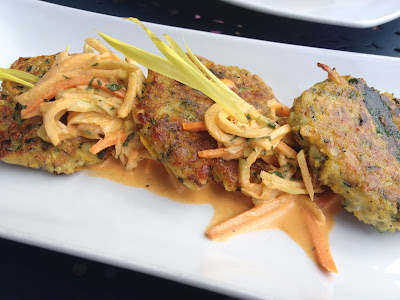 The waiter explained that there was a zucchini-based tasting menu and, although we were tempted, decided to just choose one item.  So, a new special appetizer: stuffed zucchini blossom tempura: scarlet runner bean filling and chilled cold zucchini soup.  Look at that presentation!  However, I think I liked the idea of this better than the reality.  The delicate zucchini blossoms were overwhelmed by the generous bean filling.  Otherwise, I loved the light and authentic tempura coating and, surprisingly, the soup. 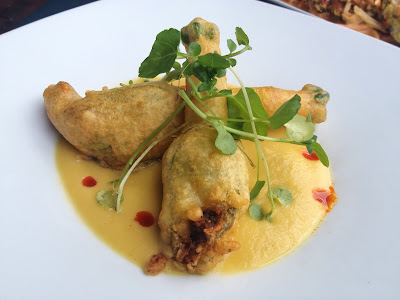 We both enjoyed a seasonal beet lemonade; there was only a faint earthy taste and it was worth enduring for the color nutritious impact.  Actually, VM started with coffee but then I made her taste my lemonade and she couldn't help but to switch beverages mid-meal. 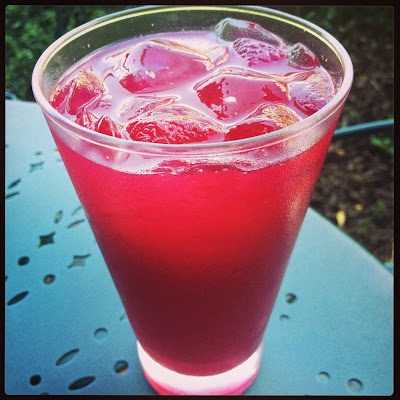 For lunch, we both went with...the Vietnamese cauliflower banh mi: pickled carrot and jalapeno, shredded lettuce, cilantro and mint, lemongrass aioli.  What can I say that I haven't already said?  It's remarkable.  It's outstanding.  It's easily the best sandwich in Pennsylvania.  I urge you to embark upon a road trip with this sammie as your destination. 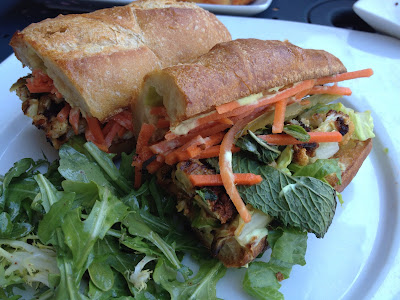 Just keep in mind that there's a 50/50 chance that the experience will leave you annoyed.


Visit-not-so-good:
The experience began when we chose an outside table and noticed that it was coated in pollen and speckled with bird terd; it hadn't been cleaned since the previous day.  The people dining next to us asked the server to wipe their table, but when she proceeded to spray cleanser too close to their water glasses for my comfort, I decided to just clean ours myself. 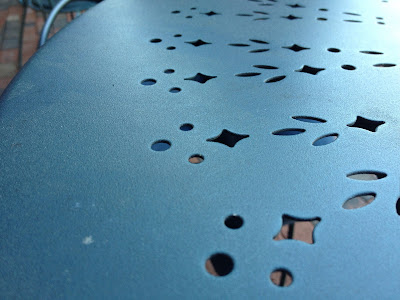 Even after I did so, the waitress walked by us twice without so much as looking in our direction.  When I asked her if we could see menus, she said, "Oh; I had no idea you were eating here.  Sometimes people just sit."  I suppose it would be crazy to ask?  Such a better idea to ignore potential customers. 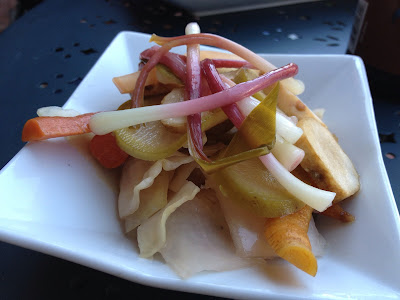 They had yet another variation on their black-eyed pea cake.  Instead of the corn remoulade version that I loved (hint, hint), it was now served with apples (gross) and cilantro (gag) as black eyed pea and sweet potato cakes: cilantro-apple salsa, smoked chili aioli.  Of course we still ordered it.  I bypassed the salsa, but found the pea cake as good as ever (thank goodness for smoked chili aioli). 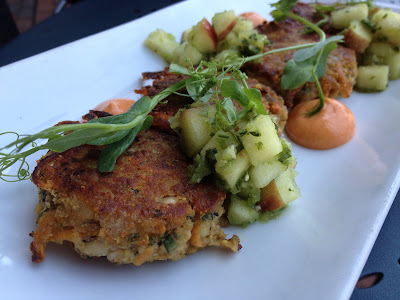 Not halfway done with our appetizers, our lunch arrived: the server- with her hands full of our sandwiches, stood staring at our table of partially-eaten  appetizers as though someone else was going to figure out what to do.  Here's a hint: keep track of the pace of the meal and, at very least, clear one course's plates before presenting another; Sprig & Vine's food was not meant to be scarfed down and no one was waiting for our table. 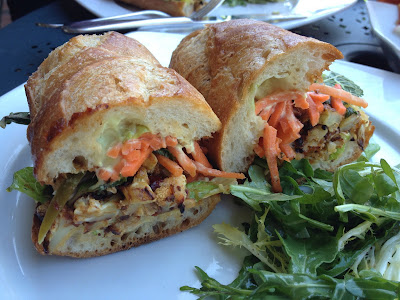 At the last minute she remembered our fry order had been forgotten (blasphemy!).  Kennebec potato wedges: grain mustard aioli (I shall never attempt to make fries again): 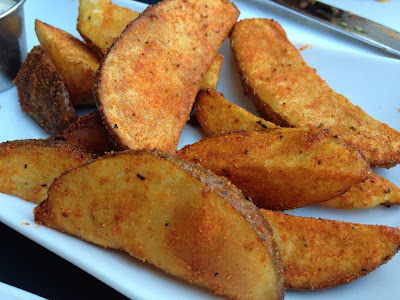 Of course I had to stare at my dirty appetizer plate for the rest of the meal; I presume because the server was annoyed that I had requested it to begin with? 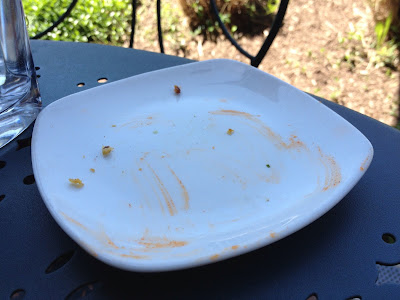 Everything was washed down with a housemade lemonade and natural root beer, but I still left with a bad taste in my mouth. 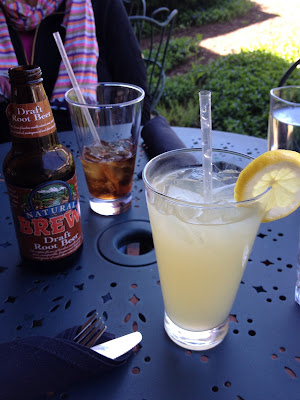 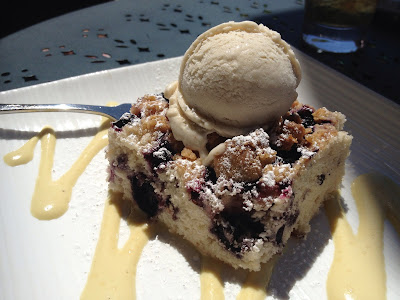 I really enjoyed my cake, and the cream was unexpectedly delicious.  I still don't love their ice cream (not sure if it's house made?), but overall this was a very nice choice.  The only thing wrong with dessert was that, for some reason, the server felt it necessary to deliver the dessert to the table at the same time as the bill, which she inexplicably propped up around my cake. Nevermind that the bill-holder is full of germs I don't want hovering around my dessert, it was just plain rude and unnecessary.  Why, Sprig & Vine, why? 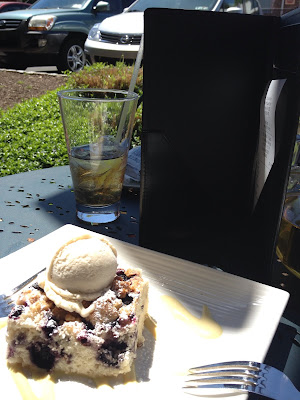 I've no idea why, but service just doesn't seem a priority for Sprig & Vine even though they are an upscale establishment.  A great start would be for all members of the waitstaff to consistently start with hello, rather than, "Do you want anything to drink?"; to take our order by saying, "What have you decided?" rather than with an expectant, "Okay?"; to have my meal come out when I've finished my appetizer; to be given plates and have them cleared as appropriate; and not to given the bill while I'm nowhere near through.  Maybe I want a second dessert.  It's been known to happen. 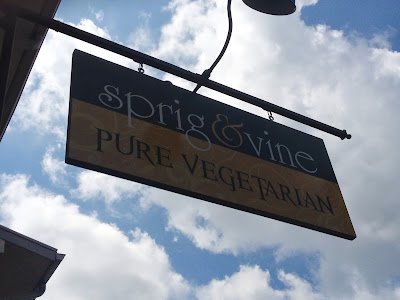 Sprig & Vine has some of the best food in the NJ/PA area (it's right over the bridge): that's why it's so frustrating that they often exhibit service not befitting their impeccable food and beautiful restaurant.  I know they can do better!
Posted by Abby Bean at 7:53 AM