When a friend suggested we try the newish Ellary's Greens for dinner, I happily obliged.  I was both surprised and disappointed, however, when she told me on the way that it was neither a vegan or vegetarian restaurant, as I'd assumed otherwise. 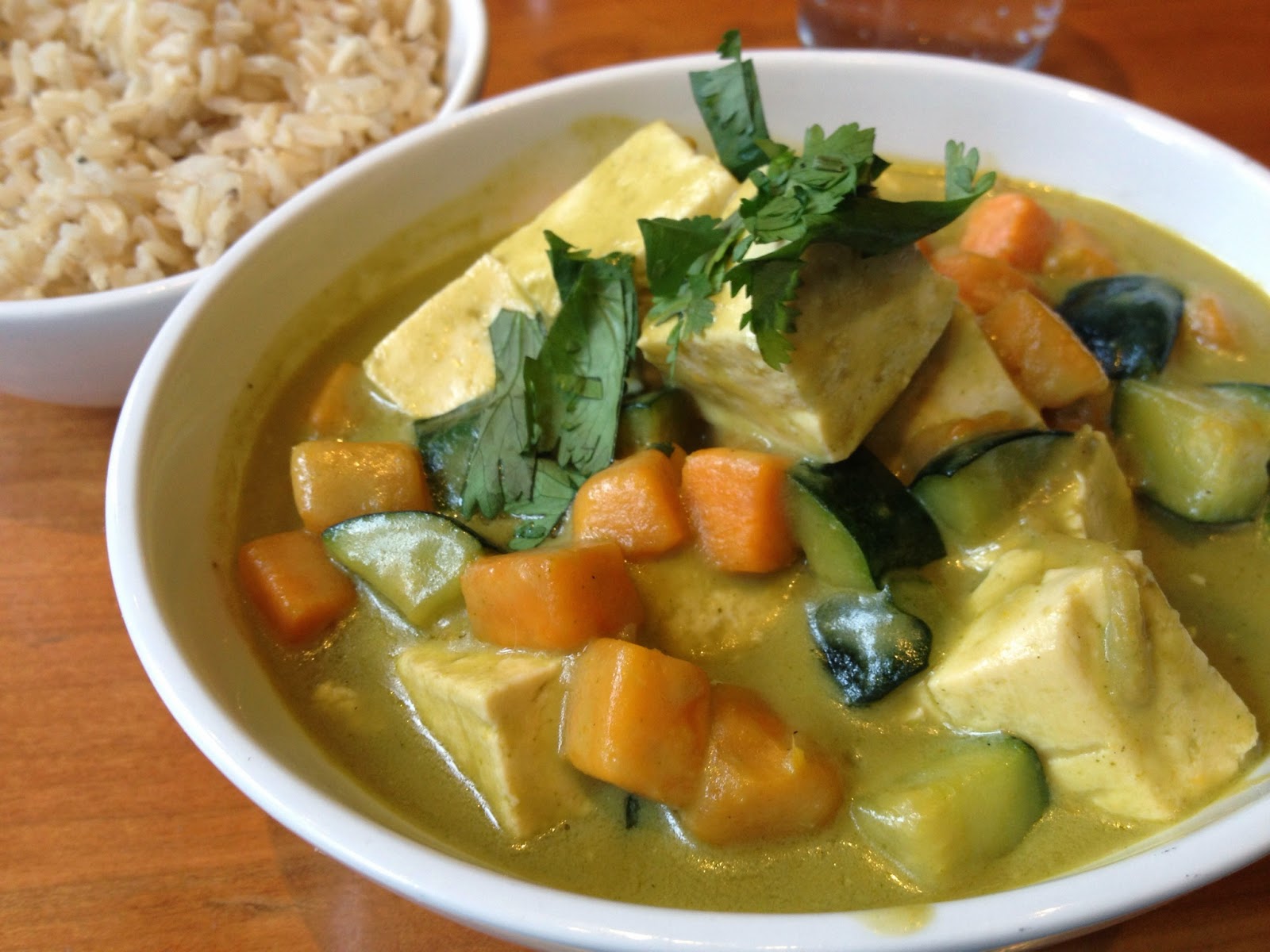 The restaurant is literally green, but otherwise unassuming from the street. 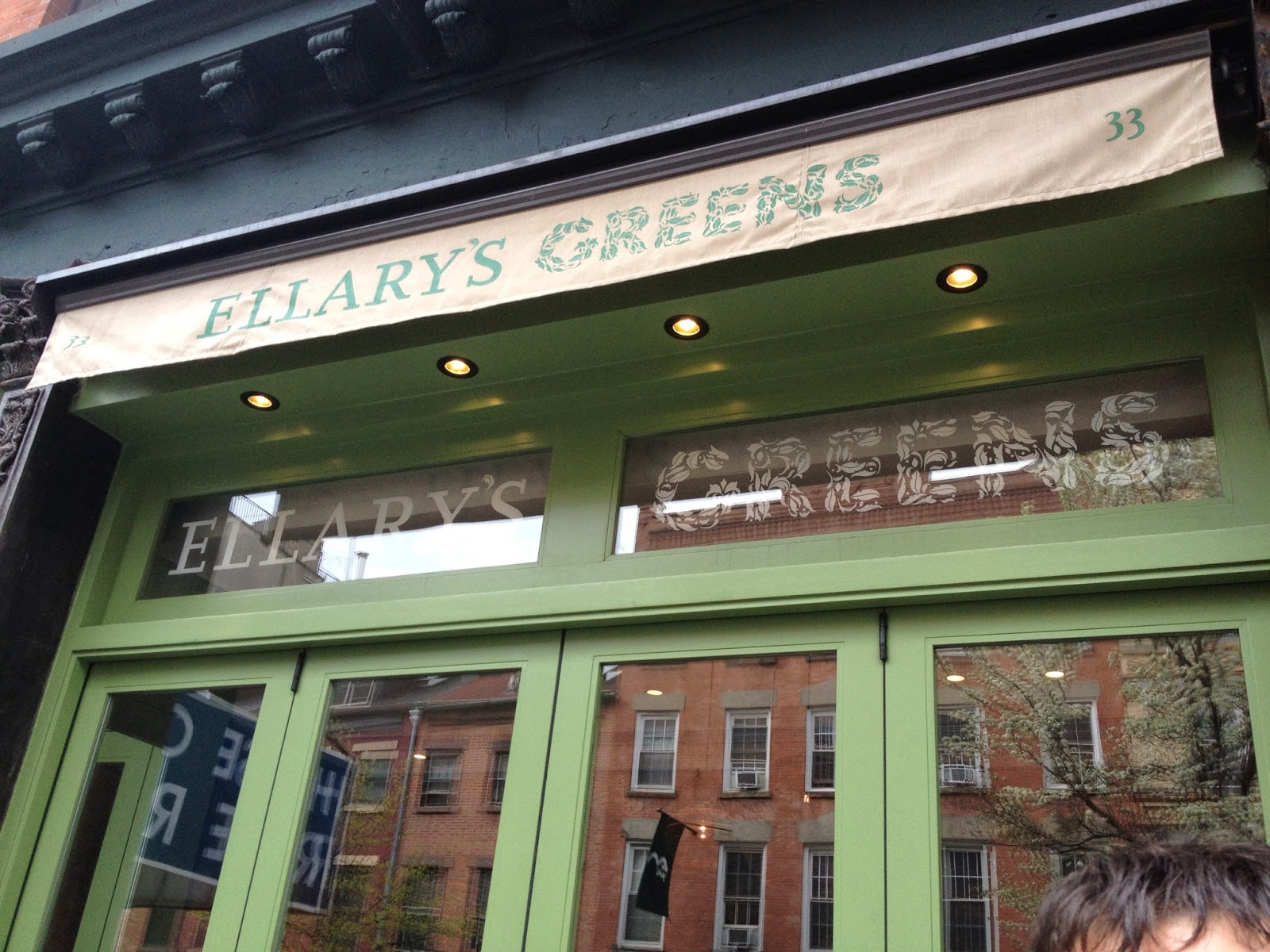 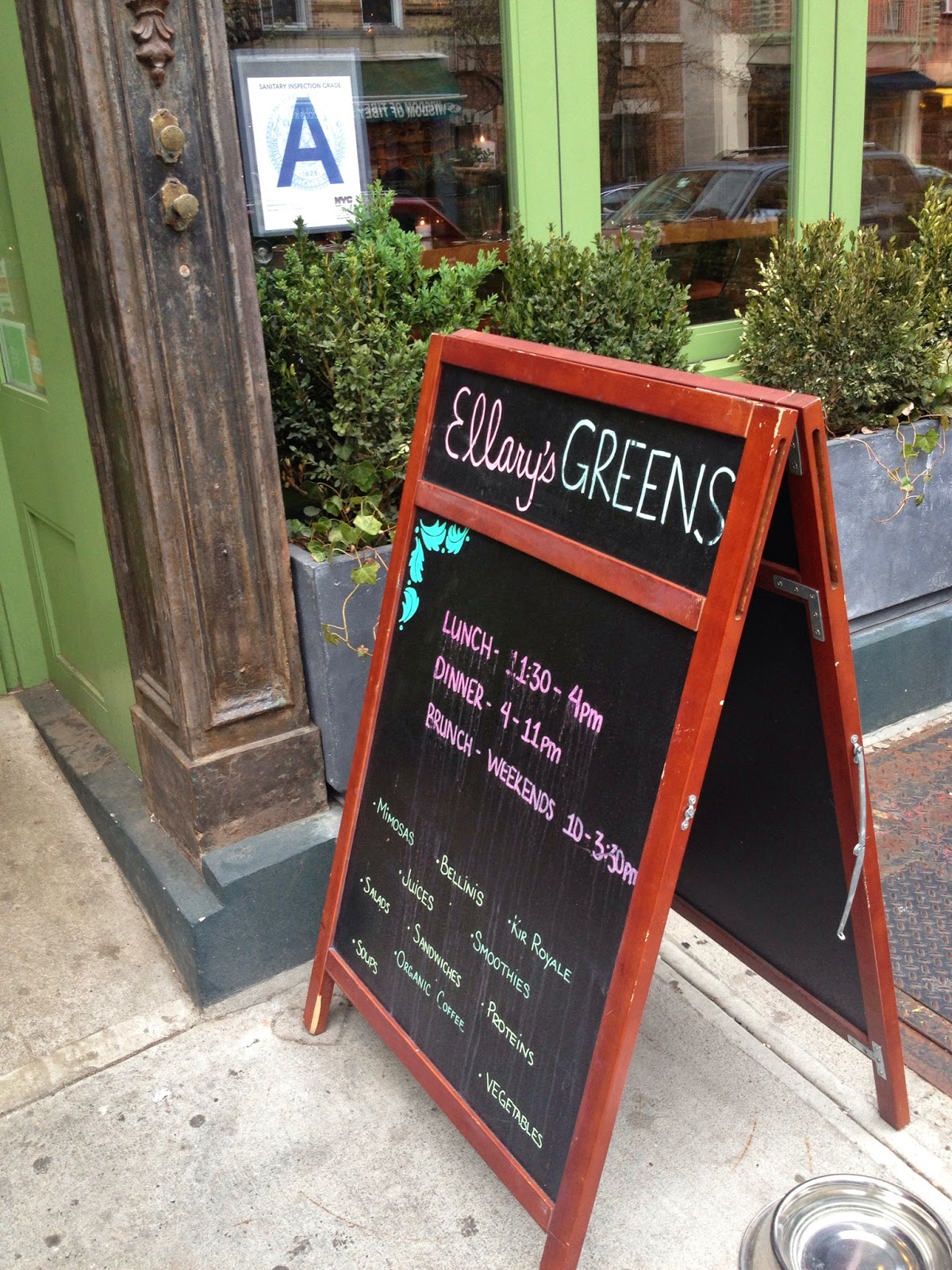 However, the dining room is quite stunning. 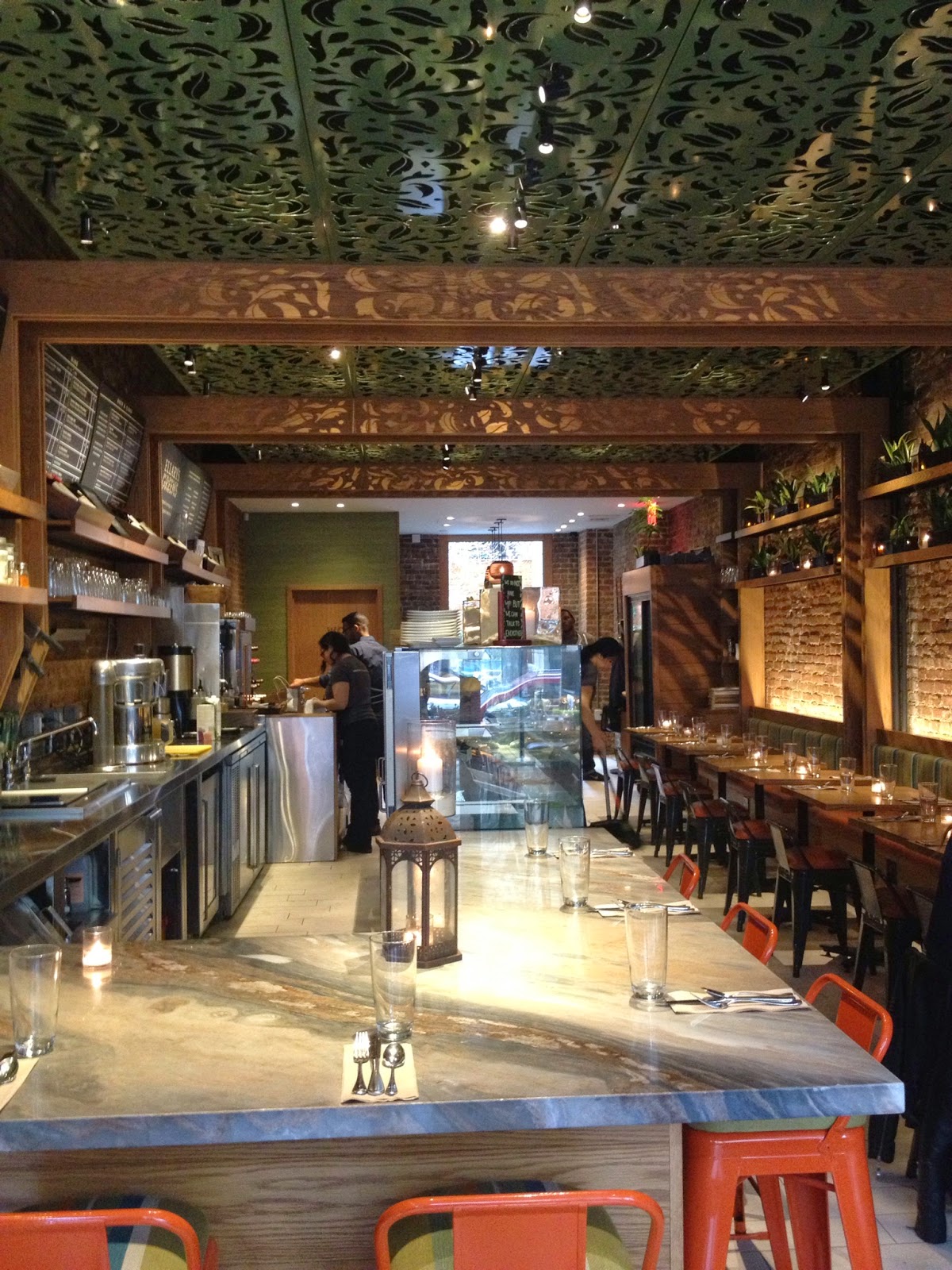 We were having an early dinner on a Saturday, so only one other table was occupied.  Since we had our choice, I strong-armed the group into sitting at the beautiful communal table in the window.  I should note that the chairs are a little strange, but they could be worse. Thankfully, the menu items are clearly marked as being vegan, vegetarian, gluten-free, and/or dairy-free; you definitely get the sense they are well aware of the distinctions.  The dinner menu is relatively vast, so it was nice of the waiter to explain that they recommend ordering multiple plates in order to create a personalized a la carte meal; however, the prices are a little high to go too crazy.

Two friends chose the chickpea burger: with escarole and house-made tomato jam.  One had it on a gluten free wrap:


The other went with the traditional English muffin presentation. 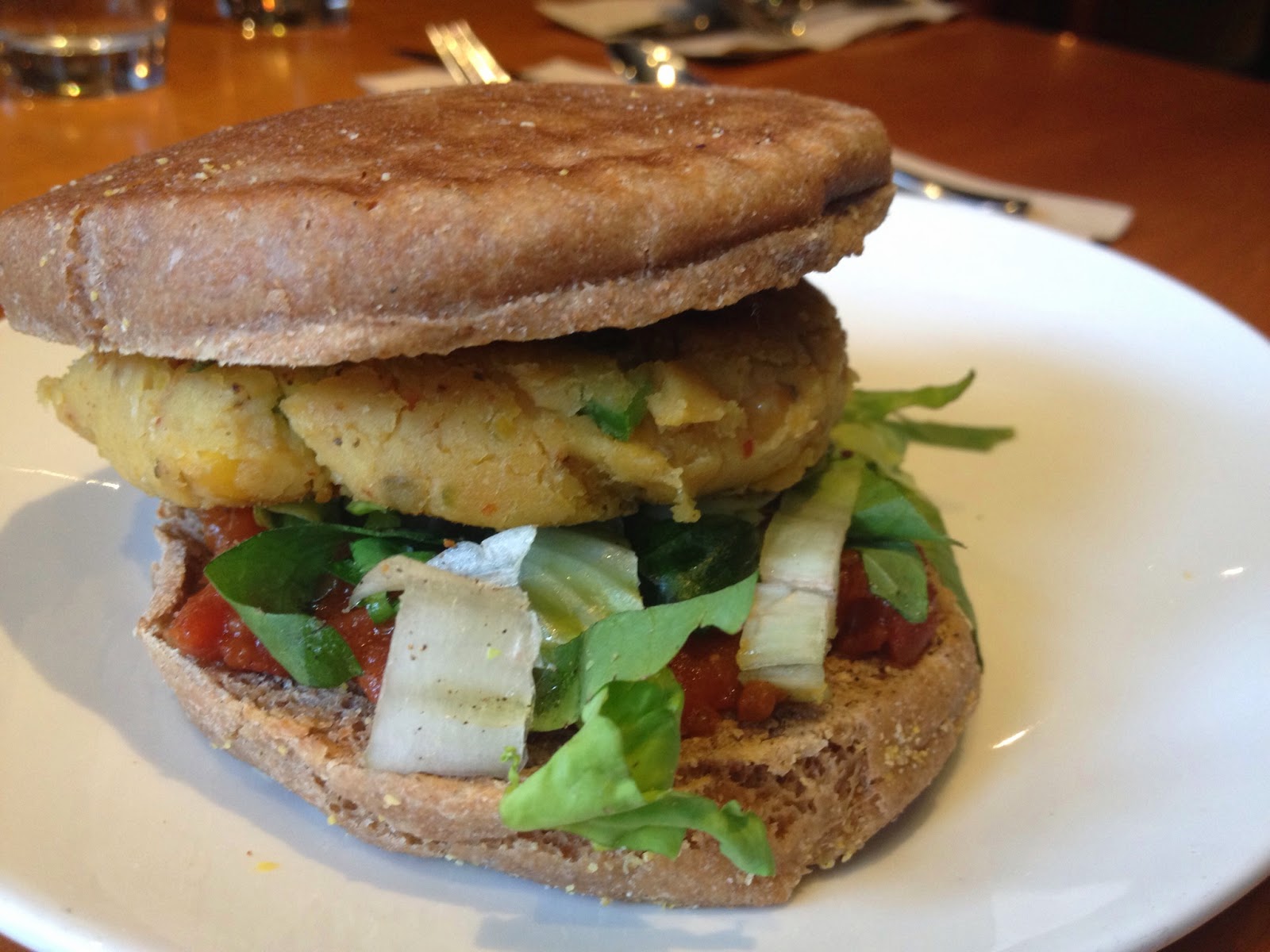 English muffin also ordered a side of steamed kale: with black currants, celery root, and walnuts.  It arrived way to wilted to have been steamed and unexpectedly included the stems, but was reported to be delicious. 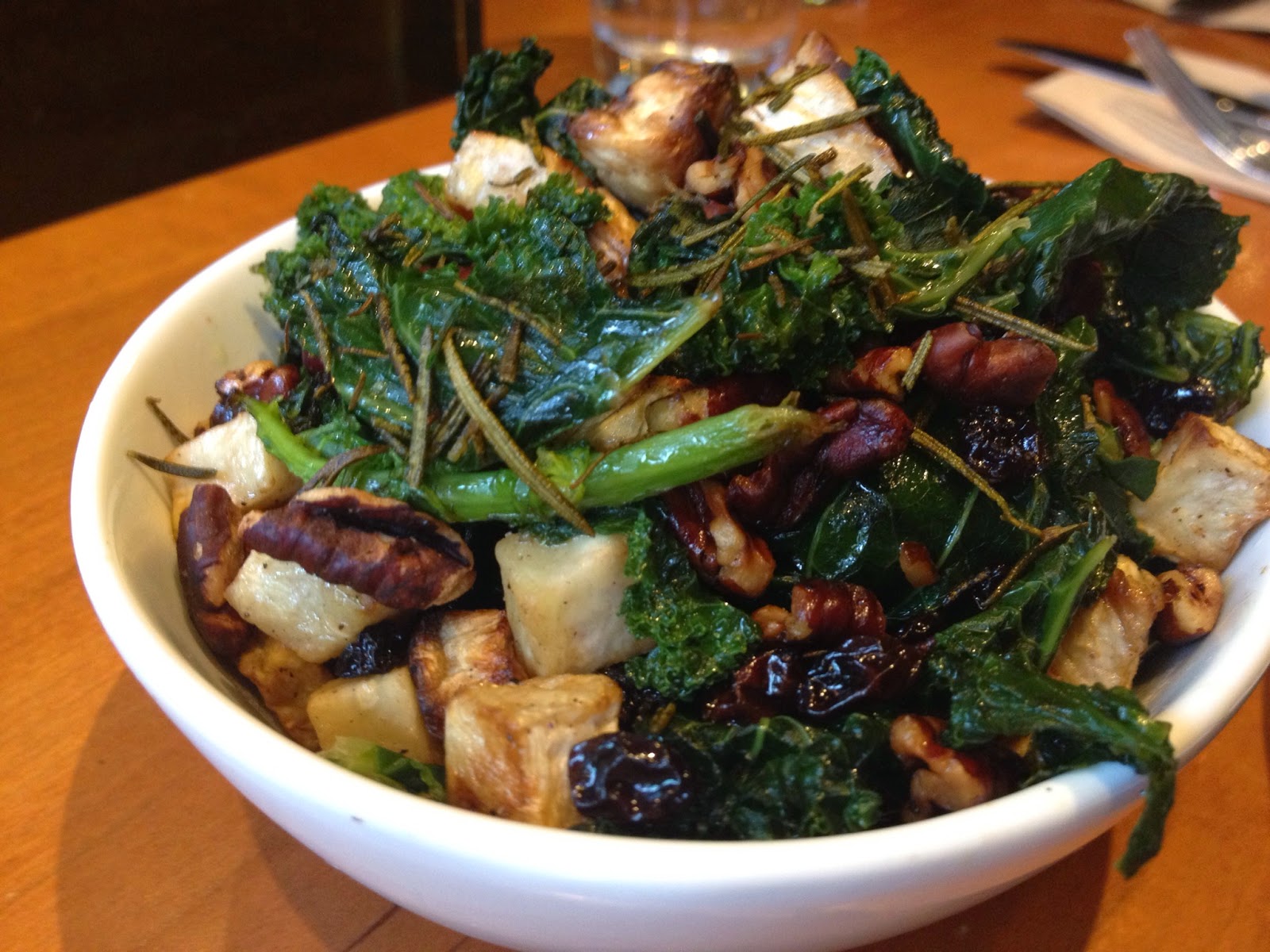 I ordered the green thai tofu curry: with green beans, sweet potatoes, coconut milk, and brown rice on the side.  Extra points for the large, easily removed leaves of cilantro, but there wasn't a green bean to be found; instead: zucchini.  I hate when restaurants make substitutions to menu items without alerting the diner.  And, as someone who has eaten more than my fair share as a result of restaurants who don't know what else vegans eat, I abhor being served zucchini on principle.  Luckily, the whole dish had a very pleasant taste regardless- which was good since our waiter didn't return to check on our meals until everyone was finished and I had about four mouths-full left.  I did ask him why there had been a substitution and he promised to check on it, but never mentioned it again.  It's not like I wanted a plate of green beans to belatedly send to my stomach to mingle with the curry I'd already consumed, but it was off-putting for it to have been dismissed- particularly when the waiter said, "Was it good otherwise?"  Other than the fact that it wasn't as described?  Worse, though, was when he dragged my empty plate in front of my friend from the far end of the table instead of taking two steps over to remove it directly from my place; cringe.

I eat dessert a lot already had my suspicions that I wouldn't be returning to Ellary's Greens, so a friend and I decided to share a dessert.  Incidentally, all of their desserts are vegan.  There was a case full of gluten-free cookies, brownies, and bars- none of which looked appealing to me.  Instead, we chose the chocolate strawberry shortcake from the menu: chocolate cake with macerated strawberries and coconut whipped cream.

The cake was expectedly abbreviated, to be sure, but also more than a little unassuming.  For starters, the "cake" looked awfully like two soft, albeit cakey, cookies.  The coconut whipped cream had a very pleasant texture, but was unexpectedly tasteless.  And, finally, when you're promised macerated berries, slices just simply won't do.


I think I actually enjoyed the dessert, overall, much more than the kale salad gal I shared it with did.  Would I order it again?  No.  Actually, I most likely would not return to Ellary's for anything- just too many things slightly amiss with nothing grand enough to make up for the shortcomings.  Granted, the space is beautiful and the waitstaff pleasant enough, but there seemed to be no vested interest in providing food and/or service befitting the pricing if nothing else.  If I want to distribute silverware and menus to my fellow diners myself, I may as well enjoy a less expensive and heartier meal elsewhere. 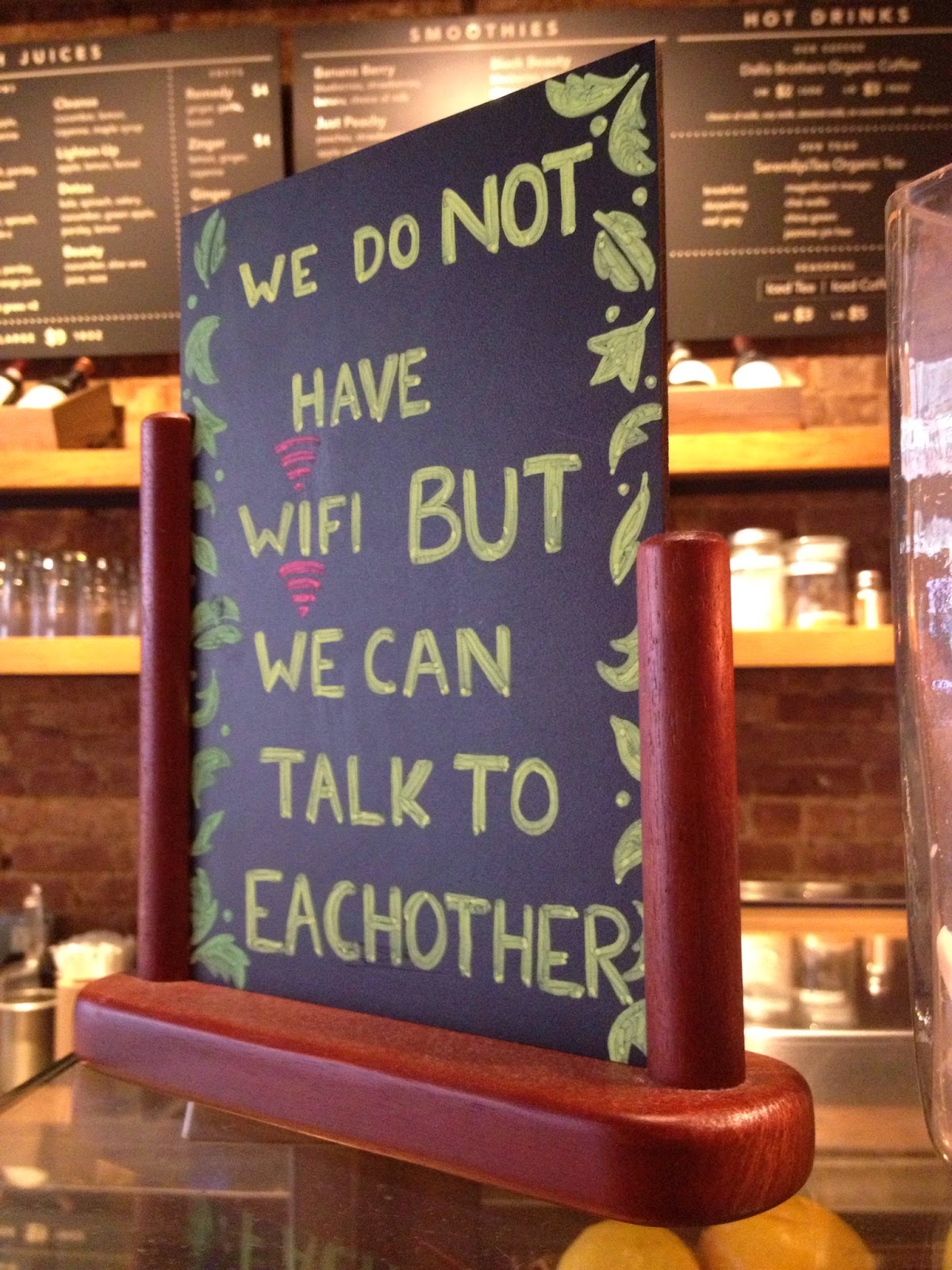 This sign made me smile and we all agreed that the restroom smelled divine, but the details that were missed could not be made up for with a gardenia candle and a little wit. In future, I'll pass.