A few friends and I scheduled a catch-up brunch and wanted to do it up right.  We considered returning to V-Note, but after considering the trek to the UES, chose instead to make an inaugural visit (for most) to the new (Cafe?) Blossom on Carmine.  The visit started off on an especially high note when we entered the restaurant and were greeted by one of our favorite waiters from Sacred Chow.  He was as charming as ever and our waitress was just as friendly.

Blossom on Carmine serves four small black-eyed pea and potato cakes with chili pepper aioli as their version of the coveted appetizer.  They are as good as any, but there is a contentious debate brewing as to the best offering of the pea cakes in all of the Blossom restaurants.  In contrast to these four small, Blossom on the UWS serves two medium pea cakes.  But, at this meal it was definitively decided 2 - 1 in favor of the large, sole black-eyed pea cake offered at both V-Note and Blossom on Ninth.  Frankly, there isn't a pea cake I'd turn down, but BoC's fell a little heavy on the breading side for me; I prefer a much higher proportion of potato: 2 mediums or 1 large prevail. 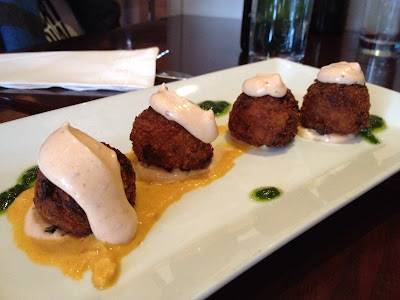 I really like that BoC offers a "lunch" menu that includes both brunch and lunch offerings.  Two of my friends ordered the southern fried seitan: with herb and cheese biscuits, gravy, sautéed kale and they both loved it.  I'm not a huge seitan fan, but I thought it was delicious.  And, while I don't like even the idea of biscuits and gravy, I find brown gravy significantly more appetizing than white; nice choice.
﻿
Our server was kind enough to let one friend sub the brussel sprouts special for the standard kale: a generous portion of humongous sprouts that rivaled the somewhat less impressive (but nicely prepared) serving of kale. 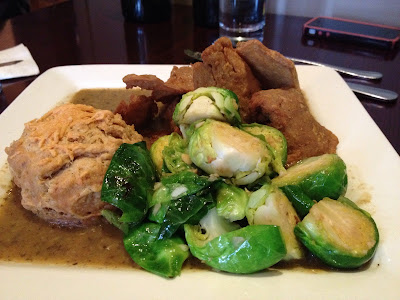 As much as I hate to say it, my banh mi sandwich: with marinated tofu, kimchee, sprouts, cucumber, carrot, mayo, avocado, cilantro, basil, mint, toasted baguette was almost a total fail.  For starters, it was served sloppily on this odd, airy, thick bread instead of a baguette.  The pickled vegetables (carrot, kimchee) were limp instead of crisp, and there was no cucumber or basil to speak of.  Instead, there was the unexpected additon of a sea vegetable- which, in and of itself is unpleasant, but- as an accompaniment to the non-traditional inclusion of avocado, was extremely off-putting.  The only thing good I can say about the sandwich is that the tofu was prepared nicely. 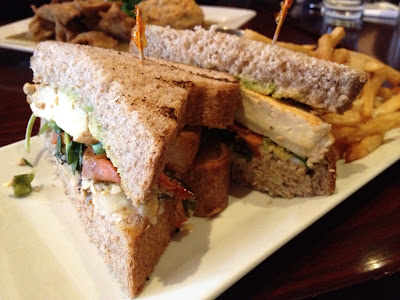 I don't think I've ever in my life sent a dish back, and I didn't make this an exception.  I could almost have forgiven the poor execution, but it would have been nice if I had been- at very least, informed that they were out of baguettes; who eats a banh mi on bread most likely intended for French toast?  And the un-advertised sea vegetable?  I'm sure it's not just me that doesn't like to be surprised with seaweed: blech. 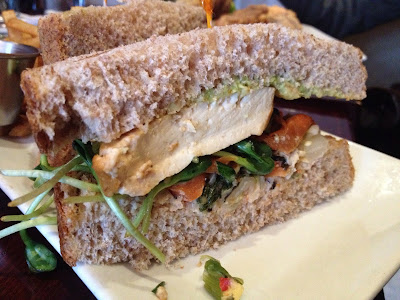 To make matters worse, while our server was kind enough to let me sub their mouth-watering sounding salt and vinegar garlic fries for regular, there was no discernable salt or vinegar taste detected.  Fine fries with lots of garlic- that's it.  Boo. 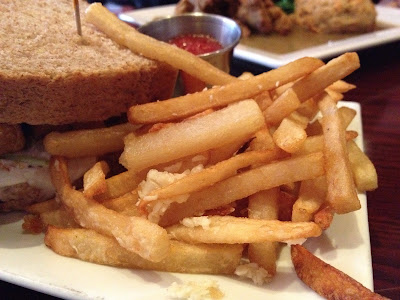 Because I was headed to The Vegan Bake-Off later that day, I made a conscious decision to skip dessert at brunch.  My friend, however, could not resist the chocolate kahlua tart: with date and hazelnut crust, vanilla ice cream that we were all eyeing.  And, when it came out beautifully presented in a mini cast-iron pan on a slab of wood we were all struck unusually giddy with admiration.  This is where the photography stopped because none of us could resist digging in- it was adored even by the non-chocolate lover of the group.  As good as the food generally is, I've never enjoyed a decent dessert at Blossom...until now. 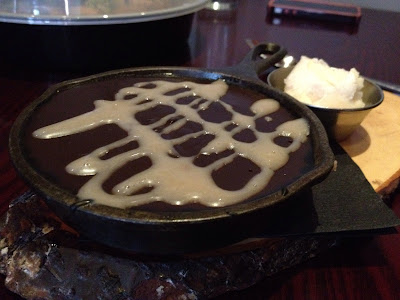 To re-cap, the space is pretty and the staff is refreshingly pleasant, accomodating, and efficient.  Despite my meal having been a huge disappoinment, I would definitely return to give them another chance- perhaps for dinner.  However, it has not gone unnoticed that Blossom isn't new to the game; misses like this plainly shouldn't occur.  They are easily avoidable and won't be forgiven twice.
Posted by Abby Bean at 11:05 AM

Email ThisBlogThis!Share to TwitterShare to FacebookShare to Pinterest
Labels: Blossom, Blossom on Carmine