Months ago, Smoothie King generously offered to send me a gift card so I could try their then-new vegan smoothies "powered by Sunwarrior." Unfortunately, it arrived just as the weather was taking a turn for the worse and I was taking my annual hibernation from smoothies, so I've only just recently visited Smoothie King to have a go at the vegan options. 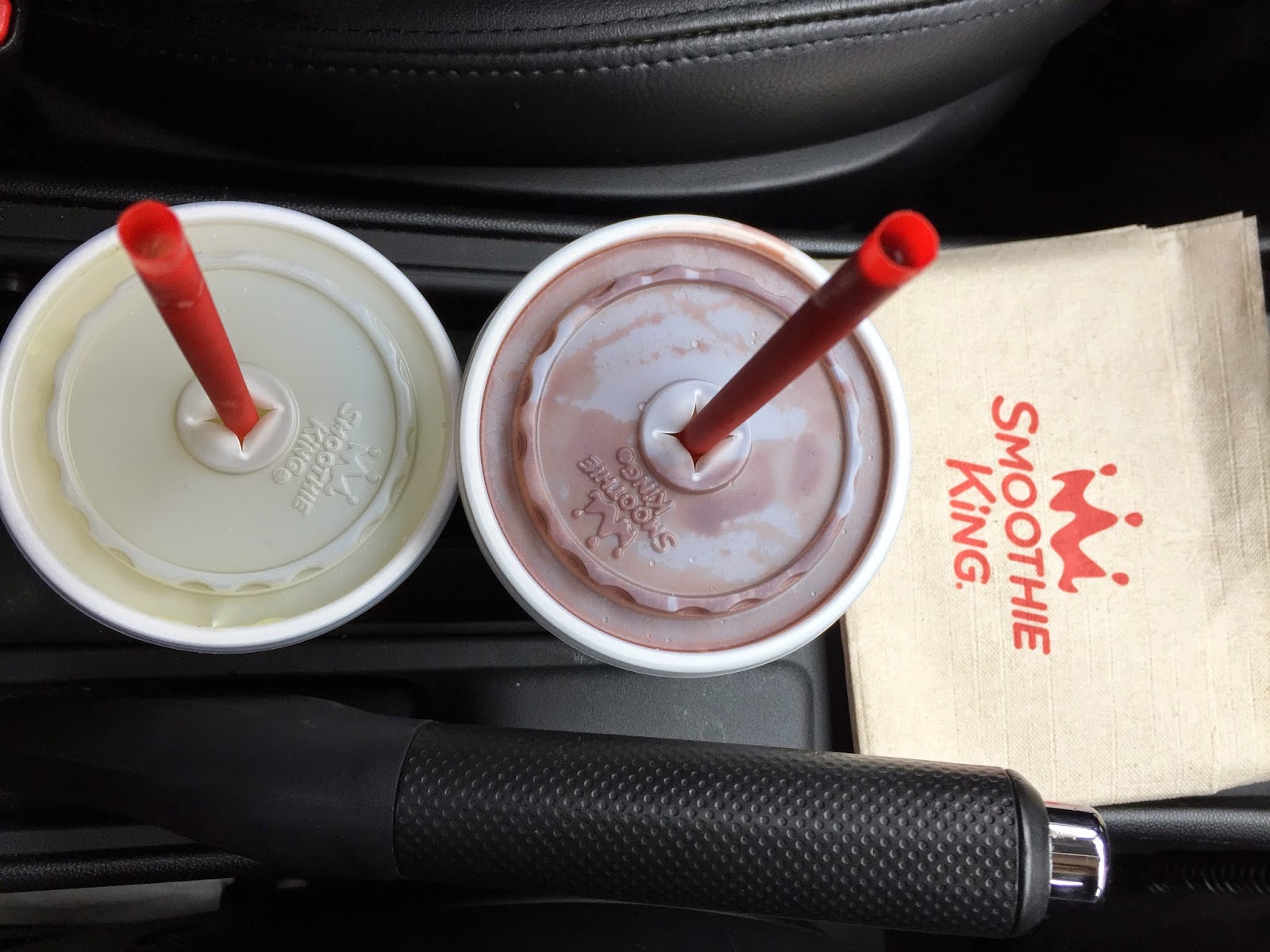 I was expecting two variations to choose from: mango kale and dark chocolate banana, but to my surprise there was a third listed: nutty super grain. I figured it must have been added sometime between now and when Smoothie King had first contacted me.

SK was empty when I visited late morning on a Saturday, and I was greeted happily. It turned out that the sign for the nutty super grain: Sunwarrior raw plant-based protein, almond milk, peanut butter, super grains, 100% cocoa, apple juice, bananas had preceded it's arrival, so I did have only two options to choose from. More importantly, I was happy to see that it was so easy to identify the vegan options on the menu. Two thumbs up on vegan branding, Smoothie King! 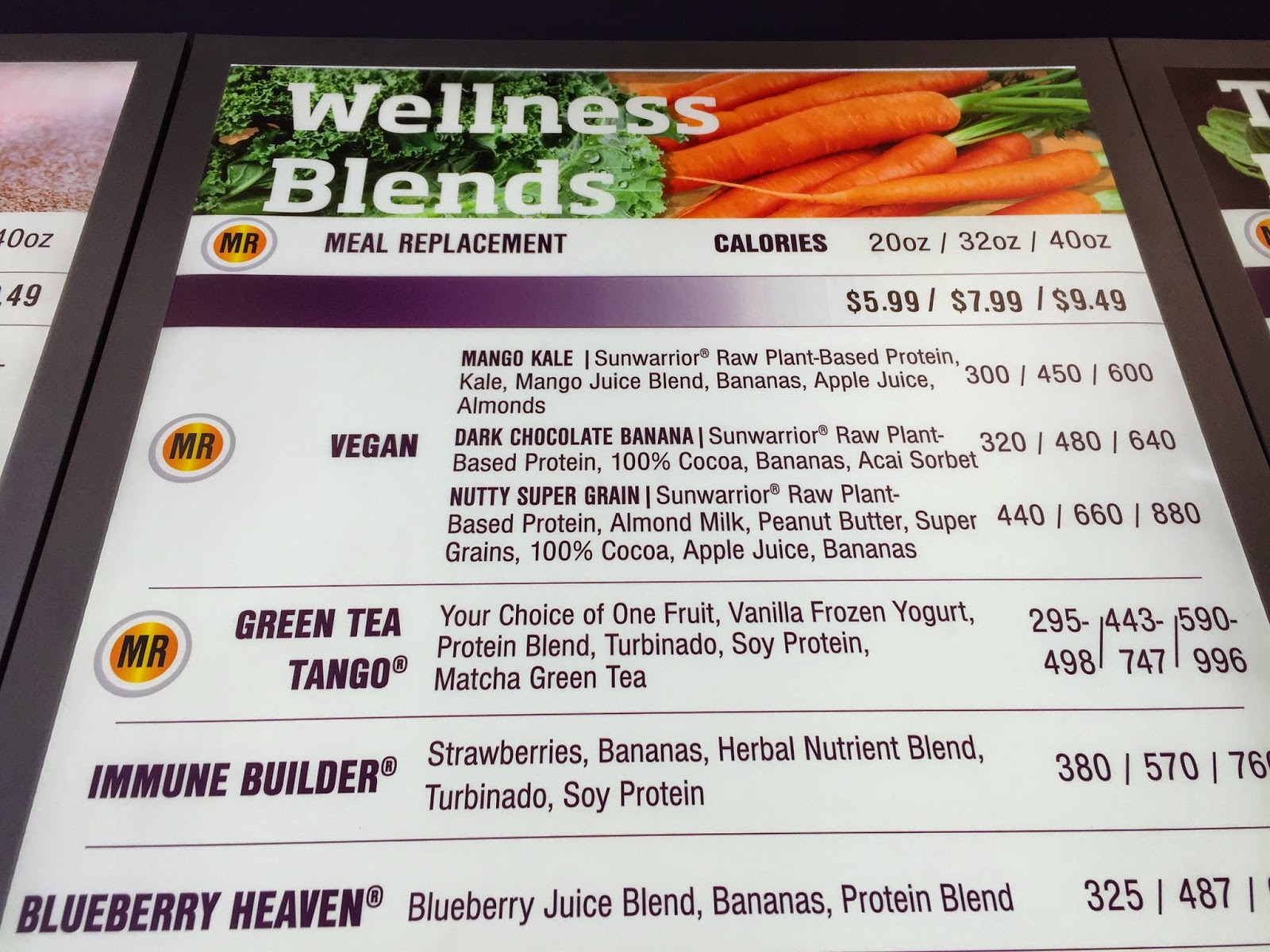 I asked the employee to tell me how much money was on my complimentary gift card and she gladly swiped it to let me know that it was loaded with $7.50. At $3.00/small smoothie*, I decided to get one of each. And, since there were plenty of vegan snacks available, I threw in a bag of salt & vinegar potato chips to use up the remaining dough. 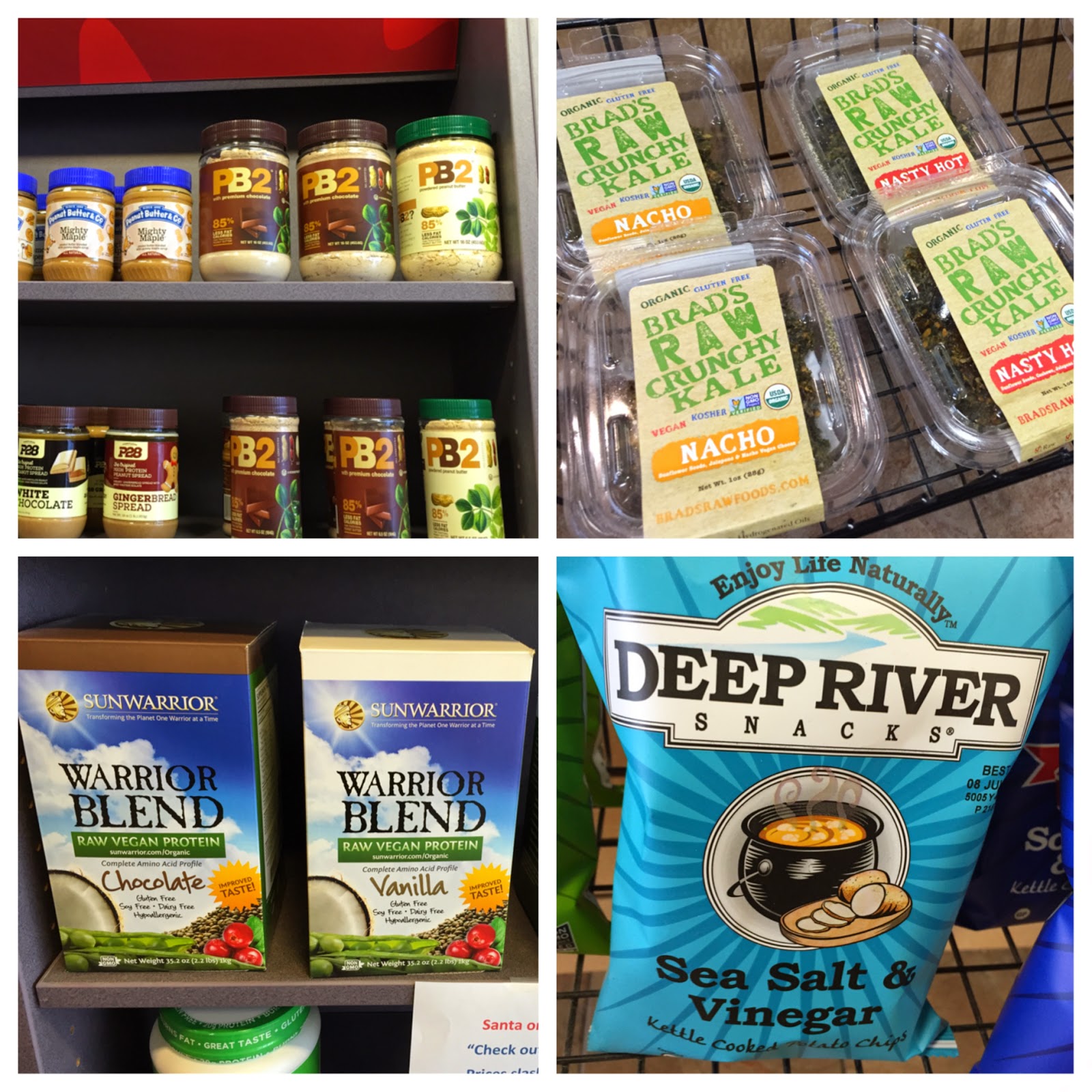 *To my surprise, the total came to almost double of what I was expecting. Apparently I was reading the calorie counts as opposed to the prices. When I explained my surprise, the woman who was ringing me up said, "yeah; everyone does that..." which then begs the question: is it intentional? I eat out a lot and I've never before made this mistake.

I will say that while I wouldn't ordinarily pay $5.99 for a smoothie in the suburbs, weighing in at 20 ounces, it was of significant heft for a "small." However, I was shocked that the cups seemed to be made of styrofoam. I haven't eaten out of styrofoam since 1994 and I have to admit that I thought it had been banned. But, after spending $7.00 in addition to my entire gratis gift card, I decided to throw caution to the wind. Since I thought I recalled that drinking hot beverages out of styrofoam was the real health culprit, I let the environment be damned this time around.

I took these photos of the smoothies before trying them or leaving the store. There's just no prettying up a smoothie. 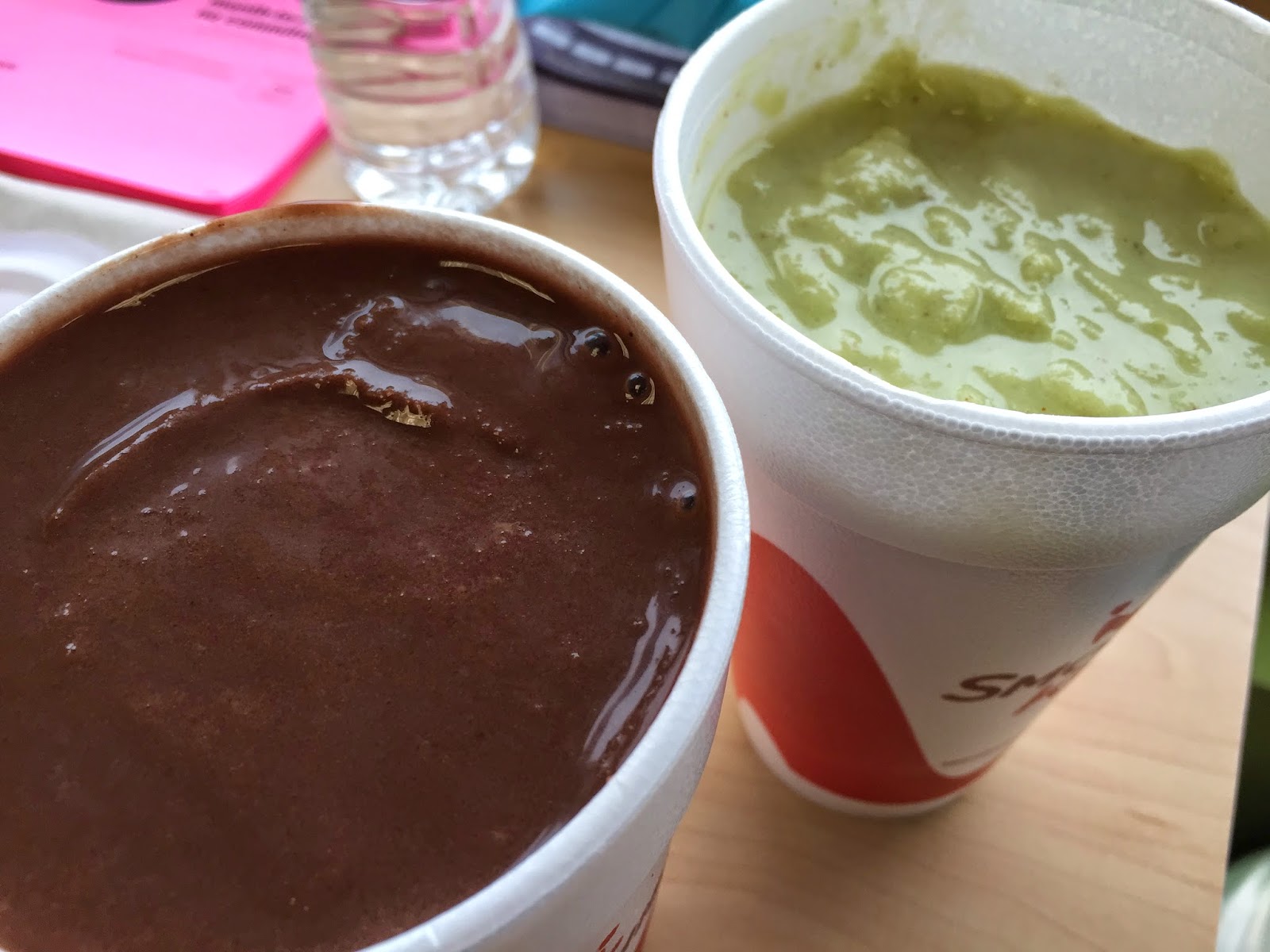 Since I'd gotten two, VM and I took them on the road with us as breakfast. I tasted both and decided that the dark chocolate banana: Sunwarrior raw plant-based protein, 100% cocoa, apple juice, bananas, acai sorbet was my preference. As it added more banana-y flavor the creaminess, I assume that the banana hadn't been frozen. I prefer things the other way around. But, I did unexpectedly enjoy the acai flavor mixed with the cocoa. Overall it was just okay.

VM, on the other hand, declared the dark chocolate banana inedible and said that if she had to pick one, it would be the mango kale: Sunwarrior raw plant-based protein, kale, mango juice blend, bananas, apple juice, almonds. She then promptly refused to take another sip of either. We agreed that there was something gritty about the mango kale; I'm not sure if it was the protein powder or perhaps the almonds hadn't been pureed smooth, but I couldn't drink much of that one. We ultimately had to deliver them both to OD, who will eat just about anything. But after a few gulps of each even he declared that he "didn't wanna." So, 2 smoothies + 3 people = this much down the drain. 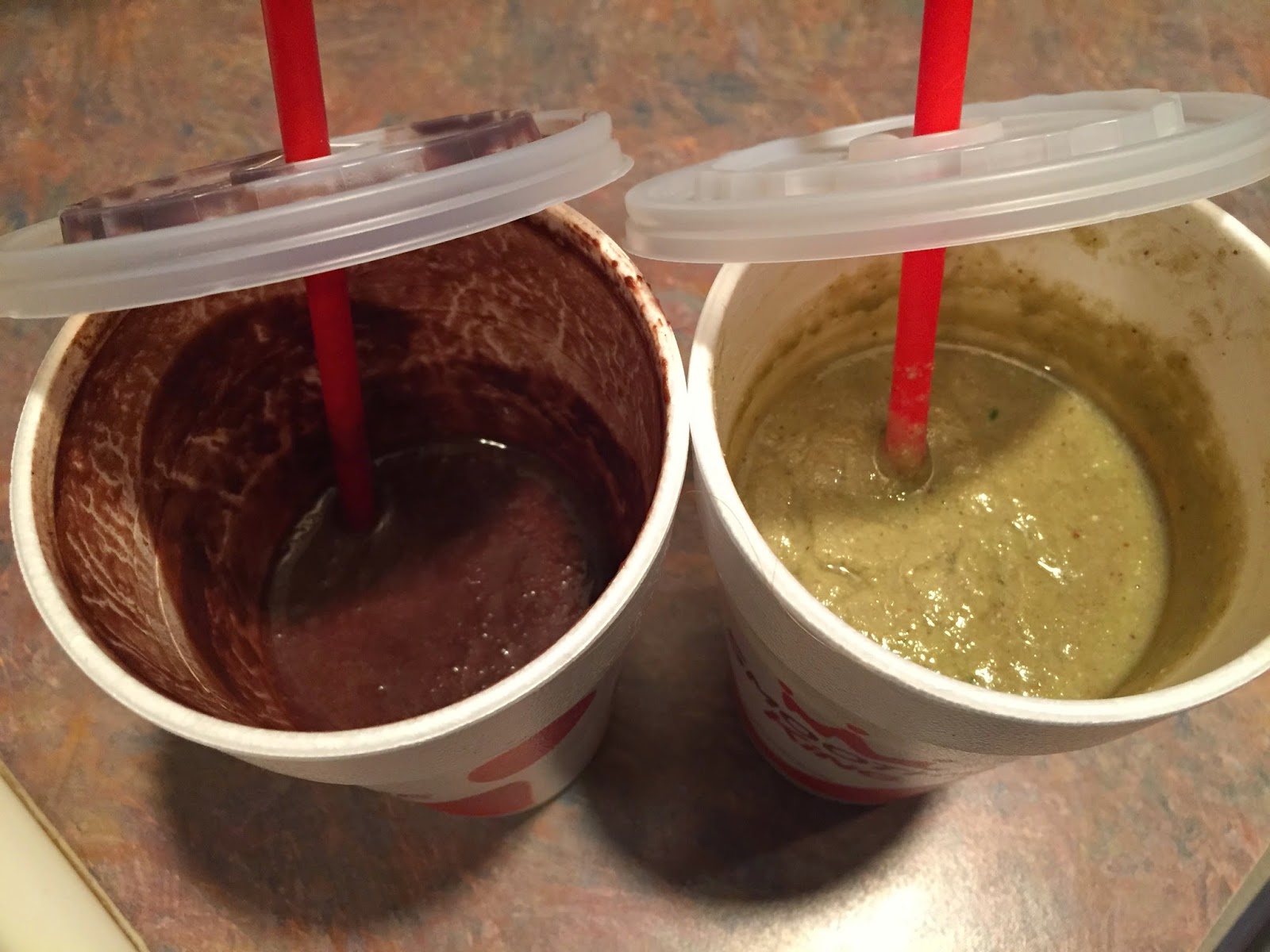 Needless to say, it wasn't a success. Have you had a better experience with Smoothie King? Since it's smoothie season once again in the northeast (almost), what are your favorite smoothies?