So, I haven't been able to blog about Pickle Shack because I've been too busy eating at Pickle Shack, ya dig? 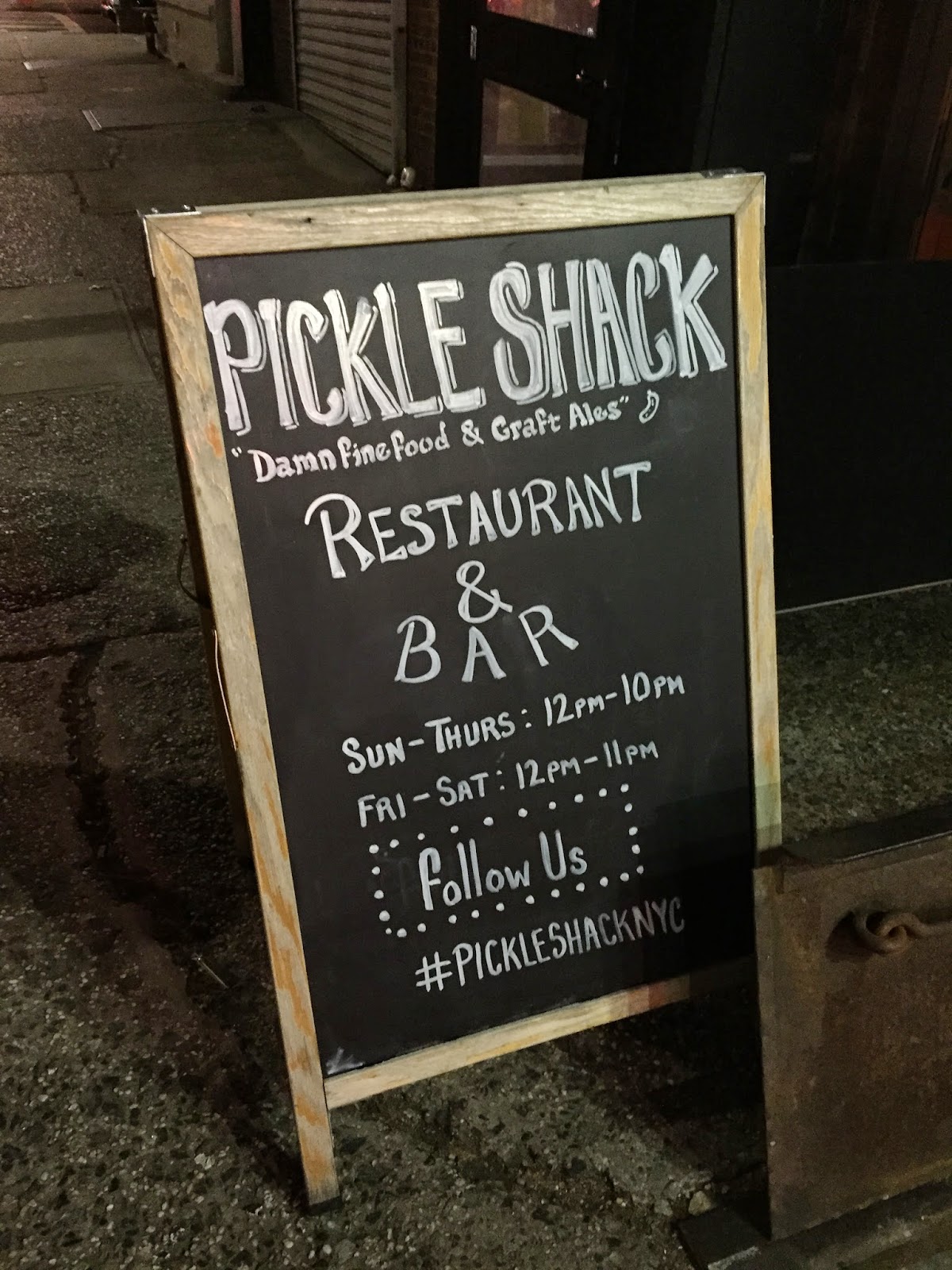 In case you haven't been, Pickle Shack is a restaurant & bar that serves "damn fine food & craft ales." Most people already know this and are as obsessed as I am (dates soon, everyone!). Other people who live in a bubble are all, "But I don't love pickles" and I'm like, "A) what's wrong with you?  and, B) It's so much more than that." In fact, I don't even like beer; the food is just that good!


Pickle Shack is all vegetarian, but many of the items are vegan by default. Those that are not have their vegan counterpart clearly described on the menu and they are thoughtful and creative alternatives: certainly not an afterthought. This is definitely not one of those, "just order without the cheese, butter, and eggs to veganize" kind of places and I really love them for that.

The first time I went I had to start with the fried hot pickles with preserved lemon aioli. I mean, duh. So, so good in every way a glorious fried pickle can be. 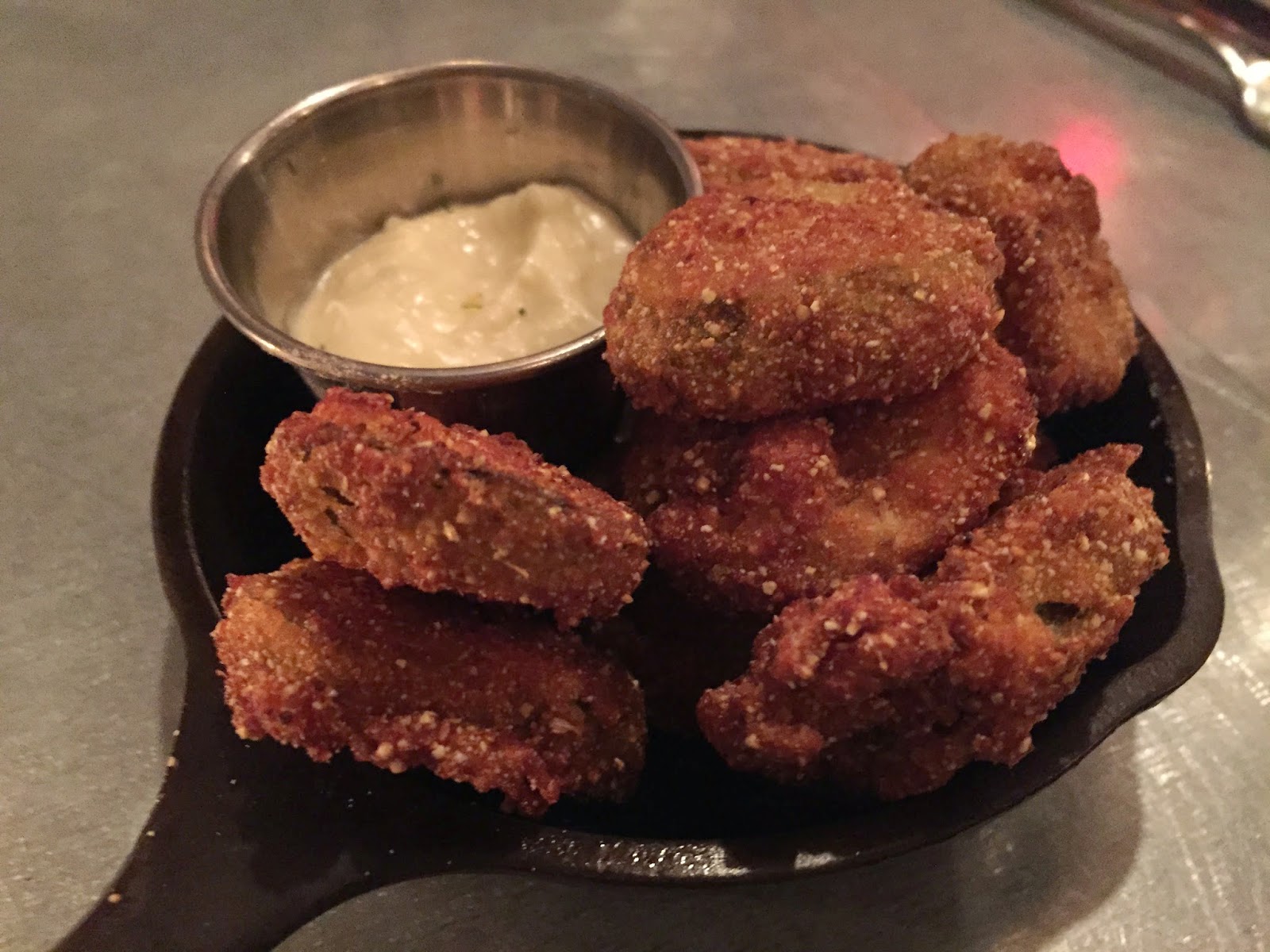 I also shared the vegan version of their fresh California artichoke dip served with crostini: with cashew cream, herbs, & smoked walnuts. It's already been ordered again and again because THIS is how to do artichoke dip right (this is how to do it wrong). 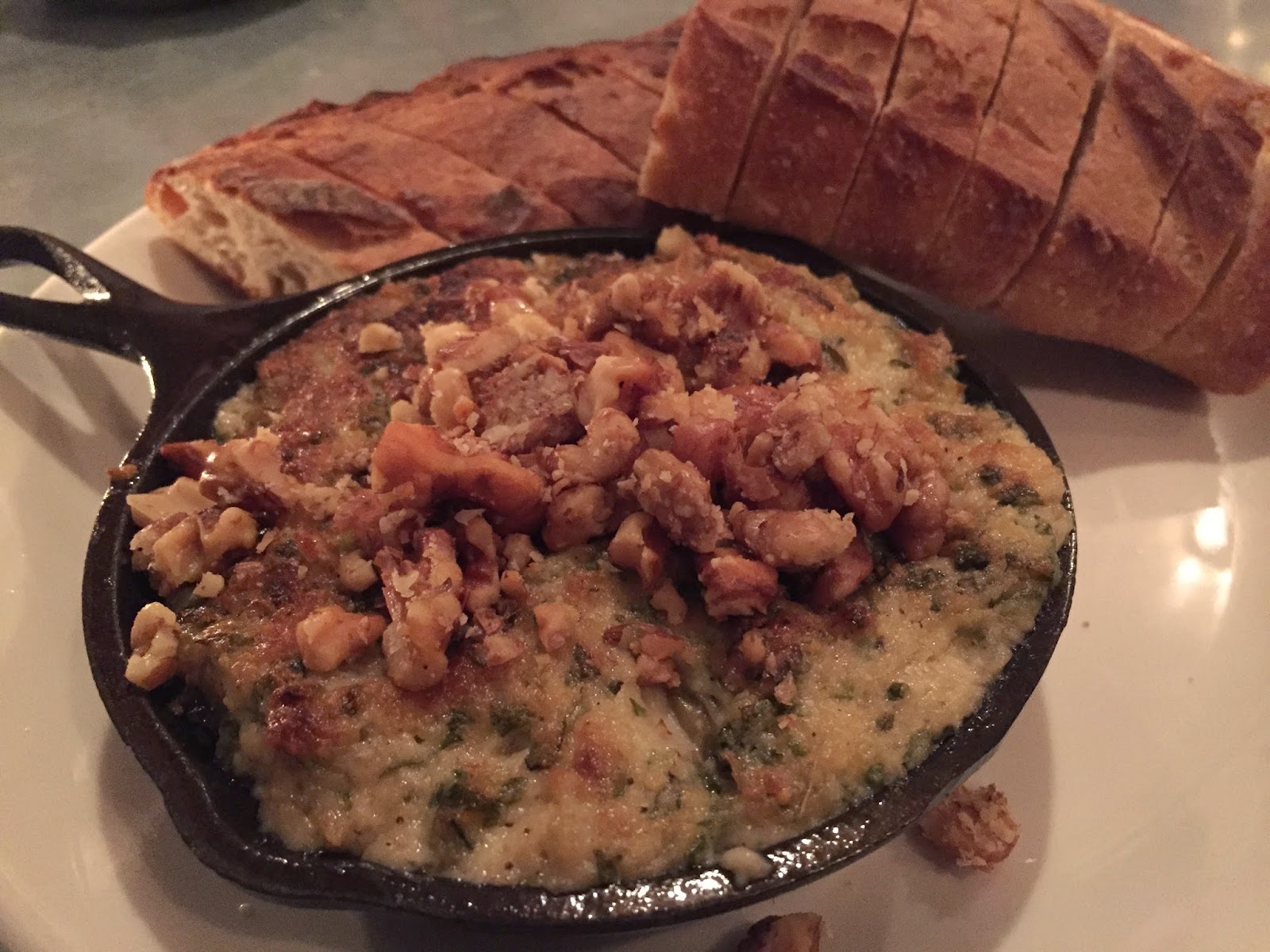 For dinner, a friend ordered the orecchiette, broccoali rabe, pickled hot peppers, parsnip puree with garlic. It looked great (and she thoroughly enjoyed it), but I wanted something heartier. 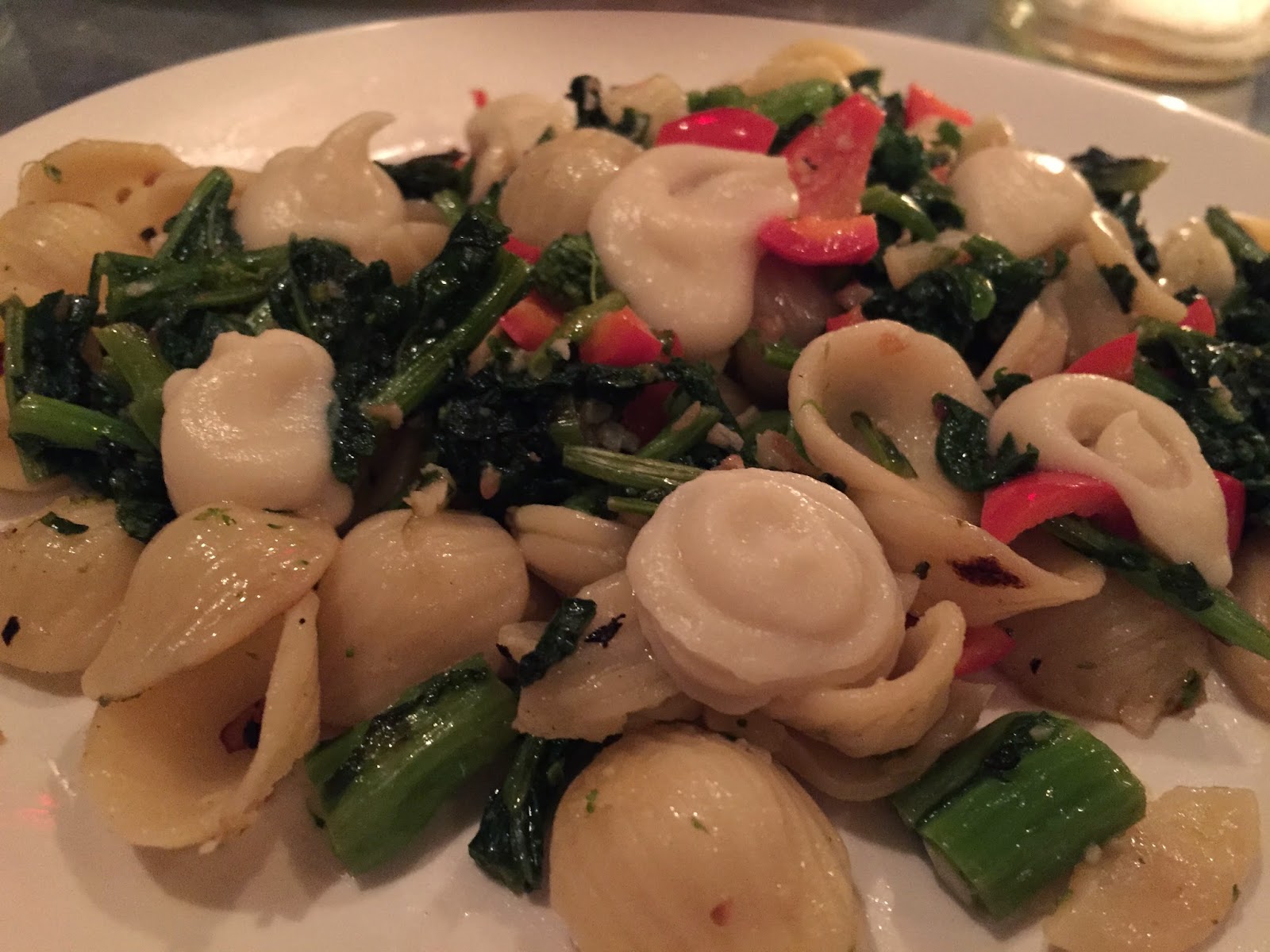 So, I had the scotch ale and wild mushroom pot pie, roasted cipollini onions, braised greens. Aside from not being as liquidy as the low-brow pot-pies I shared with my dad as a kid, it was pretty darn authentic. The accompanying greens were precisely prepared and the onions atop the pot pie deserve their own blogpost. 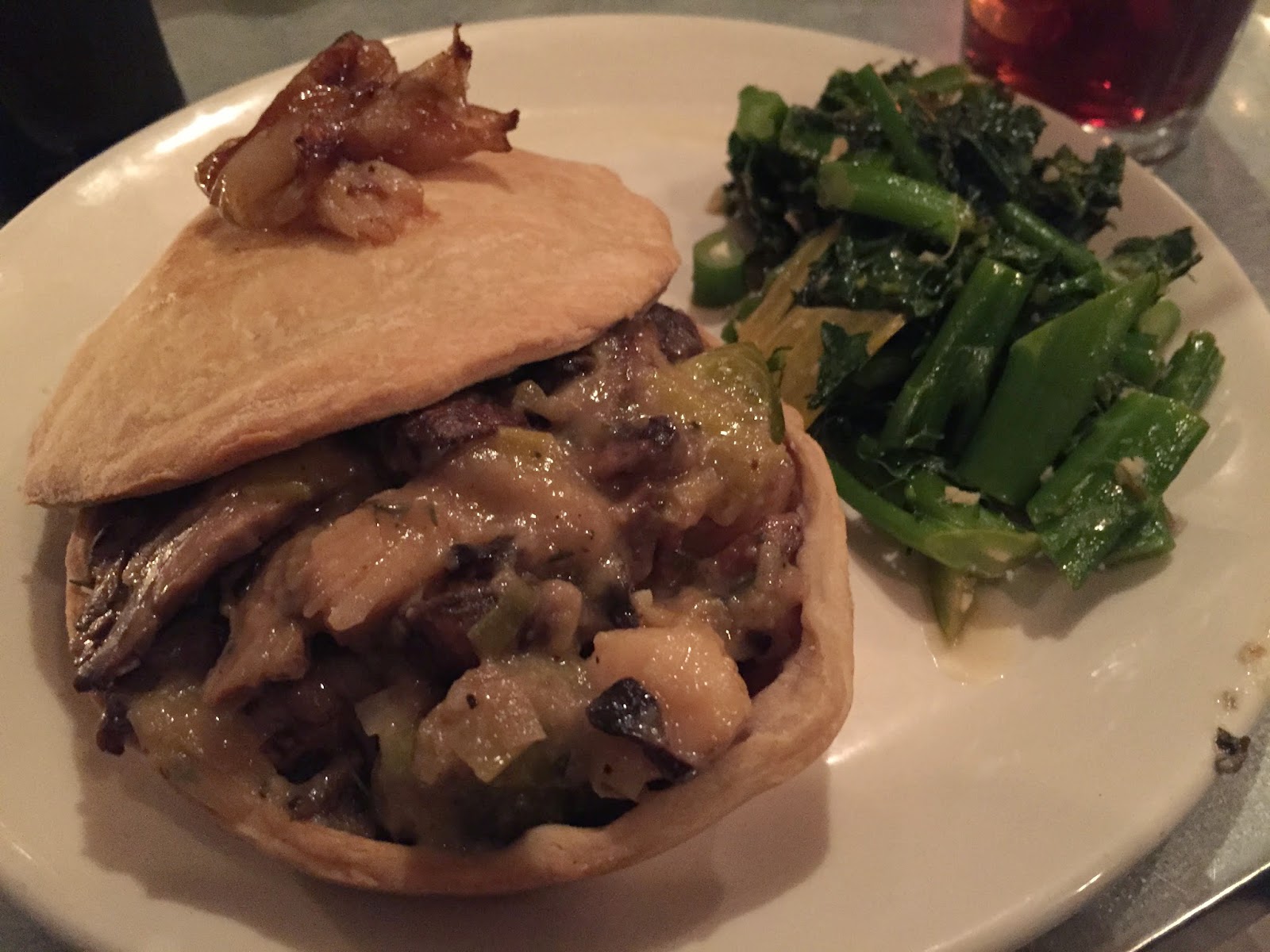 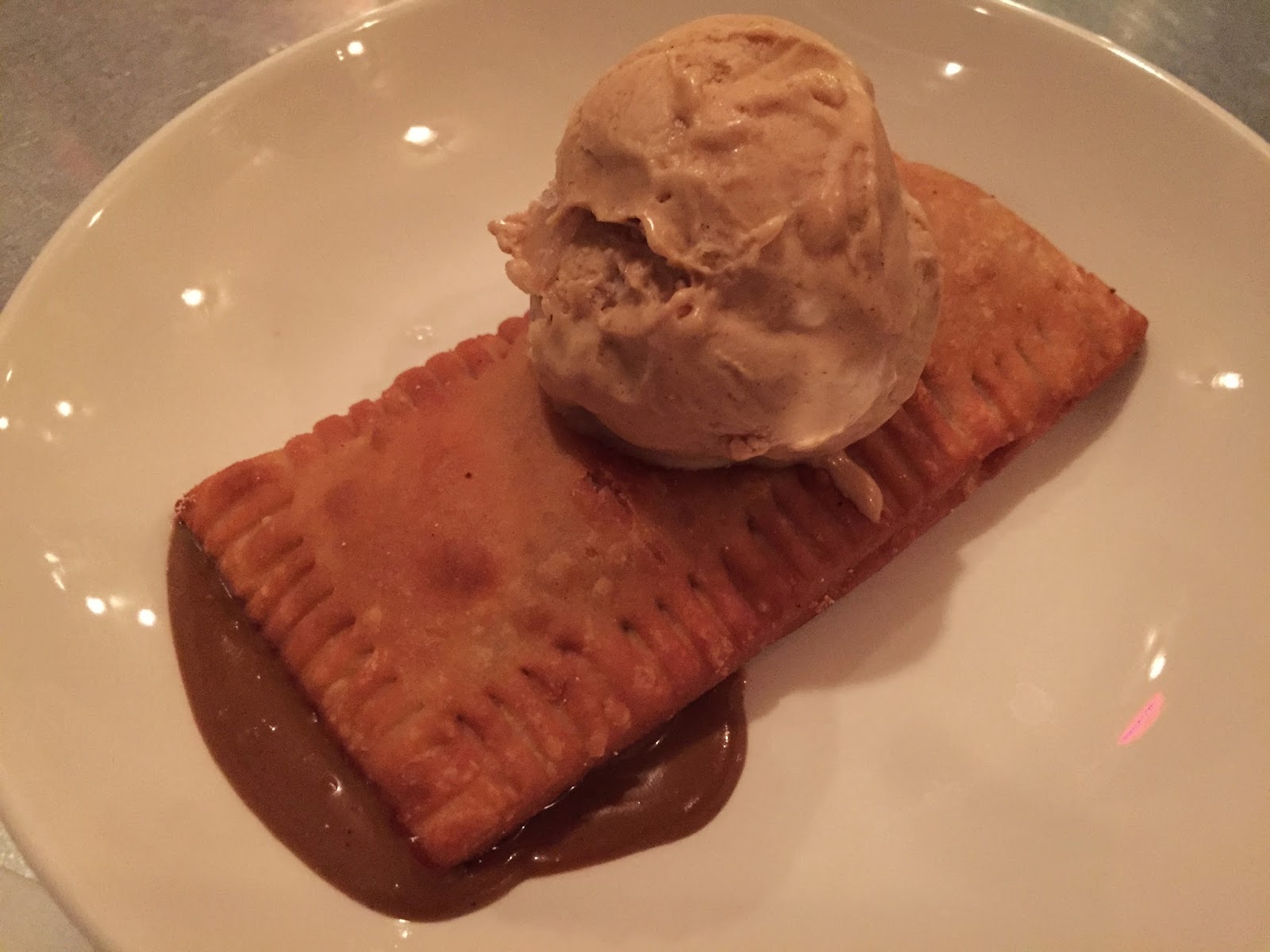 So, let's talk about this. While all the elements of this dessert went together very nicely, I moved the ice cream out of the way at the start in order to focus on the hand pie; I haven't had one since October and, before that, 2009. The crust: incredibly buttery and flaky tasting. The chocolate filling: warm, creamy, and so ideally chocolatey. But the pool of vanilla caramel was so thick and decadent that I had to contact the restaurant later to ensure that it was vegan: the more I thought about it, the more I questioned it. Luckily, it is; go eat it immediately. 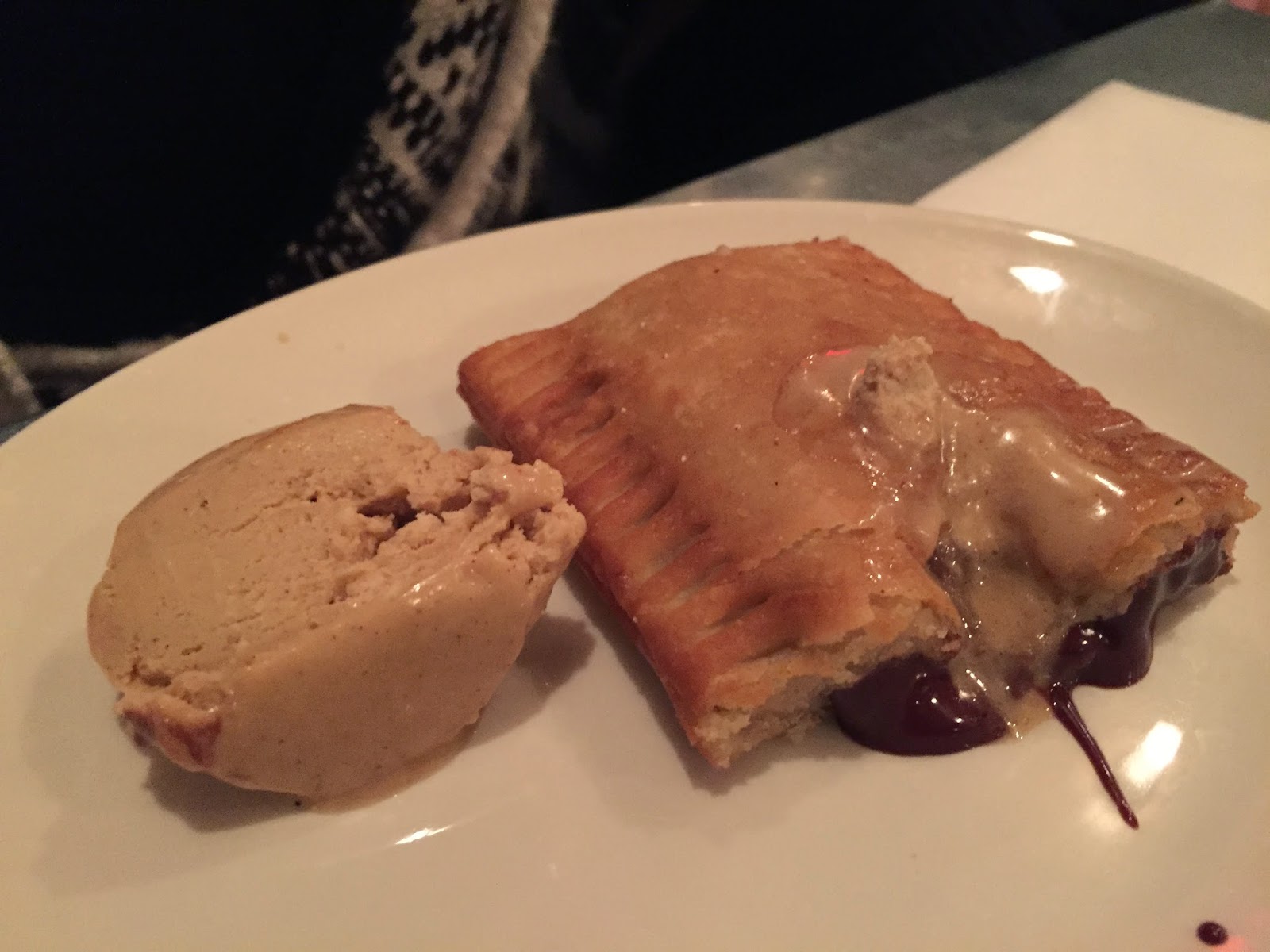 On my next visit I scored the cornmeal battered oyster mushrooms, lemon & fresh cocktail sauce. It was reminiscent of the non-vegan "popcorn" shrimp of my youth, but infinitely better tasting & cruelty-free. Thankfully I was dining with mushroom haters so I didn't have to share a single one. Let's do that again soon, friends! 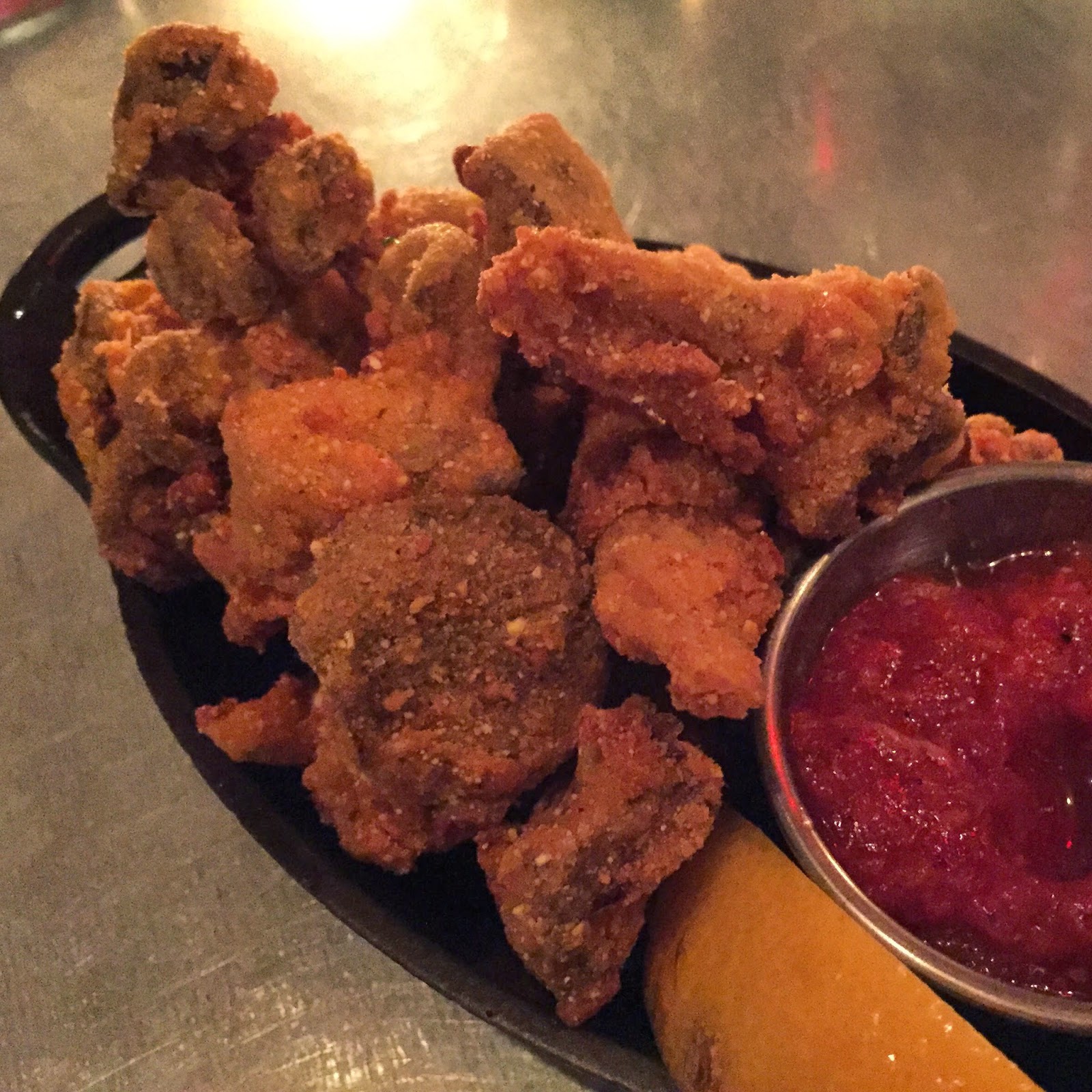 For dinner this time around I caved to the overwhelming pressure of ordering the vegan version of the sourdough grilled cheese, roasted cauliflower and broccoli, pickled sweet peppers, non-dairy herbed cashew cream. Not only was this one of the best sandwiches I've ever eaten (that bread!), but I'm so glad I went with a side of fries instead of a silly salad. 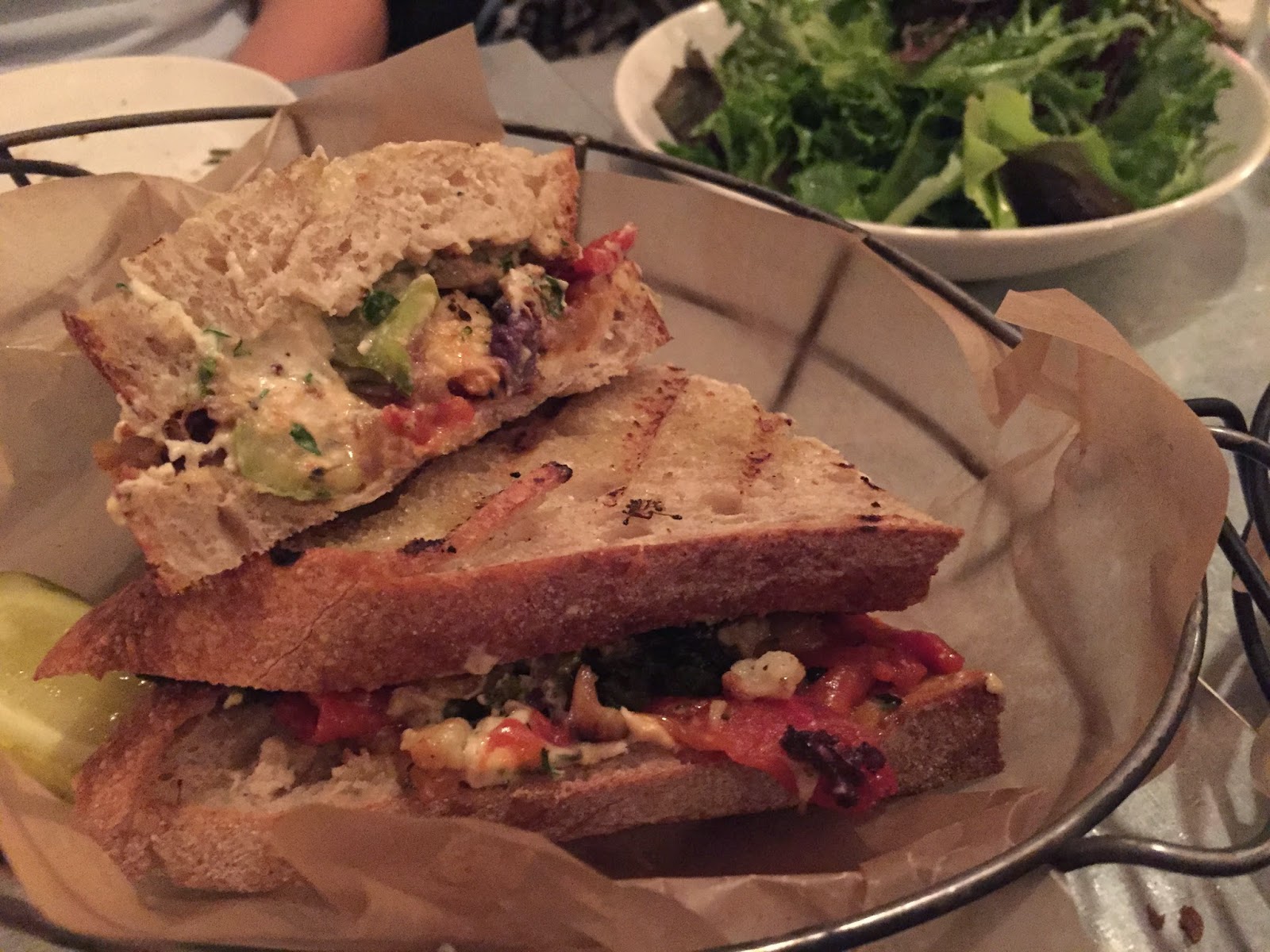 Sorry for the horrid flash; Pickle Shack's lighting is not at all blogger friendly. Just focus on the fries, which are are freshly cut, golden, crisp, and impeccably seasoned. While I was scarfing them down I said, "I think they make their own ketchup!" to which my friend replied, "If they do this well making their own vegan cheese I'm pretty sure the ketchup is no problem." Point taken and appreciated on all counts. Further inspection of the menu revealed the description, "thrice cooked yukon gold potatoes with fresh dill, sea salt, house ketchup." 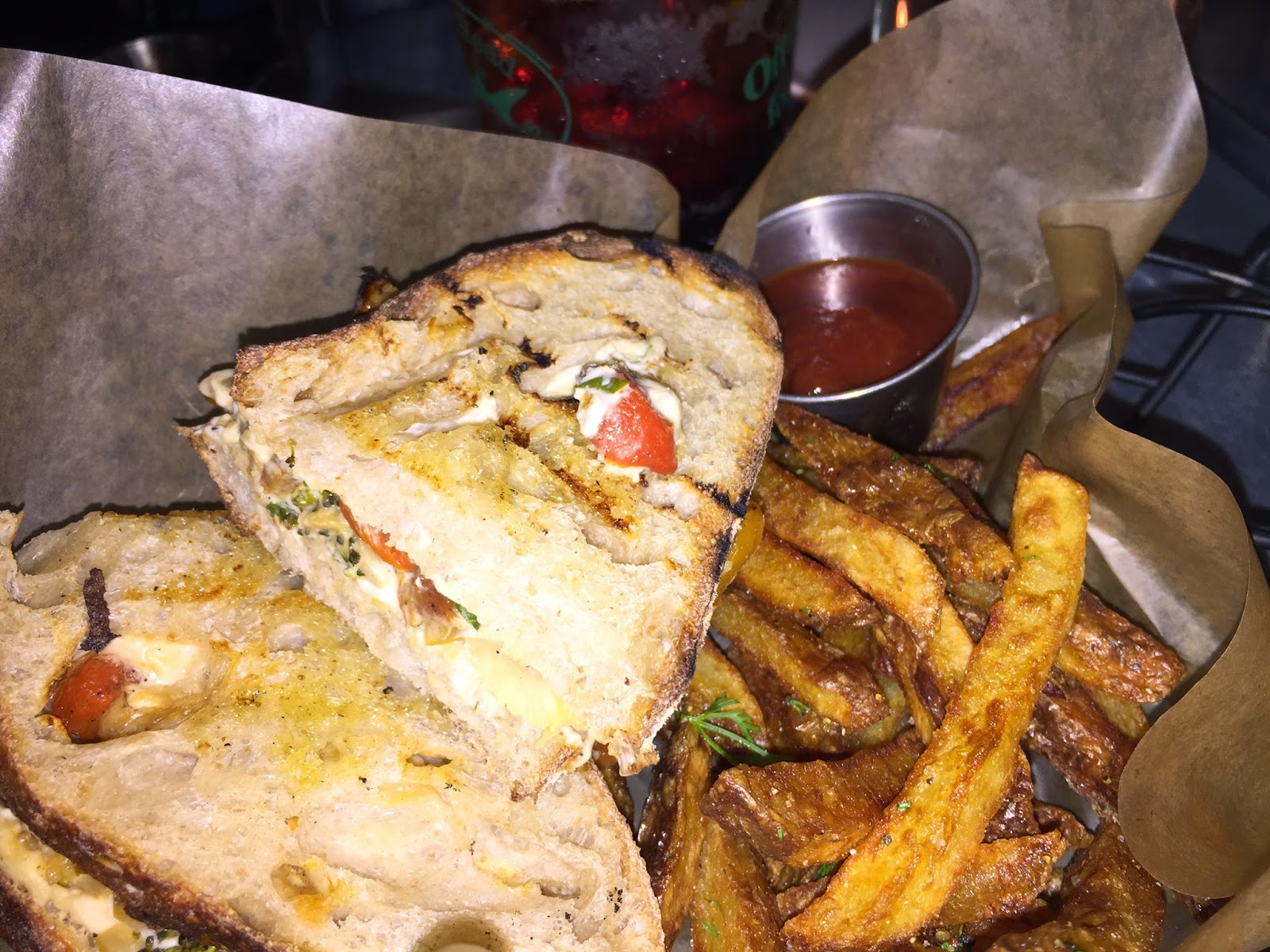 So many of my friends share in my infatuation that we're constantly finding reasons to go to Park Slope. In fact, I currently have 3 tentative meetups and I know what I'm ordering next (I'm coming for you, pulled "pork"). Hope to see you there.

Read more about Pickle Shack from our friends at Raven + Crow Studio.
Posted by Abby Bean at 12:17 PM