As much as I love Ethiopian food, I never tried Bunna at Vegan Shop-Up because I'm a tried and true Snail devotee. Then, once I started making my own, I was on an Ethiopian restaurant hiatus for quite a while; Teff Love is that good. Upon reflection, I also was a little perplexed by the fact that an all vegan restaurant would choose to serve T'ej, a traditional Ethiopian honey wine that is made from- well, honey. But, since no one was forcing me to order it, when a friend whose opinion I trust gave his recommendation of the Bunna Cafe restaurant, I decided to finally check it out. 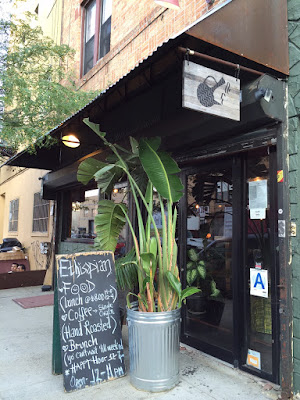 Our group was really excited and we arrived at the stroke of the hour. The host promptly went to seat us, and I informed him that we had a reservation so that they'd know that our party had arrived. He hesitated, looked at his list, and informed us that our reservation had been for the previous night and we hadn't shown.

I'm no expert in crummy things to do to restaurants, but if I were in the habit of skipping out on a reservation, I'm pretty sure I wouldn't show up the following night all chipper-like. That being the case, I would think that it was pretty obvious that there had been a mix-up somewhere and it was probably in the restaurant's best interest not to kill an entire party's anticipatory buzz upon arrival. So, I explained that I had made the reservation the day prior for the following day and we had kind of a stare-off for a moment before being silently seated at one of the empty tables.

Our waiter barely offered us a welcome and didn't do or say anything to introduce us to, what I imagine is for many, eclectic fare. Nevertheless, we immediately ordered appetizers and I ordered an iced shai: Ethiopian spiced black tea with ginger, cloves, cardamom, and cinnamon. I am a huge fan of Ethiopian tea and I was excited to have it, for the first time, iced. Unfortunately, the shai was excruciatingly sweet and the cinnamon completely overshadowed the other spices. 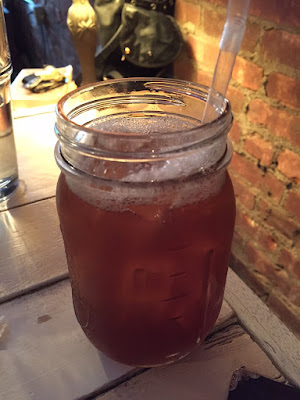 The sambusa appetizer: two triangular pastries stuffed with lentil/pepper mix & served with a spicy cilantro sauce arrived sitting in a little puddle of oil, but they were easily twice the size of versions I've had elsewhere. As my hatred for cilantro runs deep, I skipped the accompanying sauce. They were full of perfectly prepared lentils, but there was little in the way of flavor or heat; I can only assume that was all expected to be provided by the sauce. 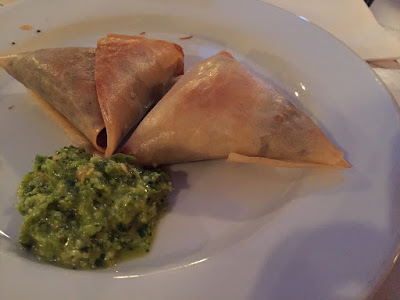 I'm also not a fan of dried fruit, but since I love butecha I couldn't pass up the butecha selata: kale, red onion, lime, dried cranberries, mixed with butecha: a vegan stuffing made of chickpea flour, onion, peppers, and turmeric. I think the ratio of (well massaged) kale to butecha could have been lower, but the real problem was the fact that the dressing seemed simply to consist of entirely too much olive oil. 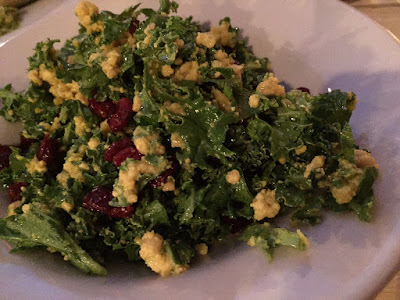 Although there was no guidance or suggestion whatsoever from the waiter (he actually just appeared at the table and said, "So, what are you eating for dinner?"), it was a no-brainer for me to order the largest sampler platter on offer: the combination feast of all nine options. It was delivered to the table with zero fan-fare: there was no explanation of the dishes upon presentation as is customary with Ethiopian food. The photo that appears below is the sampler for two: separate portions of each of the nine menu items that I can see now were plated with significant disproportion (sorry for eating the larger side, MVG!). The platter was served with two injera per person and each additional piece was $1. This seems a little steep- particularly since Bunna cuts their teff with barley flour. "Gluten-free" injera (presumably no barley) is available if ordered 1 day in advance, or basmati rice can be substituted at a moments' notice for $3. 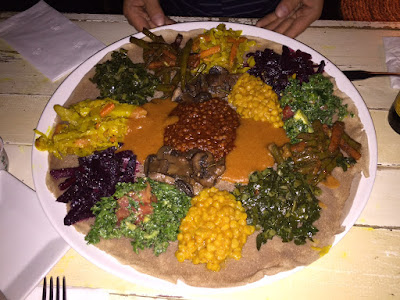 As for the meal: it was unfortunately way more meh than yay.
One of my all-time favorites, gomen: steamed collard greens and onion, was flavorless.
The misor wot: red lentils cooked with spicy berbere sauce, was so salty, I was the only person at the table to eat their portion.
I enjoyed the shiro: ground split peas simmered with garlic, ginger, and herbs.
The mushrooms in the enguday tibs: crimini mushroom sauteed in rosemary, garlic, peppers, ginger, & onion were perfectly cooked, but the rosemary was so heavy-handed that this dish was left over on every plate of the table.
In my opinion, the best thing on the plate was the yatakilt alicha: cabbage, potatoes, carrots, and turmeric.
As you can see, the keysir selata: sauteed beets, carrots, and potatoes served chilled was served lukewarm sans carrots and potatoes. Others at the table loved them, but I found them to be quite boring.
Kedija selata: kale, lime, peppers, tomato, onion, and avocado in olive oil was the only cool dish on the platter, but it was made far too rich by the oil and avocado to act as an appropriate counterbalance to the other rich, warm dishes on the plate.
The seasonal faslia: sauteed string beans and carrots, was also perfectly cooked, but lacking any discernible Ethiopian flavor.

I've since heard that Bunna generally inquires of diners how spicy they'd like their dishes, but we were not asked and there was nothing on my platter with even a modicum of heat.

Disappointingly, there is but a single dessert option available at Bunna. But, before we could even consider after-dinner drinks or dessert, the bill was unceremoniously set on the table. And, so: our meal ended with as much unwelcome as it had begun.

A vegan, Ethiopian joint in Brooklyn should be an oasis. For me, it was a dud.
Posted by Abby Bean at 3:50 PM