I know I always say it, but Bethlehem Vegfest is my favorite vegfest and this year was no exception. What's not to love about an outdoor, pet-friendly, all vegan fest? Did I mention it's free admission and all-welcoming? Yep; it is. 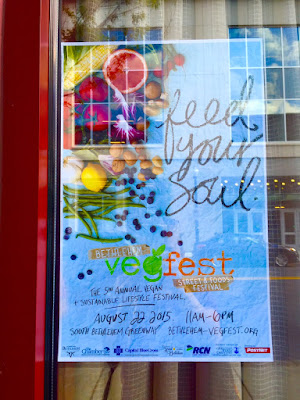 89 and I were decked out in our message wear: me in Vegan Police Shop and 89 repping The Tree Kisser. True story: a little later in the day, a (possibly vegan) woman waiting for her lemonade alongside me asked me about 89's shirt and, when I explained that she was vegan, informed me that "dogs can't be vegans!" WRONG! Totes vegan, totes thriving. She didn't want to hear it and literally turned her back on me in dramatic disgust- I felt as thought I'd met an online troll in real life: someone who just wants to make derogatory and judgmental comments without defense or conversation. So not interested in that; move along with your haterade. 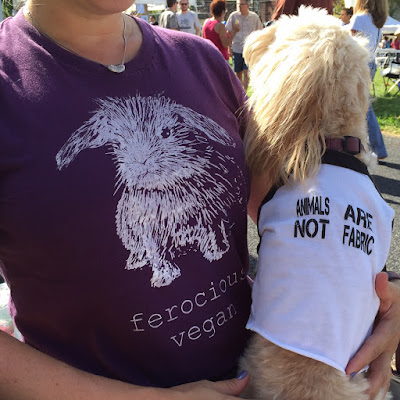 VM was stylin too, but it proved a little difficult to squeeze all of our shirts into a selfie. Here she is modeling Herbivore, Matt & Nat, and Franklin Hill Vineyards (more on that later). 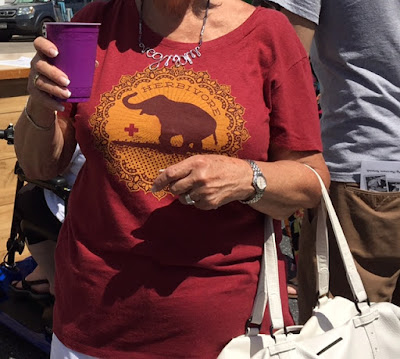 We began our day at Vegan Treats because that's how we roll. We I chose a few donuts to "share": glazed sprinkles, powdered cannoli creme-filled, and a cronut. 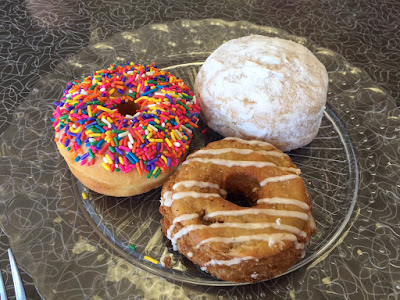 And then I noticed that they had chipwiches... What's a girl to do? 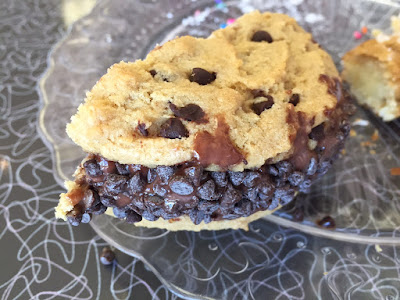 We shared that one (for real), but here's a whole one in all its glory from another day for you to appreciate. 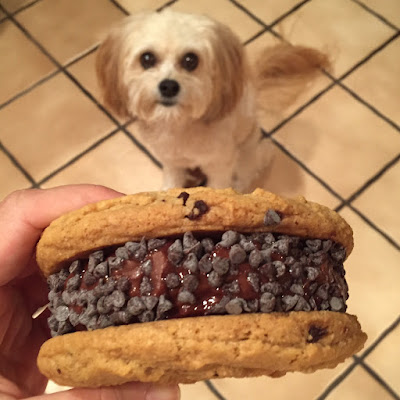 Then it was time to head to Vegfest! I thought it was really cool that it made it to my GPS: we've hit the big time, my vegan comrades (or not; I really don't know how GPS works). 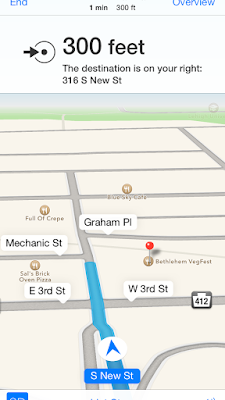 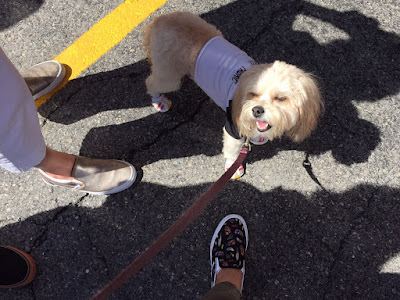 First stop: the Compassion Co. booth for these pins I've been coveting. I've been a big fan of their shirts for their impeccable designs, obvious quality, and admirable ethics, but I'm an even bigger fan now as a result of my respect for The Bearded Vegans. 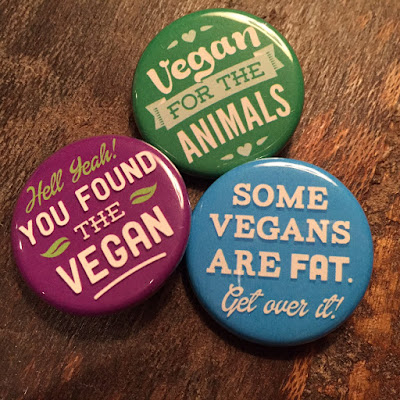 After that I made a beeline to mompops for a strawberry lemonade popsicle for... 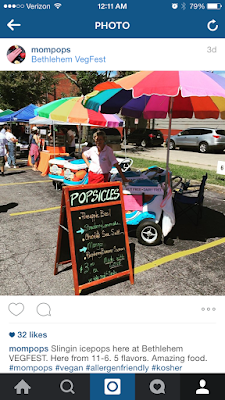 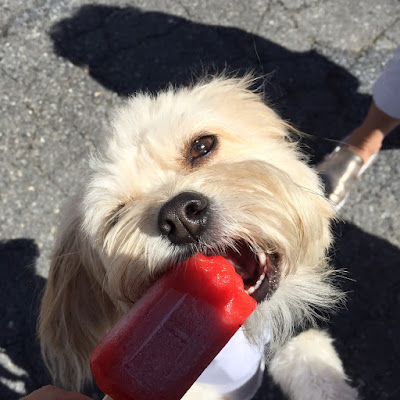 I saw more people walking around with a mompop than without. It was the perfect storm of refreshing and convenient. Even people waiting in the extremely long food lines were enjoying mompops as they waited.

Because it was so hot, throughout the day I had a few forgettable and/or un-enjoyable drinks from various vendors- most notably a hot mess of pureed blueberry and lemon juice that was passed off as a "smoothie" for $6, but VM fared better in that department by visiting her fave tent: Franklin Hill Vineyards. She had their fainting goat red wine infused with natural cherry: served over ice with fruit. Somehow she discovered that the young woman at the tent was a vegetarian like her and, because vegetarians confound me more than omnivores, I butted into the conversation to find out why she wasn't vegan. She told me that she didn't eat meat because she didn't want an animal to die, but she didn't see what was wrong with dairy or eggs. Because VM gets very nervous around me in situations such as this, I simply suggested that she visit the speaker tent later on that day because Vinny DePaul was going to discuss "Transitioning to veganism." It was at this point she started telling me that she only eats milk and eggs from a farm down the street from her where she knows the animals are treated well and the farmer only "takes" the "excess" milk. I asked her if she knew where the baby cows went and she assured me they were all kept on the farm- even the male calves. Since that's not a likely or sustainable farming method, we went back and forth with me trying to explain and her trying really hard to be right- to be able to justify knowing that animal exploitation is wrong except for in the kind way she is participating. As for me, I was just getting more and more annoyed- not because I was impatient that she doesn't know what most vegans know, but rather: for one, I find it ever more interesting that even though factory farms produce over 95% of the world's eggs, every thoughtful vegetarian I meet assures me that they're not getting their eggs that way. Second, I want to take the day off at Vegfest; I don't want to have to debate with a vendor at a vegan event why there's no right way to do the wrong thing. Third: I don't want VM mad at me.

After that lively debate we headed off in search of lunch. To say The Cinnamon Snail slayed it would be an understatement. VM unofficially awarded them the "longest line for the longest time" award; it was a sight. Because we're spoiled in that we can catch them at events in New York and New Jersey, we decided to grab something new instead. To give you an idea of why we made that decision, here is the view of the front of the Cinnamon Snail line from the relatively tiny line we waited in for our food; you'll notice you can't see the end. 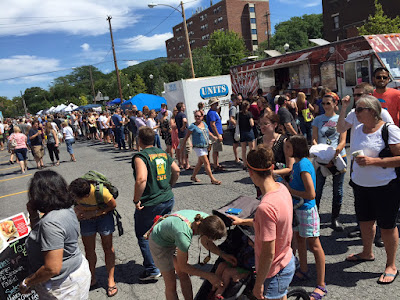 We chose The Taza Truck because VM wanted falafel. I really wanted to try their Egyptian cuisine, but was hesitant because they're not normally a vegan food vendor. 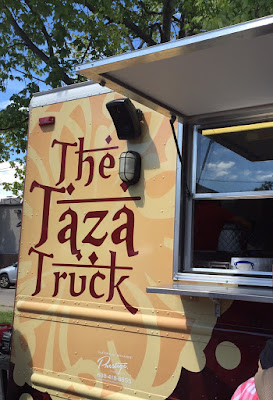 I was still keeping my options open when I spied the kushari on their menu: seasoned lentils, rice, and pasta (!) topped with garbanzos and caramelized onions in a warm, tangy red sauce. The last thing I felt like eating was something warm, but something (pasta) about this dish sounded so appealing that I couldn't resist. 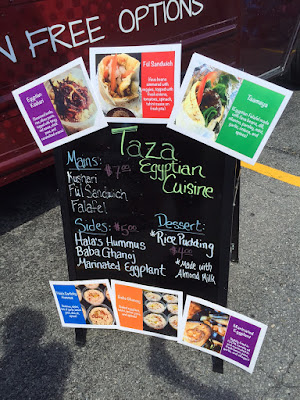 I apologize for the terrible photo; it doesn't in the least do justice to this phenomenal dish. But, here it is: flanked by a falafel sammie belonging to VM on one side and a ful sammie belonging to a friend on the other- neither of which I bothered to photograph unwrapped because it really was all about the kushari. It was so spectacular that I went back to the truck to thank the staff and they could not have been kinder to me and my appreciative tummy. 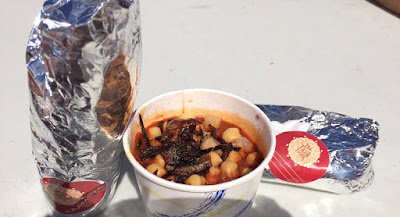 We took another swing around the fest and I got this awesomely snarky Lois Eastlund tee from Grape Cat (not this one), a Vegan Shop-Up regular like me. Maybe 89 needs one with a similar message about vegan dogs? Perhaps Compassion Co. is interested in a collaboration... 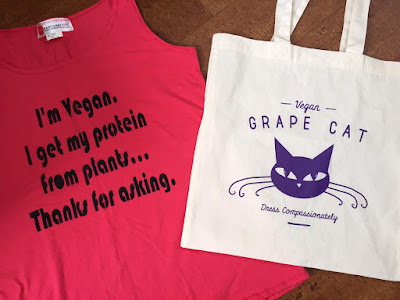 Finally, we couldn't resist checking out the always-impressive and impeccable Vegan Treats tent. This year an orderly line seemed to form organically, while in years past customers just squeezed in wherever they could find an opening. It always amazes me that despite the heat and the crowds the staff is always cheery and helpful; the desserts are each flawless. 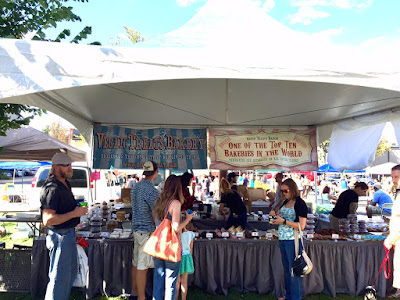 Because I intended to swing by the shop again on our way home I didn't expect to buy anything at the tent, but I couldn't resist these totally adorable ice cream shortbread cookies that VT has been outdoing themselves with of late...and a fruit marscapone tart that was eaten too quickly to be photographed. 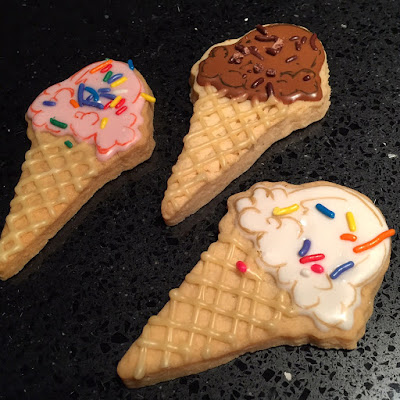 As it turned out, the line at the shop itself was down the block when we returned, so we decided to forgo what would have essentially been a third visit in a single day.

On the way home we took a very happy detour to pass my favorite house in Bethlehem that just happens to be up for sale (in case anyone is looking to get me a present). 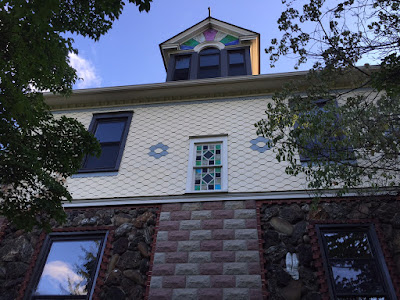 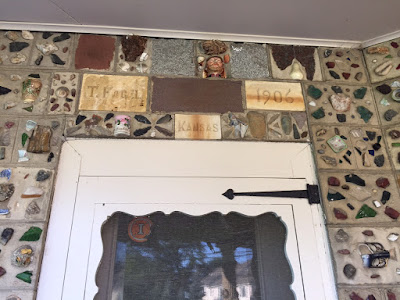 It was another terrific Bethlehem Vegfest! Happily, I ran in to quite a few people I've met over the years at the fest; so nice to see you guys! I will be glad to do it all again next year- perhaps with slightly less drama. 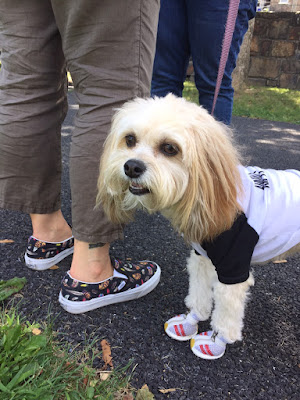 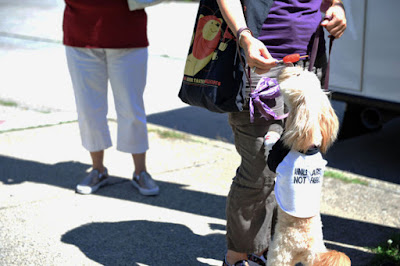