I am a huge fan of Ethiopian food, as is a friend.  However, it is she who deserves the credit for always scoping out the (relatively nearby) vegan-friendly spots!  On this day she'd found Lalibela Ethiopian Restaurant in South Orange, NJ.


Although their motto is "...love veg? love Lalibela," it is not a vegan restaurant.  However, they have an impressive amount of veg options, all of which are vegan. 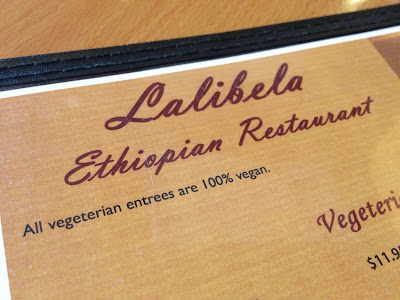 There are a number of veg appetizer options as well, and we were told that they were vegan also.  I chose the Azifa: fresh boiled green lentils mixed in red onions, green pepper and special lalibela dressing [served cold].  Azifa is a favorite of mine, but I do find that when it is served with the lentils still whole (not mashed) it's much more difficult to grab onto them sans utensil.  I'm not proud, though; I'll chase those suckers around my plate until I can catch them with the injera.  With a great crunch (but not too much heat) from the peppers and onions, this was delicious; I swear it consisted of a half a pound of lentils. 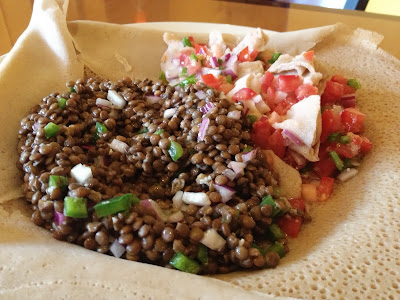 This is the Yetimatim Fitfit: pieces of injera mixed in with chopped tomatoes, red onions, green pepper, and Lalibela's special dressing.  Again the jalapenos weren't spicy, but the tomatoes were ideally ripened and the dish was really refreshing.  It was clear it had just been made, as the injera was not mushy. I used to think I hated fitfit, but I was mistaken.  I just hate mushy fitfit. 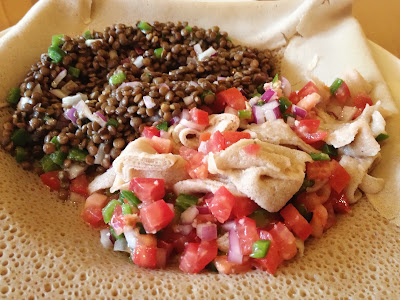 As it turned out, the waiter noticed that my friend had actually ordered the Yaterkik Fitfit: seasoned split yellow peas mixed in with green peppers, red onion and injera.  So, he generously brought that out shortly thereafter.  Same ingredients, but instead of the special dressing they were tossed with kik alicha.  This was also good, albeit a bit heavier than the other two appetizers.  It was like Ethiopian comfort food (is that an oxymoron; isn't it all comfort food?); extremely filling. 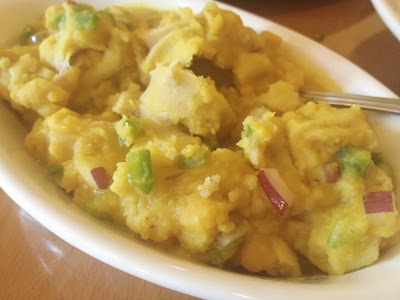 Your eyes do not deceive you; the appetizer portions are HUGE.  So, it is imperative that I point out that we had placed our dinner order prior to having received the appetizers you see above.  I might have shown a modicum of restraint had I known (might have, but probably not).

As in most Ethiopian restaurants, your dish consists of a choice of three entrees: served as a main and two sides.  Lalibela also offers Beyanitu (veggie combo), which is your choice of six: intended to serve two people.  I'm sure you will not be surprised to hear that, when dining in Ethiopian restaurants, I always order the veggie combo for myself.  That's right; this day was no exception.  In my defense, my friend had intended to do the same, but was scared off by the waiter who, to his credit, honestly warned us that the portions were formidable.  In any event, Iorderedthecombofortwoforone and my friend ordered like a normal person.

Unexpectedly, it was all served on the same platter!  Yes, this is typical of Ethiopian culture, but most restaurants I frequent know my germphobe deal.  As it turns out, Lalibela is not psychic.  Thankfully, we were able to share, as we had the appetizers, with the utmost attention paid to prevent the unintentional (but definitely happening) spit-swapping that we saw occurring at other tables. 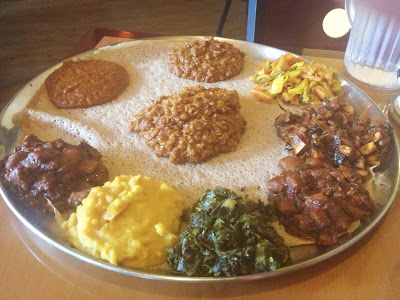 An extremely patient person cuts and rolls all of the injera before it reaches the table. 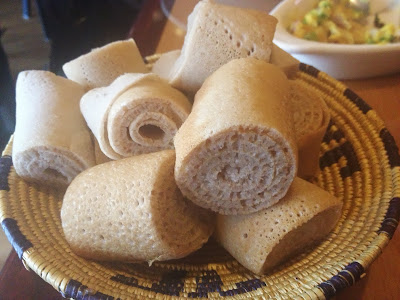 In no particular order, our collective choices:


Misir Wat: split red lentils slowly cooked with onion, garlic, and a blend of hot Ethiopian herbs.  You can't go wrong with this dish; it's almost always the spiciest thing on the plate. 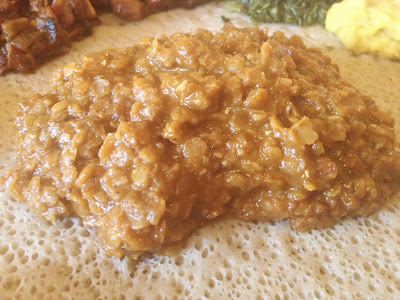 Tickel Gomen: delicious curried vegetable stew made with cabbage, potatoes, green pepper and onion.  This is one of my favorite dishes, but I felt it hadn't stewed long enough; the cabbage was still crisp and not very flavorful. 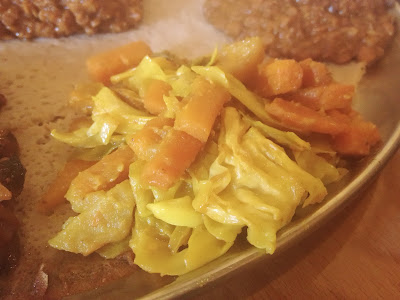 Ingudai Tibs: organic portabello mushrooms sauteed in red onions, garlic, and tomatoes, with various Ethiopian spices and herbs.  The onions were outstanding, but I thought the mushrooms were a little chewy. 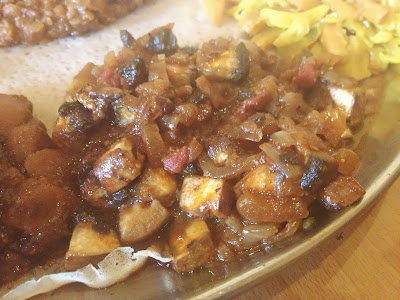 Shimbra Asa: chick pea flour molded dumplings sauteed in a red onion and berbere stew.  We first discovered this dish at Mesob and it's so interesting that I find myself ordering it more often than not. 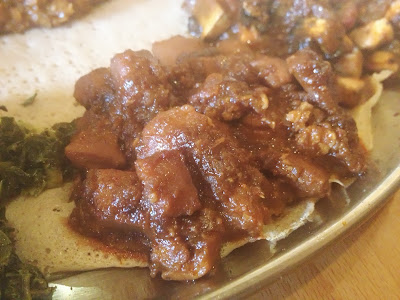 Aterkik Alicha: split yellow peas gently and slowly cooked with red onion, garlic, and various Ethiopian spices.  Another favorite of mine, but this version was a bit dry.  Perhaps only because I'd already eaten so much of it in our appetizers? 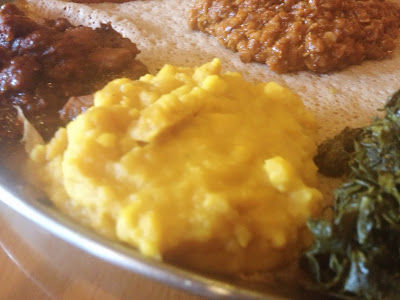 Gomen: chopped fresh collard greens simmered in olive oil, garlic, and herbs.  As greens lovers, gomen is a staple order.  There was something off about this dish that we couldn't pinpoint exactly (brininess?), but we both steered clear of it: we even skipped taking it home with our leftovers.  I'll give them the benefit of the doubt, though; it must have just been a bad batch of collards. 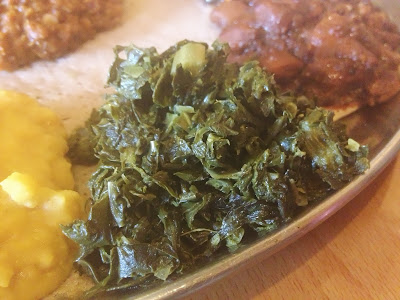 Shiro: chick peas are milled together with a perfect blend of mild herbs and onion, slowly-cooked into creamy dip.  Always a tasty crowd-pleaser. 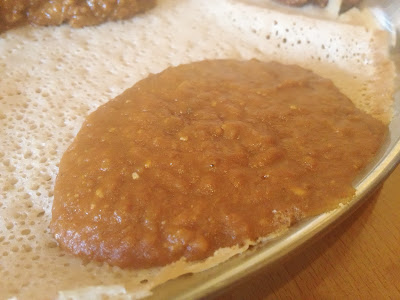 Although we made a sizable dent in the platter (mostly me), there was plenty left for takeout.

We didn't actually have dessert, but that didn't make this "Vegan Dessert (cake)" label any less funny.  I'm not sure if the desserts (there were also cookies) are baked in house, but we were too stuffed to even talk about them.  Full disclosure: we'd been at Pink Frosting earlier that same day. 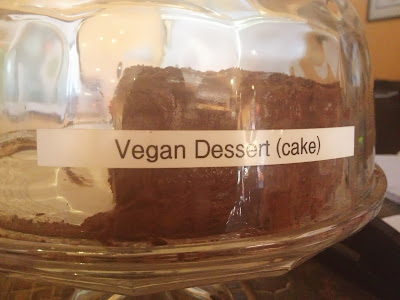 We did enjoy some Ethiopian tea, however, which was served in these cute punch cups. 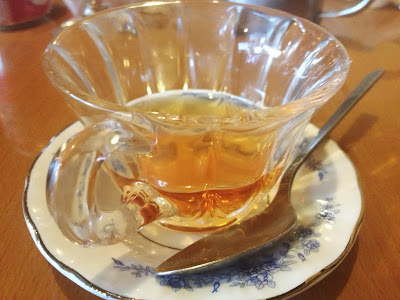 Lalibela is relatively small, casual and bustling.  If there's a short wait, it's worth it.  My only complaint was that it seemed extremely difficult to procure a napkin, which was especially peculiar when you consider how desperately it's needed when you're eating with your hands. 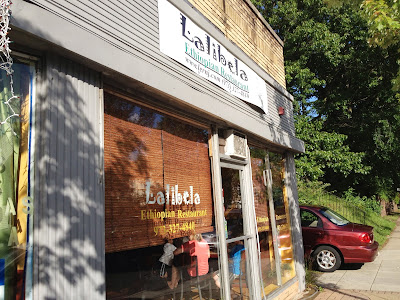 Note: we went on the weekend and easily found free street parking.
Posted by Abby Bean at 6:32 AM