The all vegan, organic food truck, The Cinnamon Snail, finally made it's debut on a blustery, windy day in Hoboken, NJ this past weekend!  As a longtime fan of Adam Sobel, the chef at it's helm, I was proud to greet the newest addition to the Northeast vegan landscape.  Oh yeah, I also went for the food. 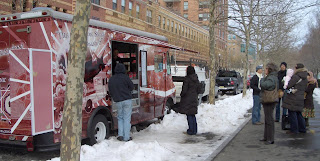 To start, the actual truck is a pimped, gourmet version of a Mr. Softee-mobile.  The graphics are awesome, the awning adorable, and the bakery case (!) divine.  The words vegan and organic are artfully incorporated into the design, yet prominently and proudly displayed from every angle.  From a distance, the parked vehicle is intriguing and beckoning to passerby.

Upon approach, my companion and I were each handed a complimentary, grand opening, apple cider donut.  I've never had such a thing before, and I was pleasantly surprised to find that the fresh, crispy creation tasted neither of apple or vinegar, but rather cinnamon sugar!  Once we were done genuflecting over their divinity, we took the opportunity to peruse all of the other incredible offerings in the large dessert case, seamlessly incorporated into the truck underneath the main window.  In addition to the donuts, there were namesake cinnamon rolls, cupcakes, tarts, mini-cheesecakes, small bundts, and full-sized cakes.  It was difficult to put the goodies temporarily at bay, but eventually we forced our attention to the surprisingly lengthy and varied food menu: boasting melanges of ingredients that were definitely not your typical "truck" fare.

Unfortunately, we arrived too late for breakfast (served 9:00am - 11:00am), or else I would have certainly gone for the blue corn cakes with maple syrup.  Instead, my companion and I pored over the more appropriately-timed salad, entree, and raw options-- finally deciding on two sandwiches to share. 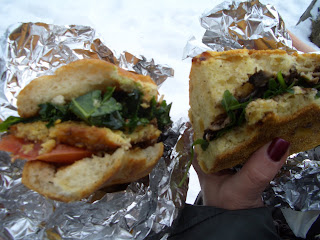 I went with the maple mustard glazed tempeh sandwich, which was a giant sandwich served on a soft, toasted baguette overflowing with extremely moist and tender tempeh.  Festooned with tomato, carmelized onions, and the most deliciously prepared kale I've ever tasted (I normally find kale much too bitter for my taste), it was a great and hearty choice for this unabashed, yet picky, tempeh-lover.  My companion chose the smokey portabello carpaccio sandwich, which was served on incredible semolina fennel bread with golden raisins.  Bearing no resemblance whatsoever to your run-of-the-mill, requisite "vegetarian portabello sandwich option", The Cinnamon Snail's version was served with kalamata olive tapenade, arugula, and capers.  The delicious bread, thinly sliced & delicately prepared mushrooms, and accoutrements all worked together as an impressive, fresh, and creative twist on a what is typically a thoughtless standard.  Bravo!

And then we found ourselves back to the topic of dessert.  We jointly decided upon a few things to take home and bid The Cinnamon Snail good luck and great success.  Then we drove home and instantly devoured our take-home booty.  Ok, we may have snuck one snack during the ride: an unpictured chocolate chip cookie.  The sole disappointment of the take, it was unexpectedly brittle and tasteless.  Considering the continuously overwhelming evidence of Adam's culinary genius, I'm willing to accept the misstep as a token of his modesty and simply skip it on future visits. 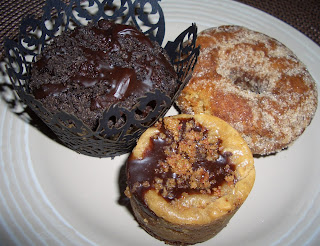 In stark contrast was the mini chocolate peanut butter cheesecake, which was EXCELLENT.  As a huge fan of peanut butter, I am often disappointed by subtly flavored PB desserts.  This cheesecake fulfilled my high expectations of sufficient peanut-butteryness with a dark chocolate accent of non-overpowering proportion.  I suspect Adam may have even utilized my favored crunchy peanut butter variety, because there were satisfying crispy bits within each decadent bite.  The chocolatey Mississippi mud cupcake was a chocolate cupcake topped with chocolate crumbs and fudge, then drizzled with chocolate.  Aptly named, it was definitely a cross between a chocolate cupcake and Mississippi mud pie.  And, finally, you don't really need me to confirm that the second apple cider donut was just as scrumptious as the first. 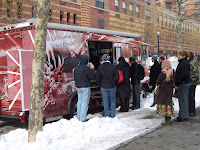 The Cinnamon Snail is hoping to branch out to Brooklyn, but until then you can visit in Hoboken on weekdays from 9:00am - 3:00pm.  Keep up with their exact location and ever-evolving menu (showcasing the freshest available ingredients) via Twitter, on the web, and on Facebook.

It's my pleasure to support a good-hearted, vegan owned and operated business whose offerings are well-planned, artful preparations of sincerely good and nourishing food.  Keep it up, Cinnamon Snail!

A couple of tips: