Can you believe this was the 7th year of the Bethlehem Vegfest? 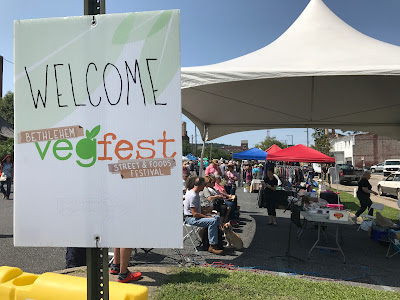 VM and I have attended every year, but you know what we just realized? 89 wasn't even born yet, let alone my beloved, when we went to the inaugural event. Can't imagine that we were wandering around sans muppet. In any event, we're old pros at this point. 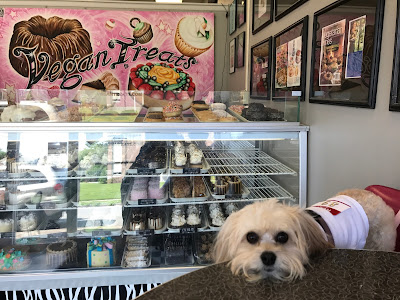 Of course as soon as we got there, everyone was fawning all over 89. Naturally, she had to show off by posing with the goodies. If you've not yet been to their Bethlehem shoppe, you must go. Everything is so gorgeous; it's no wonder non-vegans drool over these vegan creations. 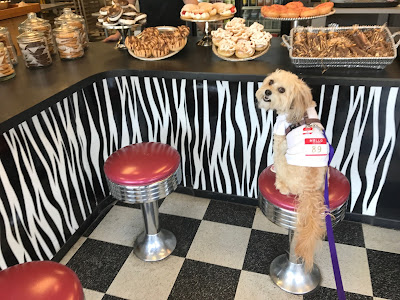 She got a little too comfortable. That's a lot of a long body to fit laying down on a stool! 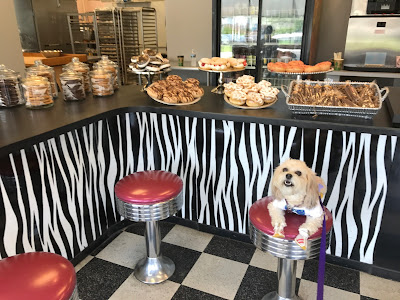 VM and I took a seat with a platter of donuts that we duplicated for take home. The flavors: raspberry lemonade, turtle, bavarian cream, strawberry shortcake were all divine, per usual. Love, love, LOVE. 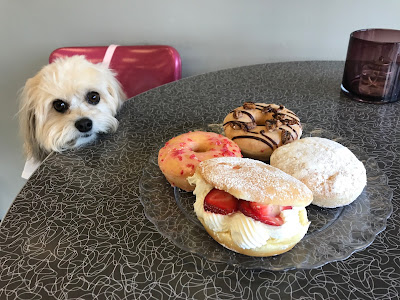 They were originally slated to have speculoos soft serve ice cream, but for some reason had hazelnut and chocolate swirled into nutella instead. Can't be mad at that!! VM and 89 both loved the hazelnut. Amateurs! Swirl is where it's at. 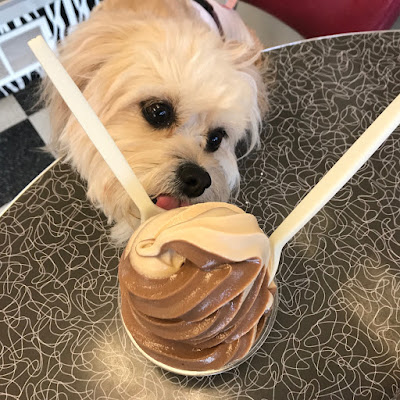 Loved this sign they had at the entrance. We must always stand up for what's right- even when it's uncomfortable or inconvenient. Especially then, in fact. 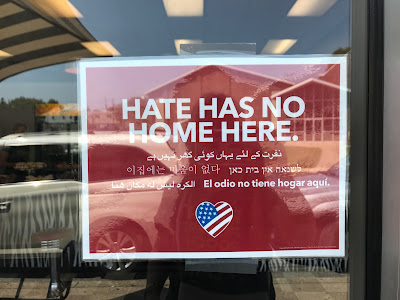 And then we were off to Vegfest. We entered by the speaker tent. If you zoom in, you'll see a pooch in the front row. 89 barks when people clap, so we try to be careful when we choose to listen in.

The speaker seemed to be doing a food demo and was cooking jackfruit; it was not a great smell, but obviously couldn't be helped. Unfortunately, what made it worse was that it was mingling with the moth ball odor that was coming from a clothing vendor a few booths down. That seemed avoidable- blech.

So, we hightailed it past and VM got a crush sangria from Franklin Hills vineyard, which I neglected to photograph because I was too busy with 89 meeting all the dogs.

Overall, we've given up on trying to find specific vendors; instead, we just walk the event from beginning to end so we don't miss anything. 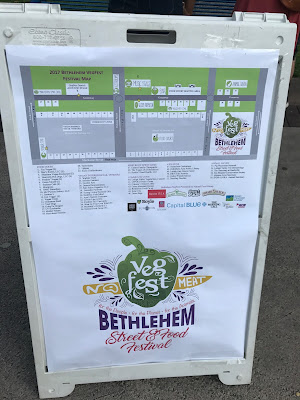 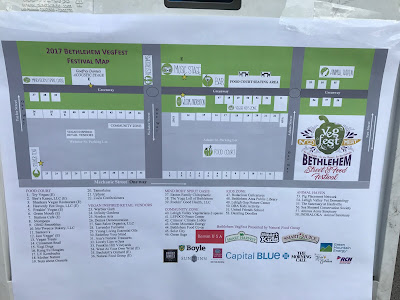 We were happy to see a couple of new (to us and the fest) t-shirt vendors right away. We made a beeline to Redefine Your Mind because we loved the colors in their designs and their super soft, organic shirts. Also had such a nice time chatting with the people at the booth! 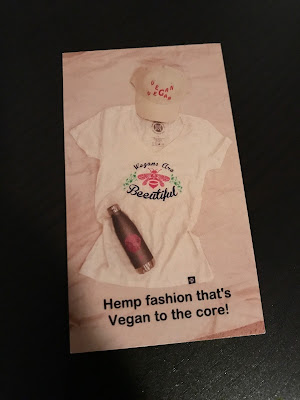 Then we got some produce from local Bechdolt's Orchard. It's funny how vegans are always bellyaching that vegfests don't showcase enough whole foods and then there's no line when they do...

Once again, Vegan Treats had an amazing tent: filled with cakes, cookies, donuts, cannolis, brownies, candy bars, and t-shirts. They even had adorable cat-adorned paper bags to make it easier for people to carry their haul around the rest of the fest, which was really cool. As someone who always has a tote bag with me, I can tell you with no uncertainty that my VT haul is consistently much too abundant for any normal tote bag. Per usual, the staff handled the unrelenting masses like pros. The line was constant, but moved steadily (I wasn't on it!). 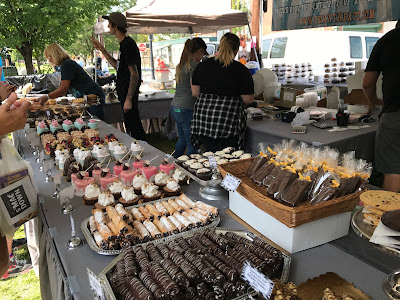 We stopped by the Tamerlaine Farm Animal Sanctuary booth so I could finally get one of their punny (also roomy & sturdy) totes. Big enough for a dog named 89, likely too puny for an enormous haul of VT. 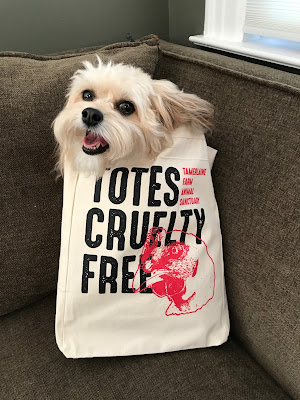 Then 89 and I sat for a caricature. VM made her this super rad shirt that says, quite clearly, "HELLO my name is 89." As you can see, her tag also says the same. So, can someone tell me why this was so confusing? Can't tell you how many people asked us:
We really thought this shirt would be helpful, not make things more complicated. Get it together, vegans! 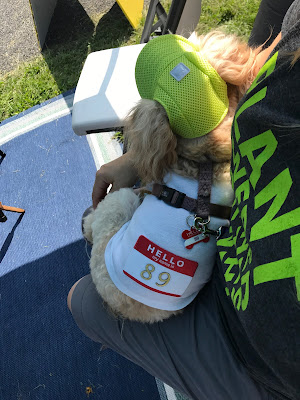 Here's 89's section of the caricature. You might notice that, while surely well-intentioned, it's not altogether flattering. This is why I'm not showing you the whole thing. 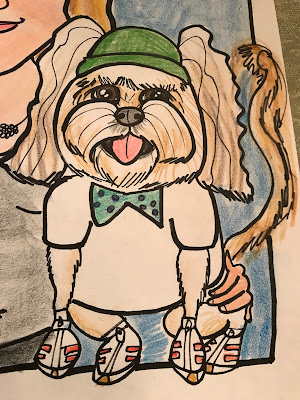 By then we'd worked up an appetite and it was time to hit the food "court." We sorely missed the Taza Truck, but it was nice to see so many new to us vendors. 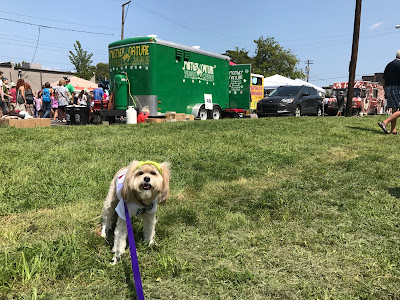 That being said, we couldn't help ourselves from going to our favorites. Sue us; we're creatures of delicious habit.

We started off with these amazeballs bajacos (baja tacos) from our buds at Freakin' Vegan. "Baja-style Cali "fish" taco w crispy cauli, tri-color slaw w cilantro dressing" were served on a soft corn tortilla and they were outstanding. The cilantro didn't bother me (shocking) and I especially loved the fresh, chopped jalapeno. 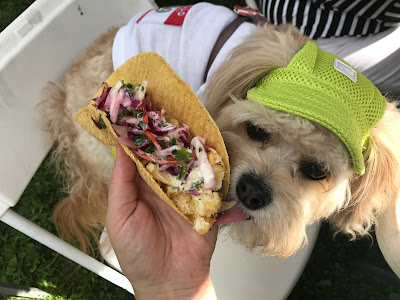 I owed 89 more than a bite of my tacos since the Freakin Vegan crew graciously offered her some mac as soon as we'd arrived at the fest and I'd declined WITHOUT CONSULTING HER because it wasn't lunchtime yet. By the time we were ready to eat they were sold out and 89 was MAAAAAAD. Bites of cauliflower and purple cabbage helped to assuage her fury. 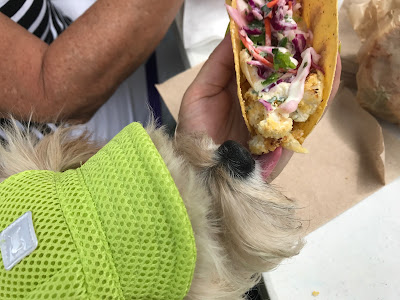 After that it was Snail time. I scarfed down my maple mustard tempeh sammie (with marinated kale, onion, tomato and roasted garlic aioli on grilled spelt bread) without getting a pic, but VM leisurely enjoyed her French lentil burger (with artichokes, carmelized onions, coconut bacon, marinated kale, and roasted garlic aioli on a grilled pretzel bun) after giving 89 a sniff (and some lentils). Later in the day, Ms. Snail asked VM what her favorite thing to eat at the event was. Guess what she said? Not pandering, just TRUTH. 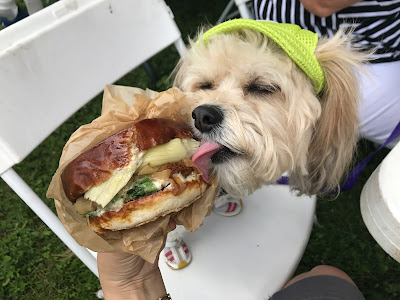 After that we visited with friends and took one final spin around the event, where we got our annual Mompops before heading home. Rumor has it they may bring some adult varieties next year and we're already looking forward to that. 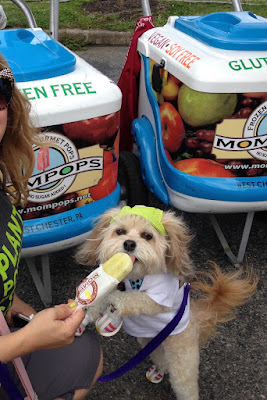 We are big fans of this event for a lot of reasons, none of which are new; I've stated it annually. Love that it's outside and pet-friendly. Love that it's free admission so that it draws a non-veg crowd. Love that they include sanctuaries and non-profits. Wish, however, that they'd expand their vegan take-home food and item offerings, as there are SO MANY!

For one, can V-dog please table? I was wearing this shirt and I can't tell you how many perplexed (and misinformed but adamant) people I encountered on the subject of vegan dogs. I'm sure you vegans out there won't be surprised to learn that just like every non-vegan becomes a nutritional expert when they find out you're vegan, so too do they become a canine nutritional expert when they find out your dog is vegan! Read up, peeps; it's 2017. 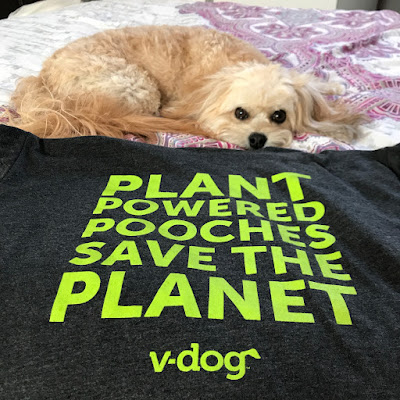 We've heard that the organizers of this event may not be taking full advantage of the area vegan community and I would like to implore them to tap in to actual local vegans in the know. Downtown Bethlehem Association, please reach out to them or put out a call! There are so many knowledgeable, talented people who would love to work towards making this event bigger and better in so many ways; use them as a resource to make a great event even better.
Posted by Abby Bean at 8:07 PM