Vegan 89: Eating V-Dog and Vegetables Up a Storm

You might recall that 89 was eating unmentionable kibble when I adopted her and I immediately responsibly transitioned her to the most readily available vegan kibble.  When I googled the company in an effort to procure nutritional information to present to the vet, I was disappointed to find that there had been a voluntary recall due to possible salmonella contamination.  Thankfully, the bag of food in my pantry (and those in my vegan friends' dogs' pantries) was not part of the recall, but the thought made me extremely uncomfortable.  My diner might have a vegan burger, but if they're going to cook it on the same surface that they grill everything else, do I still want it?  So, while I'm thrilled that a mainstream company offers a vegan option, it's a little too disconcerting for me to think that it could be mixed up with less desirable food prepared in the same factory. 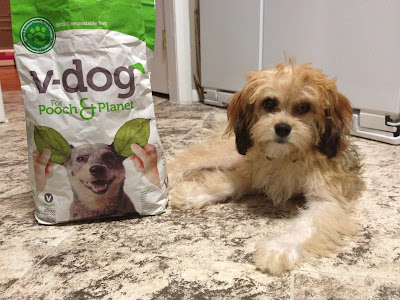 As far as I know, you can only order it online, which makes it infinitesimally less convenient.  Or more convenient when you consider that you can have it appear at your house with less effort than it takes to actually go to the store. 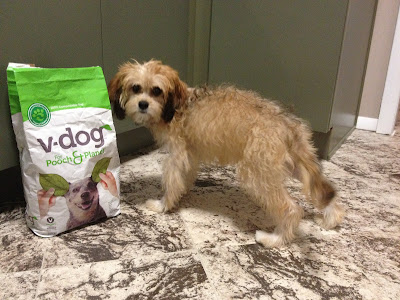 Another food transition began, but 89 didn't seem to mind since I also started giving her a little pumpkin a few days a week. 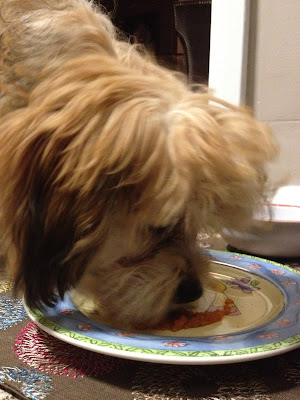 As it turned out, the vet wasn't too interested in the ingredients and nutritional breakdown of either vegan kibble.  All he said was, "I'm not vegan so I don't know anything about it, but dogs are carnivores by design" and then tried to give her an obviously non-vegan treat (presumably out of habit rather than insult).  I easily intercepted the treat and discounted his disinterest with the knowledge that there are plenty of vegan dog resources (including other vets) for me to consult.  However, I did find it disappointing that he would be so discouraging- especially when he obviously didn't have any real concern for her ability to thrive on a well-planned vegan diet, as I'm sure that there are steps a veterinarian can take if he or she truly believes an animal is at risk of any kind of abuse- including malnutrition.  But a newer or trepidatious vegan dog guardian might not have fared so well in the face of his authoritative dismissal; when the well-being of an animal in your care is at stake, just about anything can make you panic.  (For instance, I have a somewhat irrational fear of dogs choking, so I offer only raw vegetables- like carrots, that have been cut into tiny pieces.)

This reminded me of a time I was at a cooking class with the normally impressive Christina Pirello.  After recounting how she'd managed to turn disease around through a healthy, whole, unprocessed vegan diet and lifestyle, a young girl in the class explained that her mother- who was sitting beside her, was worried about her health and well-being now that she'd begun following a vegan diet.  The response, to paraphrase, was that if it would make her mother feel better, she should eat an egg every once in a while.  Needless to say, coming from someone with a Master's Degree in Nutrition and almost 30 years of veganism under her belt, you'd think she could have offered a more educated and compassionate response.  So too this veterinarian.
So here's a thought that's generally a good rule of thumb in all aspects of your life.  If someone who is supposed to help you isn't, look until you find someone that will.  And, if you're interested in something, find out everything you can about it as well.  Ask your friends, do some research, and read, read, read.  With this in mind I have begun to trust myself to be better prepared to discuss with professionals rather than rely on their often biased or baseless, initial responses, and to arrive at my own thoughtful and educated conclusions on many subjects.  Sometimes people- even those who are in a position to do so- do not help you.
And sometimes they do.  I contacted famous vegan vet, Dr. Armaiti May, for guidance in finding a vegan-friendly vet in my area.  While she wasn't able to suggest anyone (hey vegans, we're not well-represented in the vet category; start going to vet school!), she did send me a ton of useful information for both myself, and my (presumably interested) vet about how and why vegans choose to feed their pets in the same ethical manner.
Check out Vegan Break's interview with Dr. Armaiti May. And, coincidentally, Vegan Break's interview with V-dog's founder.  By feeding your pet a vegan diet, you are not imposing your ethics on an animal, you are caring for him or her just as you do yourself and would all of your loved ones if they'd just listen! if given the chance.  If you're already vegan, you know that besides cruelty, there are many atrocious ingredients to be found in non-vegan human food; have you ever looked into what's in non-vegan dog food?  It's not pretty, and it's certainly not healthy.  As always, please remember that this blog is not intended to be an instruction manual for your (or your pet's) life, just a window into mine with suggestions for a more compassionate existence. For a humorous overview of vegan dogs, check out Laura Beck's article from the Bark.  For more comprehensive nutritional information, I recommend Vegan Heartland's post on her own vegan dog's diet.
Always consult with a veterinarian before changing your pet's diet.  Good luck to you and yours.
Posted by Abby Bean at 4:50 AM