The other day I was sitting at home, thinking about the current state of affairs with the whipped cream drought, when I receive a text from OD. I see whipped cream, I see vegan, and I see him telling me the price as if now is any time for comparison shopping. WHO CARES? JUST BUY IT! 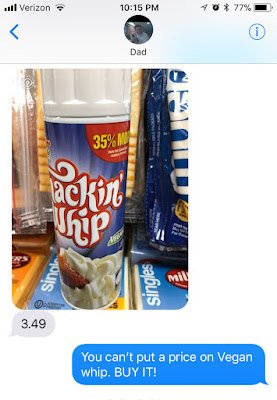 He did, of course, and here it is: Smackin' Whip. I'd never seen it before; he said it was just hanging out amongst the non-vegan whipped cream like it was NBD. 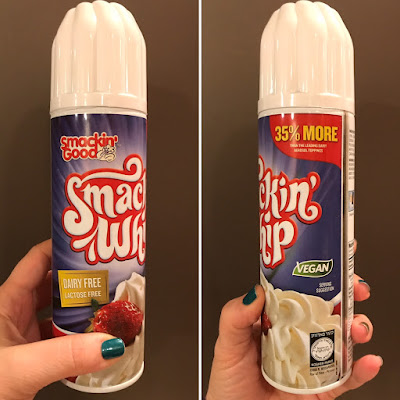 A little internet sleuthing brought me to the brand, Smackin' Good. It seems that they make whip/light whip, pancakes/waffles, and potato knishes; there was very little additional info. All signs point to them being a Kosher company that embraces their accidentally vegan products- kind of like Klein's ice cream. 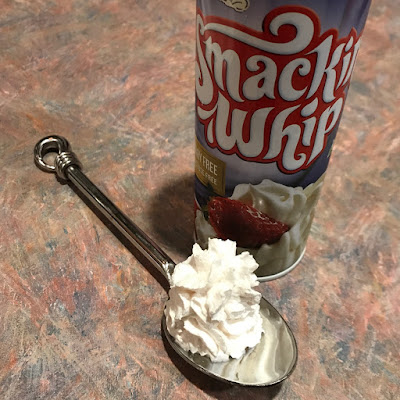 Taste test time:
Unlike Soyatoo!, Smackin' Whip comes right out of the can...right outta the fridge. The whip has the look and texture of non-vegan whipped cream; you can control it into florets, but it was also build-able for a more impressive presentation. Taste-wise, it had a subtle sweetness: no discernible vanilla, no coconut (like Trader Joe's version). 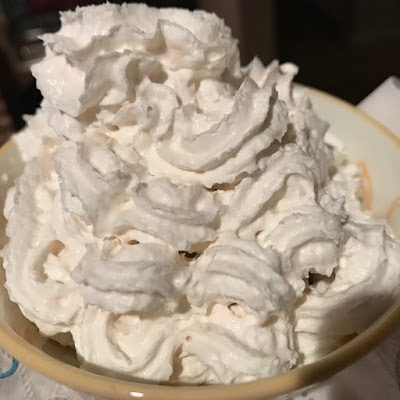 None of this prevented me from filling my bowl with what would generally be considered a disproportionate amount (there's one scoop of Nada Moo mint chip under there). I was happy to have it, but I'm pretty sure that I'd still choose Trader Joe's in a blind taste test.
Posted by Abby Bean at 9:40 AM