Beyond Burger- Quick Review (by a vegan and an omnivore)

It took me a bit of time to procure the Beyond Burger for two reasons. 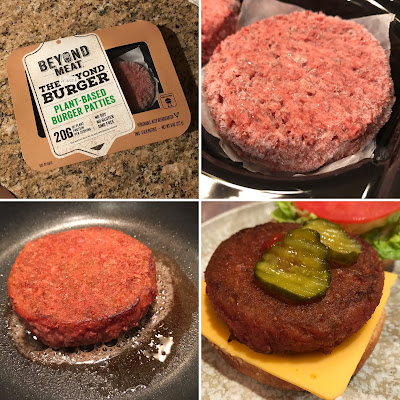 Ultimately, the Beyond Burger was found in the refrigerated veg section of the Whole Foods I was in: near Tofurky, Vegenaise, and the like. It looked as though it had been shipped frozen and, from what I can discern from the package, you can re-freeze it as long as it's not open (the package contains two burgers in a single, sealed compartment). Overall, pretty darn realistic-looking. 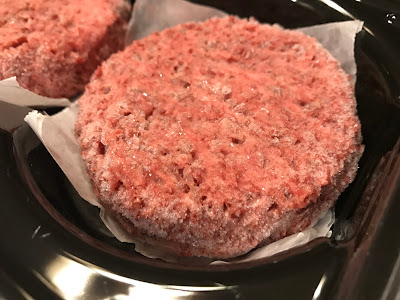 A lot of people reported a meat smell while cooking, but the smell I detected was relatively faint and kind of indescribable- albeit familiar. Perhaps beets? Certainly not unpleasant, just unusual.

Luckily, a friend had already cooked his Beyond Burger in a George Foreman grill only to watch all the juice/flavor drip out, so I was forewarned to use a frying pan (this was a winter-winter day as opposed to one of our recent spring-winter days, so the grill wasn't an option). Note: this is a small pan; the patty is a decent size, but not mammoth. 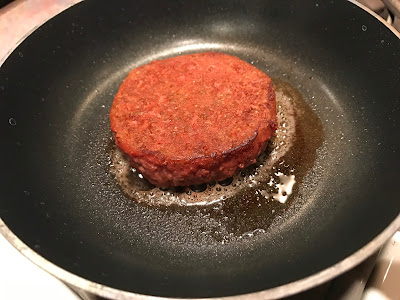 I don't really remember what a cooked cow burger looks like, but this looked pretty enticing. 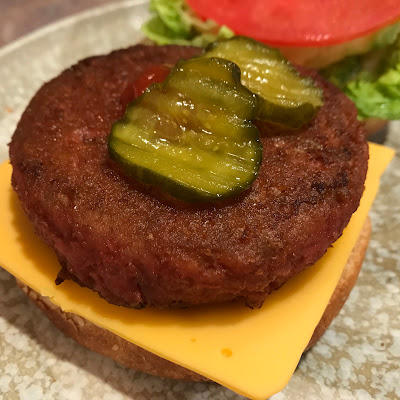 And, even more so once dressed (sriracha ketchup, lettuce, FYH american cheese, pickles, no onions, on a sesame seed bun). 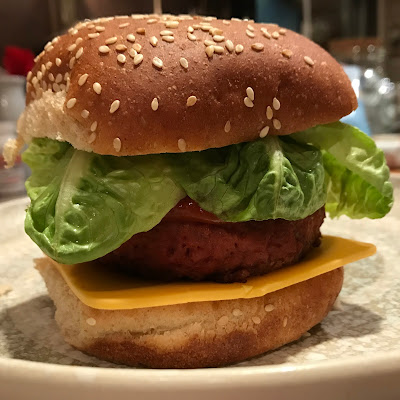 This isn't a great interior shot, but I hope you can see the texture of the burger, which was the most off-putting part for me. The burger itself had a very neutral taste, but the "mouthfeel" was too realistic for me: kind of granular-ly lumpy like chopped meat burgers. 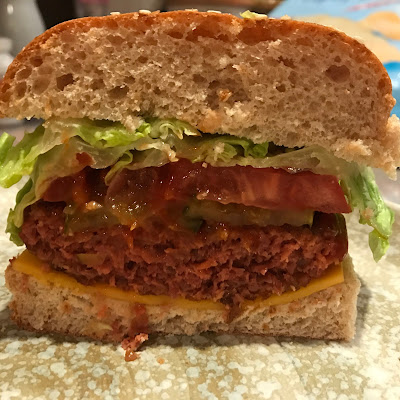 I gave OD the other half of my burger to try- expecting him to take one bite and hand it back. Instead, he gobbled it up. I told him the one taste was enough for me and that I'd leave the other one in the fridge for him to have the next day. HE DID NOT PROTEST.

Because it was so obvious that he actually liked it, VM and I kept smirking. Because he can't stand smirking, he insisted that, although it was the best "veggie burger" he'd ever tried (highest compliment in all the land), he probably liked it mainly because of the toppings (big vegan cheese fan, OD?). So, I'd say this was a success.

This is no ordinary veggie burger, my friends. VM and I will stick to black bean-type burgers, but this could really be a game-changer for those looking to replicate meat.