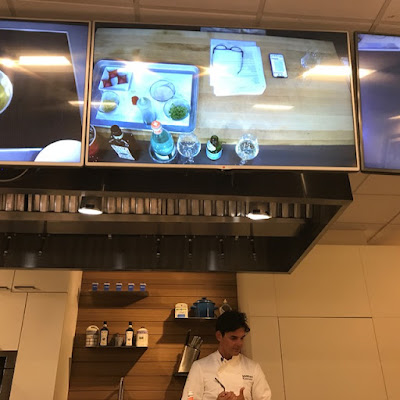 I didn't know much about MK going in, but I don't know too much more now. What I thought I knew was that he owned Double Zero and Bar Verde, but it seems- if I understood correctly, his partner in Double Zero is a partner in Bar Verde, so they're only tangentially connected. It also seems as though many of "his" restaurants around the world are licensing deals. I'm not entirely sure he's still officially affiliated with Plantlab, the culinary school he founded, for which the eponymous cookbook was being sold at the event. Basically it seems like his name/name recognition is the driving force behind many of what are widely considered/referred to as MK restaurants. I'm not mad; I guess I just don't understand the restaurant business.

All in all, he seemed relatively affable, but not necessarily invested in the evening; it appeared as though he wasn't certain how the event was supposed to flow, so it did so only barely. The prep/cooking "demonstrations" were treated like an afterthought. If any happened at all, it took place after we'd finished the course and, even then, only consisted of the most basic of actions. His interest was seemingly only piqued when it came time for plating the dishes for the chef's table: brandishing, with the utmost concentration, elongated tweezers he'd pluck from his chef's coat as needed. This was ironic, since the dishes we were served were plated rather lazily and wholly inconsistent in terms of ingredients/proportion.

Most prep (and questions) were deferred to another chef he'd brought with him, Chris Owen, who was introduced as Bar Verde's chef de cuisine. Overall, he seemed much more present and engaged. He was humbly deferential to MK, but seemed significantly more at ease with both the crowd and the subject matter. Spoiler alert (and good news): DeGustibus is having Chris back on his own this March and I highly recommend you get tickets here. Take that for what it's worth as you read on. 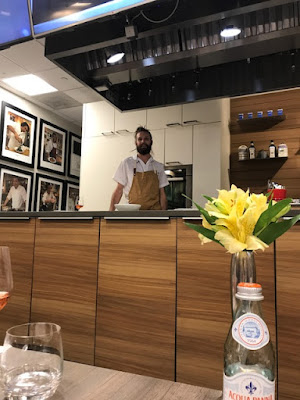 The amuse bouche was beet manti with cumin yogurt and parsley oil. The only prep we were privy to for this dish was to watch the pre-assembled purses steam long after the crowd had eaten them. Tasty filling, but a little lightly proportioned for the thick dough. Would guiltily eat a dozen of these from the bottom, discarding the majority of the pursed dough atop. The meal seemed promising. 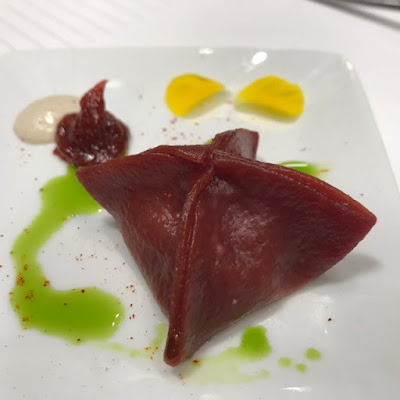 The first course was maitake tempura with tomato jam and who doesn't love a fried mushroom? Unfortunately, this was pretty much just a fried mushroom. The accompanying tomato "jam" was somewhat reminiscent of cocktail sauce; I definitely thought something creamier and definitely tastier would have made more of an impact. Yawn. 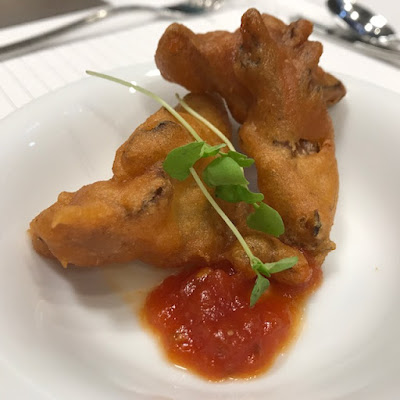 MK mentioned more than once that a little olive oil, salt, and pepper were the best prep tools and this Balkan tomato salad was literally just that. The heirloom tomatoes Chris told us he'd personally acquired from the USQ greenmarket ranged from tasty to mealy and were overall underwhelming. Those in the crowd following along with the recipes were quick to point out that this dish was served sans the listed Brazil nut feta, so a bowl was passed around the crowd after the fact. It seemed also to be missing red bell peppers and green onions, but perhaps that was just my portion. 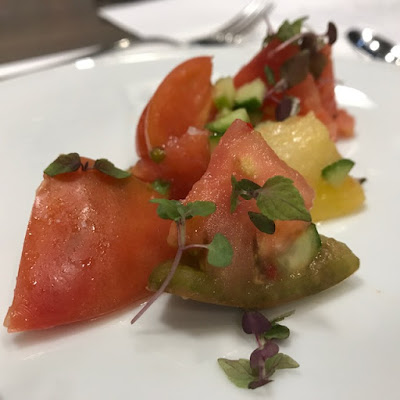 I'm not entirely sure why, but I really expected this double zero flatbread with piquillo romesco and marinated olives to be hot in temperature. It wasn't, nor was it even room temperature. The chill of the ingredients was startling and the olives needed to be diced, or at least halved, in my opinion. The tomato was flavorful against the umami of the olives and redundant tapende, but most of the flavor seemed to come from the olive oil. Again. 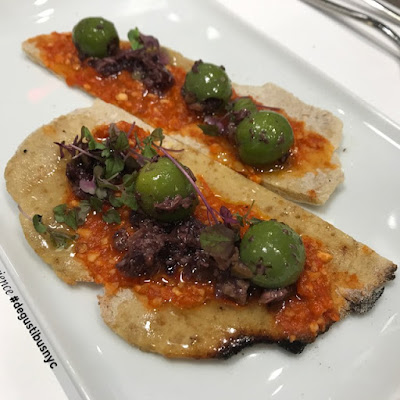 Next up: hearts of palm ceviche with avocado, chili, and almond oil. Never was the inconsistency between servings more evident than between my plate of blah, shown here, full of hearts of palm, and VM's dish of purely avocado. She had no watermelon radish, I had one slice tucked in mine; our third had three. The hot pepper rings were the most flavorful bite of the evening, but I could have done without another course relying so heavily on oil for flavor. 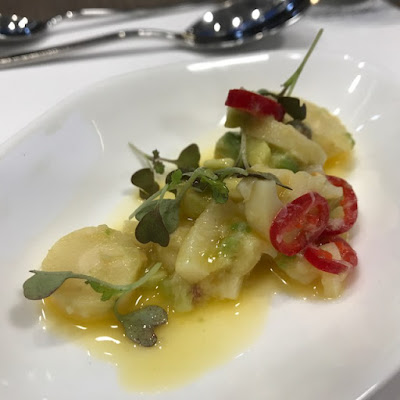 At this point in a previous De Gustibus demo, I was stuffed before being served a generous main course. At the same point this evening, I was still hungry for food and innovation. The chickpea socca with green goddess, field greens, and vegetables provided neither. Again, a little too chilled for my taste on a fall day: the plating was kind of sloppy because the ingredients were all too large for the host socca. Dry and just not flavorful at all, this was another dish that was just the sum of its parts. Incidentally, some of the "parts" were missing again. Judging by the evening's accompanying recipe, this dish alone was missing herbs, sprouts, pomegranate seeds, and possibly cashew yogurt- although it could have just been in too short supply to have made an impact. 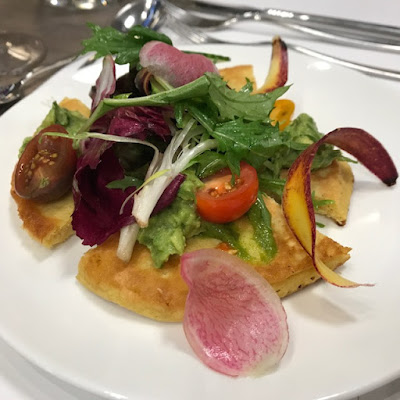 I'd already braced myself for a dessert that was likely not going to be my cup of tea, but nothing could have prepared me for the horror of this triangle of salted almond* cheesecake. Upon first glance, I assumed that the worst thing about it was to be the cranberries, but not so. The cheesecake itself (or was it the unexpected pistachio crust) actually tasted rancid; I remain shocked that it was served. *For the record, this too was missing a component- the salted candied almonds to be precise, but we were advised by Salvatore, the host with the most, that we didn't "need" them. Poor guy; I think he was just trying not to waste any more time, as the awkward "demonstration" was already running very long. 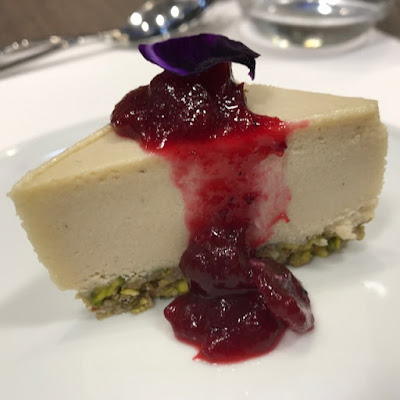 Sigh. There were no revelations here, to be sure: barely more than oil to showcase the flavors of simple, naturally vegan food-- certainly nothing to indicate how far vegan food as come in the last twenty years. Further, the missing ingredients and lack of engagement was disrespectful for the sold out crowd who spent their time and money to learn something from a successful someone who, presumably, would want to share what excites him about veganism in earnest.

Overall, MK seems like a bit of an aloof enigma, which is fine, but then I would have preferred for Chris to have taken the helm of the evening. I couldn't be happier that DeGustibus has discovered the error of their ways and has invited him back to headline, although I think I'm going to skip this one- I still have a bad taste in my mouth from this event's disorganization, half-hearted demos, missing ingredients, and the ultimate dismissal of it all.

On another vegan note, MK shared a few unusual tidbits with us over the course of the event that I've been mulling over ever since. One, that he shot a deer at the age of 10 (and felt compelled to share because...?). Two, that he eats fish once in a while, but hasn't in a long time (Again, WHY? Trying to appeal to the non-vegans in the room? Just a guess). Third, that he doesn't have honey on his menus because vegans don't want it. Vegans. Not himself, but some mysterious other vegans? Is he actually vegan? It was all rather baffling.

In fairness, I really enjoy "MK's" restaurants, but this whole experience has really given me pause as to whether or not the whole business is a cash grab rather than an ethical labor of love. There are many other vegan chefs who haven't achieved an iota of the global success he has and this display didn't give me any clue as to why.

Finally, I want to state that I'm so grateful that De Gustibus showcases vegan chefs (seemingly once/season), but I think it would be helpful if they were to have a vegan primer at these vegan events so that ridiculous, sometimes haughty questions don't hijack the event as they did often this evening. This could take the form of an emailed cheatsheet on what veganism is (no animals/animal byproducts) and isn't (gluten-free, always healthy) in advance of the event, or even an Ask A Vegan booth on site just outside the venue for sincere inquiries pre and post event.

For context, some of the gems I recall from this particular evening:

"What do you recommend as a substitute for 'perfect' non-vegan foods like chicken soup, which is medicinal?"

"Did you know you can buy MCT oil in AMAZON DOT COM which is like coconut oil with all the bad stuff taken out BUT it might give you diarrhea?"

"How vegan does the chocolate have to be?"

Admittedly I was on edge from what I considered to be a wholly sub-par event, but come on. If you're going to attend a vegan event, would it kill you to prepare a little? This question goes out to both the attendees and Matthew Kenney.
Posted by Abby Bean at 11:16 AM