I Have Seen Portland and It Is Good

So, it’s about time this east coaster started discussing her trip to the “Vegan Mecca” that we think of when we think of Portland. I'll just backtrack a minute to note that when I went to San Francisco a few years ago I thought I was going to step off the plane into a crunchy granola hippie land of vegan cookies and tie dye. This was not the case. Sure, I happily got to the well-known: Millennium, Herbivore, and Maggie Mudd (heart) and enjoyed immensely, but I was not prepared to have to work so hard to find other, non-mainstream, vegan happiness. I thought it would find me with blinking neon lights blazing, "Welcome Vegans!" and thusly I missed out on many gems. So, I was heading to Portland, my second visit to the west coast, certain it would be what San Francisco was not: a total and complete VeganLand.

To that end, I prepared for my trip with months of research under my vegan belt; I wasn't going to miss a bite, I mean, a thing. I had daily itineraries mapped out and my only concern was what I was going to do in the pockets of free time between meals and snacks. I stopped shopping for just about everything months in advance because I figured it would be easier to do so in a veritable vegan city where there'd be nary an animal product to be found. I had such high expectations that I began to think of Portland as a city populated predominantly by vegans, and that veganity would be beckoning my attention at every turn, vegan police monitoring every move. I feared that in a different state my supercool sneakers wouldn't be recognized as the faux leather they were and that I would be undeservedly ostracized by the masses. I worried that my vegetarian traveling companion would conspicuously unwrap a non-vegan mint, causing us to be turned away at PDX. Then on the way to the hotel, our first friendly Radio Cab driver asked why we were visiting and I answered, “I'm vegan”. The man turned around in his seat and asked, “WHAT is THAT?” Oy vey; wrong again!

Ultimately, there are certainly vegan options galore in Portland (posts to follow), but also plenty of places where: not so much. Perhaps the options just seem abundant because it’s a smaller and more condensed city than NY? But, it's not totally VeganLand. Don't get me wrong, the vegan mini-mall is entirely worth the price of admission (so too is the vegan corn dog), but, like New York, you still have to know where to look; vegan happiness isn't brimming over everywhere you turn (I'm talking to you, leather accessory booth at the Saturday Market). Overall, I’m still trying to piece together my thoughts on the city; hopefully the posts that follow will do it for me.

I do want to note that every time we told someone in Portland that we were vacationing, they asked us why. Every time. Maybe inquisitiveness is just part of being a Portlander, along with a laissez-faire attitude and the habit of ambiguously answering pointed questions requiring a simple yes or no. Or could it have been an Oregonian attempt at making polite conversation? Perhaps they thought us interlopers on their territory? Or, conversely, think their own city unexotic? If that's the case I should point out that even New York does not have a vegan mini-mall or a shopping mall with an ice rink inside. Sigh. 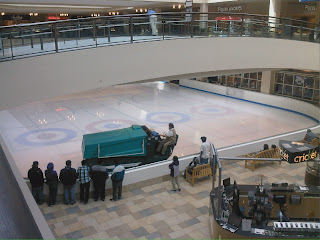