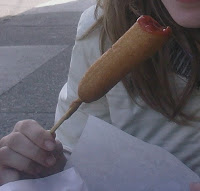 Our delayed arrival in Portland prevented us from partaking in Hungry Tiger Too’s $1 corndog Wednesday (not to mention drag queen bingo at Crush bar). Luckily, the gal we met at Potato Champion on our first night warned us that it would have been a madhouse, and that it was worth the extra $$ to leisurely enjoy a corndog on any other day. That I did.

In my defense, I had already eaten breakfast, but still I admit my foolishness: I only ordered one corn dog. I was so excited that I couldn’t even read the menu (separate for vegans and extensive), just begged the waitress for a vegan corndog! I should say that I have never had a corn dog before: vegan or otherwise. Why didn’t anyone tell me how good they are? Oh my goodness, this thing was delectable. Not only was the outer “shell” crunchy, corny, and delicious, but somehow the preparation of the corndog made the inner dog the most succulent vegan dog I’ve ever had. Condimentally speaking, I chose plain ketchup. The cold, sweet, tomato taste really lent itself to the warm, fried creation and I was a happy camper. Why aren't there vegan corn dog vendors on every corner of every city on every coast, I wonder?
Bonus: While in the vegan mini-mall I thought I spied the infamous Isa Chandra Moskowitz walking by. Then, when I entered HTT there she was in the flesh (as opposed to on the cover of my cookbook looking knowingly at me as if to say, “I couldn’t have made it any easier for you, you cooking reject.”) Alas, I was too embarrassed to say hello because 1.) I was afraid she might quiz me on one of her recipes and 2.) I didn’t think it was fair to say I was a fan of her cookbooks whilst being handed an unhealthy (albeit vegan) corn dog. Anyhoo, “Hi Isa, your recipes are literally the only ones I can follow!”

I can only speak for the corn dog, but Hungry Tiger Too is a DEFINITE must stop for vegans on its merit alone. I can’t say anything about the service or the atmosphere because first I was too excited to notice, and then I was too satiated to care.

Anyone know where else in the country one can find a vegan corn dog? Must. Get. More.
Posted by Abby Bean at 8:45 AM