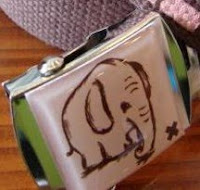 My mom is an elephant collector, so when Herbivore came out with the line of elephant stuff my radar was up. Only problem was that everything with an elephant said, “I’m vegan and I love you”, and my mom is neither a vegan or a poser. Then I found the matching belt, with the buckle boasting the same elephant and no saying. I thought I had scored until I realized the belt was printed with the word herbivore. She’d given up red meat and fish, but chicken was still on the table, so to speak. So, no go.

One day I absentmindedly sent her a picture I had found on the internet of a cute, fuzzy, live baby chick chillin’ in a hamburger bun. THEN I took her to the Woodstock Farm Sanctuary for the first time to meet the ridiculously colorful chickens in person. AND THEN she went vegetarian. Gotta love it. So, I proudly marched myself right into Herbivore and picked up the very last herbivore elephant belt for my deserving herbivore mom. And now? She explains to everyone who asks her where she gets her protein “If elephants can maintain on the protein they get from a vegetarian diet, then so can I.” HA! Take that, carnies (read more about her on SuperVegan).

But, I digress. It was great fun poking around Herbivore and chatting with the friendly gals. They have tons of cool shirts, sweatshirts, etc., and plenty of accessories like bags, wallets, jewelry, etc. Of course they have a bunch of adorable pins and stickers, and also cute cards and artwork. I got a bunch of stuff, including a really cool belt by Yosifa Penina that I must have missed on the website, and a gorgeous wallet by Espe. Funny note, a non-vegan coworker saw my wallet and surreptitiously went online in search of one for herself. The next day she told me she ordered herself one and asked me if I’d ever heard of “Alternative Outfitters”. Um, yeah! So now one less cow is a wallet; thank you, Herbivore.