Way back on Mother's Day I promised this post would be forthcoming.  I can't believe I managed to resist the treats for that long! 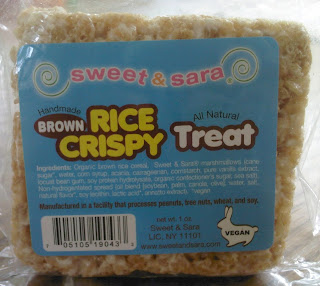 Remember when Sweet and Sara marshmallows were invented (it's hard to remember life before them) and you were all excited because you could finally make vegan rice crispy treats?  And then you made them and you were reminded that it was a huge, sticky mess and you could eat the whole pan-ful within minutes, thus making all of your hard-work impossible to brag about?  Prepare to rejoice, my fellow neurotic, lazy sweets-loving vegan friends. 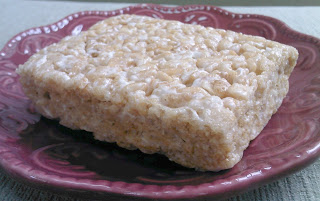 Not only have they given us the delicious marshies, but NOW Sweet and Sara has gone so far as to make the darn crispy treats FOR us!  Besides using healthier brown rice crispies than the regular ones that live in my pantry, they're just generally way better than you could ever make.  Ok, it's true that I technically don't know what you can make, but they're certainly way better than I could make. 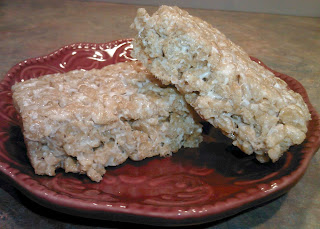 Side note: I would be remiss if I did not mention the conversation that transpired during the enjoyment of the crispy treats.  After agreeing that they were incredible, I said to VM, "I suppose these could be dipped in chocolate too."  In true VM style she responded (without missing a beat), "I don't know why she wouldn't."  Well Sara, there you go; how can you argue with that logic?
Posted by Abby Bean at 10:39 AM

Email ThisBlogThis!Share to TwitterShare to FacebookShare to Pinterest
Labels: Sweet and Sara