The Restaurant So Bad It Shall Not Be Named

I recently spent an incredibly rad veg-end with some incredibly rad peeps.  We had an awesome day that started with Sprig and Vine, continued with a trip to Vegan Treats, and included lots of other non-eating (!?) fun in between.

Unfortunately, the last stop on our tour of the suburbs was an abysmal experience at a vegetarian Indian restaurant- despite it having come highly recommended from an extremely well-respected, vegan source. This was one of those times that seemed to confirm that these experiences seem to disproportionately happen to me than to the rest of the world.  Oh yeah, and to those in the unenviable position of being with me. The decor of the restaurant was unexpected: kind of cafeteria chic...without the chic.  The lighting was totally bizarre; while it inexplicably made for nicely lit photos, in person the reverse blacklight effect made the colors of our clothes appear distorted and gave me an instant headache.  To be fair, that also could have been caused by the unattended children that were playing maniacally with the noisy vertical blinds directly behind my seat.  But the place was packed; we figured all of those people couldn't be wrong.

We were directed toward a table with partially filled plastic pitchers of water and no table settings.  Four menus were thrown at our party of five adults with the barely audible warning, "Descriptions are in the menu", which we took as, "Don't ask any questions."  The menus were odd, to say the least.  Laminated and spiral bound, not all of us had the same version.  To make matters more confusing, some whole pages were covered with a label reading, "coming soon" that was practically worn off with age (we did ask; these things were still unavailable).

When we asked for cups, a stack was tossed onto the edge of our table.  Napkins?  A fistful thrown.  Silverware?  Deposited in a pile.  So it was no surprise that when we asked which items could be made without ghee, the waitress literally ran away.  Granted it was only about a ten foot distance to speak to the man who had seated us, but it was quite off-putting.  We watched them speak to each other with considerable animation, but then he returned to our table stone-faced and ready to take our order as if he knew nothing of our request.  When it was repeated, he indicated that the only ghee-less option was dosa; this was not at all what we had been told by other vegan patrons.  Why would we have traveled to this venerable strip mall for dosa when we can get vegan dosa anywhere?  He was particularly short with the friend seated closest to him and, were we not a full table of (believe it or not) still hungry vegans, I definitely would have left on principle.  But we were hungry for Indian food and there on a glowing recommendation, so we stayed.  We again made our request clear and he too took unceremonious leave of our table.

When a third waitperson finally appeared we had all given up and just ordered dosas all around.  She sweetly asked why and, defeated, we explained that we were vegans who could not eat ghee.  She rattled off a number of other items that supposedly could be made without it, but we amended our orders only slightly- not willing, at this point, to take her at her word.

The food came out practically immediately.  My friend's appetizer (served seconds before her dosa) was tasty, but I have a hard time believing it didn't contain ghee; they were obviously pre-made- which is fine, but one must always assume the pre-made default is ghee.  Additionally, it was extremely spicy when she specifically confirmed that it wouldn't be. 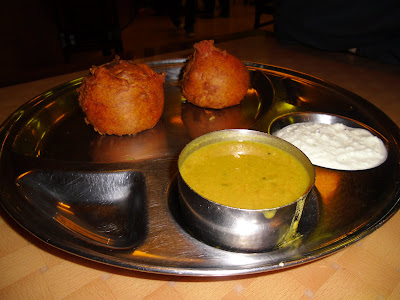 The masala dosas were generic in size, with the absolute least amount of potato filling I've ever encountered (and I've had some crappy dosas).  We surmised that the kitchen had enough filling for one dosa and instead spread it out so that each order contained a forkful worth.  Besides being minimal in quantity, the "filling" was unsettlingly white, with no discernible Indian spice whatsoever. 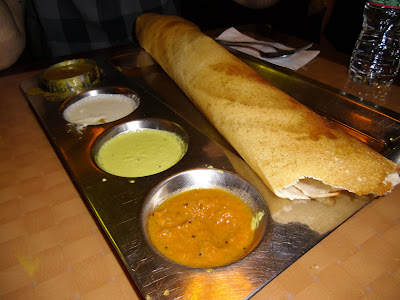 My order of the chana batura was a mild, unappealing looking chickpea stew served with deep-fried dough literally dripping with oil.  The stew was decent at best, the bread only tolerable. 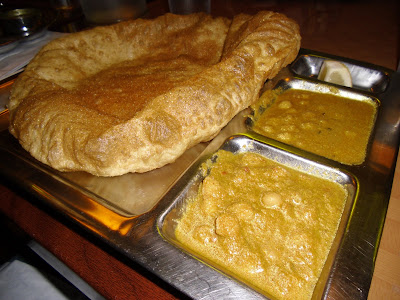 Underneath the bread was a thick slice of white onion; anyone have any idea why??

Unfortunately (or fortunately: depending on how you look at it), one person at our table never received his dinner.  I suppose that in the same way they only had enough filling for one of the masala dosas, they had none for the vegetable dosa he ordered.  So, it would seem that their tactic was to just simply ignore him.  Eventually, one of our group physically got up from the table in order to seek out a restaurant staff member and let them know that we were one dinner short.  The response was a mumble about there being some sort of issue in the kitchen, but no one ever attempted to correct the situation; instead, our table was avoided like the plague.  When a friend went up to the register to say that we were done eating and that the final meal had never arrived, the answer was, "Okay, so you want the check?"

Actually, what we all wanted was just to go home and forget this "meal" had ever happened.
Posted by Abby Bean at 10:23 PM