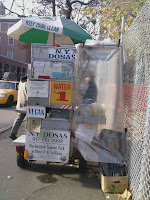 Thanks to Supervegan, I made my way to the NY Dosa cart on Washington Square South right outside of the park on an exceptionally warm and sunny weekday in November. Comfortingly, it looks like any other cart until you get close enough to read the menu and see the exclamations of "vegan" and "dairy-free" alongside the multitude of print accolades this vegan cart has amassed thus far.

Despite being a veritable celebrity to vegans far and wide, Thiru, the owner & "Dosa Man", is instantly welcoming. I half expected him to be the Sri Lankan, dosa-doling version of the Soup Nazi, but that couldn't be farther from the truth. He never stops working as he simultaneously cooks and greets, without ever rushing a customer or an order. While you wait he regales you with NY stories and history as he brings you behind the cart into his spotless kitchen to show you how his artistry and fresh ingredients combine to turn into something much more spectacular than the simple word lunch implies. He effortlessly endears himself to each and every customer whether new or familiar and you feel as though he had been looking forward to seeing you rather than vice versa.

The food is outstanding, high quality, generously portioned and extremely affordable. While many upscale Indian restaurants offer minuscule, greasy samosas consisting of thick dough, a few tasteless potato cubes and a pea or two, NY Dosas' are practically the size of your head: overflowing with tasty ingredients and practically a meal in and of themselves. The roti is also a delicious appetizer, similarly stuffed but with differing spices that I couldn't place but of which I loved the contrast. Next time I should try the veggie spring roll and drumstick, but I don't know how I'll bypass the confirmed goodness of the roti & dosa. Perhaps a to-go bag?

The main event: I asked for the most popular dosa and he wasn't lying: everyone on line in front of and behind me ordered the same- the Pondicherry Masala Dosa. The last time I had a dosa I was seated at a well-known, cloth napkin establishment on curry row and was disappointed to have been served a ginormous crepe containing a minuscule amount of spiced potatoes. In contrast, NY Dosas' version is a dosa the way it was intended: huge and proportionately filled with potatoes, spices, and fresh, crunchy veggies spiced to your liking. Accompaniments included soup and generous helpings of at least four chutneys: including a super fresh and unique coconut.
There are so many incredible lunch options in the area, but I'm going to be hard-pressed to pass up the Dosa Man in the future.
Posted by Abby Bean at 10:26 PM