As someone who is uber-wary of ghee lurking in vegetarian Indian food, as soon as news of the new, vegan-friendly, Indian restaurant Yogi's Kitchen buzzed onto my radar I was anxious to try it.  The ayurvedic menu showcased online seemed significantly different than traditional Indian offerings, but I didn't give it a second thought.  Then, when I saw the awning, I was sure I was in for an Indian feast.

The restaurant is lightly staffed, roomy, and bright.  The green-hue is courtesy of strategic, colored lighting. 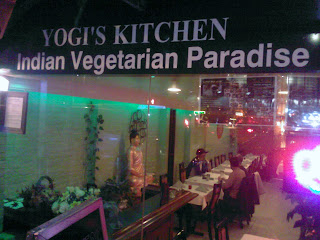 There are no alcoholic libations offered at Yogi's kitchen, so we ordered soft drinks.  Oddly, the soda contained no ice and the lemonade, while sporting a few cubes, was ginger-infused without any warning (I'm not a fan).  They didn't hesitate to bring us ice when asked, but since every diner in the restaurant made the same request, I'm thinking maybe they should consider asking your preference when you order. 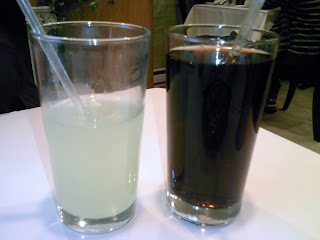 Only a few pages long with a handful of items on each page, the menu is quite limited and repetitive, so I recommend reading the descriptions of the assorted items- such as the appetizer sampler and vegan thali- carefully, so you don't wind up double ordering anything you don't necessarily want seconds of.  As far as "vegan" items are concerned, they are not specifically noted on the menu except for all of the pizza varieties and the vegan thali.  When we asked the waiter about everything else, he was unexpectedly blase with his answer of, "Most things are vegan" and, when pressed, said only that he thought that the Murmura Chaat wasn't vegan.  For the record, I find this laissez-faire attitude towards veganism infuriating at vegetarian restaurants.

We started off with a sprout salad.  After picking off loads of un-advertised cilantro we were left with an extremely lightly dressed, fresh, sprout salad.  There was some kind of spice mixed in that looked like green mustard seed; I'm not sure what taste it contributed, but unfortunately it added an unsettling crunch to the dish that was reminiscent of getting egg shell in your scrambled eggs. 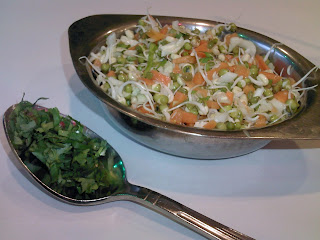 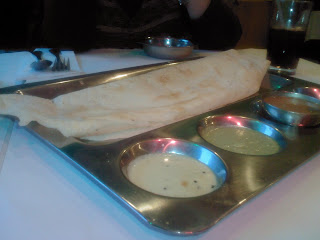 I'm admittedly spoiled by NY Dosas' overflowing versions, so I was extremely disappointed that, as with most traditional dosas, this one wasn't exactly "filled".  The entire dosa contained about a 4 by 3 by 1/2 inch square of what happened to be extremely tasty filling, but it was not enough quantity in my book.  It was served with sambar and two chutneys that looked too creamy to be vegan, but one depression was curiously empty.   I asked for it to be filled with tamarind chutney; I love tamarind chutney. 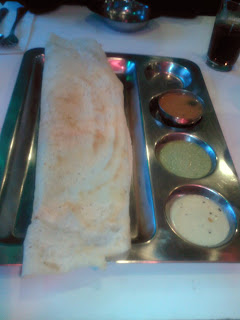 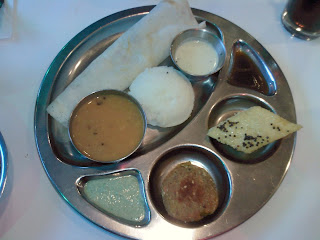 The mini dosa was as good and proportionately as un-filled as the giant one.  The idli was a robust addition to our second serving of sambar.  Again, I wasn't sure about the white sauce or the green, so we stuck with the teeny portion of tamarind chutney in the corner.  The dhokla tasted like light, non-corny cornbread: pleasant, but almost tasteless.  Aloo-tikki is one of my favorite Indian dishes because it tastes like a spicy, Indian knish.  Unfortunately, this version was much too lightly spiced for my tastebuds. For dinner, VM chose the Vata Pizza: onion, green peas, carrot; it too was served with the green chutney and even more sambar. 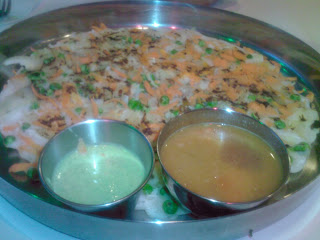 The texture of the dough/crust was very similar to uppatham, except that the (seemingly raw) veggies weren't so much incorporated into the pancake as settled into the top.  It was extremely dry and doughy; overall, in a city known for its impeccable pies, I'm not comfortable with the title of "pizza" having been bestowed on this dish. 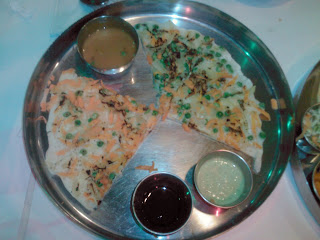 And finally, for my dinner I chose the Vegan Thali: 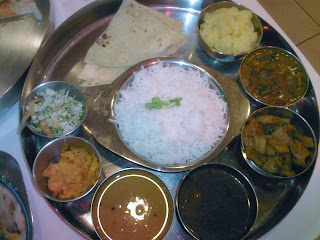 It consisted of (clockwise from top): 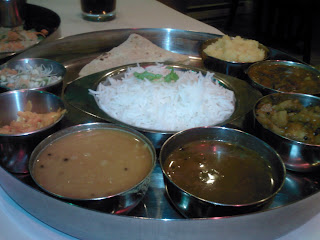 To be fair, I visited Yogi's Kitchen completely unfamiliar with ayurveda and expecting a more traditional Indian experience; that was my mistake.  There were no samosas, pakoras, or rich and creamy dishes to be found.  Having eaten there I can only describe it as showcasing fresh, healthy offerings with minimal Indian flair.  The owner came out towards the end of our meal and was much more friendly and talkative than the waiter.  He explained a bit about ayurvedic cooking, which we found very interesting.  Perhaps he would consider including this kind of information either within the menu, or instructing the waitstaff to share it over the course of your meal as a welcome point of interest.
But, as for us, it's not our cup of tea.  We enjoy traditional Indian food for the spice, flavor, texture, and variety; to us, Yogi's Kitchen offered something else entirely.  I presume that they have a specific, health-oriented, niche clientele and I wish them the best to attract them.
* Yes, THE Matthew Modine.  I happened to glance over at another table and there he was.  Not one to interrupt someone's meal, VM was able to catch him on his way out in order to tell him how much she loves Fluke and he was kind enough to share a personal story about making the film.  Matthew, if you're reading this she also loves Flowers for Algernon!
Posted by Abby Bean at 8:56 AM