Night of Bliss, Courtesy of Luna and Larry's Coconut Bliss 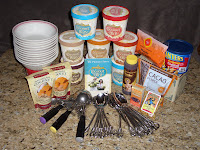 Question: How do you get carnivores to admit that a vegan diet isn't all about the sacrifice of taste and open up a dialogue about the cruelty involved in the dairy industry?
Answer: Start with Luna and Larry's chocolate hazelnut fudge Coconut Bliss ice cream and go from there.
As one of the winners of the Night of Bliss contest, which provided one person from each state with enough goodies to host a Coconut Bliss party for 20-25 people, I decided to share the evening with omnivore friends in order to open up the world of vegan eating to them in a fun and light-hearted, make-your-own-sundae kind of way. Sure, I only serve vegan food at any gathering held at my house, but people who are used to consuming the standard American diet easily bypass the offerings that are more foreign to them (you'd be surprised at how many people haven't ever eaten lentils) and stick with the more mainstream and recognizable staples like hummus and guacamole. However, not many people can pass up ice cream: especially if that's the point of the whole event. And, the make-your-own-sundae aspect doesn't hurt either.
The ingredients: After canvassing the Coconut Bliss offerings within the tri-state area with ice packs and coolers in tow (thanks to Pangea Daiya orders), I wound up with a few pints each of the following assortment: Naked Coconut, Dark Chocolate, Chocolate Peanut Butter, Chocolate Hazelnut Fudge, Cherry Amaretto, and Cappuccino. Admittedly, I'm not a fan of fruit flavored desserts and so I chose to omit such Coconut Bliss offerings like Pineapple Coconut, Vanilla Island, and Strawberry Lemon Love from the offerings.
Some delicious toppings were provided as part of my contest winnings:
Essential Living Foods organic chocolate covered goji berries: To compare them to raisinettes would be a huge understatement, but you get the idea...multiplied by a million on your taste buds. Everyone went gaga over these and there was a lively debate over whether they were better enjoyed room temperature by the handful, or a little frozen from being paired with the ice cream. My vote: by the handful, so you could enjoy the tastes and textures to the fullest. These morsels are delicious, good for you, and good for the planet. Check out their website and order some goodies.
Grizzlies Brand organic Calypso Crunch granola: As a sweets lover surrounded by glorious ice cream and topping options, I uncharacteristically wanted to pour some of this granola into a bowl of vanilla soy milk and call it a day. Instead, I sprinkled it over some Naked Coconut ice cream and enjoyed it so much that I had to go back and taste each individual ingredient dry so that I could confirm the deliciousness. They have a ton of flavors (and other products) to choose from, but Calypso Crunch was right up my alley with coconut chips (giant, toasted flakes) and cashews.
Navitas Naturals sweet raw chocolate nibs Cacao Power: How can you go wrong with ultra dark, sweet, cacao crunchies sprinkled generously onto your already chocolatey sundae? You can't. This sweetened superfood reminded even me how healthy and delicious raw options are and I've learned even more by browsing their website; I urge you to do the same. If you do it whilst enjoying a sundae covered in nibs, more power to you.
And I also provided some house sundae topping favorites: Holy Kakow chocolate syrup, pecans toasted with cinnamon sugar and maple syrup, wet walnuts, Magic Bullet crushed Chick-o-Sticks, peanuts & raisins, Go Max Go candy bars, chocolate covered pretzels, Laura Lee's Flaky Peanut Butter Treats, and rainbow sprinkles.
More important than all of the delicious sundaes that were enjoyed was the fact that I learned something very important and had the opportunity to explain something that would have otherwise continued to go misunderstood. Without me knowing, these omnivores that I've known for a long time (some even before I was vegetarian, let alone vegan) didn't understand why people become vegan. They equate vegetarianism with "not wanting to kill animals", but don't understand how dairy factors in, since the animal has to be alive to provide milk/eggs. As strange as it sounds, the idea of these animals living lives of cruelty never occurred to them. And even now, as the term factory farming is in the news as being an environmental issue, the cruelty that is associated has yet to go mainstream. So here I was, thanks to my contest win, in the position to explain that the idyllic image of happy cows being hand-milked is a fallacy of the highest order. So, between my calm, fact-oriented explanation and the delicious Coconut Bliss, I think I may have changed some minds about veganism...or at least gave my omnivore friends an alternative option to reach for in the dessert freezer.
Thank you, Chocolate Hazelnut Fudge, for being the favorite flavor of the evening and to Coconut Bliss, for the opportunity.
Posted by Abby Bean at 2:00 PM