A Meal at Peacefood Cafe

I finally had the opportunity to return to Peacefood Cafe on an empty stomach, with the intention of trying just about everything enticing I had spied but not tried on my previous visit when I enjoyed only breakfast (and dessert). 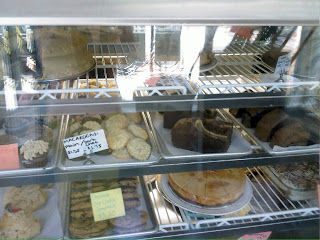 Upon entering the bright, airy restaurant, you can't help but ogle the impressive dessert case, along with all of the fresh breakfast treats that fill covered dishes along the top and side of the case.  But I was here for some serious eating; the bakery items would have to wait (who said that?).

As with last time, the rules of the restaurant are a little confusing.  It gives off a very casual vibe, but a little indication: verbal or written, of where to go would be greatly appreciated.  Wait to be seated?  Order at the counter?  It's a bit of a mystery and the waitstaff's acknowledgement and assistance of obviously confused clientele is still hit or miss.  In their defense, it is relentlessly busy.

Once seated, the somewhat tag-team service comes across as significantly unbalanced since it ranges from super-efficient and friendly to not at all interested.  Sometimes the table is set with paper menus, sometimes you mosey yourself up to the counter to grab one yourself (it's difficult to see the menu that is printed on the wall from your seat in the dining area).  No one tells you the specials; you can read them off the board at the counter.

Because the place is perpetually packed and bustling, any of the teamwork-oriented staff is ready to take your order as soon as your ready.  The only problem is, that's where the efficiency dwindles.  The selections don't necessarily come out in any discernable order, and there is minimal no effort made to ensure that everyone at the table has received at least one portion of their request at any given time.  In other words, the food comes out in dribs & drabs.  But, because it is all so delicious, you can't help but just eat it as it comes.  This is fine for diners who like to share, but not so much for those who don't. 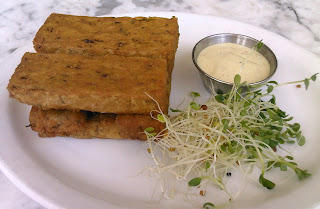 Our side order of chick-pea fries was inexplicably served first, and alone.  They were completely different from the ones I covet from Candle 79, but equally fantastic in their own way.  Although the menu description is, well, non-descript: they are actually served deliciously Indian-spiced with a cooling dipping sauce.  Highly recommend.  In fact, much like Candle 79, I probably wouldn't visit without ordering this dish. 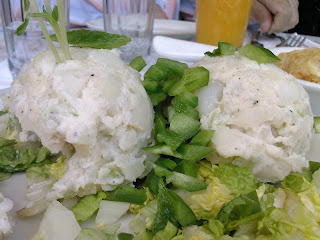 Next served was our side order of potato salad.  While it looks like ordinary potato salad with celery and capers, it also had a very pleasant something extra.  Going over the menu description I can only attribute it to the addition of onion juice...and now I want to get some for when I make potato salad at home.  Actually no, now I just want to go to Peacefood when I feel like having delicious potato salad.

My somewhat random order of a veggie savory biscuit with cheese no longer seemed odd considering the bizarre order the courses were being served in, and I was anxious to dig in.  I asked our main server if the cheese was Daiya and he said he didn't know.  I confirmed that they use Daiya in other menu offerings and he responded, "Yeah.  So, probably."  Indifference be damned, that was one delicious veggie cheese biscuit!  I think it would have been even better had I taken it home, warmed it in the oven, and covered it in gads more melty cheddar Daiya. 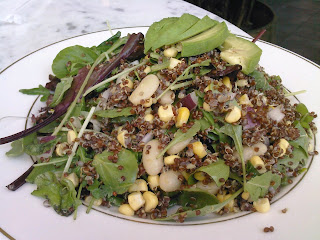 The fluffy quinoa salad was a huge plate of "beans, baby greens, sprouts of the day, avocado, sweet peppers, corn & onions" in a light lime mustard vinaigrette with a very generous sprinkling of quinoa.  I don't usually order salad when I'm out, but this was so fresh and delicious that not only would I highly recommend it, but I would certainly try any of the other salad offerings on future visits.  Head's up, Asian greens; I'm talking to you (minus cilantro). 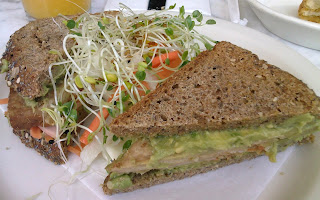 As a tempeh lover I had to try the tempeh avocado sandwich.  Given how fresh all of the salad ingredients were, I was a little disappinted that the avocado spread seemed a little discolored- even though this doesn't and didn't affect the taste.  Served with a generous helping of pickled radish, carrots, and jicama (hold the cilantro), I assembled myself quite the alterna-Banh-Mi between the baked, marinated tempeh, and toasted whole spelt rye.  I think it would have been less messy to eat had it been served on fresh, un-toasted bread; but it was very good.  My vegetarian dining companion wanted to go for the mushroom panini, but I unabashedly veto-ed her.  So, it is definitely on the list for next time, along with the vegetable tempura and the surprisingly incredible-looking raw plate I eyed at another table.

And then it was time for dessert and I was stuffed.  The begrudging omni had chosen to order separately and had eaten only dessert up until this point (as well as a few bites of our seemingly irresistable potato salad; see photo), and the vegetarian was in general lightweight form: leaving the bulk of the lunch consumption up to me.  Therefore I could not fit in another bite.  The answer?  Take-out! 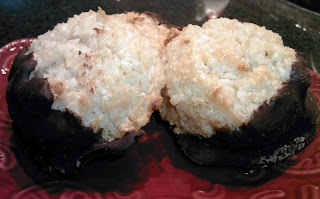 I had to bring home some of their tried & true chocolate-covered macaroons.  While I recall them having had more of an almond flavoring in the past, they were as fresh (soft and moist) and yummy as I expected: even days later. 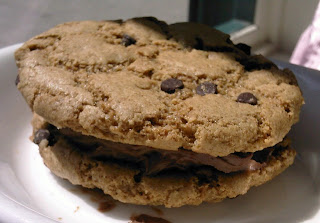 And, I could not help but to order a chocolate chip cookie sandwich after having watched the omni devour one that he inexplicably couldn't describe.  Well, I can: YUM.  And, WOW.  I've heard of places offering frosting/icing filled cookies and the idea has never appealed to me in the least.  But this extraordinary creation consisted of two deliciously crisp chocolate chip cookes sandwiching a minimally-oozy chocolate pudding like center: making for a scrumptious treat...merely minutes later when I decided that I did have room after all it was entirely too warm of a day to carry around such a dessert and expect it to survive intact.

So there you have it: Peacefood Cafe's food continues to be of extremely high standard, while the service and organization a little less so.  If the crowd is any indication, they have nothing to worry about; I too will be back: repeatedly.  But some semblance of order would still be appreciated to do justice to their incredible food!
Posted by Abby Bean at 8:26 AM