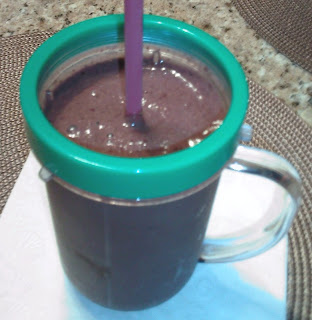 As a lover of dark chocolate, I have always just assumed that I would like raw cacao.  However, when I finally decided to try some organic, raw, cacao nibs I was more than a little disappointed.  They were delightfully crunchy, but a little too bitter.  Plus, there was an underlying taste I couldn't quite put my finger on.  I tried to bake some into a peanut butter cookie (in place of a non-vegan chocolate kiss), but it came out simultaneously unmelted and slightly burnt (my baking prowess is second only to my cooking prowess).  I was left wondering what I was going to do with the rest of my bag o' nibs.  Smoothie to the rescue. 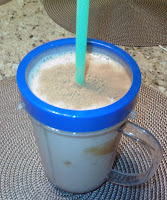 I am a simple smoothie type of gal: one fruit, one milk, sweetener...never juice or veggies (ack!).  My standard is blueberry & soy milk, but if I'm feeling crazy I'll try banana with coconut milk & cinnamon.  Per usual, I don't mix chocolate (dessert) with fruit (healthy).  But I had inexplicably picked up some frozen dark cherries from Trader Joe's and thought that they mightn't be horrible mixed into a shake smoothie with the cacao nibs.  Perhaps the residual effect of the cherry chocolate almond cup incident?  Whatever the impetus, the mixture was scrumptious.

I know that cacao is full of antioxidants and a lot of other good stuff (iron, fiber, magnesium), but basically I'm here to tell you that it gives your smoothie an unparalleled chocolatey taste that trumps all of the healthy reasons that would otherwise lure you to partake.  While the taste of the plain cacao was a bit too pungent for my palate, it was somehow perfect within my black cherry smoothie.  I realize that most people use the powdered cacao in smoothies, but I wound up really liking the crunchy bits that remained from my nibs: reminiscent of the millions of non-vegan coffee chip shakes I'd consumed as a teenager working in an ice cream store.  Slurp, swallow, munch, repeat.

So, here's my "recipe":
Take one Magic Bullet mug and fill it up half way with frozen fruit (I used dark cherries).
Cover the fruit with milk (I used soy) & squirt in some agave.
Generously spoon in cacao nibs (I proudly used six teaspoons).
Whir away, adding milk and/or ice depending upon how thick you like your shake smoothie.

Genius, I know.  The cookbook will be out soon.
Posted by Abby Bean at 9:40 PM