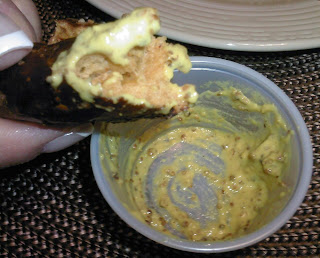 And so, much likes cookies are simply a vehicle by which to transport copious amounts of chocolate chips into my tummy via one tidy container, and tofu pups are simply a base for the bun-filled boatload of relish, sauerkraut, and jalapeno wasabi hot sauce as it sails towards my mouth, so too have plain, hot, street pretzels become simply a carrier by which to ingest various, flavorful mustards.

Well, no more.  Enter delicious Sigmunds Pretzels.  Located in my favorite part of NYC, the LES, Sigmund offers about a dozen pretzel varieties on any given day: most of which are vegan.  I emailed to inquire and received a prompt and friendly reply:

All our pretzels are vegan (no egg or animal products, like milk or butter) except for the cheese ones and caramel pecan (have heavy cream in the caramel).

So, with a jar of maple horseradish mustard at home awaiting our return (only one of Sigmund's dips are vegan), I hightailed it over to what I hoped would be the pretzel equivalent of the exalted Pommes Frites.

Sigmund is much bigger than I expected, with plenty of seating to enjoy your fresh-baked pretzel immediately if you so choose.  Oddly, we arrived to find the front door locked and all of the chairs up on the tables even though it was over an hour till closing, but were invited to enter once four people were noticed gathered outside the door.  Since I visited later in the day, the pretzels weren't moments fresh from the oven; so, I decided to take them home to be enjoyed after a brief re-heat in the toaster oven.  Ok, this is not completely true.  While I do prefer my pretzels hot and slathered with my own mustard, they were really trumped by nearby Lula's; you can't take a cone home, people!

It seemed like the shop had enjoyed an extremely busy day, but even though there weren't an abundance of pretzels left, there were still plenty of flavors to choose from.  Because you can't ever ask enough times, my vegan friend and I confirmed which of the current flavors were vegan (the counterperson didn't hesitate: all but the cheese) and made our decisions: 1 cinnamon raisin and 1 seven chile for me, 1 salt and 1 poppy seed for her.  We were both given complimentary whole-grain mustard, the only vegan dip.  FYI, it wasn't complimentary because we're special; dips are free. 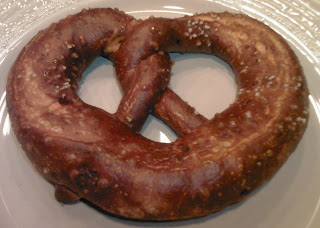 I tried the seven chile pretzel first.  Immediately I was blown away by the texture of the pretzel; it was soft, gourmet, hot pretzel perfection.  But then I realized that it wasn't spicy!  It's true that I like things extremely spicy, but it seemed that the few flecks of chile pepper I could see within the pretzel couldn't possibly have been a combination of seven hot chiles, as one would assume.  So, while the overall pretzel was extremely good, I was severely disappointed in the flavor.  While I was expecting to simply accent this pretzel with spicy mustard, I wound up having to seriously dunk (note: Sigmund's wholegrain mustard was really good). 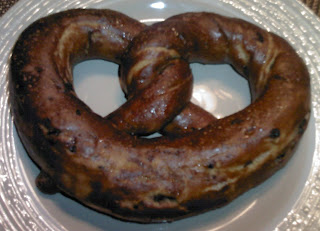 Next up was the cinnamon raisin pretzel.  While it did not start out completely coated with cinnamon sugar like the un-vegan Auntie Anne's cinnamon version that I loved, I admit that I fudged it by over-heating: thus causing what was there to pretty much disintegrate. 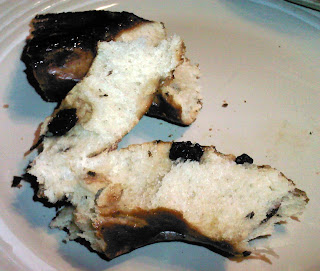 So, I was further disappointed to find that the cinnamon didn't seem to be swirled throughout the dough amidst the dots of raisin, as I would have liked.  Perhaps this is why the flavor was not overly, i.e., sufficiently sweet and cinnamony for my taste buds. 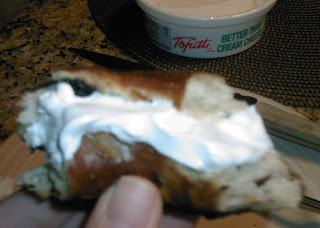 Once again I improvised, this time with cream cheese.  Admittedly, it wound up tasting a bit more like a most delicious, desserty, cinnamon raisin bagel, but it was enjoyed nonetheless.  (Looking back, I should have used the chocolate hazelnut spread that's been languishing in my pantry.  If anyone is wondering, hindsight particularly haunts food bloggers.)

My vegan friend also enjoyed and had high praise for her pretzel selections, and was very impressed by the staff's knowledge of their products' vegan friendliness.  Her one improvement suggestion was for some added salt on both the salt pretzel and the poppy seed pretzel (so too my seven chile).

Overall, in a city known for it's street pretzels, Sigmund gets the hard part right: the texture is perfect; even reheated days later.  However, the flavors are much too indistinct: needing a few notches worth of boost.  I expected to enjoy the flavored, gourmet pretzels without any accompaniment, but instead both varieties I tried required it.

Ultimately Sigmund has an extremely inventive idea, but it needs to be developed.  I have no doubt that once they up the flavor game they will indeed rank up there as the Pommes Frites of the pretzel world, and will thusly become part of my regular snack rotation.  Until then, though, I will not hesitate to revisit.  In fact, the next flavors on my list to try are: caraway, garlic parsley, and another cinnamon so that I can make use of my vegan chocolate, hazelnut spread.  Good luck, Sigmund Pretzels; you're almost there.
Posted by Abby Bean at 10:34 AM

Email ThisBlogThis!Share to TwitterShare to FacebookShare to Pinterest
Labels: pretzels