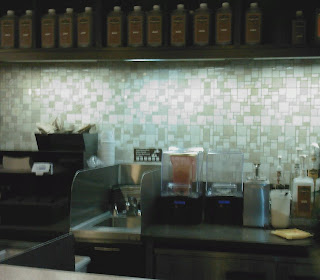 Like many vegans, I was excited that Starbucks decided to change the base of their frappuccinos, making them vegan-friendly.  I presume that this ingredient adjustment was intended solely for the purpose of catering to people suffering from medical lactose intolerance, so wouldn't it come in handy if Starbucks went a step further and labeled all options for allergens?  Customers who eschew dairy have been trained to specify "no whip" and request the substitution of soy milk for cow milk, but we shouldn't have to troll blogs for second hand information on which syrups and sauces are vegan, and we definitely shouldn't have to formally request that baristas utilize the dedicated soy pitcher (pink: pictured) when it is clearly company protocol to do so.

As vegans, we are used to being "accidentally" accommodated.  But just because our dietary restrictions are based in ethics and are thereby self-imposed does not make us a second class customer contingent.  In fact, we as a foodie community can be an incredible ally.  Many were thrilled about the impending vegan transformation of the frappuccino and the excitement manifested itself in what basically amounted to unlimited, free Starbucks advertisement on Twitter, Facebook, and the blogosphere.  The fact that Starbucks still chose to ignore their supportive vegan clientele is mind-boggling to me; but, I digress. 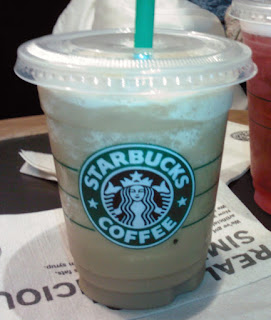 With the date of the nationwide launch of the new, dairy-free ingredient impending, I couldn't help but to pop into a Starbucks to see if the vegan version was prematurely available.  The server was excited to tell me that they did, in fact, have the new version to offer and seemed genuinely happy to have surprised and delighted me; unfortunately, I didn't notice until later that I was overcharged (how hard is it to correctly ring up two drinks?).

When the barista began to prepare my frapp in the "soy" pitcher (!) I thanked her.  She seemed very amused that I had learned about the pink pitcher through the vegan grapevine and wished me to enjoy my first frapp in a long time.  I was very surprised at how cloyingly sweet and "fake" tasting it was.  The novelty was appreciated, but I was glad that I had only gotten a tall.  Misstep: Is it too much to ask to be charged correctly? Overall: nice stroll down memory lane, but I wouldn't revisit. 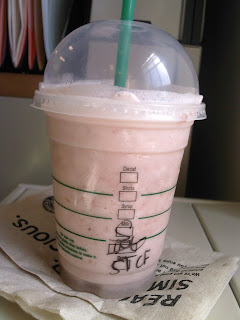 About two weeks later, on the first day of the half price frapp happy "hour", I decided to try another flavor.  The store was packed and understaffed: the employees already grouchy 1 hour into the 2 hour promotion.  The barista who made my frapp dutifully utilized the pink pitcher and wound up being extremely nice.  He noticed my soy, no whip specifications and, amidst the chaos, took the time to tell me to enjoy the new recipe that had surely brought me in.  The gesture was appreciated.

Unfortunately, the frapp was not.  I waited until I got back to my office to taste it and was disappointed to find that it tasted simply like fake strawberry milk; it wasn't frozen in the least.  The sugary, non-descript berry liquid simply sloshed around in my cup as if no ice had been involved in the process at all.  I considered going back to complain, but walking back into that madness was not high on my list of things to do; into the garbage it went.  Misstep: Ice!  Ice would be good here.  Overall: blech, ptooey. 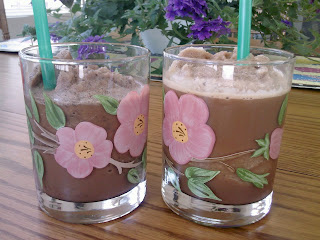 You'd think I'd have given up by this point, but I decided to give the old frapps one more solid try on Mother's day: providing me with automatic 2nd & 3rd opinions from the rest of the esteemed tasting panel (note regarding the glasses: in the house, my Mom does not eat or drink out of disposable containers).

The store was empty the entire time I was in, so I was chagrined that the barista buzzed around as if she were a trauma nurse with the fate of a hundred lives depending upon the speed at which should could prepare the sole two drinks on order.  I say this because she inexplicably felt the need to huff and puff as she simultaneously prepared the frapps.  You guessed it, only one of them was in the dedicated pink, soy pitcher.  I was drained of fight by this point, so I (disappointingly) let it go with a sigh.

While I was glad that these frapps were made properly (with ice), as you can see, the general texture is less than appetizing: I can only liken it to a partially melted Slurpee.  But Slurpees cost about $2.00 for a half gallon and they're not nearly as pretentious (okay, there's nothing whatsoever pretentious about a Slurpee).  The java chip* was the favorite of the two, but overall tasted like a watered down version of a frozen hot chocolate.  Additionally, at some point the chips began to taste waxy; we're not exactly talking high-grade chocolate here.  The dark cherry mocha tasted like neither, instead reminding me of a less potent coffee coolata of days gone by. Misstep: "Dairy" means milk and "Soy" means superior NOT dairy; is it really that difficult a concept?  Overall: The idea supersedes the reality; I'm over it.

So, despite the initial buzz, I've been left unimpressed.  Not only weren't any of the drinks something that I would go out of my way to repeat, but I found it extremely disappointing that in each Starbucks something went awry.  In an establishment where the average beverage contains inexpensive ingredients, but costs $5, shouldn't there at least be a certain attempt at efficiency?  And, not for anything, why all the ridiculous nickel and diming?  Soy continues to be an additional charge ranging from 50 cents to $1.00 (dependent upon the drink ordered), and even the substitution of decaf coffee for regular is an additional 50 cents (really!).  Maybe I'm just over accidentally vegan mainstream "stuff" and require more substance.  Although then again, maybe not: I still like Slurpees (Dr. Pepper, woot!).


* [UPDATE 5/2/12: It would seem that the Strawberries and Cream is NOT VEGAN.  It was recently reported that Starbucks uses crushed bugs (cochineal) for color- you know, instead of actual strawberries.  After the resulting firestorm of negative publicity, Starbucks now says they plan to stop.]
** [UPDATE 5/12/10: As it turns out, the Java Chip is NOT VEGAN.  Thanks to Veggywood for persisting until a clear response regarding ingredients was received from Starbucks- THE SECOND TIME (see 5/12/10 update notations).  SHAME on Starbucks for being so uncooperative, unclear, and wholly disrespectful of dietary restrictions with their misinformation and disinclination to make their ingredients known.

Email ThisBlogThis!Share to TwitterShare to FacebookShare to Pinterest
Labels: Starbucks