My fellow dark chocolate-loving friend and I went on a serious cup-hunt when Justin's first came out with their dark chocolate peanut butter cups; I think it's fair to say we've been hooked ever since.  I've been avoiding the new Go Max Go Cleo's simply because they are milk chocolate, but after recently being impressed by their Snap! bar, I figured I owed the Cleo's a chance. 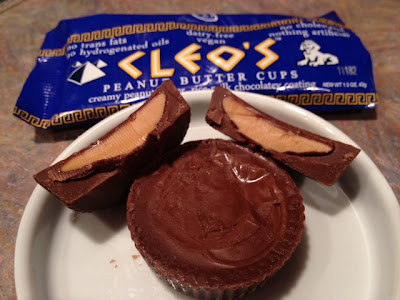 The peanut butter
The peanut butter in the Cleo's is really creamy.  This is crucial to note because sometimes the peanut butter in a Justin's cup is contrarily dense and powdery.  Unlike their Reese's ancestors, this apparently isn't a result of staleness, but rather an extreme sensitivity to cold.  I know this because I've induced this phenomenon by putting them in the fridge.  Do not put them in the fridge!  Unfortunately, I've also purchased Justin's cups that were powdery even without a misstep on my part, so it would seem that stores have not necessarily received the "no fridge" memo.  To be fair, this has only happened 50% of the times I've purchased Justin's.  But, at $2 a pack, it's not really a gamble I appreciate.  I will say, though, that when not powdery, Justin's peanut butter is as dense and smooth as it should be.  Cleo's creamy peanut butter, on the other hand, seems impervious to anything you could do to them- consistently. 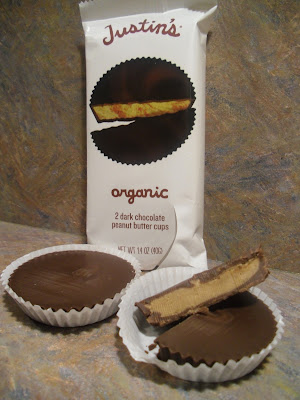 The chocolate
I'm partial to the fact that Justin's is dark chocolate, but they are also superior in ingredient proportion.  While every Justin's bite is relatively evenly distributed between chocolate and peanut butter, the Cleo's are seriously peanut butter-heavy in the center, with an extremely thin coating of chocolate above and below, and a considerably thicker shell around the edge and towards the peanut butter.  I don't recall the architecture of Reese's accurately enough to be able to compare the proportion authenticity, but I prefer Justin's to Cleo's.

While both options are impressive, I think it's fair to say that they each offer a totally different dessert experience to the peanut butter cup loving crowd.  As for me, I'd reach for the Justin's.  Of course this may change if they don't get their powdery problem under control...but, assuming they do, the dark chocolate and even proportion happen to do it for me.  Go forth and enjoy whichever cups float your particular chocolate peanut butter boat.
Posted by Abby Bean at 10:13 AM