After my multiple meals at Queen of Sheba, I wanted to see what fellow-Ethiopian-food-loving VM would think of the food and the place.

We started off with the lentil sambousa: a pair of Ethiopian style triangular phyllo dough pockets with spicy stuffing. 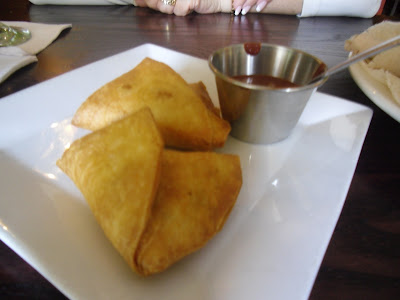 There was considerably more phyllo than filling (I think the ones at Mesob were more proportionate), but you can't really go wrong with vegan food stuffed into fried dough. 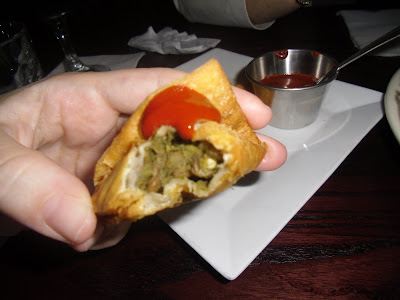 Also ordered was an appetizer of one of our favorite Ethiopian selections: azifa: green lentils, onions, and chili peppers coarsley mashed in an Ethiopian mustard vinaigrette.  It was more dense and finely chopped than any azifa I've tasted before, so the texture was weird.  I also thought the mustard was unnecessarily overwhelming.  Their injera, however, remains the best I've ever had. 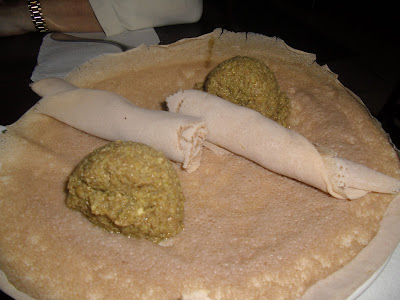 For dinner we both had the vegetarian sampler, subbing butecha for the shimbra asa.  To my surprise, the butecha- my previous favorite- was this time extremely dry and unappealing and wound up being left on the plate when we were done eating, along with the seemingly unseasoned, flavorless (frozen?) gomen and the limp cabbage in the atakilt.  The smooth shiro was our collective favorite, with the pungent misir a close second.
﻿
﻿Sampler:
Ater Kik Alecha: "split peas are cooked in onions, garlic and olive oil, mild yellow dish with a touch of turmeric and subtle blend of herbs and spices".

Shiro: "split peas are milled together with a perfect blend of berbere, herbs and onions, slow-cooked into a creamy dip for your injera."

Cabbage Wot: "cabbage, potato, and carrot cooked with onion and garlic, with a touch of turmeric."

Butecha: "finely milled chickpeas pan crusted in olive oil and reduced with lemon shallots and jalapenos." (I have tried and failed at this dish myself)

Gomen Wot: "finely chopped collard greens are cooked in their own steam with mild seasonings and olive oil."

Atakilt Wot: "fresh string beans and long cut carrot [don't be fooled; they're baby carrots] are cooked in tomato sauce with our rich blend of seasonings."

Misir Wot: "split lentils are stewed with onion, garlic, and a blend of Ethiopian herbs" 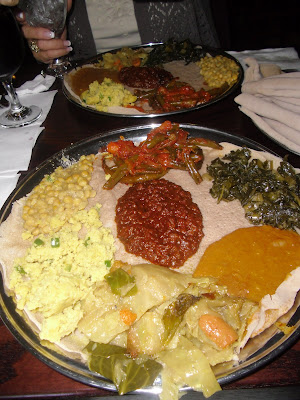 As is generally the case when you bring someone to a place that you like, I found myself re-evaluating QoS with fresh eyes- especially since the food wasn't as good as usual.  While VM and I both agreed that we'd enjoyed, we weren't blown away.  Additionally, it remains unfortunate that the waitstaff- however pleasant, is wholly apathetic.  But perhaps the worst part of the experience was noticing that the restaurant's interior, in the harsh light of day, is in much worse shape than I originally realized.  In fact, the obvious disinterest in the disrepair translates to severe disregard for the clientele, which is extremely off-putting in an eating establishment (for those of you keeping track, that's a triple dis...a trifecta of dis, if you prefer).  Queen of Sheba, Ethiopian restaurants are few and far between; get it together!
Posted by Abby Bean at 11:59 AM

Email ThisBlogThis!Share to TwitterShare to FacebookShare to Pinterest
Labels: Ethiopian, Queen of Sheba