Now that I am (just about) settled in my new home, it's time to entertain.  I tested the waters with a few (vegan) friends and then decided to invite the co-workers who have been so patient, supportive, and helpful during the past year of my whining renovation.  The invitation was essentially for a tour and what I described as a "light meal".  At that point I wasn't yet sure what the menu would be, but I wanted to be sure they realized it wasn't going to be steak. 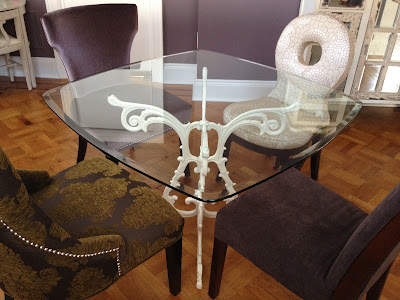 The pressure was on; I didn't want to make any vegan cliches, so- no hummus, chips & salsa, or tofu.  I also didn't want to serve anything unusual or dishes that would be deemed too convoluted to duplicate.  I also wanted to be able to prepare it ahead of time so that I could actually enjoy my company rather than spend the evening in the kitchen- all this in an effort to impart both the accessablity of healthy and delicious vegan food, as well as the ease with which you can eat compassionately.  With all of these rules in the back of my mind and the input and encouragement of many vegan friends, I settled on the following menu. 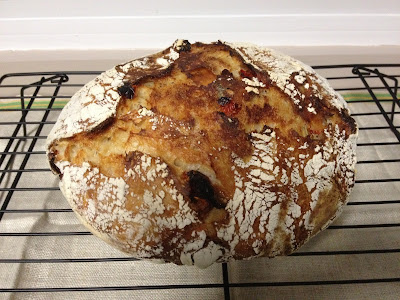 using Jim Lahey's My Bread recipe for basic bread and adding as many sun-dried tomatoes as I felt like cutting (I did not rehydrate them).  Note to self: guests are really impressed by homemade bread. 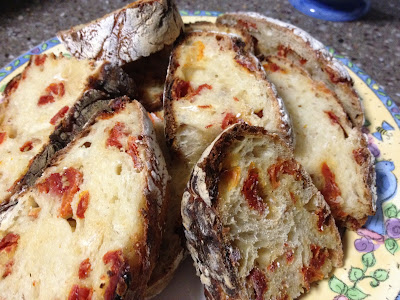 To accompany, Christine Waltermyer's lentil walnut pate.  You can find the original on her website (preferred), but there is a slightly different version in her cookbook, The Natural Vegan Kitchen.  This is my variation; you need only whir it all up in the bullet:

I'll admit this pate gives my bullet a run for its money, but don't be tempted to add too much liquid or it will wind up runny.

Simply whir it up in the bullet and massage into torn, de-stemmed, firm, curly kale leaves. 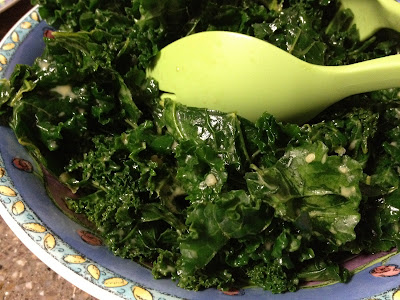 And, a chilled tri-color quinoa salad with toasted cashews, currants, chick peas, and diced red onion (next time I'd add more raw veggies for added crunch and color).  I deferred to my Horizons New Vegan Cuisine cookbook for a cumin-lime dressing. 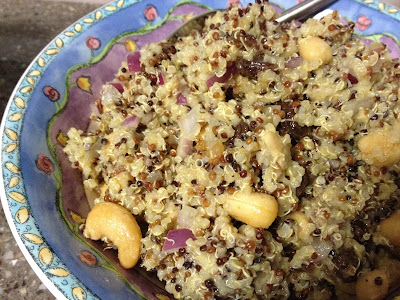 I was incredibly nervous that the group of omnis wouldn't like anything, but their reaction was positive from the start.  They weren't frightened by the presentation of unfamiliar foods (kale and quinoa were new to some) and each took healthy helpings of each dish.  They seemed to be enjoying their meal while they independently asked questions about nutrition and ingredients.  I wasn't entirely sure if they were being polite or if they were really interested.  And then, just when I was about to clear the table, one of my guests decided she was going for seconds...and all of the others followed suit!  By the time they were done noshing they all asked for recipes.  I would call that a raging success, no?

I'm not as much of an activist as some, but a little education accompanying a pleasant introduction to vegan food goes a long way. 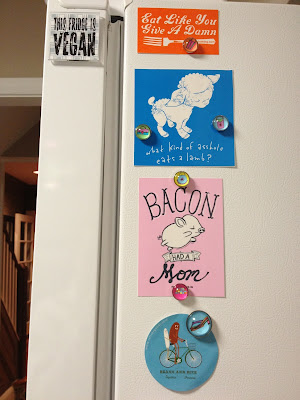 My wall of truth doesn't hurt either.
Posted by Abby Bean at 8:41 AM