When I visited Champs Bakery on it's opening day in August 2010, it wasn't fully stocked, but everything I tried was delicious.  I was excited that their goal was to become an authentic Brooklyn bakery and anticipated visiting for every bonafide and just-because occasion I could come up with. 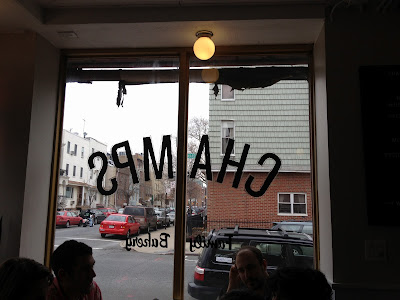 My second visit was much the same.  There hadn't been any aesthetic improvements to speak of and the offerings- while yummy- were still minimal in quantity and not exactly "authentic Brooklyn bakery"-esque.

I visited Champs a few more times after that, but for naught.  The staff seemed bored, the space neglected, and the offerings uninspired.  When I go into a vegan bakery and don't get anything; something is radically wrong.  And so I took a break from Champs.

Lots of things have happened in the world of Champs since.  They closed down their relatively nearby sandwich shop, Boneshakers, and have turned Champs into a diner.  I was skeptical, but so many friends and fellow bloggers (even the healthy ones) were raving, so I had to give it a shot.  The second I laid my eyes upon their "A"* I knew I had made the right decision. 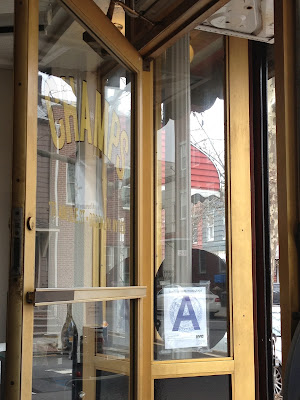 I was warned that there would be a wait (another excellent sign) and there was, but not too long. 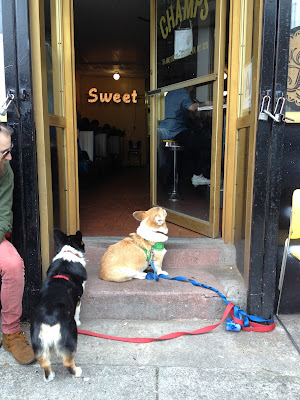 The booths are roomy and adorable- all vinyl and glitter.  There are no juke boxes on the table, but judging by the smell, they clean the tables with authentic diner spray!  Eventually it subsides.  In contrast to their old skool aesthetic, they serve an unexpectedly mean chai latte. 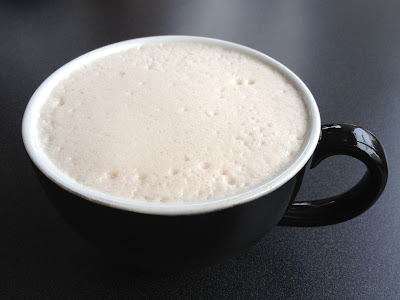 Let me forewarn you about two things so that you're not surprised.  1) They serve cow's milk for coffee.  I don't know why, but when I asked they assured me that everything else in the establishment is vegan.  2) Be prepared for the thickest head of foam you've ever seen on a latte. 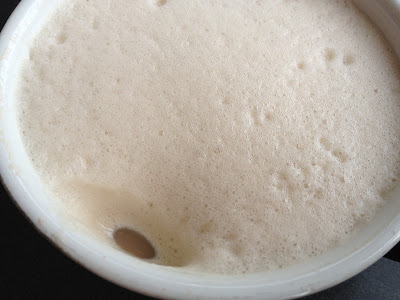 The menu is pretty awesome, and especially befitting the dinery vibe; I dare you not to find at least 3 things you want to try right off the bat. 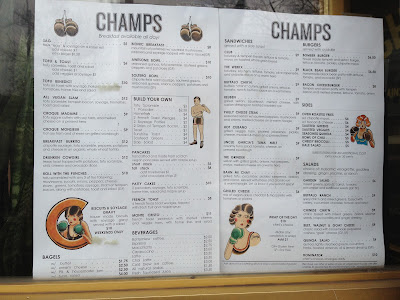 One friend chose the biscuits and soysage gravy: "house made biscuits with soysage gravy served with a salad".  It was all Northwest-looking with it's white gravy and sausage.  I'm not a b&g fan, so I didn't taste it, but the other tablemates all appreciated the dish. 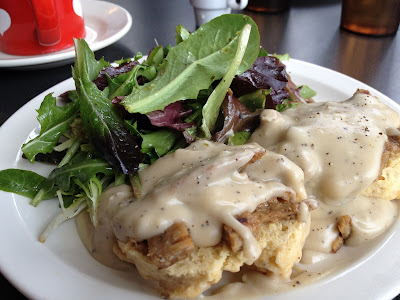 Another friend went with the tofu Benedict: "tofu on toast with soysage, hollandaise, sauteed tomatoes, home fries and salad" for the fourth time in a row; it's fair to say she's addicted. 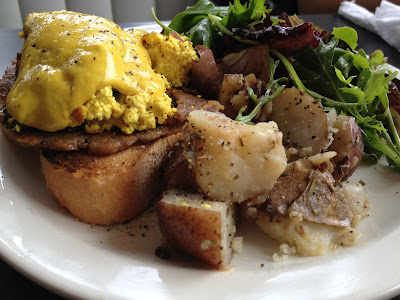 I settled on the monte cristo: "french toast sandwich with melted cheese and veggie ham, with home fries and salad", a particularly impressive looking non-vegan sandwich that I've watched being consumed around me my whole life and have never gotten my hands on.  The traditional non-vegan version that I'm familiar with is quite a bit different than the Champs version.  The minor omissions were turkey and raspberry jam, but the major omission was not having the entire sandwich dipped in batter and fried.  Yes, really.  I'm sure this method is healthier, but I was still disappointed.  Other than that, the greens were mixed (no iceberg here) with a nice, light dressing, and the potatoes were a surprising miss: undercooked and much too mushy for my taste.  But overall, the charm and the possibility already had me hooked; my plate was simply an image of  potential. 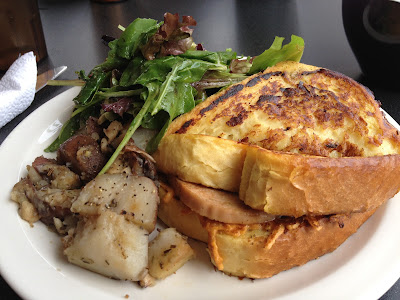 Yes, you read that right.  Here's the rub: even though it wasn't exactly what I was expecting/what I would consider an authentic nod to the original, my dish was representative of all that Champ's can achieve.  For instance, if I deconstruct the sammie, I'm impressed.  For starters, the French toast.  On it's own it would have been exactly the way I like it: soft and ready to be drenched in maple syrup.  And the ham & cheese?  Perfect ratio.  Throw in some tofu-egg cutlets & slap them on a kaiser roll and I'd be good to go.  If they'd just master the "home fries" we'd be all set.

Next up?  Dessert.  True diner style, you get up to peruse the packed case of brownies, bars, and cakes...as well as the various donuts (Dunwell), cookies, scones, muffins, etc. that are displayed up and down the counter.

My friends both gravitated towards the rainbow cookies.  I had a taste and, while okay, it wasn't close to the authenticity that I've managed to replicate in my own version of the rainbow cookies of my youth.  Solid effort, though. 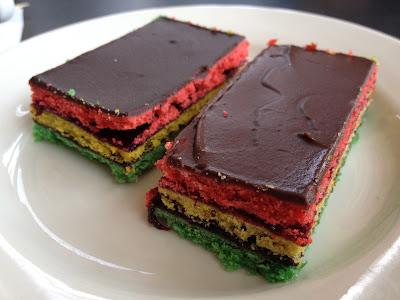 I chose two things (!): an oreo cake ball that was less like a munchkin and more like a fudge truffle, and the cereal cookie.  The true standout dessert, it was dotted with FRUITY PEBBLES (my fave) and marshmallows.  I mean, really.  Could there have been a cookie more suited to my palate?  It far exceeded my expectations; good thing there were only two left in the jar because I could have eaten a million. 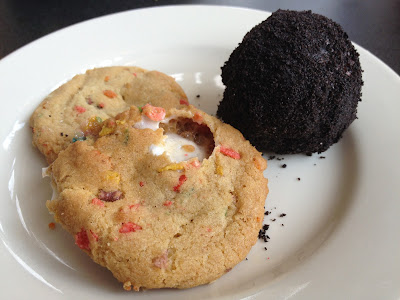 Final verdict?  Champ's has finally hit it's stride.  The dining area, the staff, and the offerings are all spot on.  There is a reason there is a continuous crowd waiting for a table; I will be revisiting shortly.

* As an example of how clean things were, I present the spotless cover of the Sriracha bottle: 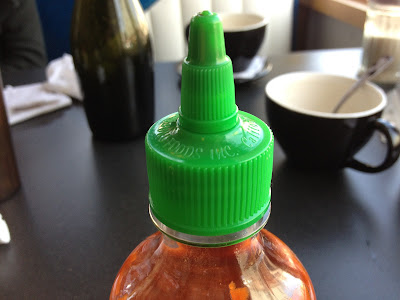 Ketchup bottle was the same!
Posted by Abby Bean at 6:58 AM

Email ThisBlogThis!Share to TwitterShare to FacebookShare to Pinterest
Labels: Champs