A Vegan and a Vegetarian Taste-test Quorn Vegan Burgers

I have a lot of vegan friends who were huge fans of Quorn products when they were vegetarian.  I, on the other hand, spent my vegetarian years eating french fries, cheese, and oreos; nary a meat substitute crossed these lips until I went vegan and, by then, Quorn was no longer an option.  So when they recently contacted me to see if they could send me a sample of their new vegan burgers, I was both excited that they were branching out and anxious to finally give a Quorn product a try. 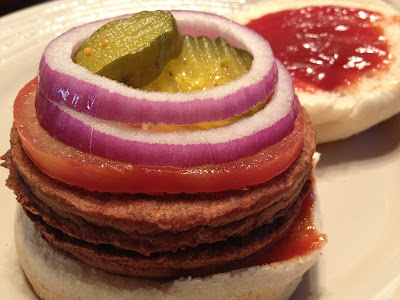 The burger on the box looked pretty meaty, which doesn't necessarily excite me; I don't like the look, smell, or taste of meat.  I prefer my veggie burgers to taste exactly like what's in them: beans, veggies, whatever.  The ingredients in these burgers were so foreign to me, though, that I didn't know what to expect taste-wise: "Mycoprotein (35%), water, textured wheat protein (wheat protein, wheat starch), onion, potato protein, sunflower oil. Contains 2% or less of rusk (wheat flour, ammonium bicarbonate), palm oil, natural flavoring from non meat sources, salt, sugar, tapioca starch, sodium alginate, smoked paprika, pectin, potato maltodextrin, barley malt extract, smoked yeast, potassium chloride, smoke flavoring, citric acid, gum arabic, silicon dioxide, tricalcium phosphate."  Ah well, all I needed to know was that it was vegan. 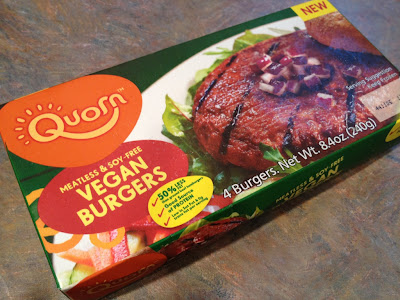 So, the actual burger doesn't look anything like the picture on the box.  Anything. Since it was so thin, I decided to make all four burgers: two each for VM and I to taste.  This is what they looked like frozen: 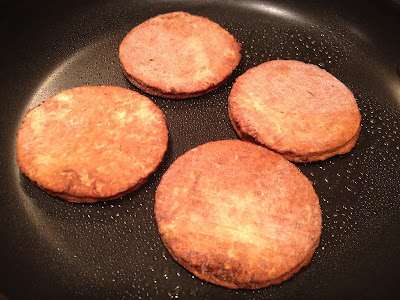 They didn't look much different cooked; certainly no closer to the image on the box.  I will note that they did smell appetizing. 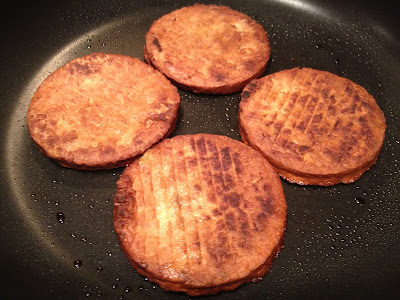 When I cut into the burger to investigate, it looked kind of like poultry.  There seemed to be a batter of some sort coating of the burger, which is what I think smelled so good. 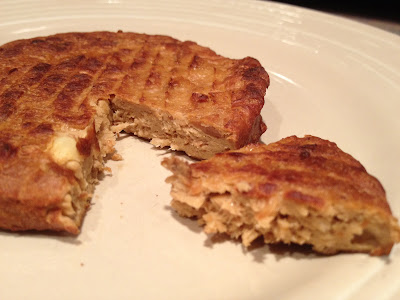 I piled up my double decker (VM stuck with a single) and prepared to feast. 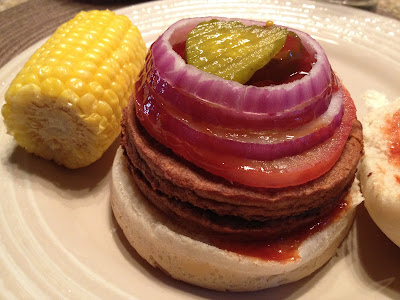 No matter how many fixin's, how much ketchup (I like ketchup!), it was not my cup of tea.  I removed one layer of burger almost immediately, but the texture and the taste of the single still did not sit well with me.  Unlike Boca, it was not reminiscent of a beef burger.  Nor did it taste like any veggie burger I've ever tried.  If I had any idea what one tasted like, I'd assume it was most similar to a turkey burger?  There was a gamey taste that I couldn't quite place; perhaps that's their "mycoprotein (fungi)" ingredient?

I will note that while VM did not suffer loudly through her meal as I did, she did pass on the leftovers.  So I don't necessarily think she liked it better, so much as she's just a nicer person than I am. 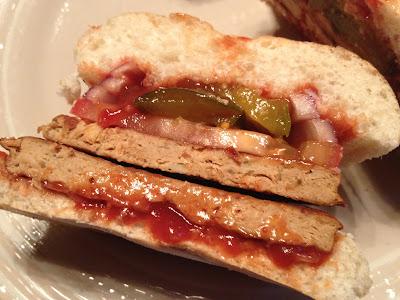 One oddity that I wanted to point out before any of you have a panic attack is that the nutrition facts for this burger currently indicate that it contains 5mg of cholesteral.  As we all know, there's no cholesteral in vegan food; so, what gives?  Marty's Flying Vegan Review was on the case; he contacted a Quorn representative and was basically told it was a misprint.  I can certainly forgive a mistake, but I do have to wonder why the same erroneous information is still posted on their website as of today, over a month later.  Surely it takes a while to reprint actual packages, but only a keystroke to correct an online error.  Hmmm.

In any event, it was very nice of Quorn to send me their product to try.  Perhaps I'm not the target audience for this type of burger, as I like my veggie burgers to fall on the side of veggies rather than burger.  Maybe some of you former burger/turkey burger/Quorn lovers out there will wholeheartedly disagree with my review.  If you think that's you, let me know and you just might win a coupon for a free Quorn product, courtesy of Quorn, that I hope you'll use to try these vegan burgers and report back.  Leave a comment by April 15, 2012, letting me know that you'd like to be considered for the distinct pleasure of (possibly) disagreeing with me and I'll let VM choose the winner.  [UPDATE: Check the comments for the announcement of the unfortunate lucky winners.]
Posted by Abby Bean at 8:50 AM