After the last, horrendous Indian-in-Jersey experience, I was due for an impeccable feast.  I found it, rather unexpectedly, in Princeton, NJ. 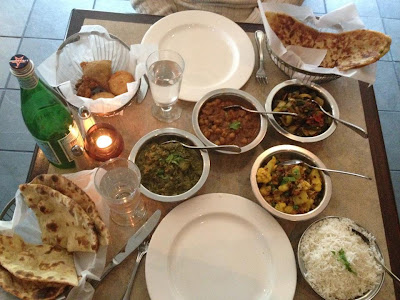 Tucked innoccuously in the back corner of a somewhat convoluted strip mall is the extremely vegan friendly, Cross Culture.  Coincidentally, it's in the former space of Zen Palate. 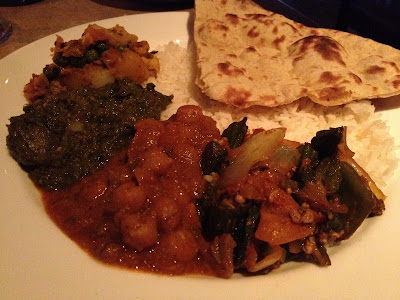 When I was invited to a celebratory engagement dinner I emailed ahead in order to avoid having to grill the server in front of a group of people I knew and didn't know in varying degrees.  The response I received was pleasant, specific, and accomodating; not only did they point out which vegetarian menu items were vegan by default (a lot!), but they stressed that they would be willing to tweak others in order to make them so.  It was obvious that they were familiar with veganism and most welcoming to vegan diners.

I am happy to report that the email was not just a rehearsed fluke; the servers are consistently aware and most courteously and unblinkingly obliging.  Yes, dear readers; lest you think this place is hit-or-miss, rest assured that I've now tested it out on four, separate occasions (for you), and the food, atmosphere, and service has been stellar every single time.  The dishes are divine; the restaurant is warm, inviting, and spotless; the servers are professional and kind: a dining experience trifecta of greatness!

Aloo Tikki: "Potato patties and green peas flavored with chili peppers and coriander."  I consider Aloo Tikki an Indian knish; these are larger, milder, lighter, and creamier than most I've had. 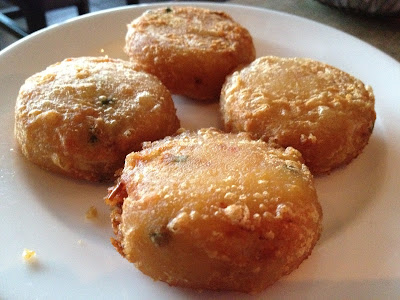 Papadum: "Thin and crispy lentil flat breads."  Sometimes Papadum have an underlying flavor I can't put my finger on and don't appreciate, but these do not; they are wonderful and huge: dip them in your tamarind chutney and munch. 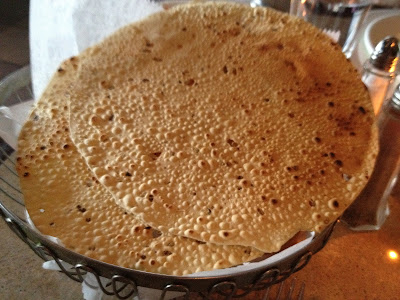 Vegetable Samosa: "Crispy fried turnovers deliciously filled with mildly spiced potatoes and peas."  It's a Vegetable Samosa; you can't go wrong.  Assorted Pakora: "Fresh vegetables dipped in a delicately spiced batter and fried to golden perfection."  Here's the thing: VM and I are pakora fanatics.  We used to go to an Indian restaurant Happy Hour and fill our bellies with them, leaving room only for a couple of cocktails (yes, she's the best VM ever).  There is no limit to the amount of pakora we can indulge in: good and bad.  But these pakora?  They were FANTASTIC!  Potato, cauliflower, and spinach/onion: it was hard to pick a favorite, so good thing we didn't have to. 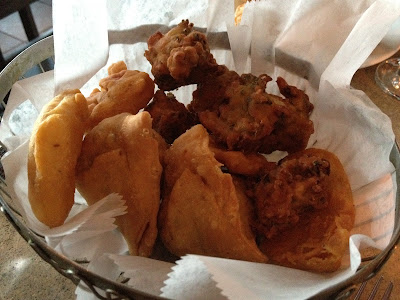 I promise you we didn't eat everything.  How could we?  We still had dinner coming.  (Apologies for the dark and sometimes blurry pictures; once the sun went down, the lighting at Cross Culture was positiviely ambient).

VM's first pick was Bhindi Masala: "Okra sauteed with onions, tomatoes and oriental spices."  A word about this dish: sofantistacallygoodwemayhavefoundanewfavorite!  I don't know how they do it, but the sweetness in this spicy dish is so unique; how has it eluded me for so long? 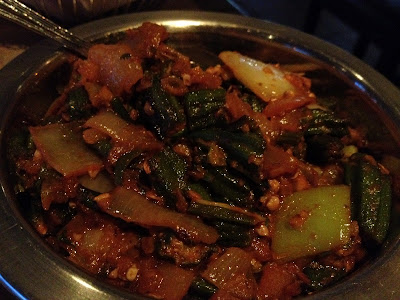 They were able to veganize the Palak Panir by omitting the cheese and adding potatoes. Voila! Aloo Palak: "Fresh homemade Indian cheese gently cooked with garden spinach and mild spices [and potatoes]."  Palak Panir was always one of my favorites, but even as a vegetarian I'd pick out the cheese cubes.  This is the best veganized version I've had; I was blown away. 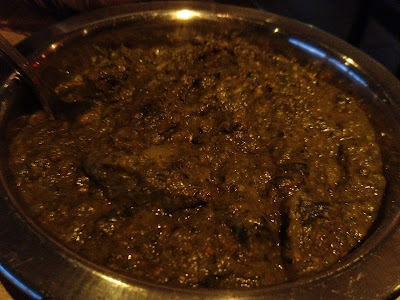 Next up, Aloo Gobhi: "Fresh cauliflower and potatoes seasoned with Indian spices, cooked to perfection with onions, green peas and tomatoes."  Admittedly, this dish is generally more a VM pick than my own.  But this Aloo Gobhi was the best I've ever had; I'd order it again anytime. 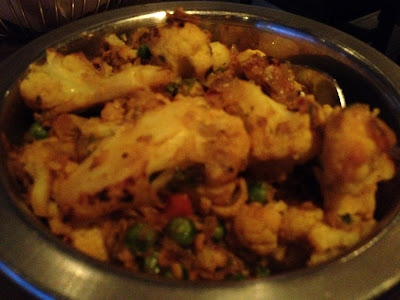 Can't find the Chana Masala on the menu?  Don't worry; it's under "accompaniments".  It should be under "necessities" because, really, it's not an authentic Indian meal without it.  Chana Masala: "Chick peas and fresh tomatoes cooked in traditional spices."  This is one of my favorite Indian dishes of all time and Cross Culture's version did not disappoint. 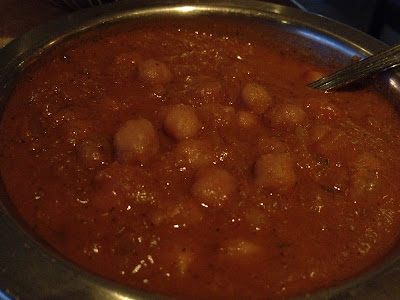 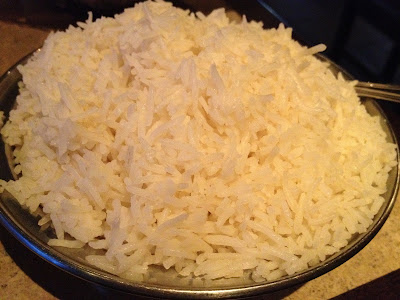 I ordered the Homemade Tandoori Roti: "Whole wheat bread baked in the tandoor."  It wasn't naan (not veganizable), but it made a fine subsitute.  I was told that the puri is also vegan (I'm not a fan), and the paratha veganizable.  VM couldn't resist; she ordered the vegetarian Aloo Paratha: "Paratha bread stuffed with delicately spiced potatoes."  I seem to have been too busy drooling to have taken a photograph. 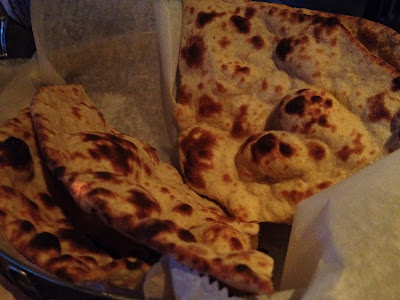 The leftovers were packed with pride and care, and the food reheated with ease. 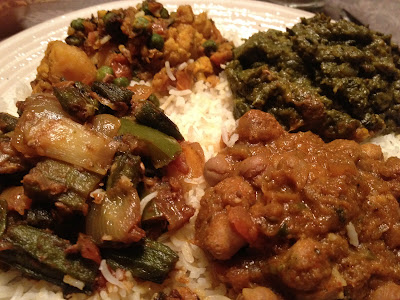 A couple of notes: 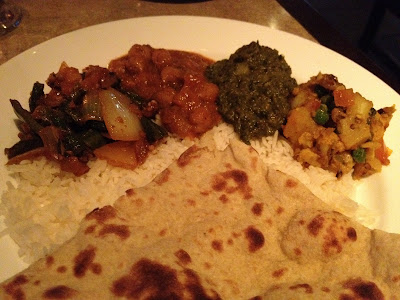 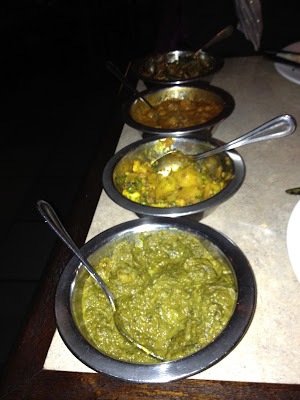 Cross Culture is a vegan-friendly gem tucked away in a Princeton shopping complex; support it!  I'd suggest a dedicated road trip, but if you ever just unexpectedly find yourself in the area, definitely give it a try.
Posted by Abby Bean at 5:55 AM