The Unexpected Hit and Miss of Vatan

I've been meaning to try Vatan's all vegetarian pre-fixe for years and finally got to right before the holidays with some super-swank friends. 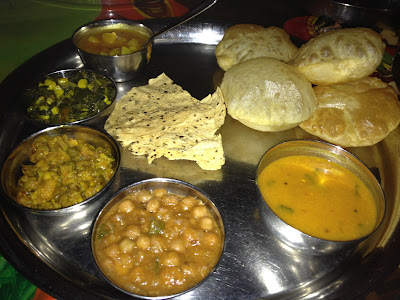 Everything about our experience was terrific. Pleasant and efficient waitstaff, gorgeous dining room, and delicious (and vegan-friendly) food; what more could you ask for? 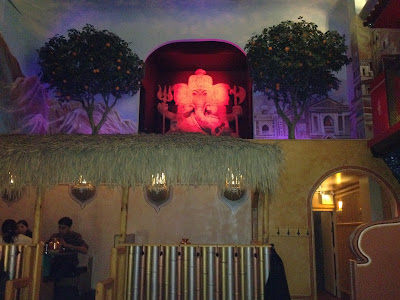 When you arrive, you are given a bowl of these appealing crunchy things.  They're like a cross between Wise onion rings and....something less salty and oniony.  Still, good- especially when dipped in the chutney. 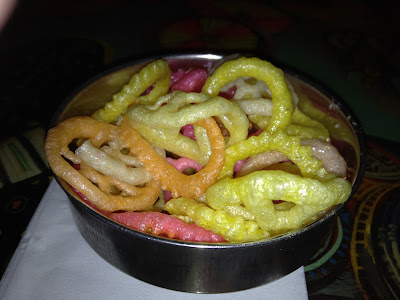 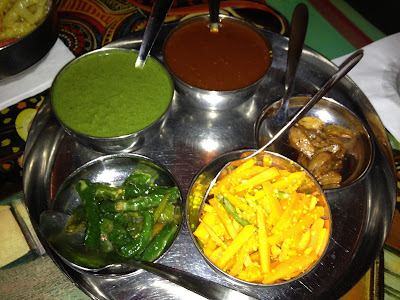 Water for the faint of palate (remember to ask for ice if you order soda; they serve Euro-style). 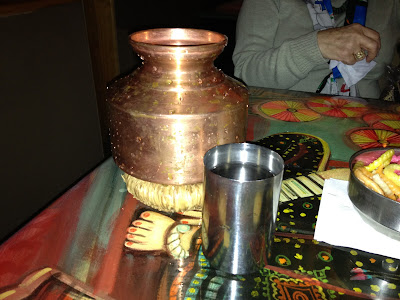 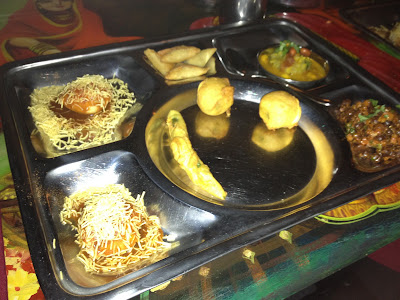 You have the option of ordering seconds of anything on your thali, but we all figured we'd better pace ourselves if this was only the beginning.

At this point the lovely waitress informed us that the appetizer had been of medium heat and we had a choice; our entrees could be the same, less, or more spicy.  I chose more.  Bring on the heat!

Good choice to pass up the appetizer seconds; this was the Entree Thali, clockwise from center:

And to accompany, Entree Complements: 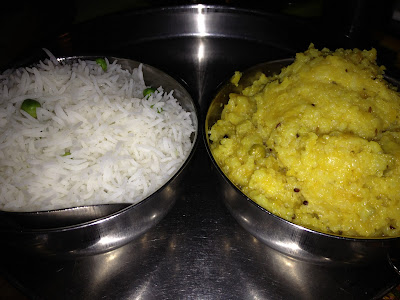 While the spice and flavors were a little more muted than I'm used to, everything was delicious and I felt extremely comfortable dining at such a vegan-friendly establishment.  So much so that I was able to forgive them for the vegan dessert option: Aam Rus: mango pulp- straight up, mango pulp!  To be polite I smelled it (ok, that wasn't polite), I tried it, I grimaced at it, and then I thrust away shared it.  I will note that everyone else at my table enjoyed.  As for me, if I want a mango I'll just eat one with a side of sweet Thai sticky rice thankyouverymuch. 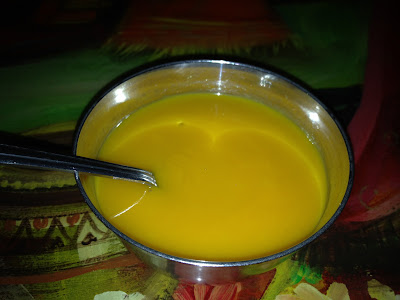 I left with a great feeling, anxious to return. 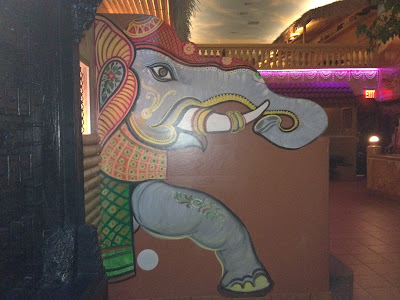 I really wanted to go back take VM, so my return visit was soon thereafter.  Unfortunately, it was immediately apparent that our waitress this time was disinterested and in an inexplicable hurry. It was early and the restaurant was more than half empty, so there was no reason for this.  She quickly snatched our menus because we "didn't need them", so we blindly ordered one vegan dinner and one vegetarian, with VM hoping it would mean there was some paneer in her future.

The Appetizer Thali was as good as I'd remembered, but two minutes into enjoying it the waitress was back to ask if we wanted more of anything.  How were we to know yet?

Mostly just to catch her off guard I did immediately ask for more Mirchi Bhajia and, to her credit, she brought it right out. 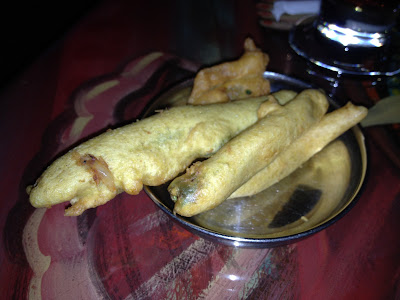 The only difference between VM's vegetarian plate and my vegan one was that she received Khaman, puffed cream of wheat flour cakes (that she didn't like), and her Sev Puri was drowning in yogurt (that she didn't like) instead of tamarind chutney like mine.  Since I had two, I gave one of my superior, vegan ones.

As will happen in waitstaff situations such as these, she had no sooner cleared our first plate that the Entree Thali was served (the restaurant was still only 1/3 full).  As the waitress rushed through the descriptions of the dishes' contents like a stewardess explaining the location of the emergency exits with that annoying two-fingered motion, she removed one of the selections from my dish- the Bhaji that I had so enjoyed on my previous visit.  "This contains dairy and should not be on there," she explained.  What!?  I was not sure who to believe as I generally want to believe nice people over not-so-nice people, but I had to err on the side of veganism and go without. 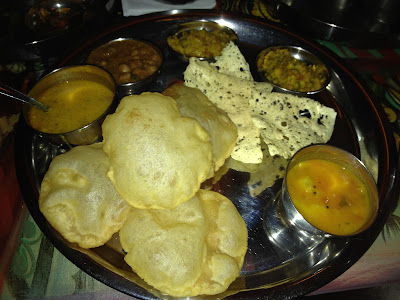 VM received the non-vegan plate, inclusive of the coveted Bhaji and the added bonus (not really) of Kheer: rice pudding with saffron and dried fruits.  She did not indulge. 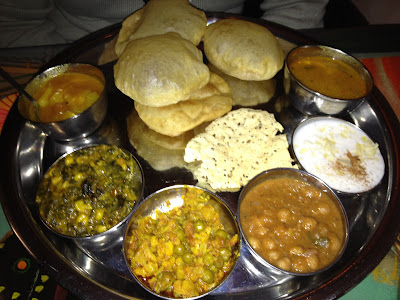 Because there was a non-vegan present, we received an additional Entree Complement: Kadhi: soup with yogurt and chickpea flour in authentic spices.  VM was so frightened by this milky substance that she did not even try it.  Note to vegetarians: at Vatan, non-vegan = yogurt, yogurt, and more yogurt. 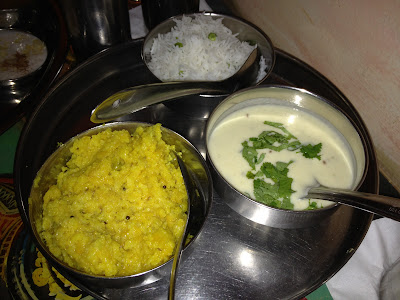 It was hard to enjoy the meal through the eyes of someone obviously disappointed after my initial, glowing review.  VM was disappointed and, needless to say, I was annoyed and disappointed.  After having hated the mango pulp on the previous visit, I already knew I wasn't having dessert.  I urged VM to order the homemade Indian ice cream if she liked, but when we found out it too was mango-flavored, she passed and we anti-climactically ended our meal in the now nearly empty restaurant- much to the delight of the waitress, who clearly had other things to do.

On the way out I noticed this fine fellow who I had missed seeing on my last visit; even he looked perplexed. 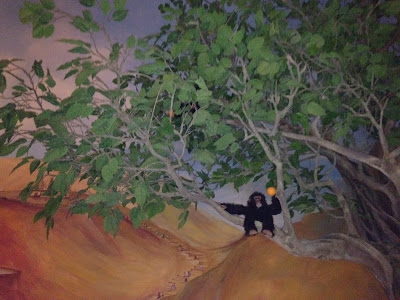 Between the vegan misinformation and the missing pleasantries and ceremony of the second visit, I'm not sure how quickly I will return.  VM is completely disinterested in doing so.  It is a shame, really, how one establishment can afford two such distinct experiences; it was almost as though I wasn't at the same place.
Posted by Abby Bean at 10:26 AM