Beyond the Terri Butterfinger Shake

I've long extolled the virtues of Terri's Butterfinger Shake, but I have a new Terri favorite to add to my repertoire (not necessarily at the same time): the chickpea tuna melt: "chickpea salad, Daiya cheddar, tomato, red onion, veganaise".

VM and I actually went in for shakes, but were so hungry that we decided to first share the melt.  Had we known how good it was going to be we would have each gotten our own! 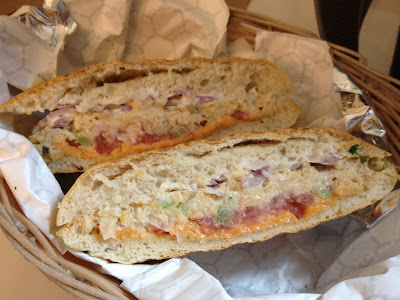 There's no sea taste to it, just fresh, creamy, crunchy, and perfectly proportioned ingredients.  I have to admit, it put my sandwich salads to shame.  Why has it never at least occurred to me to add cheese?  Thanks for showing me how it's done, Terri.

I would like to give major props- not only for this awesome sammie, but for calling Daiya...Daiya.  I'm tired of seeing it pretentiously referred to as "tapioca cheese" in higher priced restaurants that want to give the illusion that it's homemade.  Give credit where credit is due!

Now, I don't generally like to mix my sweets with my savories, but I'm only human. 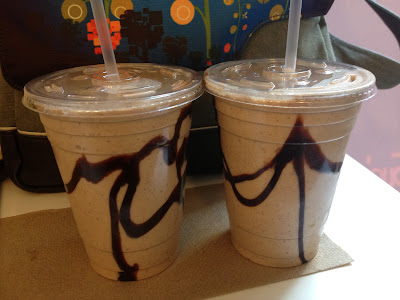 Dessert Butterfinger shake(s)!  They're not both mine, I swear.
Posted by Abby Bean at 6:34 AM

Email ThisBlogThis!Share to TwitterShare to FacebookShare to Pinterest
Labels: Terri