Because most of my lunches consisted of American cheese & mayo sandwiches Inexplicably, tuna salad was a favorite as a kid, as was egg salad, although it was served far less frequently.  What do these things have in common?  Lots of celery (if done right).  I've purchased store-bought tofu salads of all kinds: tofu, "chicken", "egg"...but none of them have been filled sufficiently with the best part of the salad: the crunchy celery.  I've always meant to make a chickpea version but, although I've amassed quite a few recipes (mashed, whole, etc.), I've never actually done so.  Then, with a brand new jar of Vegannaise in the fridge, I recalled a recipe from a Natural Kitchen Cooking School class that used tempeh instead of chickpeas: tempeh "tuna" salad.  Guess who happened to have a coupon for Lightlife?

If you want to make a sandwich JUST LIKE MINE (who wouldn't?), do the following: 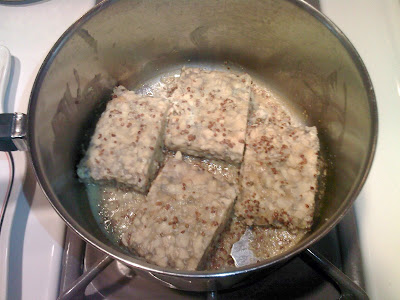 Then garnish it with parsley because you have it leftover from another recipe to make your photo look super swanky because you're fancy like that and enjoy.
Posted by Abby Bean at 6:47 AM