Remember, at Cafe Blossom, when I said it's nice to be made to feel like the staff is glad you're there?  That rarely happens at Peacefood Cafe.  But the baked goods are so scrumptious that, from time to time, I deal. 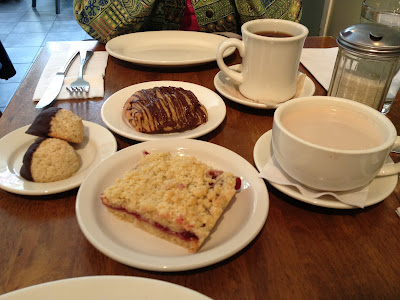 From the moment she laid eyes on us, it was obvious that the waitress was in a foul mood.  It was one of those situations where you wondered if it was something you'd said, even though you had yet to say anything.  Nothing like creating a pleasant brunch atmosphere; she managed to maintain her perpetual scowl throughout our entire interaction.  The only saving grace was that we were able to witness this same scowl in action with all of our fellow patrons, so at least she was consistent and it was obviously nothing personal.  That's something?

To start: black coffee and a Brazilian nut chai.  Glad I tried their chai again because I liked it much better this time.  Ok, I added sugar.  Sue me!!  We must have looked well-hydrated because even though we proceeded to eat our weight in baked goods, the scowler never asked us if we wanted a second beverage to wash them down. 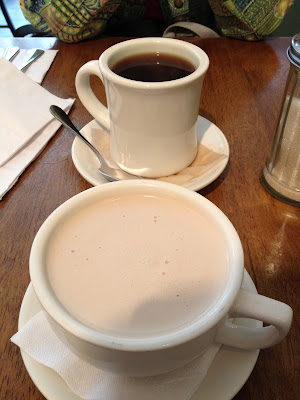 Of course, our favorite chocolate-covered macaroons.  They also sell them plain, although I'm not sure why. 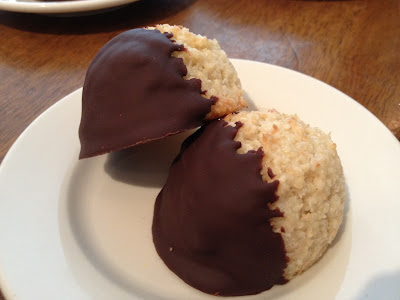 The raspberry crumb bar was a bit different than I remembered: no nuts in the crumbs and a much higher quantity of a seemingly sweeter filling.  Still good, just more artificial tasting. 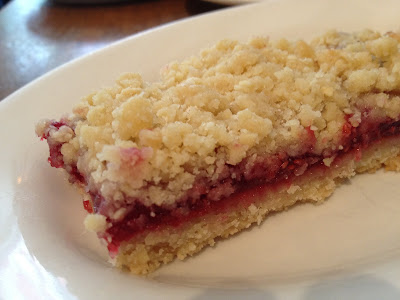 It's been suggested to me that this is really a pan au chocolat, but as far as I'm concerned it's simply the best vegan chocolate croissant I've ever had.  Be warned; this is very rich.  And, coming from me, that's saying something. 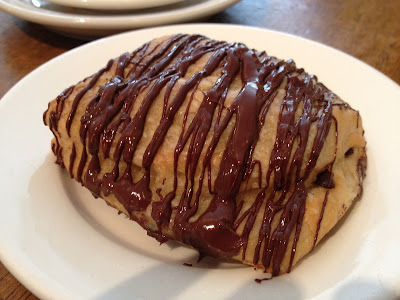 I have a love/hate relationship with Peacefood's chocolate chip cookie sandwiches.  Usually there are a ton of these delicious monsters in their refrigerated case, but on this day there was only one.  Because I've often seen the staff removing a platter of chocolate chip cookies from the case and returning, minutes later, with a platter of superior cookie sandwiches in its place, I asked if it was possible to request a fresh one.  There was an exorbitant amount of unnecessary resistance to this request from the scowler, but eventually the cookie sandwich creator herself kindly delivered this epic one to our table.  It was sort of our dessert dessert. 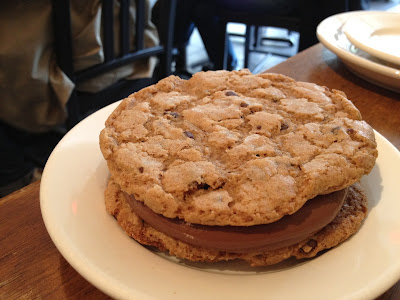 And then a Peacefood miracle happened.  I'm not sure if our waitress went on break or if she was just busy scowling at other people, but the skies unexpectedly cleared, the clouds parted, and a great beam of sunshine shone down upon us; the waitress (with the awesome eyeglasses) who brought our check and cleared our plates was great!  She smiled and chatted and... made us feel like she was glad we were there!  Hallelujah, Peacefood.  More of that, please. 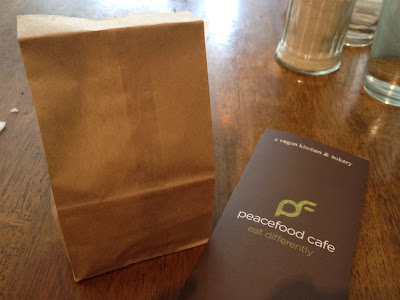 I would like to go on record as saying that I was saving my macaroon for last, and then I just couldn't do it. 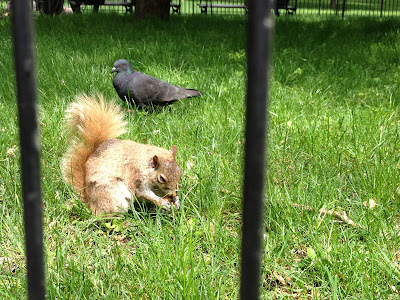 I wound up enjoying it later, in Margaret Mead Green, with VM- of all people, scowling at me.  She maintained that it wasn't out of jealousy; it was just her way of making sure I had the full Peacefood experience.
Posted by Abby Bean at 9:12 AM