It's no secret that VM and I are big fans of the grub at Peacefood, but their service often leaves a lot to be desired.  This time, though, enough was really enough.

VM ordered her standard black coffee.  For some inexplicable reason, at Peacefood they have a no refill policy on coffee.  Even thought it's extraordinarily chintzy, they do state it right on the menu, so there's nothing you can do about it.  Worse, though, is the fact that they've taken to serving it not in their generous, bulbous mugs, but instead in a proportionately miniature mug.  Tacky, Peacefood.

Since I'm not a fan of their Brazil nut chai, I decided to splurge and get the mocha breakfast smoothie: banana, cocoa, espresso, soy milk, agave.  Sounded delicious, but what a disappointment!  Forget smoothie, this should have been called warm mocha banana water.  What kind of a smoothie- with a banana in it, no less- is watery and warm?  Not amused, Peacefood. 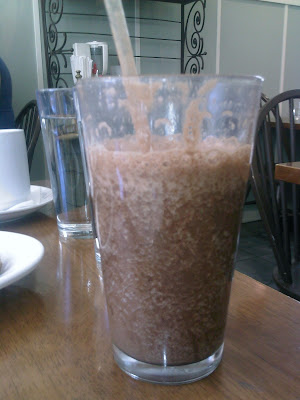 Thankfully, the rasberry crumb bar was fantastic.  Instead of straight crumbs, this was filled with all kinds of crunchy nuts (and crumbs) to complement the just-sweet-enough raspberry filling.  Two thumbs up, Peacefood.

As someone who buys them by the truckload a repeat fan of their chocolate chip cookie sandwich, I know that there is a difference between a fresh, crisp one:

and a mushy one that has been sitting in a refrigerator for 24 hours or more:

The reason I know this is because I once bought an extra cookie sandwich for the next day and after only one night of being refrigerated it was a soggy mess.  But something getting soggy in your own fridge is one thing, receiving a soggified one at a restaurant who is passing it off as fresh is quite another.  When we explained our disappointment to the waitress she didn't hesitate to take it away and bring us something else.  However, she also took it upon herself to put it back in the case for sale.  Can you say un-hygienic?  Even if she didn't want to take my word that the cookie sandwich was stale, I obviously touched it in order to confirm; how can you turn around and sell it to someone else?  Unacceptable, Peacefood.

In the place of the mushified cookie sandwiches we wound up eating the magic cookies, which were not as good as last time we'd had them, and the chocolate covered macaroons, which were thankfully as good as ever.

Overall, it's hard to reconcile the overall tackiness of this experience with the couple of tasty bites: especially since the good far outnumbered and outweighed the bad.  We have given Peacefood a good many chances to get their act together and it just hasn't happened; we probably won't be returning any time soon.  This is unfortunate, and I hope Peacefood improves.