VM and I are craft fair mongers from way back (think independent artists, not dried flowers in baskets) and we especially enjoy the Grand Central Holiday Fair and The Holiday Shops at Bryant Park (you can keep up with the Markets of New York all year round) with a Hangawi chaser. 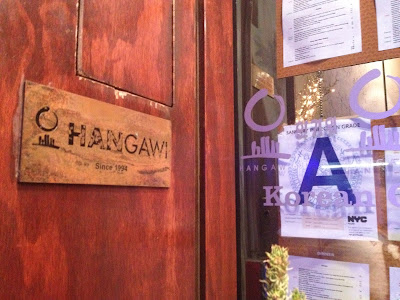 We don't venture to the tourist part of town very often, but because of these fests we can't help but to visit around the holidays.  We started our day at Dean and DeLuca for coffee; but, being the loyalists that we are, we smuggled in vegan contraband in the form of Vegan Treats cowboy cookies.  Note: under intense questioning, the gentleman at Dean and DeLuca swore that there were no animal products in a soy, vanilla latte. 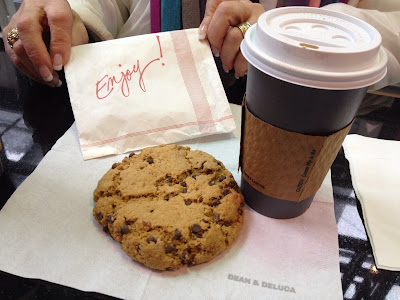 It was a particularly rainy day, so we then ducked into the free Lion King exhibit on 6th Avenue, Inside the Lion King.  There were plenty of people offering insight into how the intricate costumes worked and it was cool to see them up close since they were the only thing we liked about the show when we saw it years ago.  Yes; my family members and I are the only people in the universe who did not like The Lion King.  We can't help it; the opening scene was fantastic and the rest of the show was a letdown.  Don't judge us.  Unrelated: a day later I tried to text VM a pic of her with this elephant and I inadvertantly mis-dialed (I know; so old-school of me).  Would you believe a conversation ensued?  The mistaken recipient actually responded, "Who is that?" to which I had to reply, "Sorry; mis-dial," to which he responded, "Ok."  Really?  You receive an unusual pic obviously sent in error and you can't just let it go?  Back in the day when film had to be developed I was mistakenly returned an envelope of abhorrent trophy hunting shots that I was able to exchange for the correct roll with less communication. 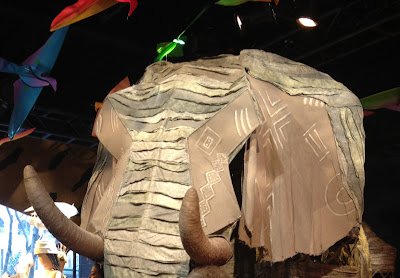 Next up, Bryant Park.  I was disappointed by how many out-of-place vendors were represented at this holiday market; I even heard a tourist lament that some were selling "the same crap you can get on the street" and he was right.  These markets are intended to showcase local shops and artists; iPhone cases, black umbrellas, and mass-produced winter hats do not a market make.  But, there were also some in-spirit venders to be discovered.  I chose a print by Ilia Pasymanski, and, later, a Turkish lamp that I'd been stalking (I'll spare you the drama, but take it from me: never assume that all Turkish lamps are sized the same). 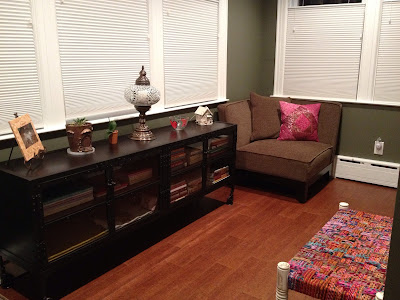 I've been shopping at the Animated Closet for years: they sell cotton clothes and accessories made of man-made materials.  While I was looking at the gloves, one of the salespeople (possibly the owner) suggested that I look at a bracelet that she thought matched my pocketbook.  The bracelet looked like leather, so I asked; you never know.  When she confirmed, I said simply, "No, thank you," to which she replied, "Oh, your bag's not leather?"  When I told her that it wasn't and that I don't wear animal products, she promptly and cheerily replied- in all seriousness, "Oh! Well these bracelets are made from cows who died from natural causes."  I took a deep breath and, in slow motion, turned in her direction.  Before I could open my mouth, VM warned her, "Don't go there," but she couldn't control herself from further spewing dangerous naivete, "No, really!  They're made from cows on a farm in Thailand that are milked and treated really well."  I won't bore you with the conversation that ensued, but suffice it to say: we have a lot of work to do, vegans!  For any non-vegans reading, please don't delude yourself; leather is a byproduct of cruel industries that you are a part of if you consume, wear, or use animal products in any way.

We'd just arrived at Grand Central Station when a young girl- probably about 13, approached VM with the question, "Excuse me, but are you Jewish?" Without hesitation I ran about 8 feet away for fear of being in the line of fire when VM laced into the girl for her uncouth forwardness.  I waited for it: 5,4,3,2.... and then VM's expression softened and she calmly replied, "Why yes; I am." Without hesitation, the young woman handed her a menorah and wished her a Happy Hanukkah.  Indeed. 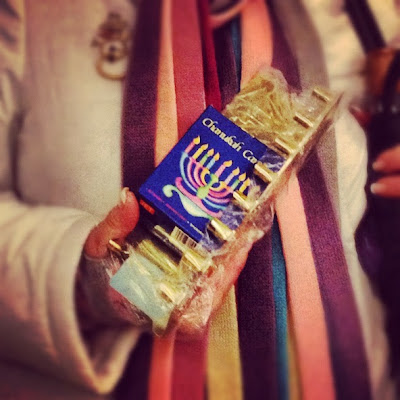 For dinner, we headed over the Hangawi.  I'm sorry to report that while the atmosphere is as calming as ever, the service and ceremony that has, in the past, truly made dinner at Hangawi a ritualistic experience is all but gone.  Luckily, the food still reigns supreme (and the serene lighting still prevents the photos from being anything but informative). 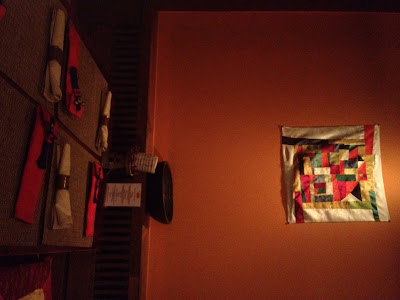 Plum juice for me: 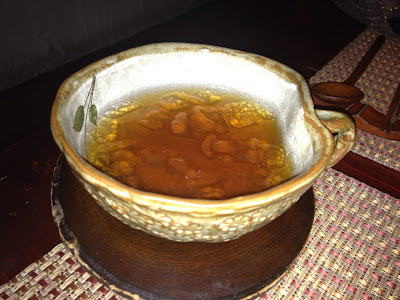 White sangria for VM (this was more juice than wine: with pineapples, blueberries, and possibly mango): 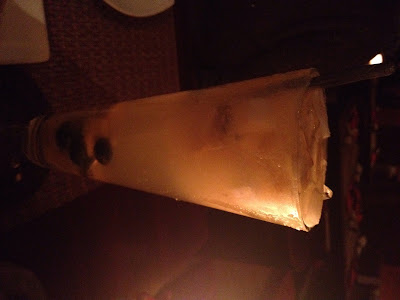 We started out with an order of the fritters galore: crispy batter fried sweet potato, todok, doraji, taro, beet, and kabocha. 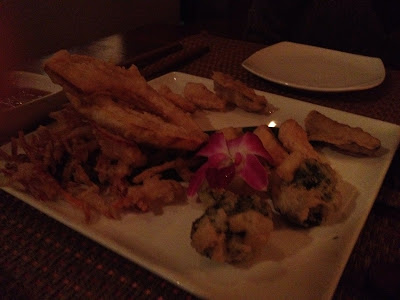 And the vermicelli delight: Korean sweet potato noodles with assorted vegetables.  The blur is actually steam. 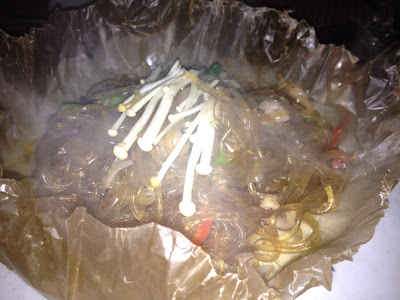 For dinner we shared the crispy mushrooms in sweet and sour sauce: 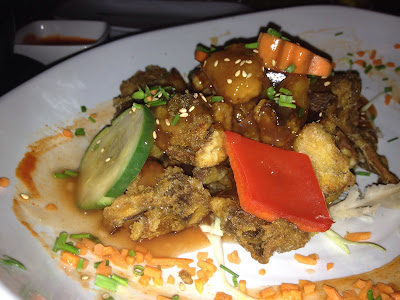 And the vegetarian stone bowl rice: assortment of vegetables over rice served in hot stone bowl with hot chili paste on the side (we've been through all of the stone bowls and can never remember which is our favorite). 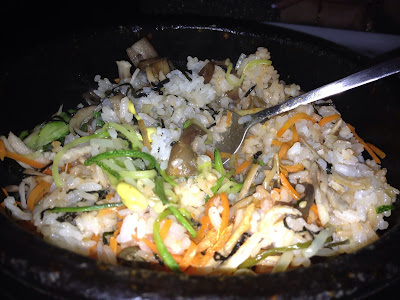 The food was delicious and everything was enjoyed.  But, as I said, while Hangawi is a longtime favorite- it's definitely missing something of late. 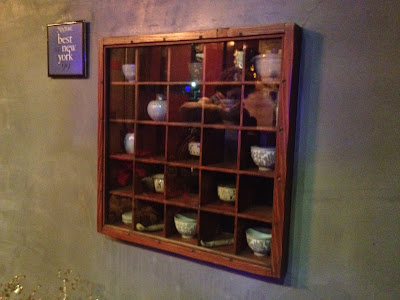 The serving ceremony that has always made the dining experience so special has been all but discontinued,  and what remains is performed like a chore.  No one asked if we were enjoying everything or even if we needed anything, and the waitstaff was impatient if you happened to be getting up from your seat if they were passing (it's hard not to be).  Worst: they just exhibited general malaise about the theme of the restaurant, which is what makes it so special.  I hope this was just an off-night and the service returns to its former glory so that it may catch up with the food and atmosphere.

But, in order to leave you on a note of Holiday cheer... 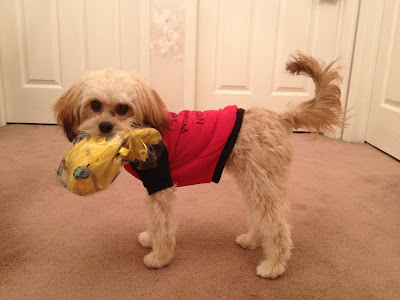 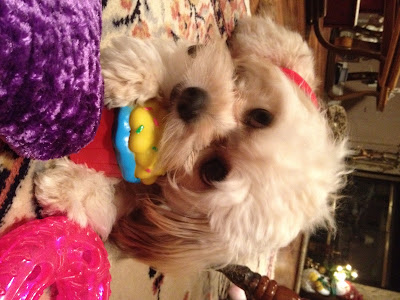 Which she managed to destroy in under 4 minutes. 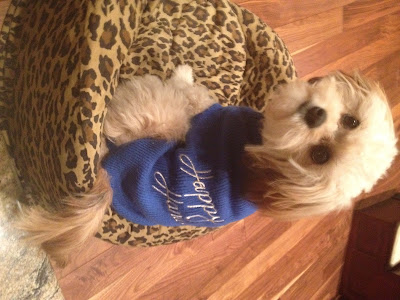 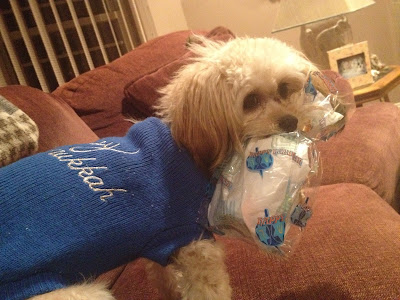