The Consistently Extraordinary Experience of Hangawi

We hadn't been to Hangawi in some time and this visit was unplanned, as we found ourselves in the area unexpectedly.  Noticing some things on the menu that had escaped our attention previously, we sacrificed some old favorites in order to find some new ones.

VM started off with a white wine and I, the designated driver, chose the mysterious plum juice: mysterious mainly because I don't like plums.  When it was served in this gorgeous mug I didn't really care what it tasted like, but was elated to find that it was extra delicious.  I've had their soju mojito and their takara plum wine, but now I have an official "drink" at Hangawi. 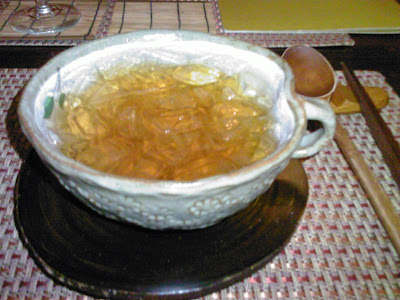 We started off with the spicy kimchi salad.  If you love the complimentary spicy kimchi that is served with your meal at Hangawi, then this is undoubtedly the salad for you.  A giant mound of the piquant, marinated cabbage atop lettuce greens, it also contained a few slices of apple (all yours, VM), and cucumber (all mine).  Topped with crunchy taro sticks, this was a terrific start to our feast 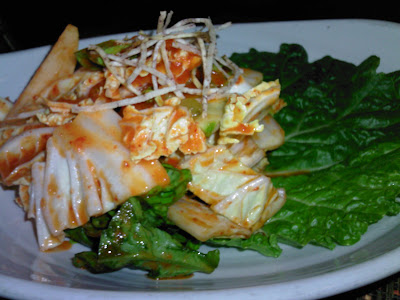 You may have noticed that we like fried foods: samosas, onion rings, tempura, tempura, fries, fries, fries; you get the picture.  So, we couldn't resist the fritters galore.  Mainly root vegetables and broccoli, this was served with a sweet and spicy dipping sauce and was actually a much larger portion than appears below. 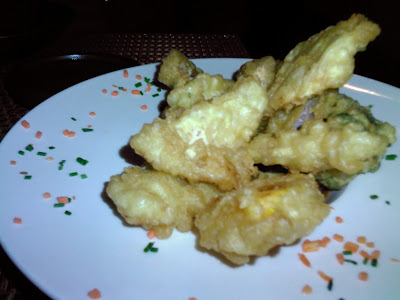 At this point I was so freezing from my ice-filled plum juice (so good!) that I ordered the vegetarian dumpling soup.  We're not really big fans of soup in general, but both VM and I agreed that this soup was fantastic.  Tasty broth filled with all kinds of crisp veggies (carrots, mushrooms, leeks, celery, peapods, etc.), as well as two giant dumplings bursting with yummy ingredients; I highly recommend- especially now that the chill has settled in. 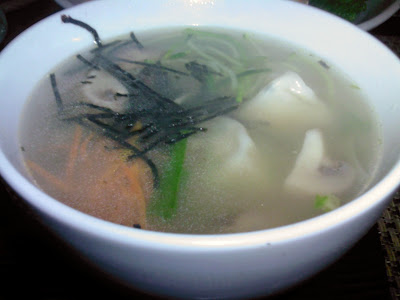 Not to worry; we also revisited some favorites.  Both of us independently chose the crispy mushrooms in sweet and sour sauce, so that was a definite.  Delicious on their own, the mushrooms and sauce are further accented by the sweet red and green peppers, zucchini slices, and cabbage shreds. 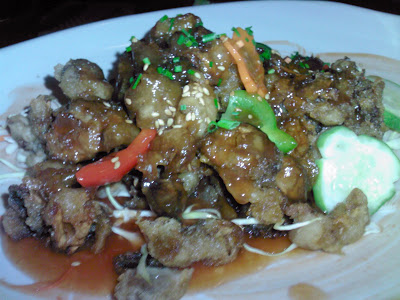 After the accidental bibimbop incident at Franchia, for which I take full responsibility, I redeemed myself by shouting a preventative "stone bowl rice!" at VM as though she was unfamiliar with my language.  We then calmly discussed, compared, and ultimately chose one we had never tried: the waiter's recommendation of the avocado stone bowl rice.  Unlike the vegetarian stone bowl rice which comes with spicy sauce, this one comes with sweet miso; I think I liked this one even better! 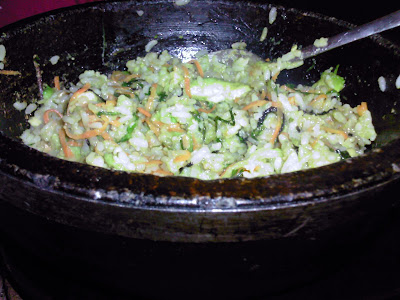 Apologies for the mostly eaten kimchi you see below, but it comes with a tip.  As we both prefer the spicy version to the regular, VM masterminded a genius plan to soak the plain cabbage in the excess spicy juice, so we essentially wound up with two servings of spicy: yum. 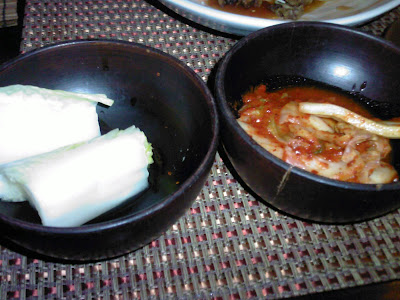 In the end, there was an adorable surprise waiting for me when I finished my scrumptious juice.  Since Hangawi sells teacups I asked if my awesome mug was for sale.  The waiter kindly checked, but found that it was not.  I told him that it would fit in my purse without a problem, but he was quick to draw my attention to the security cameras.  I kid! 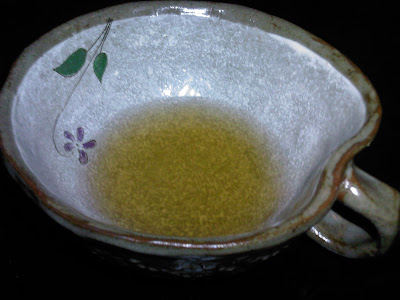 One note: Be prepared that when you enter Hangawi you will be enveloped by a serene atmosphere that makes you immediately forget the street that exists just on the other side of the door.  The dim lighting, pleasant music, and below sea-level diners all work together to create a calming environment...that is quickly interrupted by an unintentionally abrupt instruction to remove your shoes. The shoe-less-ness is actually an added element of relaxation at Hangawi, but the stern command could definitely be softened.  Don't let it deter you from proceeding inside; accept it as part of the whole experience and be assured that the rest of your meal will be calm and enjoyable: made even moreso by the pleasant, friendly, and efficient waitstaff.
Posted by Abby Bean at 7:00 AM

Email ThisBlogThis!Share to TwitterShare to FacebookShare to Pinterest
Labels: Hangawi