One recent* Saturday was a ridiculously busy one; luckily I have a very good friend who can plan and execute with the best of them! 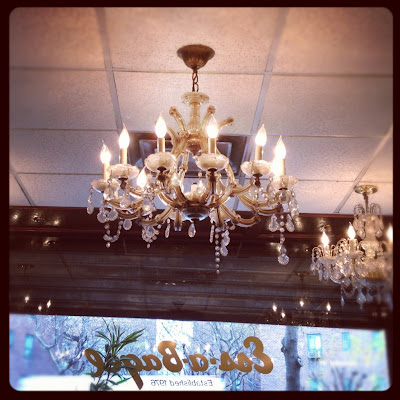 We started off at Ess-A-Bagel: my first time there! 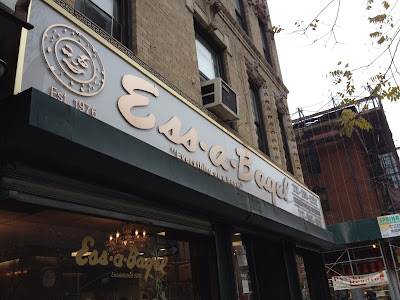 They had a number of different vegan cream cheeses (Tofutti?): scallion, raisin walnut, plain, and veggie. 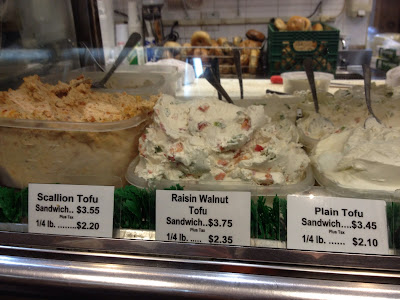 And they make their giant bagels fresh right behind the case (ours was served warm).  My friend- who is vastly more familiar with the shop, told me that they boldly have no toasters on premises.  Judging from the constant line, I can't imagine they'd ever need them. 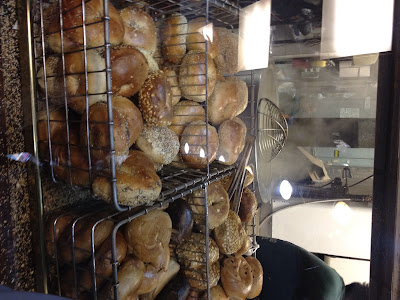 Bagel flavors:
﻿
﻿
We went with whole wheat everything... 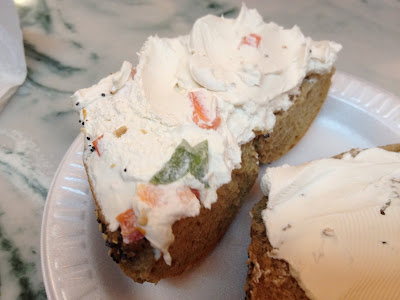 Then we visited the Union Square Farmer's and Holiday Markets. 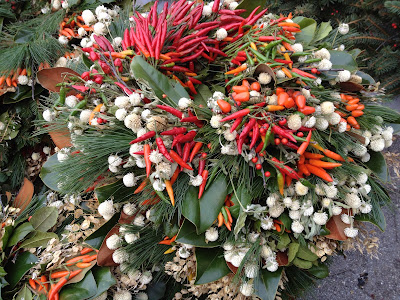 After that we grabbed another friend and headed over to Beyond Sushi, where we wanted to try their new(ish) bowls.

Since it was so early, they only had the coconut curry soup base as an option; the miso and spicy broth were still being made.  Carrots, baked tofu, asparagus, roasted romain hearts (YUM), and choice of noodes.

With udon and cilantro:


With soba, hold the cilantro:


Another great juice; this one is my favorite so far: freshly squeezed strawberry, kiwi, yuzu juice.  As anticipated, I craved this again during a recent Shop-up and bee-lined to Beyond Sushi on the way back from Brooklyn. 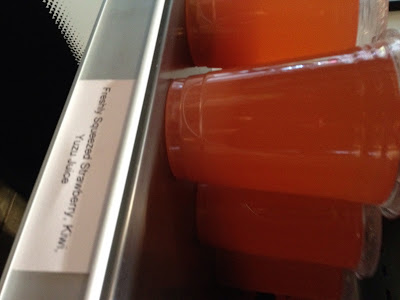 I also got some rolls as take-out to share with VM (for the next day; I'm not a bottomless pit). 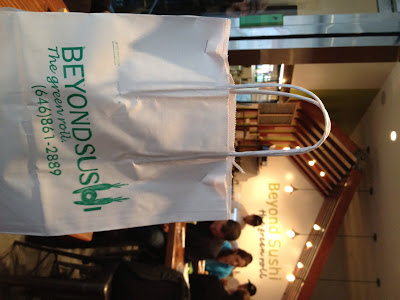 Everything was packed neatly; even the sauce came in squeezable containers for home-adornment. 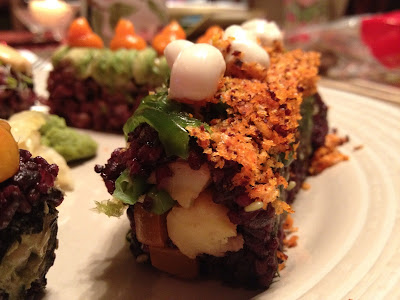 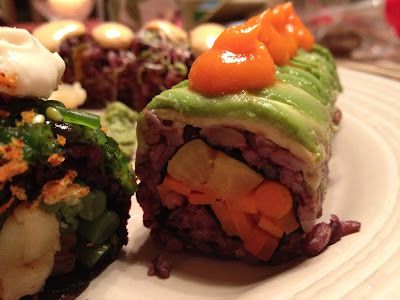 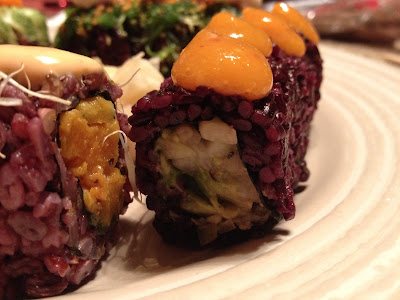 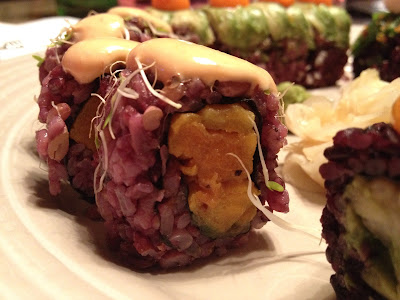 It wasn't plated as nicely as at the restaurant, but I did okay for a first-timer. 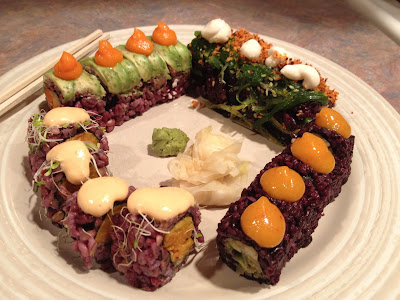 Later, on the way to the Bust Holiday Craftacular, two of us picked up an eclair (yes, you heard me) from Viva.  A friend of a friend had tried one and reported back on the authenticity; we had to give it a try. 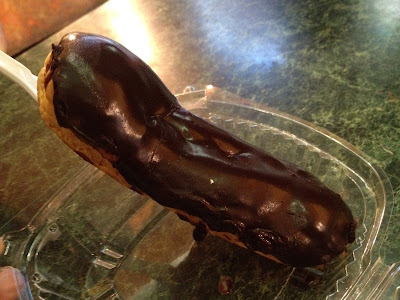 It looked, smelled, and tasted like a traditional eclair; there was just one problem: the cream was almost completely frozen!  We guessed that they'd been delivered frozen and hadn't adequately defrosted yet- either that or Viva needs to turn up the temperature in their fridge.  Also not sure exactly whose eclair it was; Viva's treats are usually from Vegan Treats, but this wasn't marked as such (and I do consider myself a bit of an aficianado). 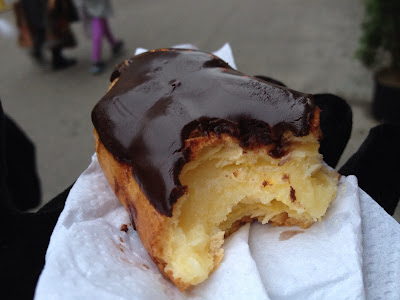 After that we went to another friend's birthday celebration, where the outpouring of warmth for the newly out-of-city transplant was palpable (had some AWESOME trail mix there too) and, finally, ended the day at Peacefood. 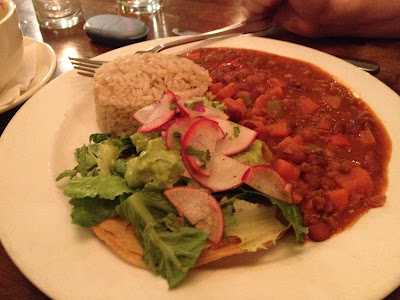 I had a savory cheddar and roasted veggie biscuit that was hugely disappointing; they're usually great, but this one tasted as though it hadn't been thoroughly cooked; wah. 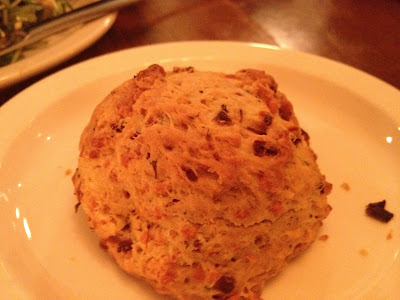 And two of us had the Asian greens salad, "seasonal baby Asian vegetables, mixed sprouts, shredded carrots, tomatoes, marinated and baked tempeh, and ground peanuts in a garlic, ginger, cilantro [you can't taste it], ponsu, and sesame dressing." 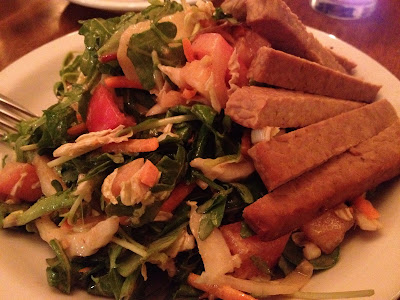 You might not believe this, but the service was the best I've ever experienced at Peacefood- by a mile.  The server was friendly, efficient, and actually had personality; thanks, Sam.

Finally, inspired by this NY story from foodfeud, I thought I'd share mine.  When I was attempting to park in the East Village on this day, it wasn't going well.  Finally I spied a spot, but there was a giant, fluorescent orange, pick-up truck parked significantly over the line.  I couldn't pass up the space, so I tentatively pulled in and took a second to decide what to do.  Then I noticed that Mr. Fluorescent-Orange-Pick-Up-Truck was actually standing right behind his truck!  I backed up a bit, rolled down my window, and asked if everything was ok (he was fiddling with something on the truck).  When he said yes, I informed him that he was parked so far over the line that he would have to hit me with his door in order to get into his car.  He told me he was leaving, so I offered to give him time to get in before pulling fully into my space.  "That's ok; I'll just get in from the passenger side: go ahead."  So, I pulled in as far to the opposite side as possible, and jumped out to tell him he should be okay.  True to his word, he was already climbing in via his passenger door.  Thanks for the chivalry, sir.
Posted by Abby Bean at 6:51 AM