The only excuse I have for not running to Viva as soon as I heard they were using Daiya is that whenever I pass I'm usually on my way to Lula's, and Lula's trumps all.  On this day, I had Lula's first *wink*. 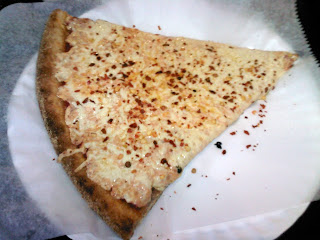 Viva is not entirely vegan, but they have a ridiculous variety of vegan pies available by the slice at any given time. Oddly, the only one that seems to have Daiya is the plain cheese pie, but that's good enough for me.  The other vegan options are inventive, veggie-loaded versions, but they are in need of some Daiya as well!  So too the very sad marinara-only vegan Sicilian slices they offer...but a customized Daiya-smothered, Sicilian pie loaded with veggies?  My goodness, I am getting ahead of myself; next time.

Apologies for the single, half-assed photo; it is in no way a reflection on the gastronomic success of the visit.  The fact is, this is the first pizzeria slice I've had handed to me for immediate consumption, piping hot from the pizza oven (!) in over a decade.  I asked for it to be heated "extra hot" and I received it as such, looking so authentically cheesy and wholly fantastic that I was barely able to contain myself in order to snap a shot at all.  Then I dug in and didn't stop till the huge slice (only $3.50) was all gone.  People, I even folded my slice!  So ridiculously good; Viva is the only place that I've seen be as generous with the cheese as I would be making my own pizza, or anything else.  The crust is whole wheat spelt, which is a little different, but the cheese is the star here: so it doesn't matter.

Don't go to Viva looking for a cozy atmosphere or friendly, pizzeria banter; there is none of that.  But do go for this awesome slice of cheesy goodness like only NY can deliver.
Posted by Abby Bean at 10:44 AM