I think I'm the only person not in love with the Field Roast Chao cheese and that's....okay 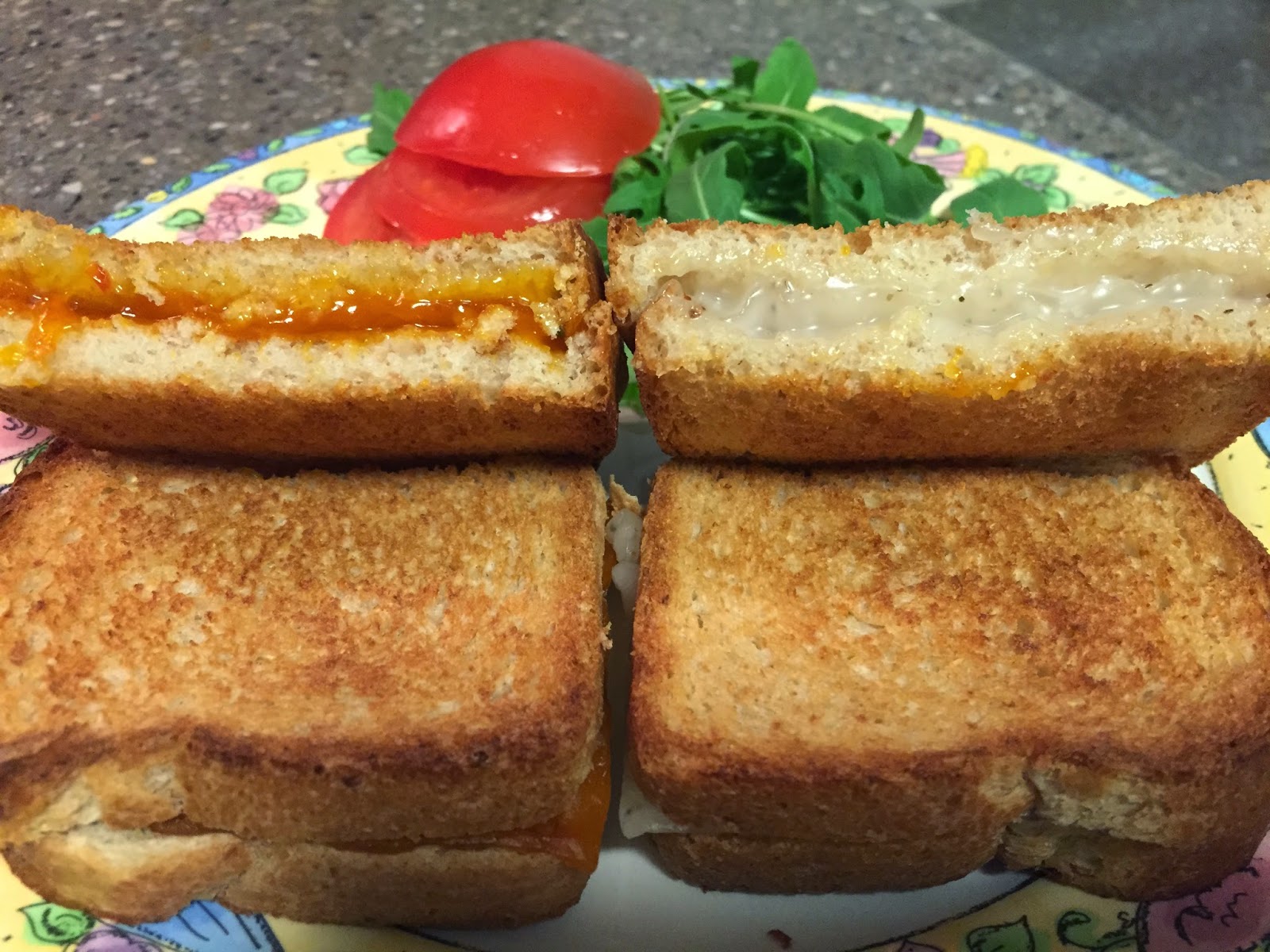 As you probably already know, Field Roast- purveyors of my favorite franks and my annual Thanksgiving roast, makes a new sliced cheese called chao. Sliced vegan cheese is a game changer!! I wanted to love it and was thrilled when I found it. 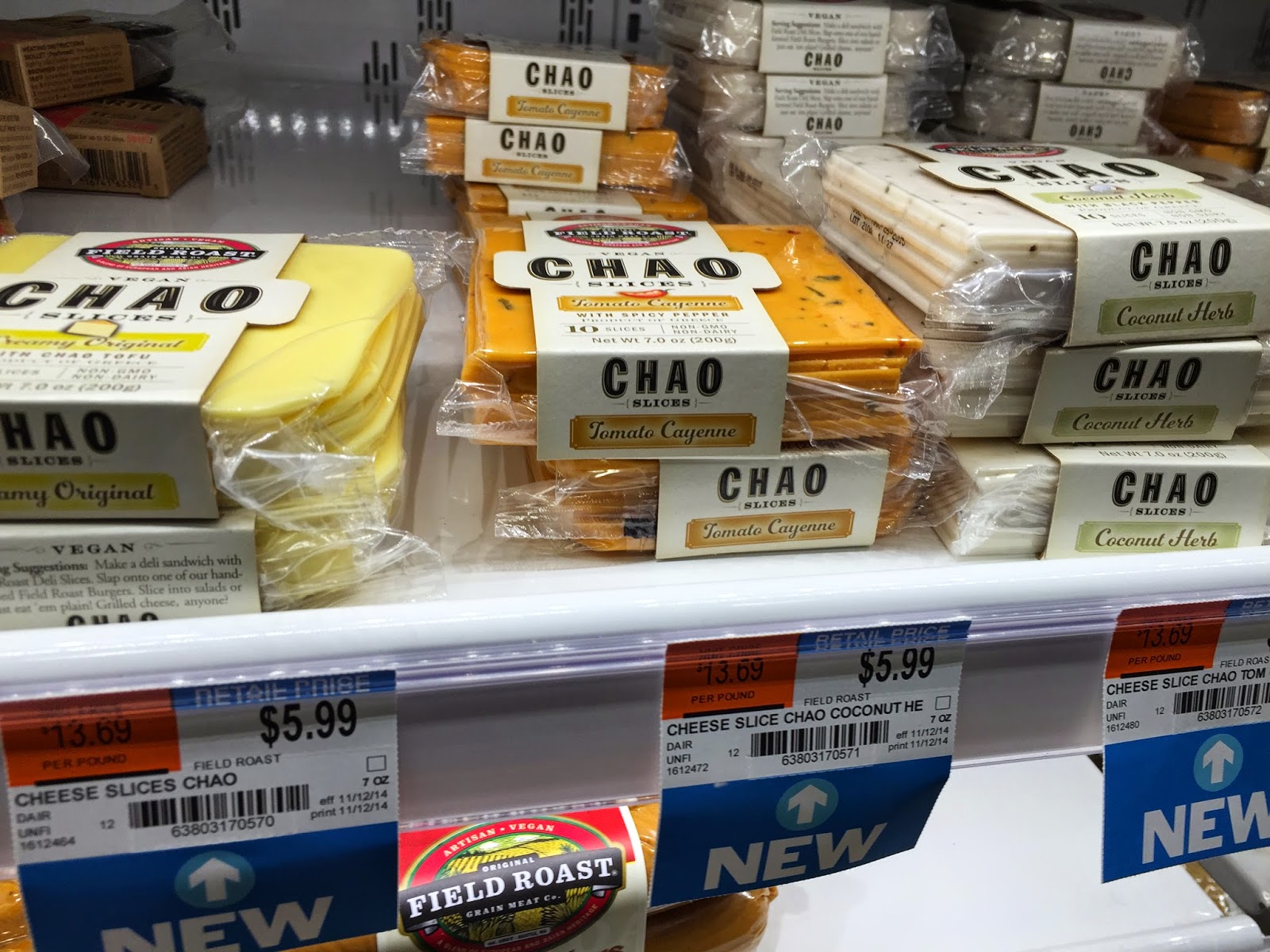 Because I wanted to present the illusion of self-control, I purchased only two of the three available cheeses: coconut herb with black pepper and tomato cayenne with spicy peppers, leaving the comparatively boring sounding creamy original on the shelf. 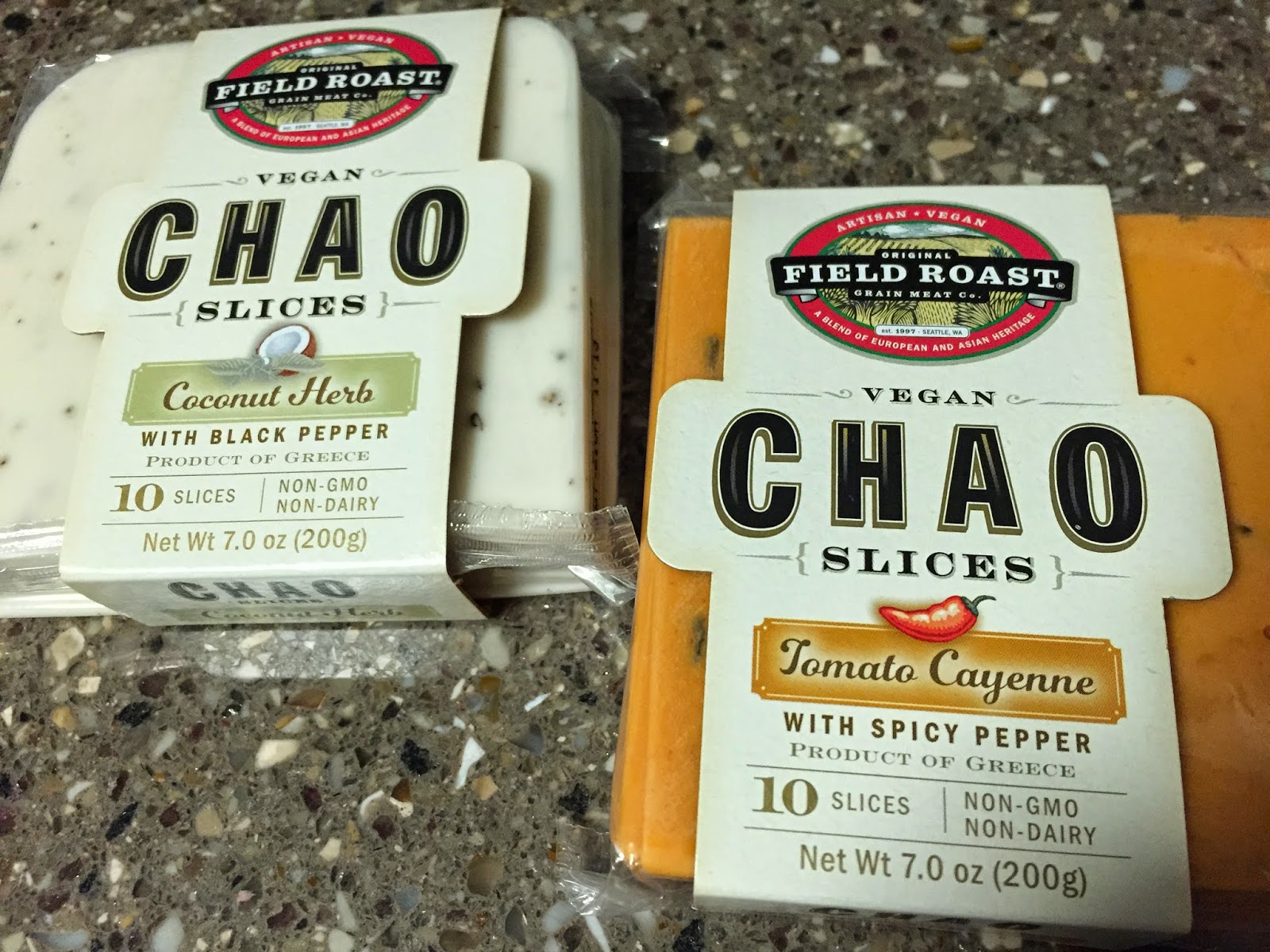 The slices were thicker than what I remember of the old, non-vegan, American cheese slices of my childhood. They also weren't individually wrapped- probably because they needn't be. Unlike said American cheese, chao slices aren't sweaty and damp. And remember how non-vegan cheese used to mysteriously adhere to surfaces...like plates? Obviously, I still have unresolved issues on the subject; it's because I find non-vegan cheese repulsive for a multitude of reasons: cruelty and grossness highest on the scale. But, in direct contrast, the chao slices are very appealing! 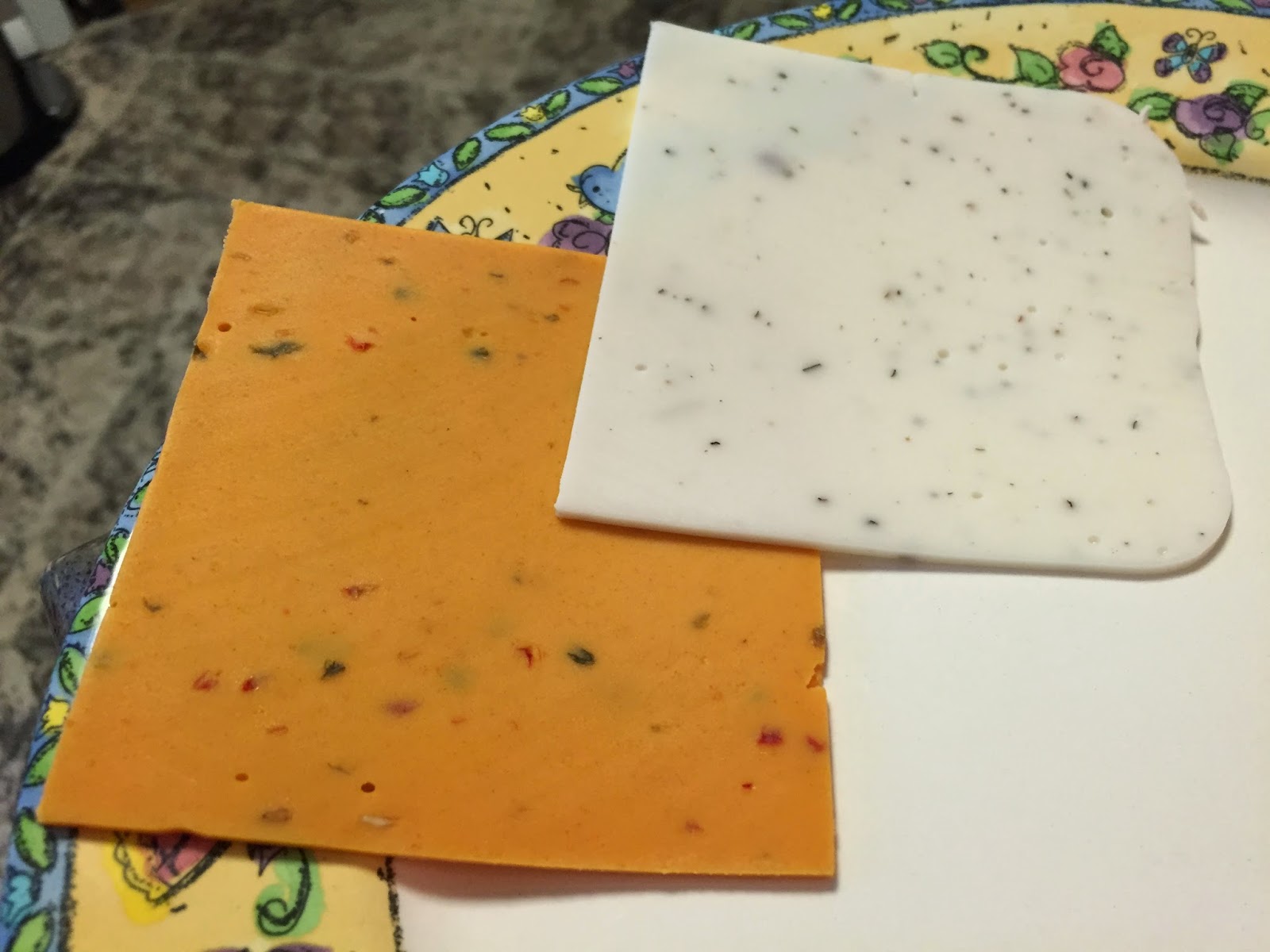 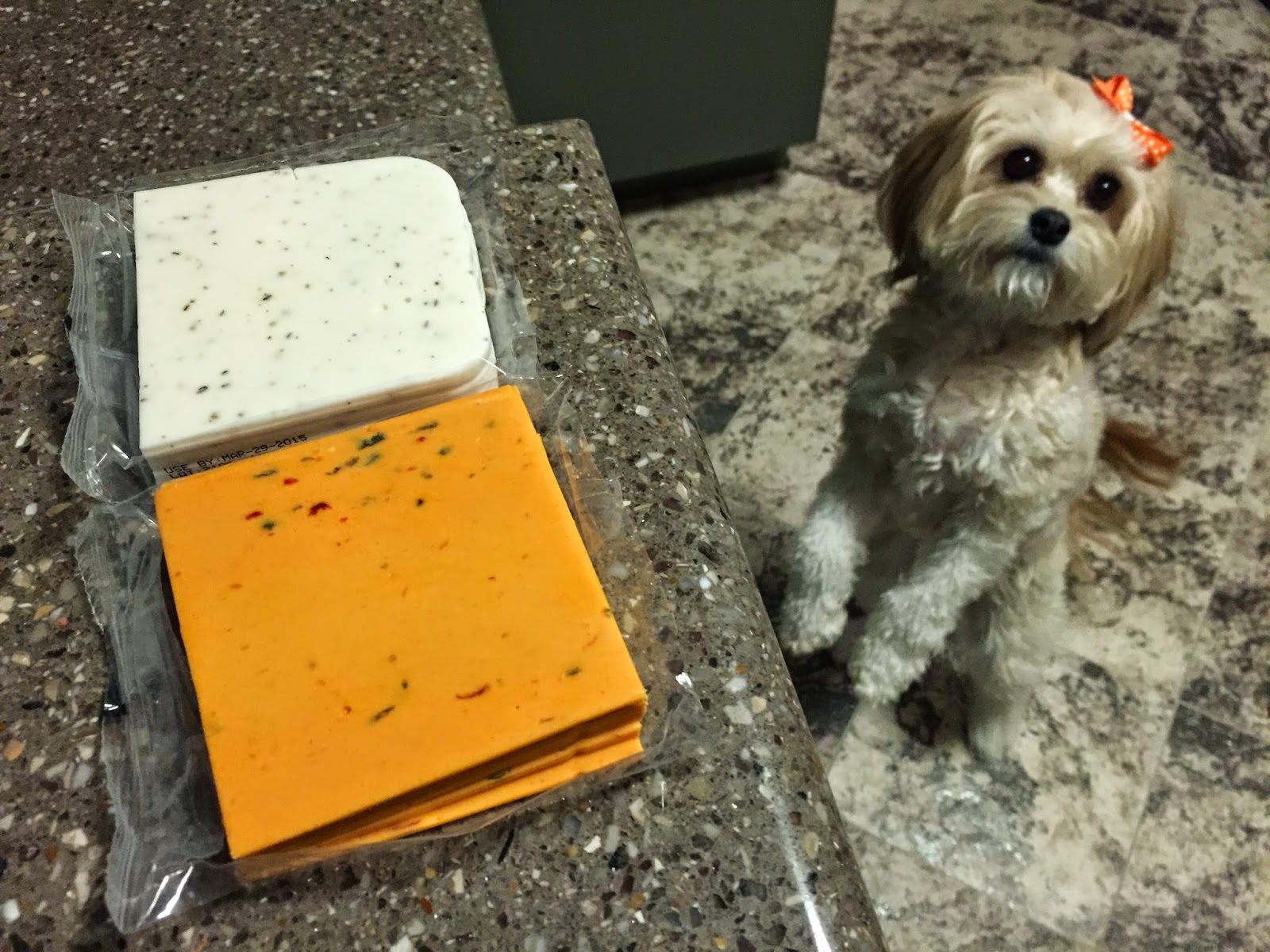 We figured it was our duty to taste it plain; 89 went first and she was all about the tomato cayenne! Contrarily, she was not a fan of the coconut herb. She kind of rolled it around in her mouth and then spit it out, so I decided to forgo that portion of my taste-test. 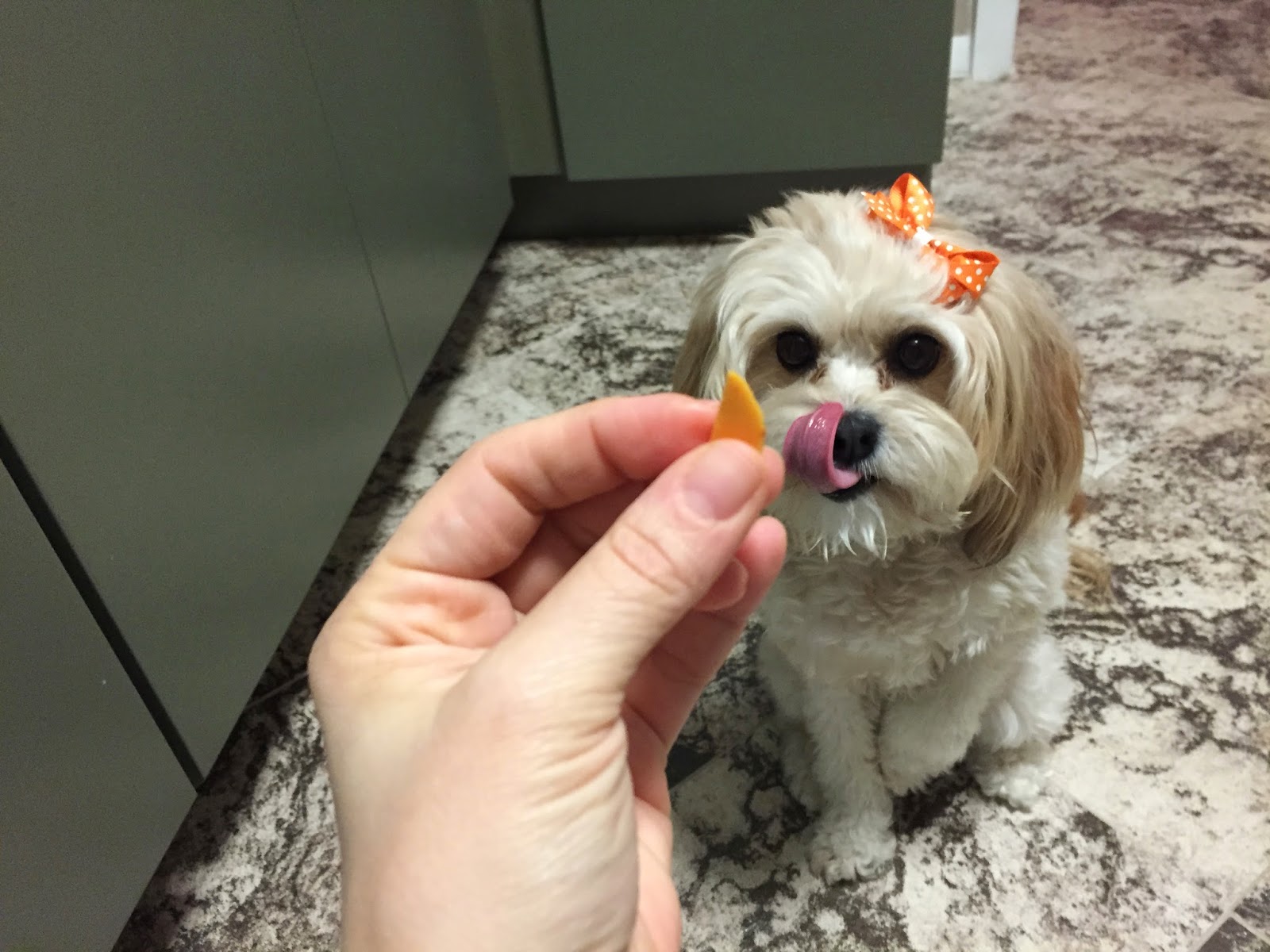 I evenly prepared the simple components in anticipation of grilled cheese perfection- the ultimate cheese test. 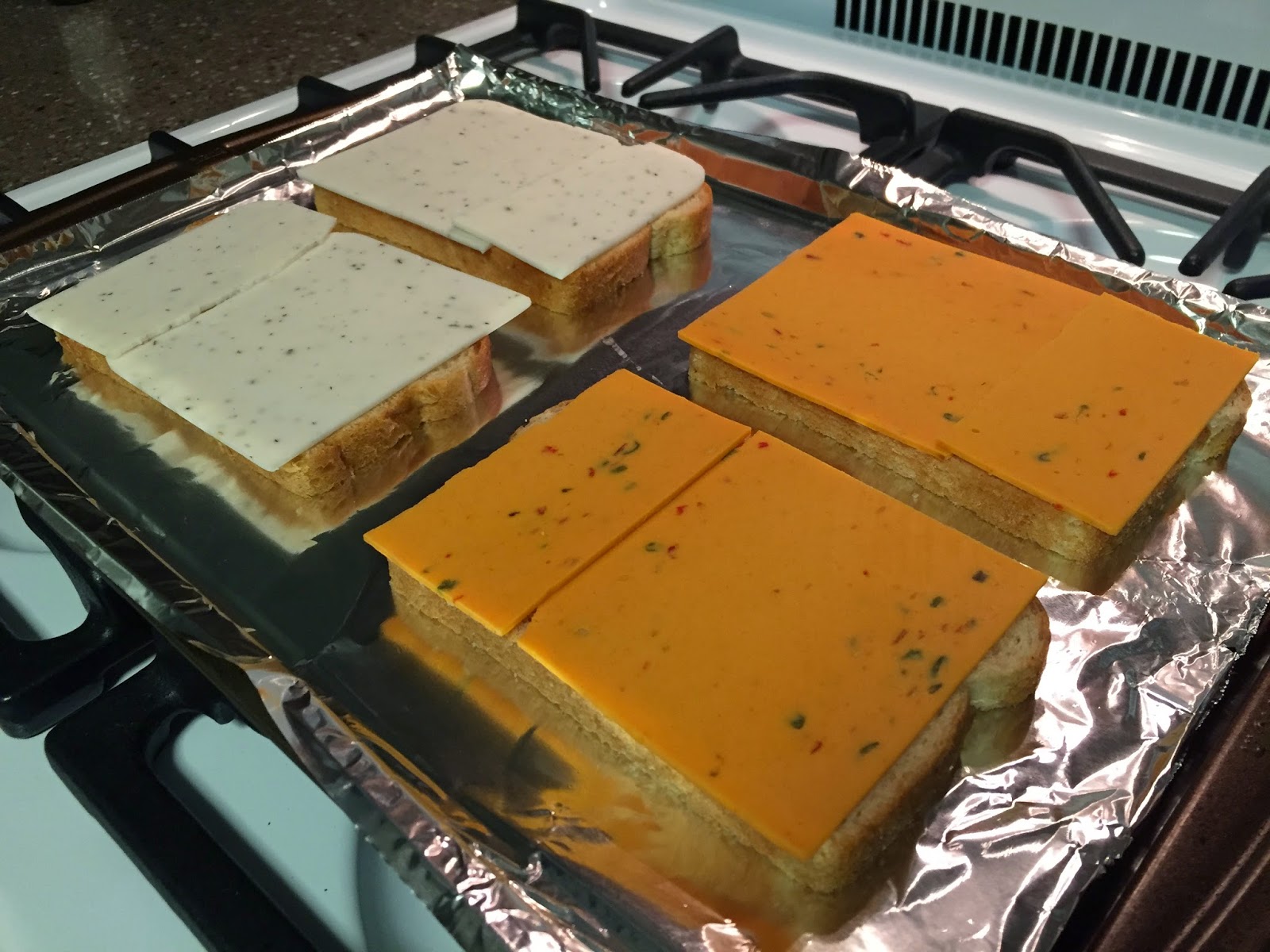 I heated it in a 400 degree oven for 10 minutes: my usual grilled cheese m.o. 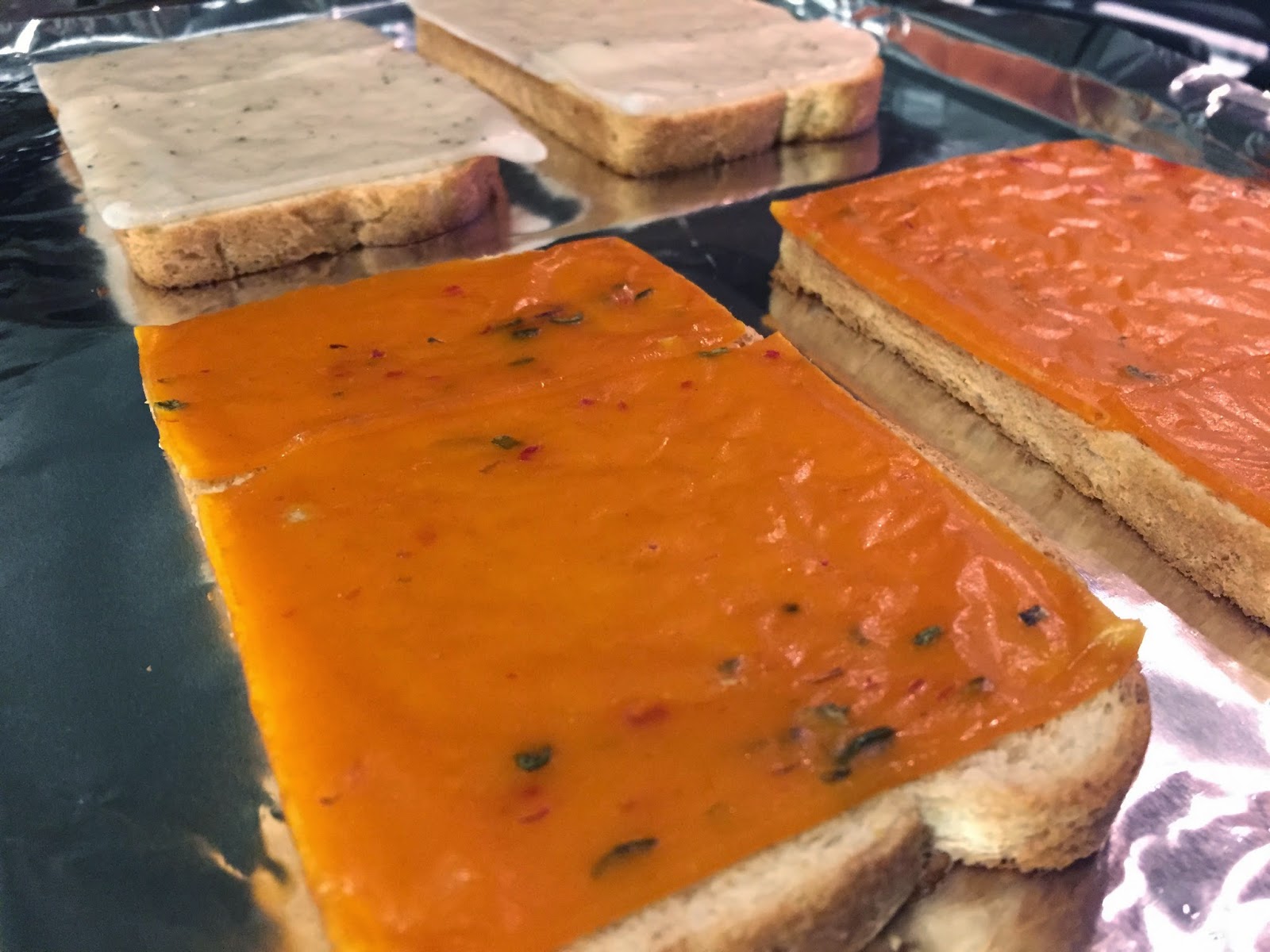 I let it sit for a minute or two, then assembled the sandwiches and let them sit for another minute or two so that the two sides would synthesize appropriately. The smell was extremely appetizing and I couldn't wait to dig in. I left my arugula and sliced tomato off to the side because I wanted my first taste to be all cheese. 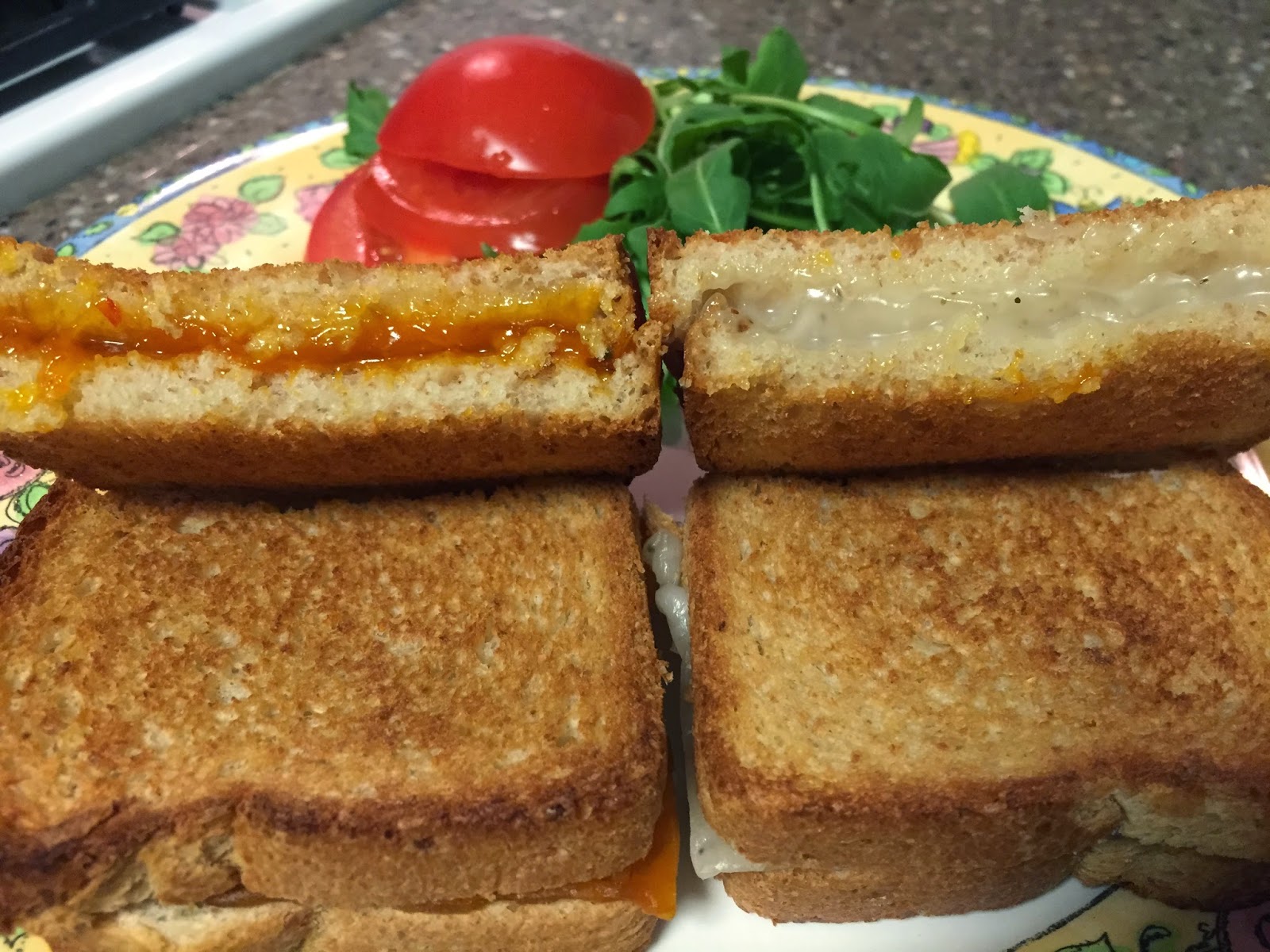 When I took my first bite, a good ten minutes since removing the grilled cheese from the oven, the cheese squirted into my mouth like liquid in a most unpleasant way. No matter how long I let the sandwich sit, the cheese remained less viscous than I would have preferred- a consistency that prevented me from noticing anything else. 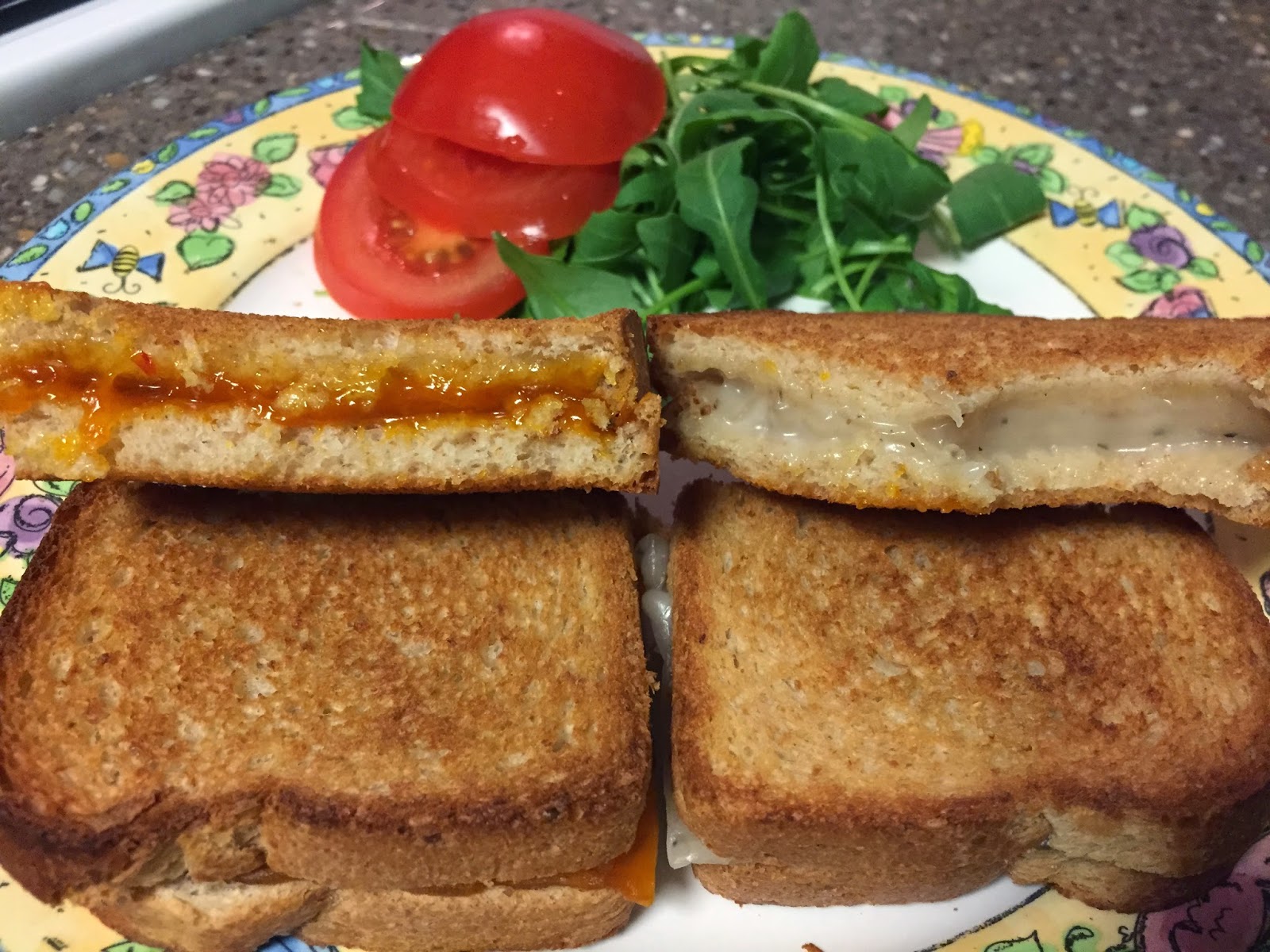 Undeterred, the next day I decided to get back to basics and try the slices plain. I had the same reaction as 89; the tomato cayenne had an amazing enough taste for me to look past the texture that wasn't authentic for me. I was less impressed with the coconut herb flavor, however, and found it to be a little on the rubbery side- something I hadn't noticed with the tomato cayenne. 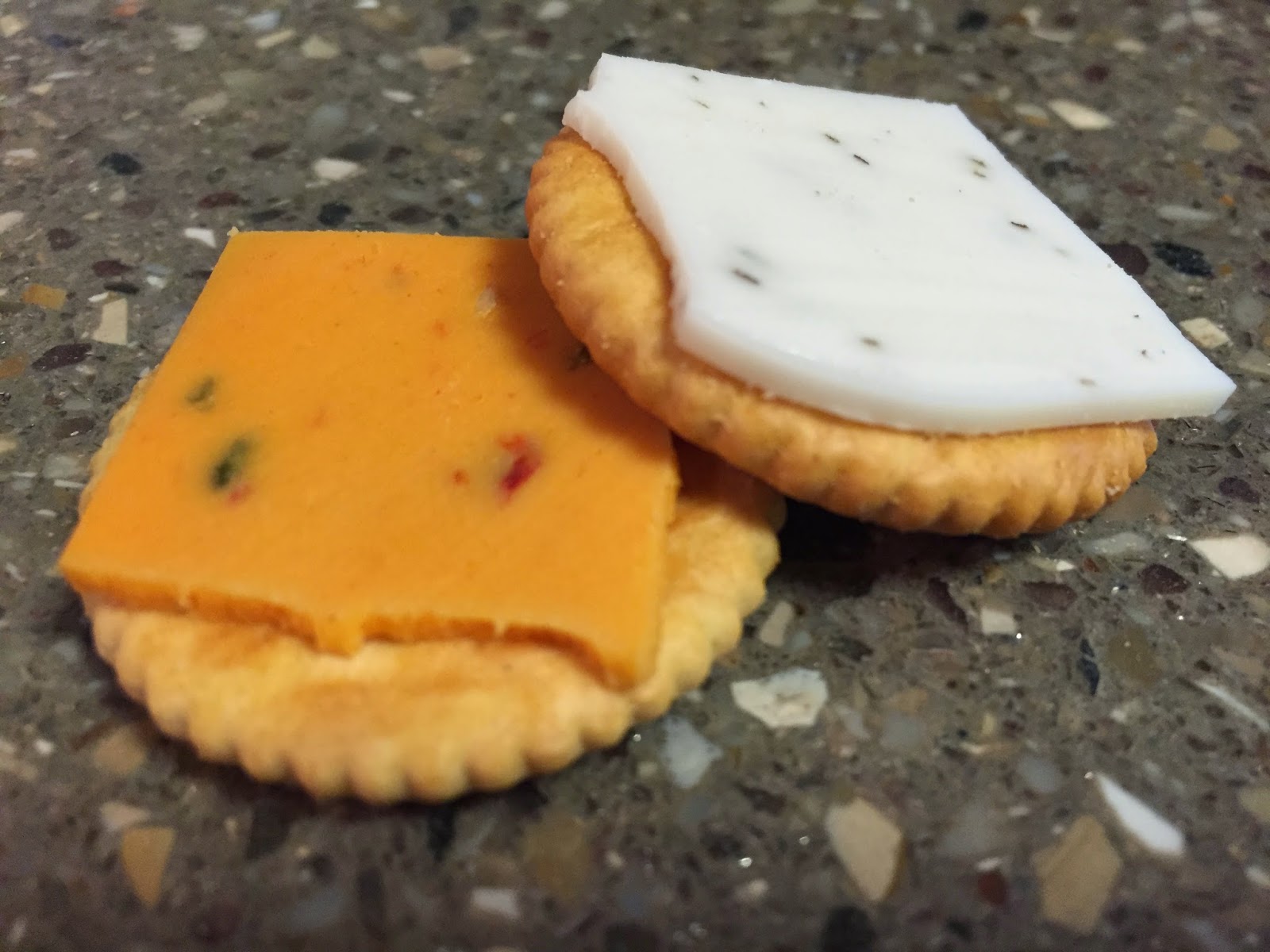 When I made a second sammie I knew I wanted to cook the cheese less in the hopes of keeping it in solid form. I pre-toasted the bread a little (I like it toasty) and then melted the cheese on it for 8 minutes at 350 degrees. That did the trick. Melted this way it remained sufficiently solid and, served with the obligatory arugula and tomato as well as tomato soup, this was a major improvement over the previous attempt. The tomato cayenne flavor is totally spicy and delicious, but there's still something un-cheesy about the texture that I can't quite put my finger on. I want to love it but there is definitely a roadblock. 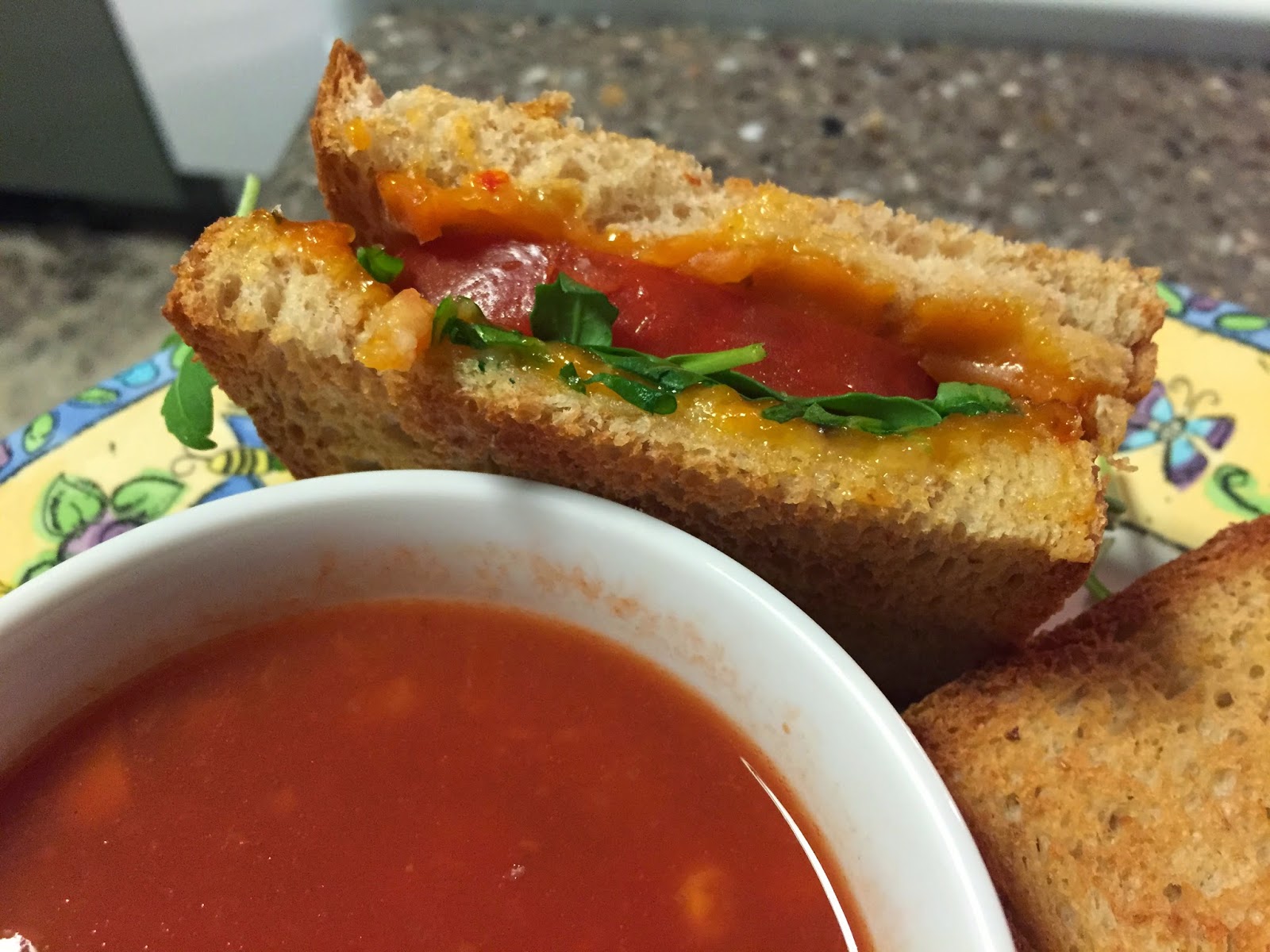 Next I decided to have an un-melted sammie with the coconut herb, arugula, and veganaise. It still just didn't do it for me. I might even go so far as to say it was a little pasty. 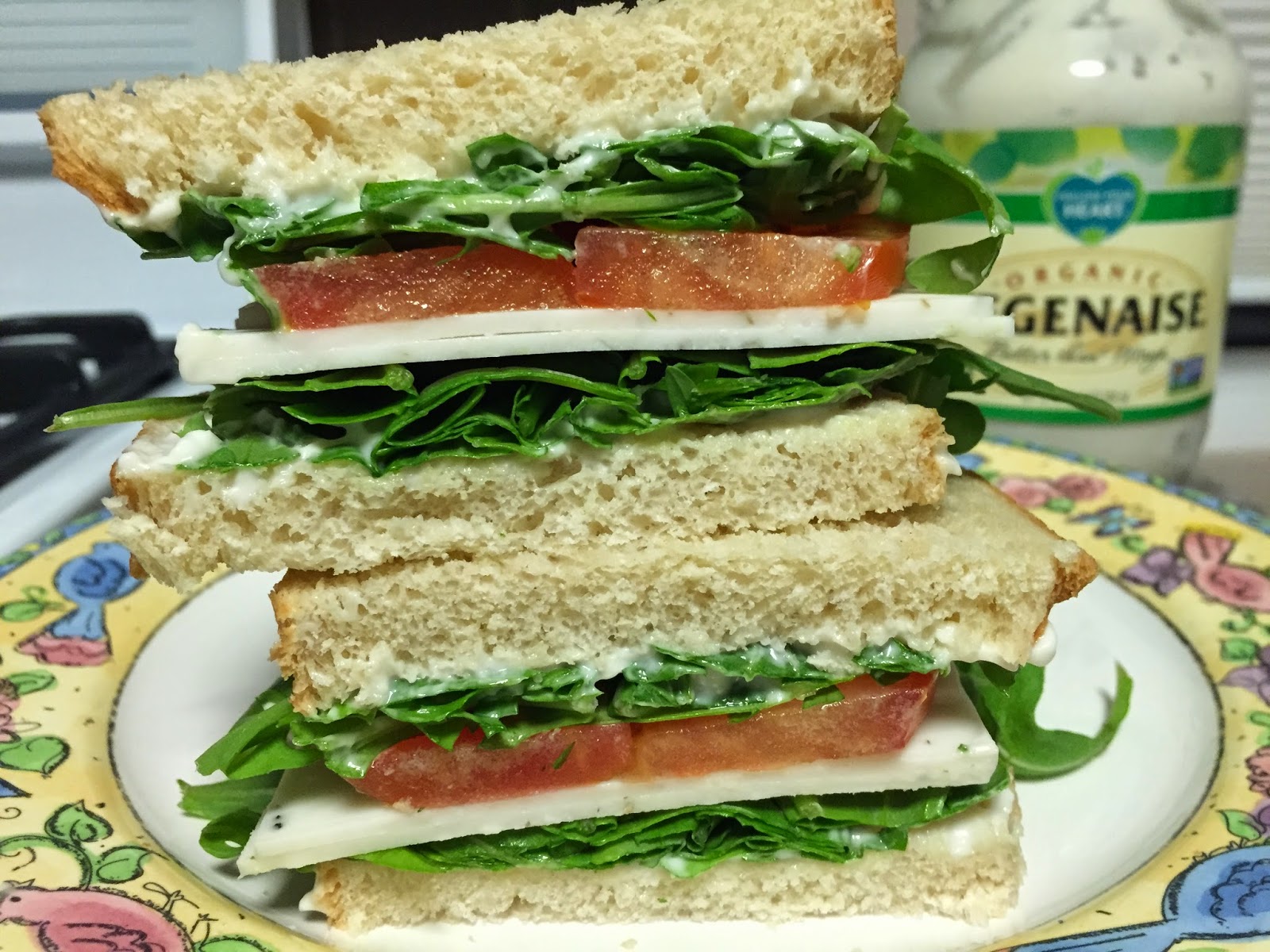 Ultimately, I finished up my preferred flavor, tomato cayenne, with another grilled cheese. I accidentally left it in a minute too long and wound up with another liquidy sandwich. I take full responsibility for this- particularly because I was aware of the issue and I should have been more careful, but frankly I can't deal with such finicky cheese! 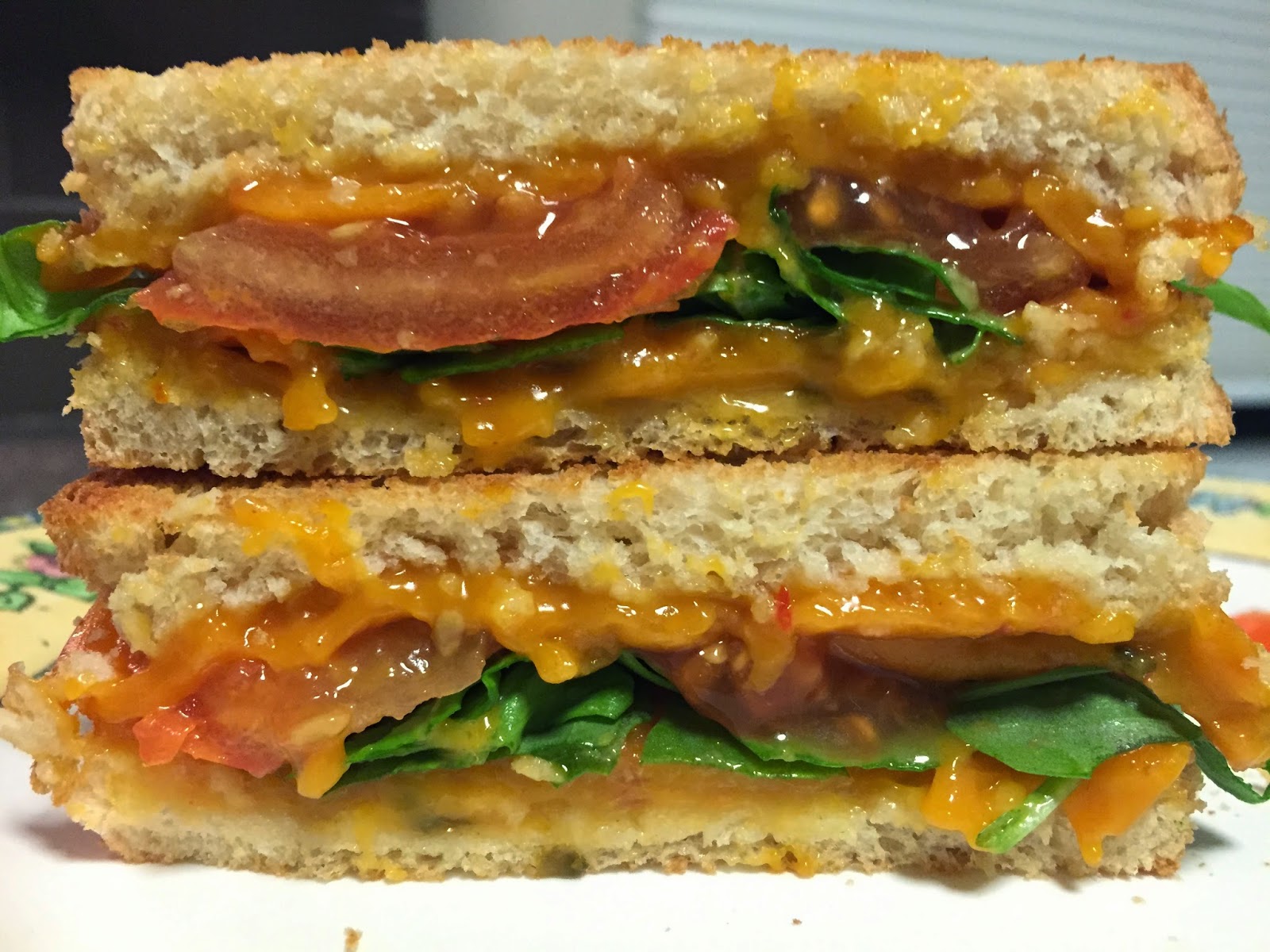 In the time it's taken me to formulate this review, I've heard most people raving about the flavor that I neglected to buy: creamy original. Perhaps that's the missing link in all this? I'll give it a go next time I find it and will report back.

I do want to stress, though, that this is not a bad review. And that? Not a disclaimer. This just happens to be a product I didn't love, but I'm weighing in anyway because I'm an unfiltered blogger; it's what I do. I am 100% a fan of Field Roast as a company- both because I really enjoy many of their products and because I respect them as an ethical company.

Every once in a while there's some blogger backlash over "bad" reviews not being helpful to the vegan community and I just wanted to chime in that this type of admonition is misguided, in my opinion- particularly in the vegan community. Who says vegans have to love everything vegan? We don't. It's not giving your opinion that's bad for veganism; it's the actual bad vegan food, bad vegan service, and bad vegan products that are bad for veganism.

In this case, it's not that I think the chao cheese is bad; it's just not for me. And this is not to say that I wouldn't tell you if something was bad (duh) or suggest that you must believe something is bad because I deem it so. But I'm guessing you already knew that.

That being said, feel free to let me know if you love chao, because judging by my social media feeds I'm definitely in the minority!