I lived on tofu pups most of my vegetarian/early vegan life and then last year they stopped doing it for me.  Perhaps I'll revisit them eventually, but in the meantime I was missing the excuse to pile a fresh bun full of spicy mustard, sauerkraut, and relish.  Then Vegan in Brighton showed off these impressive wieners and I could hold out no longer: I went to find myself a replacement hot dog.  I'm not usually into fake meaty things; with hot dogs it's all about the condiments for me.  These were so authentic looking that they practically jumped off the shelf: Field Roast frankfurters.  I know the "vegetarian" designation is confusing, but I confirmed with the prompt and friendly folks at Field Roast that ALL of their projects are, indeed, VEGAN. 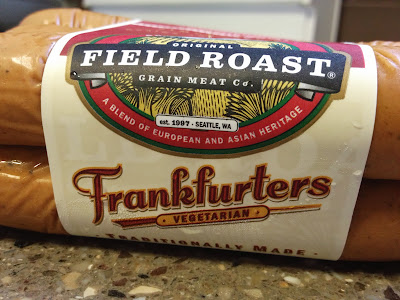 When I went to open the package, I was genuinely surprised to find that they were individually wrapped franks: strung together like sausage links.  They say that people tend to look like their companion animals; this was pretty much my expression, "Huh?" 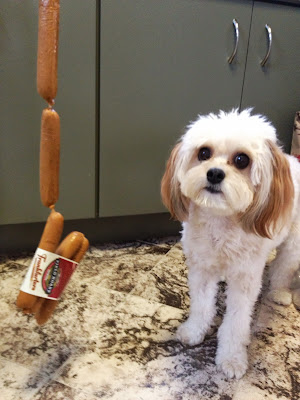 Nevertheless, I peeled one (released it from the packaging?- both sound weird; I'm sorry); cooked it in a lightly oiled frying pan on low heat for ten minutes, as directed, and voila: a frank feast. 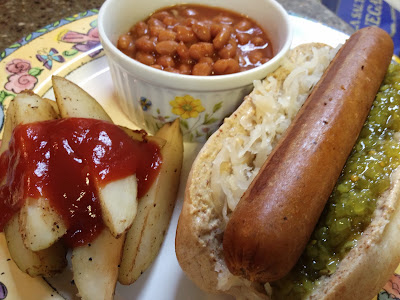 If you're familiar with some of the other brands of faux franks on the market, you'll understand what I mean when I say that this weenie really filled out the bun impressively.  I generally hollow out my bun in order to fit in as many toppings as possible, but even with doing so this was a formidable mouthful. 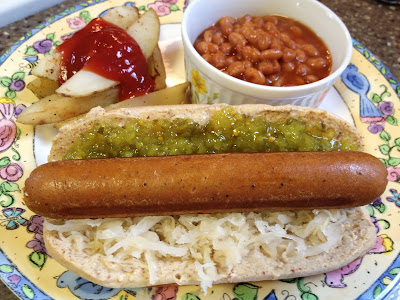 I admit I have little recollection of what non-vegan frankfurters taste like, but the Field Roast franks have a distinct bologna quality that seems just about right. 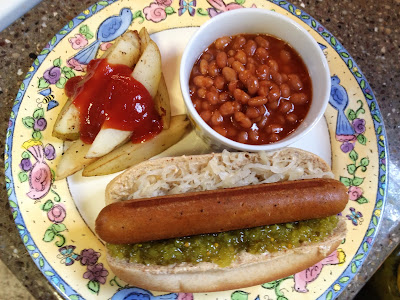 After I'd eaten four franks in five days I had to admit I was hooked.  The other two are in the freezer for future indulgence.

As for 89, I don't know what it was about these weenies, but she was extremely interested in them. 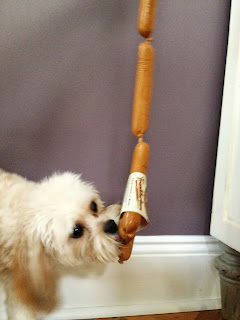 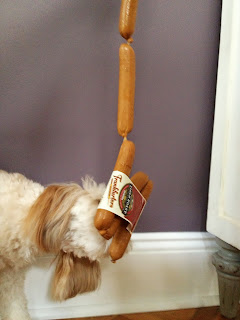 Maybe it was the cartoon-esque links?  She didn't eat any, though: the thought was just too cannibalistic for me to consider.  Also, more for for me!
Posted by Abby Bean at 7:17 AM