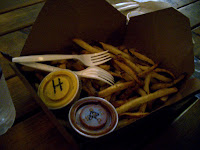 Let me start with literally our first stop from the airport (with luggage!): the much anticipated food carts: Potato Champion and Whiffies. If you've ever been to the Rutgers Campus in New Brunswick, imagine the parking lot that houses the infamous grease trucks...only much swankier and inherently more festive.

POTATO CHAMPION: Much like our beloved NYC Pommes Frites, Potato Champion serves Belgian Fries with assorted vegan and non-vegan sauces, only it’s a cart instead of a jam-packed, miniscule restaurant with an everlasting line out the door. Coincidentally, Potato Champion buys its paper fry cones from Pommes Frites, but they can only serve them that way if you are taking your fries to go. Reason being: while the seating is abundant (outdoor, covered, lit with fairy lights), they are no fry cone holes in the table! What’s up with that, Potato Champion? We regaled our Portland dining companions with stories of these heavenly, NY fry cone table holes while we dug into our fries from within a recycled to-go container a la Whole Foods. They seemed up for it, so get out your drill Potato Champion: your delicious contribution to the potato-loving world wants to be displayed in all it's glory whilst being devoured.

The verdict: I though the fries were fantabulous. I found them more potato-y than Pommes Frites. Although she thoroughly enjoyed the Potato Champion version and ate her fair share, my traveling partner decided that she ultimately prefers the more crispy Pommes Frites version. It is the classic dilemma between a latke and a tater-tot. Those who adore potatoes prefer the latke ratio of potato to crisp, while those who prefer the crisp adore the tater-tot over-proportion of crisp to potato. Simple tot logic if you will.

There are plenty of sauces to choose from at Potato Champion, but they were out of the horseradish ketchup that I was looking forward to (boo). When I lamented its crossed out existence, the gentleman in the cart asked me why I didn’t just make my own. Ouch. I defended myself with the fact that I’d just flown across the country and didn’t think of it; he seemed to accept that as a plausible excuse. So, instead we tried the Rosemary Ketchup (one vote for, one against) and the Hot Sweet Mustard (opposite opposing votes). We decided that if we made it back before the end of our trip we would be satisfied with plain ketchup and a truckload full of Portland’s own: Secret Aardvark Habanero sauce, which we discovered here. A word about Secret Aardvark sauce: GET IT! This is the best hot sauce I’ve ever had. Henceforth I will use Melinda’s XXX habanero as a hot sauce, but Secret Aardvark as a condiment. Oh, for the love of yum.

WHIFFIES: Whiffies is a cart that serves only fried pies. Yep, fried pies. Imagine a fried-to-order, giant, half-moon shaped pie boasting a thick, buttery (vegan) shell, tastewise: kind of like what I remember of the warm apple pies from McDonald’s, but infinitely better . So, they have all kinds of vegan, non-vegan, savory and sweet flavors to choose from and their menu board suggests you tell them if you’re vegan so they can cook your vegan pies in the vegan fryer (I guess if they’re busy they aren’t that picky unless asked). So, since the delicious Potato Champion served as our dinner, we decided to go for sweet pies as dessert. Portland Marionberry, Coconut Crème, and Peanut Butter Chocolate Chip to be exact.

Here’s the thing about Whiffie’s pies. They look big enough, but once you start eating them they become insurmountable because the crust is so rich. I can eat a dozen Vegan Treats donuts at a clip, yet I couldn’t possibly have consumed much more than one whole Whiffies pie. Don’t get me wrong, they are delicious; but, pace yourself.
The ranking: Coconut Crème was a delicious, thick, coconut pudding. In an effort towards conserving stomach space, I split the pie open and ate it like pudding with the occasional accompaniment of the super crispy edge of the crust: the best part, IMHO. Marionberry was the quintessential Portland pie. A little less sweet and less mushy than blueberry, this is probably THE fried pie to get; pure fruity pie goodness in your tummy. And, finally, the Peanut Butter Chocolate Chip: a delicious, fried ode to my favorite combination. A little more puddingy than I anticipated: this was the pie I chose to eat in its entirety and would again.

Note: Although I was very stuffed, I did intend to try a crepe from the Perierra Creperie. Unfortunately, I didn't find their menu very vegan-friendly and the options that were veganizable weren’t floating my boat. After I decided to eat my weight in pies instead of trying a crepe I saw a couple go by. Instead of soft, rolled crepes I’m used to, these were giant, stiff crepes that were folded for consumption. Like I said, I didn’t taste one, but it didn’t seem like my cup of tea.
Posted by Abby Bean at 5:06 PM