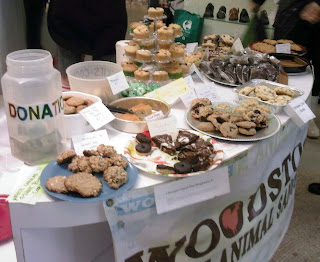 This past weekend I had the pleasure of attending the Vegan Bake Sale benefitting the Woodstock Farm Animal Sanctuary at MooShoes.  Having never attended a bakesale, I had no idea that it was going to be such a monumental event.  Framed by rows of beautiful vegan shoes and handbags, every available bit of floor space was taken up by large tables covered in an extremely varied assortment of beautiful baked goods flawlessly presented.  The sheer magnitude of the generosity was evident, and the offerings were literally irresistable.

The always generous Sweet and Sara donated packaged marshmallow assortments and individually wrapped s'mores for the cause.  Relative newcomer Cafe Terri sent along their perennially friendly staffer, Sarah, to volunteer, along with shop favorites: oat date bars and mocha chip brownies.  Cocoa V was represented by cupcakes and chocolate chip cookies.  But perhaps most incredible was the feast of goodies that had been charitably donated by an apparent army of vastly talented, selfless bakers. 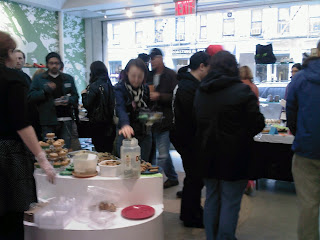 Cookies, cakes, scones, brownies, bars, muffins, danish, cupcakes, biscotti, and even a ciabatta loaf and pepperoni pizza pretzels!  The hungry crowd was shopping and chewing...and shopping some more.  The faster goodies were sold, the faster they were replaced by a seemingly endless stream of donations of baked goods in every shape, size, color, and flavor; it was hard to keep up with the selections.

Kind souls Jenny, Doug, Rebecca, and Stevie were all on hand during the festivities representing the well-deserving Woodstock Farm Sanctuary.  They were clearly touched by the outpouring of support from the vast crowd which was deftly handled-- per usual-- by the volunteers and MooShoes' staff.

This was my booty; I'm pretty sure you can figure out what's what: 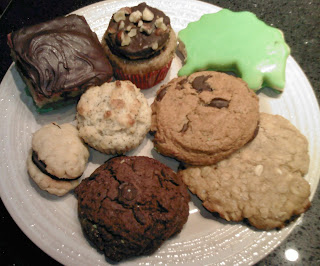 Tri-color/"rainbow" cookie: I haven't had one of these for ten years, so I was super excited to finally get my hands on a vegan version.  It was incredible and I'd love to know what patient, detail-oriented genius created it (extra points for the two colors of jelly!).  The esteemed tasting panel chose this as the hands down, collective favorite item brought home from the bakesale. 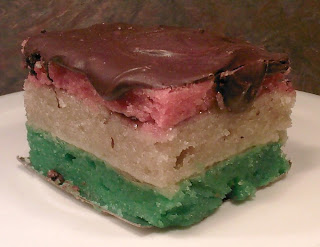 Psychedelic green dinasaur iced sugar cookie: Yes, it's missing it's tail and head; I'm only human, people!  It tasted even better than I could have imagined; I should have bought a purple one too!  Easy 2nd place.
Peanut butter, white chocolate chip, oat cookie: I was mesmerized by the peanut butter/white chocolate chip combo, but if I had realized that this cookie contained oats I wouldn't have selected it.  It wound up being a very happy accident, though, as the oats were super crisp and lent an unexpected and highly delicious crunch to the already ridiculously tasty cookie (Evan McGraw's creation).

Double chocolate chip cookie: Like a freezing cold sunny day, this cookie was deceiving: it did not live up to it's visible chocolateyness in the least (Cocoa V).
Chocolate chunk cookie: Beautiful, soft cookie full of chocolate chunks, but the cookie had absolutely no taste (Cocoa V).
Chocolate hazelnut cupcake filled with mocha cream: Gorgeous and impeccably presented, this cupcake hit each flavor mark.
Minano: As a longtime Milano fan, I was disappointed that these cookies were so heavily laced with citrus (No fruit in dessert, people; how many times do I have to say this?).  However, my bakesale companion thought it was a really nice accent and highly enjoyed them.
Lemon poppyseed muffin with pastel Whizzers: Where oh where were the advertised Whizzers?  False advertising!  I cannot review!

These goodies are not pictured because they were admittedly eaten in a frenzy of excitement (and goodwill!) before they could be photographed:

Twinkie: completely moist, yummy, and filled to capacity with cream.  As a bonus, it even boasted the three requisite cream punctures on the bottom!  Extra points for authenticity.
Chocolate peanut butter pillow: deliciously peanut buttery and a much better version than I could ever make; this was my peanut butter fix for the event.
Chocolate-covered mini-donut: completely adorable, and also available with sprinkles.

Raspberry danish: My bakesale companion and I agree that this was the favorite item consumed at the bakesale.  I thought to photograph only the final bite, so I went back to snag a picture of the plate because I wanted to give Evan an appropriate shout-out.  I actually hadn't remembered what a danish was until I tasted this...and then I wondered why I hadn't thought about them more often since becoming vegan.  Evan's repertoire is clearly varied (cookies, danish, banana bread, etc.) and I am as impressed with his execution as I've always been of his droolworthy photos. 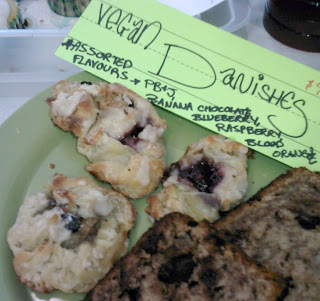 The overwhelming vibe of the event was truly sweet charity: the sheer deliciousness of the goods really shined, but lest I not forget to applaud the extreme generosity of all of the bakers who submitted donations, as well as the kind-hearted folks who were there to buy and enjoy them all.  I can't think of a better way for vegans to come together for a wonderful cause.

Extra credit to MooShoes for having this cool sign posted in their window: 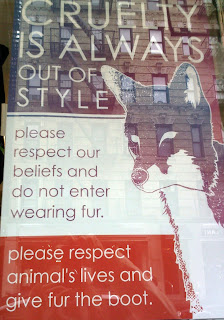