Terri Wows Us in the Flatiron District

Recently we found ourselves hoofing it over to the new vegan cafe in the Flatiron district, Terri, to check it out. We had just eaten dinner, so we were really just planning to show our moral support for the newest vegan eatery on the block (I'm lying, I knew I was having a shake no matter how full I was from dinner). 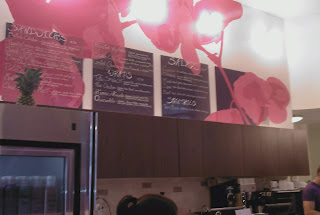 We were instantly impressed by the inviting space: bright, open, clean, and appetizing; we had to grab something. Really, it would have been rude not to.

The staff was refreshingly warm and friendly without being at all phony or elitist in any way.  The person who helped me even let me choose my preferred cupcake from the batch (swoon!).  In addition to the scrumptious sounding made-to-order menu offerings, the fridge was packed with fresh juices, prepared salads, etc.: presumably for customers who need to literally grab and go.

While we didn't have any "real" food ourselves, the sandwiches that were being presented to our fellow customers were looking mighty good; the bacon cheddar chicken ranch is on my list for the next visit, with my companion eyeing the chickpea tuna melt.  This trip, however, was all about dessert.  The chocolate cupcake with vanilla bean frosting was moist & yummy, with refreshingly soft-- not stiff-- frosting (did we detect a hint of banana?).  The chocolate chip (mocha?) brownie was more like a very dense and chocolatey cake: very filling.  I will note that it was kind of strange eating these items off of recycled paper towels, as the cafe doesn't seem to offer plates (!).  **update 3/11/10: Terri says plates are coming! 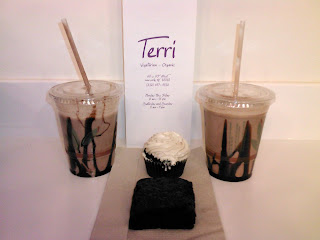 More importantly though, let's turn our attention to the shakes.  I don't know about you, but when I read a menu that includes smoothies I'm thinking one thing: there had better be a chocolate peanut butter option that is simply masquerading as a "smoothie".  Well, Terri goes one better.  In addition to their assortment of smoothies, they offer six (!) varieties of SHAKES: chocolate, vanilla, strawberry, java, Butterfinger, and chocolate peanut butter; rejoice!  Of course I had the chocolate peanut butter shake and it was delicious.  You know how some places are super-stingy with the chocolate and especially the peanut butter in shakes, smoothies, etc.?  Not Terri!  The shake was delicious and exactly as advertised (i.e., sufficiently chocolatey, peanut buttery).  But shockingly, my companion had the Butterfinger shake and it was EVEN BETTER!  Tasting like Butterfinger deliciousness multiplied by 1000 and turned into a shake, this is clearly the star of Terri.  I asked the counterperson who made both delicious shakes how they pull off the Butterfinger.  Surprisingly, he explained that the contents are chocolate, peanut butter, and cookie dough.  I'm not sure how that equals Butterfinger, but my tastebuds don't lie.  These are the goods, people.

It is wonderful to welcome Terri's refreshing cafe to the otherwise lackluster barely existent midtown landscape of fairly-priced vegan eats (I still love you Maoz & Chipotle).  And, for the record, many more upscale, vegan, dining options in the city would do well to take note of Terri's warm staff, fair prices, and overall welcoming vibe.  I will be back!

Note: watch yourself on their minimalistic stools; they're a little wobbly and you don't want to fall on your butt and risk wasting any of your goodies.  Bones heal, but a cupcake on the floor is ruined for good.
Posted by Abby Bean at 11:18 AM