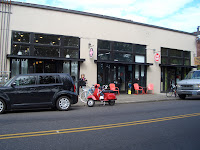 After our whirlwind tour of Food Fight, Herbivore, and Scapegoat, we were looking forward to the veritable feast of sweets that was surely awaiting us in the famed Sweet Pea Bakery. We were on such a high from our experiences in the other three stores and were looking forward to completing our vegan mini-mall experience with a relaxing nosh. Unfortunately, our jolly good time came to a screeching halt.

Each of the other stores had been quaint and charming in their own way, but Sweet Pea was cavernous and barren. The visible kitchen in the "back" was huge, but the counter's display case wasn’t very full. Worst of all, though, was the glare that we were greeted with, as if we were interrupting something. I said hello and received a smile-less nod in response. I wasn’t overly impressed by the offerings in the case; surprisingly, many cakes looked dry and not necessarily fresh. But then I saw the Charlie Brown. I had heard of this creation, but had no idea it was a peanut butter and chocolate concoction. I immediately ordered it, along with a scone, a biscotti, and two lattes to share with my traveling companion.

While the counterperson was gathering up our goods I excitedly asked if she knew what Sunday’s brunch was going to be; her response was to shake her head no. I uncomfortably asked if it was too early in the week to inquire (it was Thursday) and she barely shrugged. Hmm, isn't part of being in the service industry talking to customers? You know, actually speaking with your voice? Although the brunch had been on our list for Sunday months in advance, my companion and I exchanged defeated glances that confirmed the agreement of what we were both already thinking: "we are not coming back here". It’s one thing not to be a conversationalist, but the blatant unfriendliness immediately and completely spoiled the visit. I’m guessing she isn’t the person who tweets all the friendly messages about daily muffins and special offers for jokes that make her laugh. I have no tolerance for unnecessary and unwarranted rudeness.

So, onto the food.

For starters, I was immediately disappointed to have been handed the sloppiest mocha I have ever seen. Forget an artful finishing design on top- it was sloshing out of the cup onto the saucer as it was handed it to me: not exactly the vision of the beautiful SweetPea lattes I’d seen blogged and bragged about on Portland blogs. I bit into the Charlie Brown first and it was decadent: a crispy, crunchy layer topped with a thick peanut butter layer, topped with a thick dark chocolate layer- absolute deliciousness. Unfortunately, it was then that I looked over at the vegetarian across from me who had tasted the chocolate chip scone. To my raised eyebrows she responded with dry mouth, “This tastes like what people think vegan food tastes like.” So, of course, I had to try it. It was completely tasteless and dry; as my companion noted, “They even managed to suck the taste out of the few, random chips”. Between my satisfaction with the glory of my Charlie Brown and her understandable misery from the disappointment in her dry blob, I knew I had to defer the pumpkin, white chocolate chip biscotti to her...but I tasted it first. As most vegan biscotti are, it was too soft for me, but it was fresh and delicious and the vegetarian happily munched on it in lieu of the tasteless triangle she had before her. I’d like to stress that the scone was the worst we’d ever tasted: so completely devoid of moisture and any taste whatsoever that we considered asking for a refund on principle (we didn’t); it was as horrible as the Charlie Brown was delicious. The only difference is that I expected Sweet Pea’s stuff to be delicious, never horrid.

I’m assuming this experience is a rare occurrence, but for somebody traveling from across the country it’s the only visit I have to go by. In summary, the Charlie Brown was, of course, FANTASTIC. The biscotti was good, the lattes embarrassing, the scone an abomination. But overall, it’s hard to ignore the slipshod, rude, mute service. Two thumbs down, I’m afraid. You can see why we cropped Sweet Pea out of the frame when photographing the illustrious mini-mall.
Posted by Abby Bean at 8:56 PM