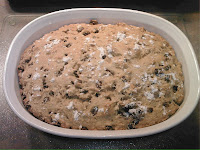 My vegetarian Mom eats very little dairy, but for some reason she can't resist buying non-vegan things like Irish Soda Bread for St. Patrick's Day and Hot Cross Buns in spring.  In my ongoing effort to veganize everything she craves so that she actually becomes vegan, I tried to re-create Irish Soda Bread.  With my copy of The Vegan Table en route, I turned to Vegweb for a recipe. 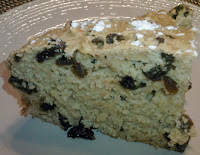 The visual result was impressive, but I found it to be a little more moist and cakey than the dry, dense bread I had expected.  Although it looks crumbly in the picture, it was downright spongey; my cakes should only come out this moist.  Not to mention that even though I had doubled the amount of raisins the recipe called for (chip habit), I could still detect an aftertaste of the tofu.  That was either in my head...or it wasn't.  And I couldn't ask anyone else what they thought because I never tell people when there's tofu in something because I don't want them to be skeeved.  I mean, it creeps me out and I actually like tofu (when it's not just a seemingly unrelated ingredient).  Drat. 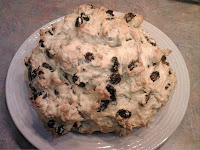 So then I tried the recipe in The Vegan Table and the visual results were confusing.  Initially I thought it looked really appetizing but then it occurred to me that was because it looked like a giant scone-- not Irish Soda Bread.  Reason being, it was all nook & cranny covered rather than the smooth non-vegan loaves I've seen my Mom bring home.  Hmmm.  That's easy enough to chalk up to baker error; perhaps there's an Irish Soda Bread smoothing technique I'm not clued in to?

As far as the taste, it was a cross between a buttermilk biscuit and a raisin scone: very light.  These aren't necessarily bad things, but neither is reminiscent of Irish Soda Bread.  Am I the only person seeing the humor irony in the fact that I am having this much difficulty getting a vegan recipe to come out dry and weighty?

Both versions were sufficiently tasty in their own right, but I am certain that neither would be confused for Irish Soda Bread in a blind taste test.  I realize I'm a novice and I've only tried two versions, but maybe this is just one of those things that can't be veganized authentically.  Do I care?  I've got ice cream and donuts and cakes and cookies.  I don't even think I'd ever even eaten Irish Soda Bread as a non-vegan, so it's not something I miss.  Yodels, however, are another story.
Posted by Abby Bean at 7:28 AM